An international team led by Princeton University scientists has discovered an elusive massless particle theorized 85 years ago. The particle could give rise to faster and more efficient electronics because of its unusual ability to behave as matter and antimatter inside a crystal, according to new research.

The researchers report in the journal Science July 16 the first observation of Weyl fermions, which, if applied to next-generation electronics, could allow for a nearly free and efficient flow of electricity in electronics, and thus greater power, especially for computers, the researchers suggest.

Proposed by the mathematician and physicist Hermann Weyl in 1929, Weyl fermions have been long sought by scientists because they have been regarded as possible building blocks of other subatomic particles, and are even more basic than the ubiquitous, negative-charge carrying electron (when electrons are moving inside a crystal). Their basic nature means that Weyl fermions could provide a much more stable and efficient transport of particles than electrons, which are the principle particle behind modern electronics. Unlike electrons, Weyl fermions are massless and possess a high degree of mobility; the particle's spin is both in the same direction as its motion — which is known as being right-handed — and in the opposite direction in which it moves, or left-handed.

"The physics of the Weyl fermion are so strange, there could be many things that arise from this particle that we're just not capable of imagining now," said corresponding author M. Zahid Hasan, a Princeton professor of physics who led the research team. 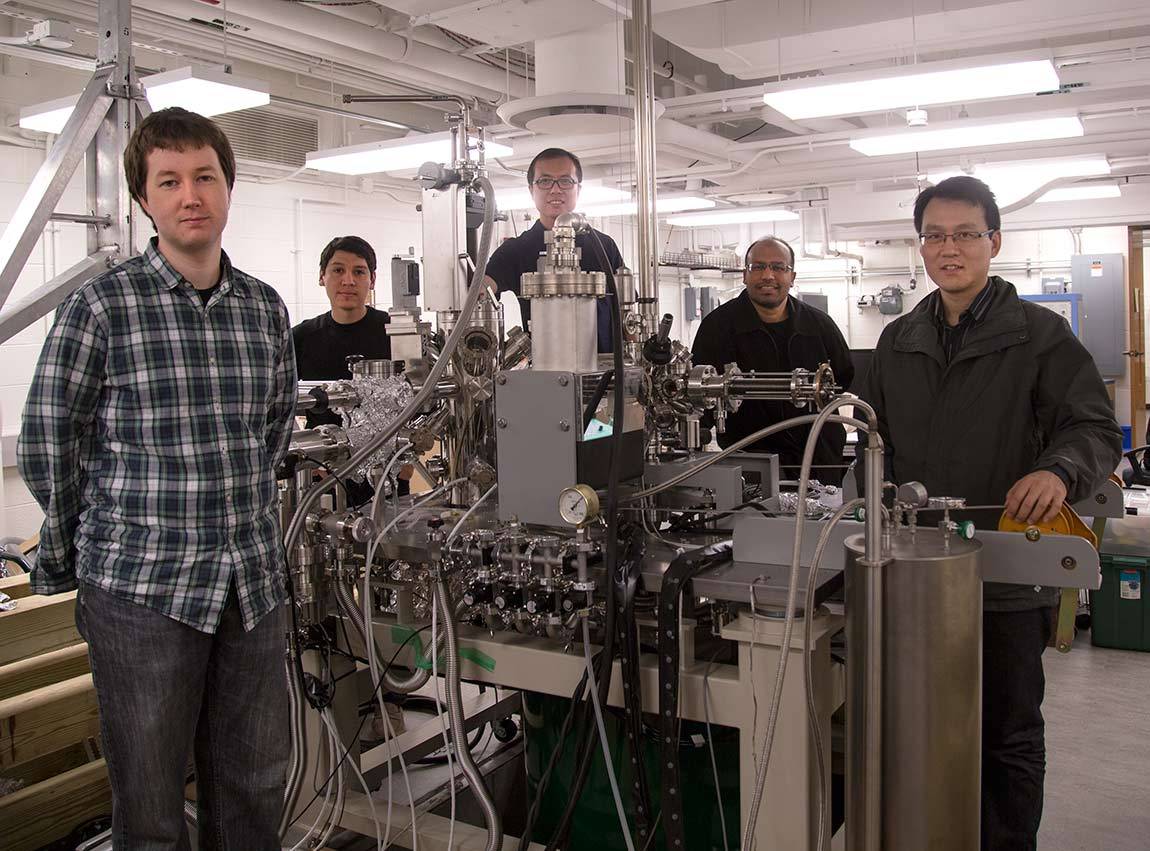 An international team led by Princeton University scientists has discovered Weyl fermions, elusive massless particles theorized 85 years ago that could give rise to faster and more efficient electronics because of their unusual ability to behave as matter and antimatter inside a crystal. The team included numerous researchers from Princeton's Department of Physics, including (from left to right) graduate students Ilya Belopolski and Daniel Sanchez; Guang Bian, a postdoctoral research associate; corresponding author M. Zahid Hasan, a Princeton professor of physics who led the research team; and associate research scholar Hao Zheng. (Photo by Danielle Alio, Office of Communications)

The researchers' find differs from the other particle discoveries in that the Weyl fermion can be reproduced and potentially applied, Hasan said. Typically, particles such as the famous Higgs boson are detected in the fleeting aftermath of particle collisions, he said. The Weyl fermion, however, was discovered inside a synthetic metallic crystal called tantalum arsenide that the Princeton researchers designed in collaboration with researchers at the Collaborative Innovation Center of Quantum Matter in Beijing and at National Taiwan University.

The Weyl fermion possesses two characteristics that could make its discovery a boon for future electronics, including the development of the highly prized field of efficient quantum computing, Hasan explained.

For a physicist, the Weyl fermions are most notable for behaving like a composite of monopole- and antimonopole-like particles when inside a crystal, Hasan said. This means that Weyl particles that have opposite magnetic-like charges can nonetheless move independently of one another with a high degree of mobility.

A detector image (top) signals the existence of Weyl fermions. The plus and minus signs note whether the particle's spin is in the same direction as its motion — which is known as being right-handed — or in the opposite direction in which it moves, or left-handed. This dual ability allows Weyl fermions to have high mobility. A schematic (bottom) shows how Weyl fermions also can behave like monopole and antimonopole particles when inside a crystal, meaning that they have opposite magnetic-like charges can nonetheless move independently of one another, which also allows for a high degree of mobility. (Image by Su-Yang Xu and M. Zahid Hasan, Princeton Department of Physics)

The researchers also found that Weyl fermions can be used to create massless electrons that move very quickly with no backscattering, wherein electrons are lost when they collide with an obstruction. In electronics, backscattering hinders efficiency and generates heat. Weyl electrons simply move through and around roadblocks, Hasan said.

"It's like they have their own GPS and steer themselves without scattering," Hasan said. "They will move and move only in one direction since they are either right-handed or left-handed and never come to an end because they just tunnel through. These are very fast electrons that behave like unidirectional light beams and can be used for new types of quantum computing."

Prior to the Science paper, Hasan and his co-authors published a report in the journal Nature Communications in June that theorized that Weyl fermions could exist in a tantalum arsenide crystal. Guided by that paper, the researchers used the Princeton Institute for the Science and Technology of Materials (PRISM) and Laboratory for Topological Quantum Matter and Spectroscopy in Princeton's Jadwin Hall to research and simulate dozens of crystal structures before seizing upon the asymmetrical tantalum arsenide crystal, which has a differently shaped top and bottom.

The crystals were then loaded into a two-story device known as a scanning tunneling spectromicroscope that is cooled to near absolute zero and suspended from the ceiling to prevent even atom-sized vibrations. The spectromicroscope determined if the crystal matched the theoretical specifications for hosting a Weyl fermion. "It told us if the crystal was the house of the particle," Hasan said.

The Princeton team took the crystals passing the spectromicroscope test to the Lawrence Berkeley National Laboratory in California to be tested with high-energy accelerator-based photon beams. Once fired through the crystal, the beams' shape, size and direction indicated the presence of the long-elusive Weyl fermion.

First author Su-Yang Xu, a postdoctoral research associate in Princeton's Department of Physics, said that the work was unique for encompassing theory and experimentalism.

"The nature of this research and how it emerged is really different and more exciting than most of other work we have done before," Xu said. "Usually, theorists tell us that some compound might show some new or interesting properties, then we as experimentalists grow that sample and perform experiments to test the prediction. In this case, we came up with the theoretical prediction ourselves and then performed the experiments. This makes the final success even more exciting and satisfying than before."

In pursuing the elusive particle, the researchers had to pull from a number of disciplines, as well as just have faith in their quest and scientific instincts, Xu said.

"Solving this problem involved physics theory, chemistry, material science and, most importantly, intuition," he said. "This work really shows why research is so fascinating, because it involved both rational, logical thinking, and also sparks and inspiration."

Weyl, who worked at the Institute for Advanced Study, suggested his fermion as an alternative to the theory of relativity proposed by his colleague Albert Einstein. Although that application never panned out, the characteristics of his theoretical particle intrigued physicists for nearly a century, Hasan said. Actually observing the particle was a trying process — one ambitious experiment proposed colliding high-energy neutrinos to test if the Weyl fermion was produced in the aftermath, he said. 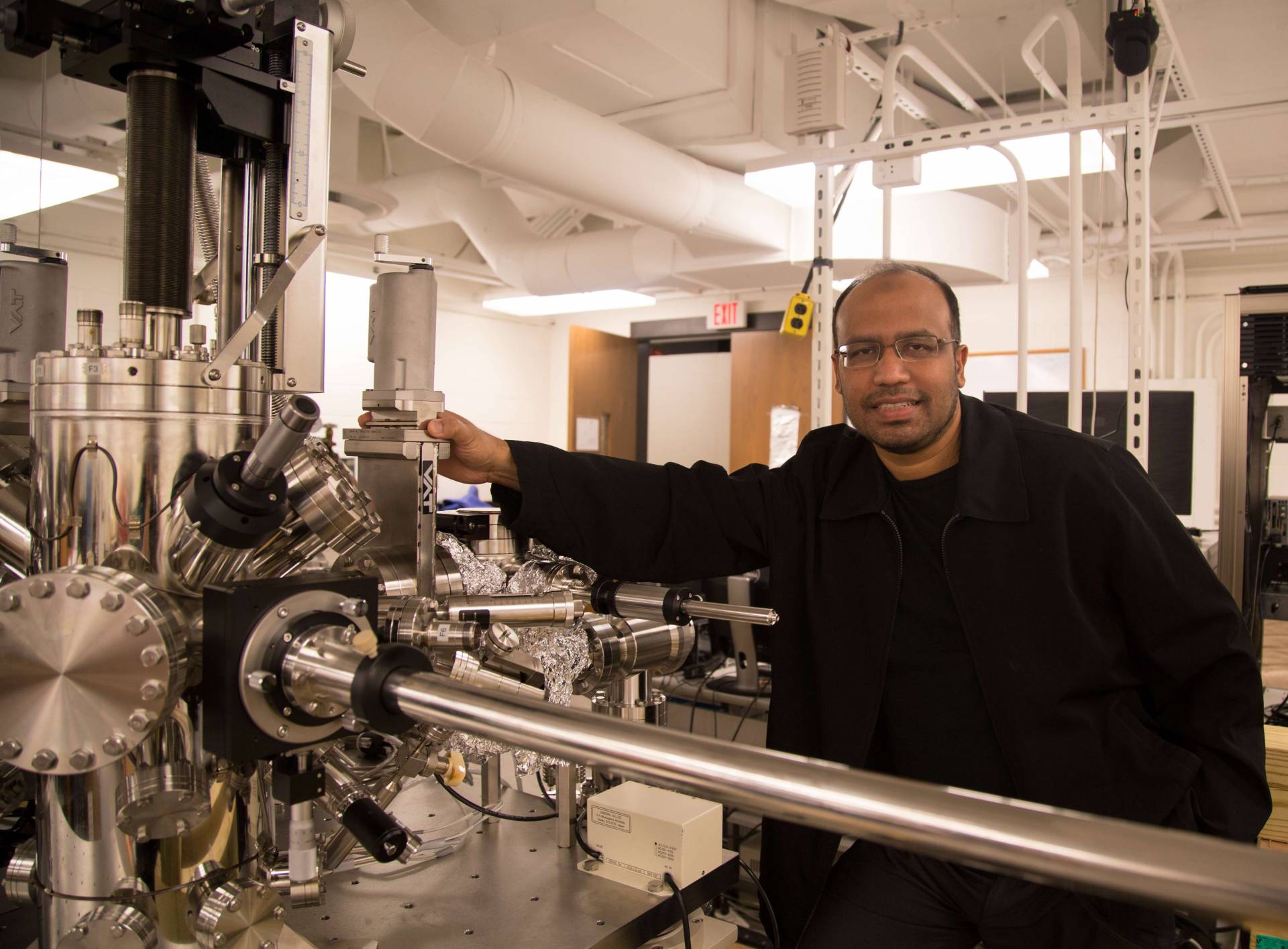 Hasan (pictured) and his research group researched and simulated dozens of crystal structures before finding the one suitable for holding Weyl fermions. Once fashioned, the crystals were loaded into this two-story device known as a scanning tunneling spectromicroscope to ensure that they matched theoretical specifications. Located in the Laboratory for Topological Quantum Matter and Spectroscopy in Princeton's Jadwin Hall, the spectromicroscope is cooled to near absolute zero and suspended from the ceiling to prevent even atom-sized vibrations. (Photo by Danielle Alio, Office of Communications)

The hunt for the Weyl fermion began in the earliest days of quantum theory when physicists first realized that their equations implied the existence of antimatter counterparts to commonly known particles such as electrons, Hasan said.

"People figured that although Weyl's theory was not applicable to relativity or neutrinos, it is the most basic form of fermion and had all other kinds of weird and beautiful properties that could be useful," he said.

"After more than 80 years, we found that this fermion was already there, waiting. It is the most basic building block of all electrons," he said. "It is exciting that we could finally make it come out following Weyl's 1929 theoretical recipe."

Ashvin Vishwanath, a professor of physics at the University of California-Berkeley who was not involved in the study, commented: "Professor Hasan's experiments report the observation of both the unusual properties in the bulk of the crystal as well as the exotic surface states that were theoretically predicted. While it is early to say what practical implications this discovery might have, it is worth noting that Weyl materials are direct 3-D electronic analogs of graphene, which is being seriously studied for potential applications."