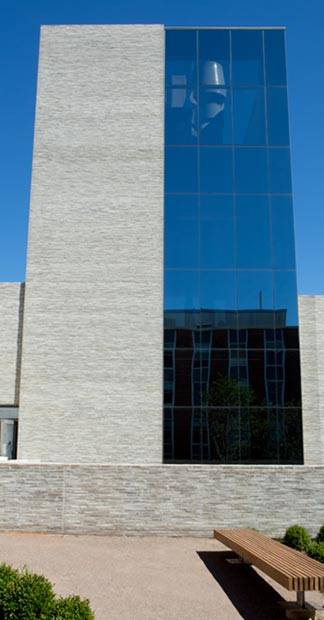 A major new building to house the Andlinger Center for Energy and the Environment is nearing completion, with staff and faculty set to move in late October and November. Located at the intersection of Olden Street and Prospect Avenue, the building weaves together laboratory, teaching and office space with a network of gardens in a park-like setting. The Andlinger Center's mission is to develop lasting solutions to energy and environmental problems and to prepare future leaders in these fields by drawing on a wide range of expertise and perspectives.

Meandering paths, sunken courtyards, trees, flowers and shrubs weave through the sculptural complex of gray brick and glass that has risen at the eastern edge of the Princeton University campus. After over three years of construction, the Andlinger Center for Energy and the Environment is about to open its doors, ushering in a new phase for the center's goal to develop solutions to ensure our energy and environmental future.

Laboratories, finely tuned for atomic-level investigations, will hum with the collaborative work of researchers from across the University as well as industrial collaborators. Specialized spaces will fill with faculty, students, postdoctoral researchers and visitors creating materials that help power cities, fuels that propel vehicles, and technologies that prevent and repair environmental damage caused by energy consumption.

"It's an extraordinarily beautiful building," said Emily Carter, the center's founding director and the Gerhard. R. Andlinger Professor in Energy and the Environment, who welcomed visitors to one of the first public tours of the building on Oct. 7. "What it offers is absolutely state-of-the-art facilities where people will want to come and work, and work together. My hope is the setting will be tremendously inspiring to all of the researchers and students who come to be educated here, to work together, and to help create a sustainable path for humanity."

University Architect Ronald McCoy said that the Andlinger Center's design reflects its connection to the rest of Princeton.

"The Andlinger Center teaches us how we can build a complex and sophisticated laboratory in a way that resonates with the traditions of humanism that anchor our experience of the Princeton campus," he said. "At Princeton, architecture and the landscape co-exist in a beautifully scaled relationship that sets the stage for human interaction. This is the essence of the design for the Andlinger Center — it is a contemporary building that carries forward the history of campus-making at Princeton." 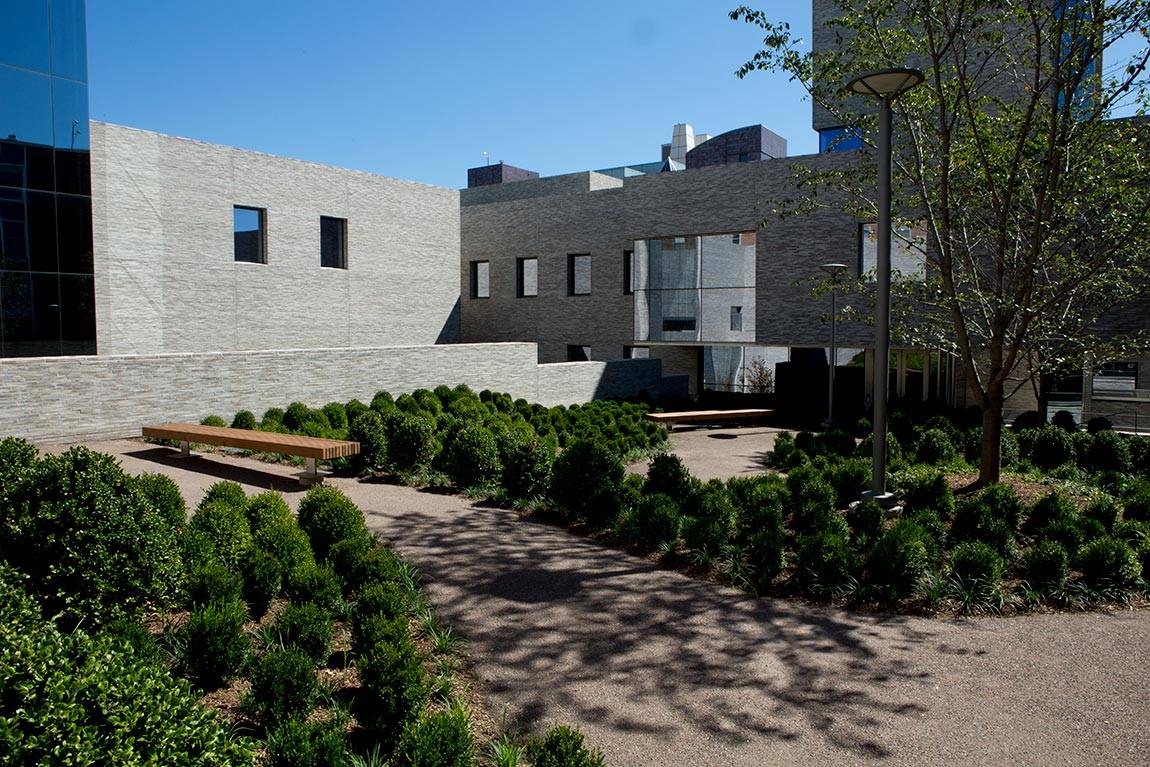 Designed by Tod Williams Billie Tsien Architects, the building creates an interplay of built and natural spaces that reflects the center's goal to integrate technological, economic and policy solutions with an overall environmental context.

The University created the center in 2008 following a $100 million gift from international business leader Gerhard Andlinger, Class of 1952. The center's mission, Carter said, is to preserve the planet through education and research on energy-related environmental issues and sustainable energy technologies such as batteries, building design, solar cells and biofuels.

Gerhard Andlinger, Carter said, has long been a believer in investing in sustainability and alternative energy technologies.

"We are incredibly grateful he had the vision to establish the center," she said.

Carter is positioning the center to be a research hotbed and think tank through its labs, educational certificates for students, publications and events that bring together policymakers, researchers and students. 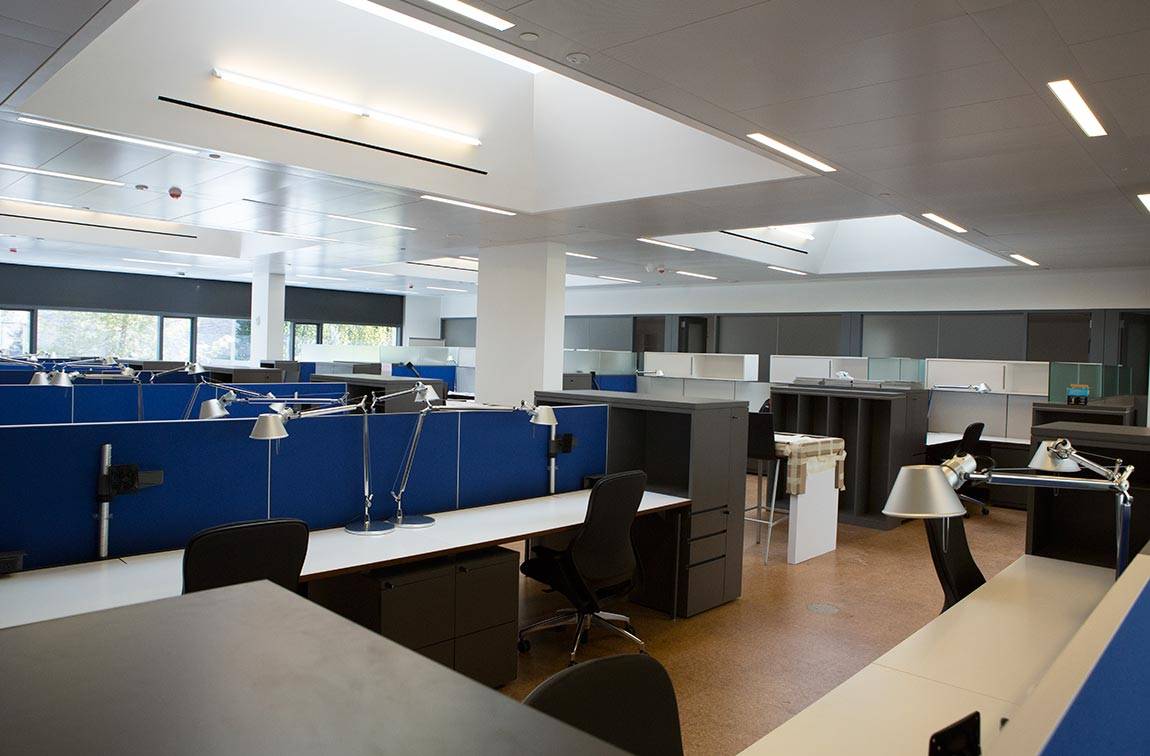 Despite much of the building being underground, many spaces incorporate plentiful natural light from low gardens and skylights. Office space for graduate students shown here opens to a park-like plaza that is below street level.

Designed to avoid a monolithic presence, the center appears to be several buildings. But it is actually one contiguous structure in its lowest level. Much like an iceberg, more than 60 percent of the building is below street level. While the building hunkers low in the landscape, its towers rise above the complex and light infuses the structure. Various spaces connect to gardens and three courtyards, which echo the University's ivy-decorated plazas.

A key feature of the building is the interweaving between the architecture and natural elements of the gardens, filled with trees and other plants.

"All of the spaces of the building are defined by the gardens. They are the source of light, orientation and identity," said McCoy.

McCoy also pointed out the materiality of the architecture — the gray brick, the sandblasted concrete and the soft felt wall coverings. These felt murals show enlarged, abstracted images from famous scientists' notebooks such as those of Albert Einstein and Marie Curie.

"The materials and craft of the Andlinger Center also recall the essential features of the campus," said McCoy. "The brick has a sense of modesty that is like the argillite stone of the Collegiate Gothic architecture. It is archaic yet contemporary. Inside the building, the public spaces are enhanced by materials, colors and fabrics that are almost domestic. They soften the technology of the laboratories and they support an intimate sense of community." 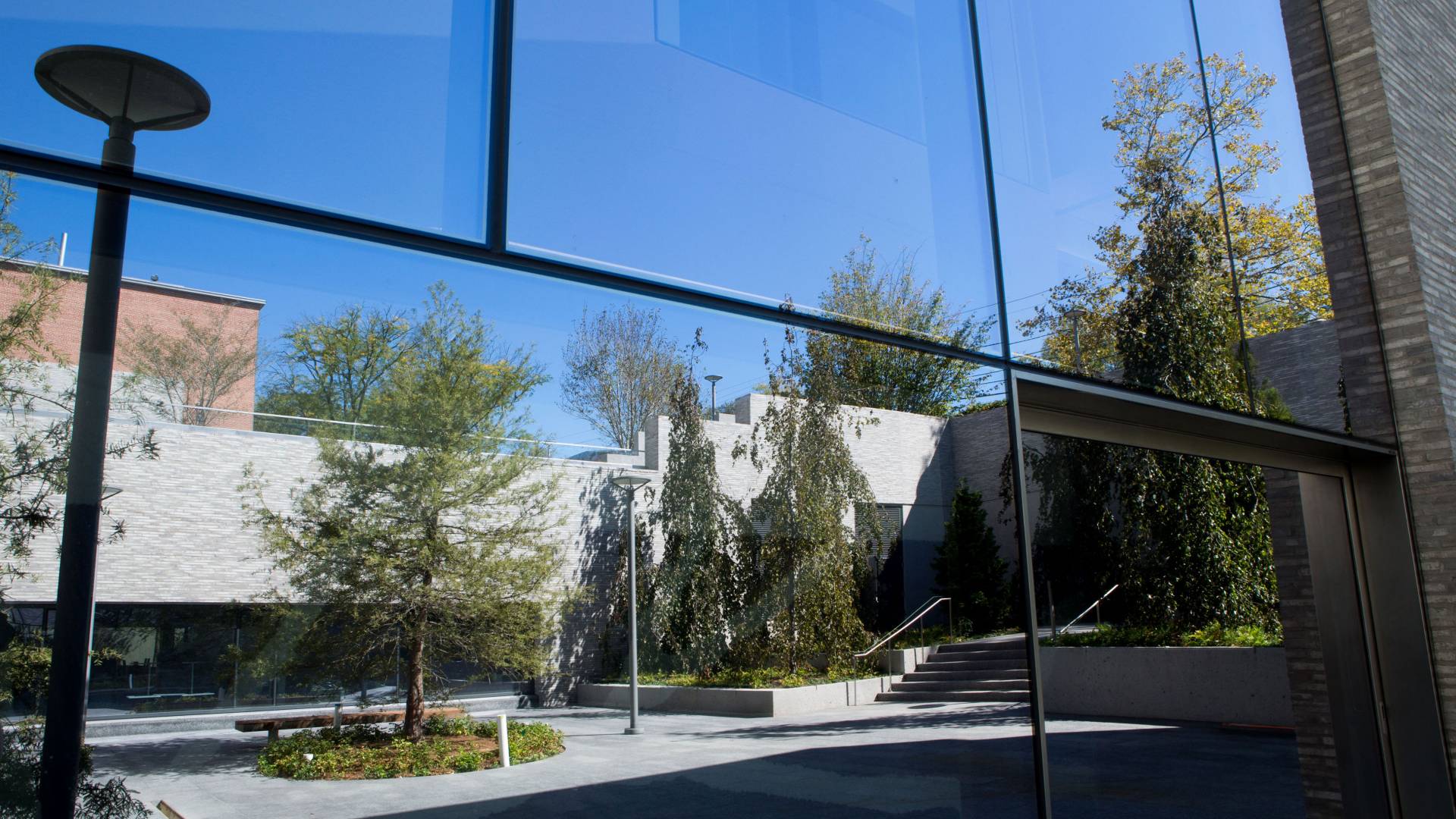 Visitors entering the Andlinger building at the corner of Olden and Prospect streets can walk down into one of several open spaces.

In the complex's lower spaces, an imaging and analysis center will contain powerful electron microscopes and other equipment. These instruments require shielding from electromagnetic interference. Even the center's elevators can emit a small electrical current — thus these spaces are cocooned in aluminum armor.

These microscopes are also situated on bedrock in order to minimize vibration. Researchers will be looking at materials at the level of atoms in these spaces and need as little movement as possible.

The Andlinger Center has 27,000 square feet of cleanrooms — spaces that have stainless steel ductwork that will filter and reduce airborne dust 1,000-fold for nanotechnology research and the creation of materials and devices, such as plastic-based solar cells or superconducting materials. These spaces roughly double the amount of cleanroom space at the University.

Research and teaching labs intersperse the building and can be easily reconfigured to suit the evolving needs of scientists. In a lower level, the research commons provide working space for 42 students and postdoctoral scholars. Two courtyards and large skylights overhead fill the space with light.

"I have always felt graduate students and postdocs are the lifeblood of any research operation in a university. So it's very important they have a really beautiful place to work," said Carter. The lecture hall is named in recognition of a gift from Paul A. Maeder, Class of 1975. It seats 208 and is shaped inside like a crystalline geode. Angled, faceted planes define the space while light filters through a skylight and a large window. 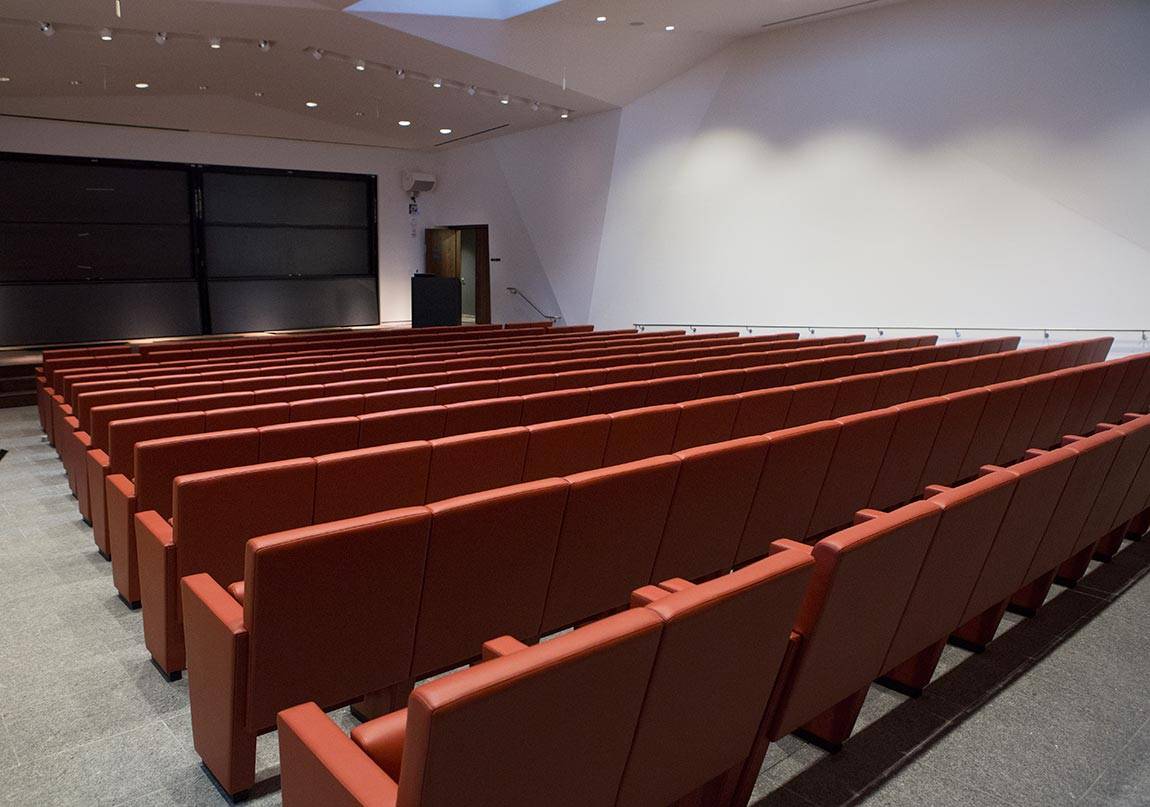 The building's Maeder Hall includes a 208-seat lecture hall and other classroom spaces that are accessible directly from the corner of Olden and Prospect streets.

The building's mechanics also reflect the center's mission to preserve the planet. An air-handling system relies mostly on the natural flow of air. To warm the building, a heat-recovery system harvests heat from exhaust air and reduces energy consumption. Green roofs filled with plants filter and retain rainwater, while insulating the structure. Built on bedrock, the ground also buffers the complex from swings in temperature. Bicycle commuters can even step into showers right off the center's main pathway.

Because of the complex's "green" design features, the structure is expected to meet the U.S. Green Building Council's Leadership in Energy and Environmental Design (LEED) Silver standards. 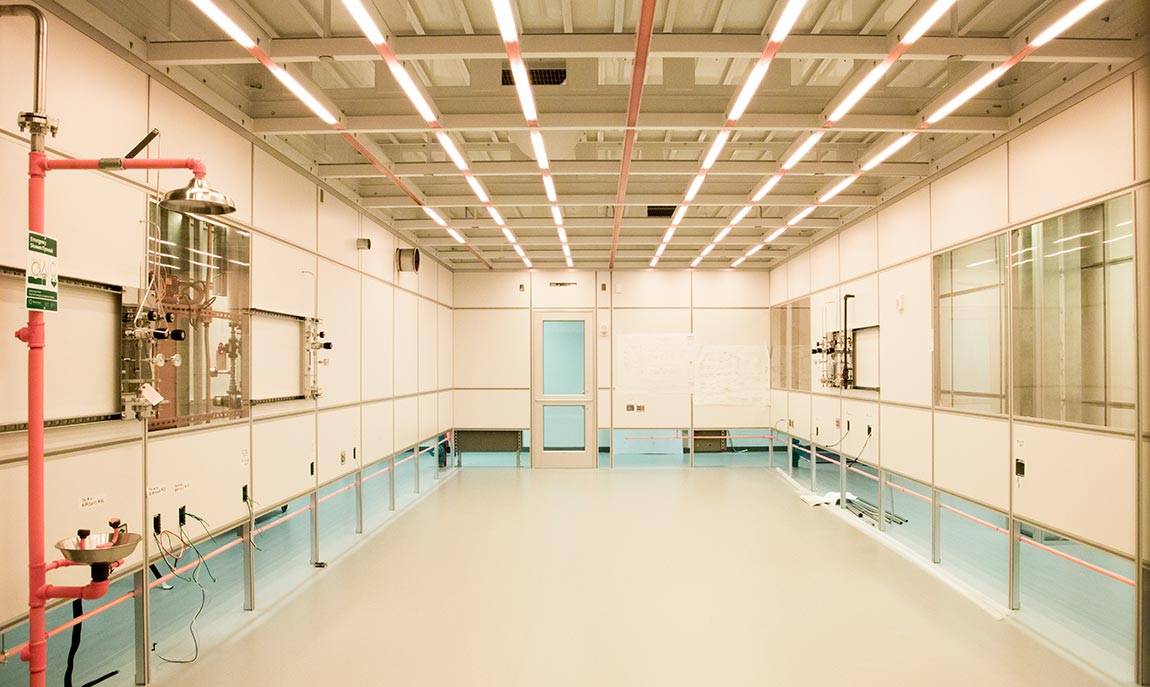 Among the most sophisticated laboratory spaces in the building are "cleanrooms," so-named because they reduce the level of dust in the air by 1,000-fold to facilitate work on nano-scale materials and devices that would be disrupted by even small amounts of dust.

Before the building's construction, faculty members connected with the center were scattered across campus with the Engineering Quadrangle serving as the center's temporary headquarters. Despite these ad-hoc arrangements, researchers have already been coming together.

Last year, four recently hired faculty members collaborated on a proposal to design long-lasting, inexpensive and environmentally friendly structures. Coming from the fields of architecture and mechanical, electrical and civil engineering, they had met after joining the Andlinger Center.

"The problems we face — both technologically and in terms of policy and economics — are not going to be solved just by one expert in one discipline," said Carter. "They are all complex problems and they require a team effort."

The new building should accelerate this kind of fruitful cross-fertilization of research and lead to a better future, she said.

"We are working in service of society," Carter said. "We are working to make the world a better place. It's very meaningful, it's incredibly important, and it gives you a real sense of satisfaction and reward knowing you are doing something good for the rest of the world."