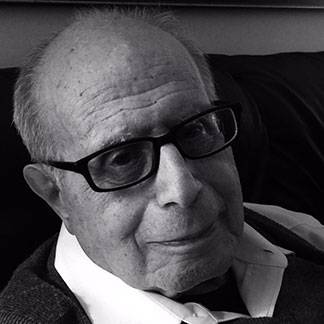 Ralph Freedman, professor of comparative literature, emeritus, at Princeton University, died May 5 of natural causes at his home in Decatur, Georgia. He was 96.

Freedman joined the Princeton faculty in 1965 and retired in 1988. He taught for two post-retirement years at Emory University.

"Over the course of his long career, Professor Ralph Freedman published works of literary criticism about modern European and American literature, translations from German, prize-winning historical novels, and several influential scholarly biographies," said Eileen Reeves, professor of comparative literature and department chair. "The range of Professor Freedman's critical and creative interests, and his commitment to the study of foreign languages and literatures, made him a crucial force in the early days of this department."

One of Freedman's hires for the department was John Fleming, now the Louis W. Fairchild '24 Professor of English and Comparative Literature, Emeritus. "In helping to recruit me to the department, he told me I had the highest possible qualification — a surname beginning with the letter F," said Fleming.

Fleming remembers Freedman with a mix of admiration and humor. "Those who knew him here will ever remember him as a delightful and generous colleague. He was a man of kind heart and good humor who combined the daunting polyglot erudition of the Old School European littérateur with an obviously sincere affection for his students," Fleming said. "He seemed to delight in honoring the stereotype of the absentminded professor, and even in such a highly competitive field he did achieve new horizons in administrative disorganization."

"Ralph Freedman taught me why it is important to be a humanist and that the true value of literature was that it allowed us to confront our best and worst moments with both critical distance and passion," said Kathy Komar, who earned her Ph.D. in 1977 and is a professor of comparative literature at the University of California-Los Angeles. "He was generous with both his time and his wisdom for students and colleagues alike. And he made sure that he did everything in his power to help us succeed in our careers. He was a genuine mentor who looked out for us over many years beyond graduate school," she said.

Ellen Frankel earned her Ph.D. in comparative literature at Princeton in 1978 and taught writing and literature at various colleges before becoming editor-in-chief of the Jewish Publication Society, a position she held until her retirement in 2009. She said her first impression of Freedman was that he was "definitely 'old school' — conservative in his attire, formal in his teaching style, addressing all of his students as Mr. and Miss. But although he was reserved in etiquette, he was just the opposite when it came to his favorite subject: Romanticism. In his graduate seminars he was passionate about the sorrows of Young Werther, about German Romantic philosophers, about the poetry of Wordsworth and Keats. I met my future husband in that Romanticism class. Ralph seemed especially tickled that a romance bloomed under his tutelage," she said.

Freedman taught regularly in the English and comparative literature departments, including developing the introductory course for graduate students as well as teaching undergraduate courses on lyric poetry and the lyrical novel.

As a literary theorist, his research focused on the lyric and prose fiction from the late 18th century through the present, primarily in English, German and French literatures. He formed the governing board of senior fellows for a new national school of literary criticism at the University of California-Irvine in 1975.

Born Feb. 24, 1920, in Hamburg, Germany, Freedman emigrated at 19 to England and then to the United States. He became a naturalized citizen in 1942, and from 1943-45 served in the U.S. Army, in intelligence in the field during World War II in Tunisia and Italy and, at the end of the war, in a counterintelligence team in Austria.

Freedman graduated Phi Beta Kappa from the University of Washington in 1948. In 1950 he earned a master's in philosophy from Brown University, where he was a teaching assistant for two years, and in 1954 he received his Ph.D. in comparative literature from Yale University.

He is the author of two historical novels based on his war experiences: "Divided" (1948) and "Rue the Day" (2009). His published works in literary criticism include "The Lyrical Novel: Studies in Hermann Hesse, Andre Gide and Virginia Woolf" (1963, Princeton University Press). Freedman wrote the biographies "Hermann Hesse: Pilgrim of Crisis" (1978), which has been translated into German and Italian, and "Life of a Poet: Rainer Maria Rilke" (1996), which he began to research and write while at Princeton with a Guggenheim Fellowship in 1980 and was published after his retirement.

"'The Lyrical Novel' was a landmark in literary studies because it showed us how to do comparative work when there weren't too many models around, and because it brought together three writers who were not obviously connected — Hermann Hesse, Andre Gide and Virginia Woolf — showing just how strong their theoretical and experimental connections were," said Michael Wood, the Charles Barnwell Straut Class of 1923 Professor of English and Comparative Literature, Emeritus.

Wood also commended Freedman's biographies of Hesse and Rilke. "[T]he mixture of generosity and cool critical sense in the writing was immediately recognizable, indeed unforgettable," he said. Wood published a review of the Rilke biography in the London Review of Books in 1996.

A prolific essayist whose work appeared in journals such as Texas Quarterly, Modern Fiction Studies and Comparative Literature Studies, Freedman also edited "Virginia Woolf: Revaluation and Continuity." He translated into English Sten Nadolny's novel "Die Entdeckung der Langsamkeit," which was published in 1987 as "The Discovery of Slowness." His works have been translated into German, French, Italian, Spanish, Korean and Japanese.

He is survived by two sons, Jonathan, of Ann Arbor, Michigan, and Mark, of New York, and six grandchildren. A public memorial service will take place at 2 p.m. Sunday, June 5, at the Maison Française at Columbia University, near the 116th Street and Broadway entrance. Contributions may be made in Freedman's memory to the Planned Parenthood Foundation.