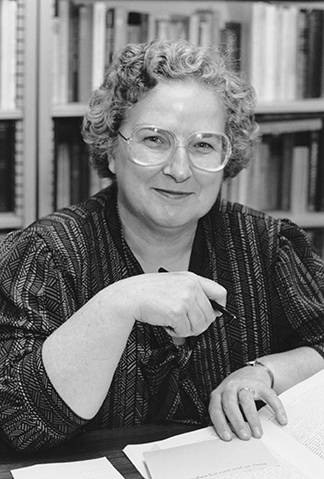 Elaine Fantham, the Giger Professor of Latin, Emeritus, and professor of classics, emeritus, who was known and admired for her outstanding scholarship and warm friendship, died July 11 of natural causes in Toronto. She was 83.

Fantham joined the Princeton faculty in 1986 and retired in 1999. Her main interests were Roman comedy and rhetoric, Latin epic from Virgil to Statius, Roman religion and the social history of Roman women. She served as chair of the Department of Classics from 1989-93, and from 1996-98 she directed graduate studies as well as the Program in the Ancient World.

"She was one of the most remarkable Latinists of her generation, with an unmatched range of expertise, and had an enormous impact through her scholarship, teaching and friendship," said Andrew Feldherr, professor of classics and chair of the Department of Classics.

"Elaine seemed to have had at her instant command everything that could be known about any aspect of Latin literature or Roman life, and an inexhaustible energy for translating that knowledge into scholarship that was as engaging and original as it was authoritative. From her early work on Plautus, she re-drew the map of Latin studies," Feldherr said.

"She was a pioneer both as a scholar of Roman women and as a woman scholar at times and places where women were scarcely represented in our field," he said, noting that many students had their first introduction to the lived experience of Roman women through the chapters she wrote for "Women in the Classical World: Image and Text" (Oxford University Press, 1994).

Calling Fantham "forthright and wonderfully entertaining," Feldherr said that she became a popular commentator for National Public Radio's "Weekend Edition," drawing parallels between the ancient and contemporary worlds. In 2003, she used that context "to challenge the wisdom (or highlight the folly) of American military engagement in Iraq," Feldherr said. That particular broadcast garnered the attention of The New York Times, which interviewed Fantham about her admonitions to George Bush, Donald Rumsfeld and their advisers, for a 2003 article.

Robert Kaster, the Kennedy Foundation Professor of Latin Language and Literature and professor of classics, said: "Perhaps the most striking thing about Elaine is that she seemed to know everything about classical Latin literature: I couldn’t count the number of times that she produced the most arcane fact or unexpected comparison in a casual conversation, not remotely by way of showing off, but naturally, as though, of course, this was the sort of thing anyone could be expected to know or understand.

"She was also unfailingly kind to friends and always interested in their news or news of their families — she loved the relationships she formed and found in them one of the sources of her remarkable energy," Kaster said.

Fantham was born in Liverpool, England, in 1933, and lived through the bombing raids of 1939-42 during World War II. According to her website, she was drawn to the study of classics "when she saw an advertisement for Sanatogen Tonic Wine with a glamorous young man with long hair and a tunic and his equally captivating female companion riding in a chariot past the Acropolis. By the time she understood that ancient Greece was nothing like this, she was thoroughly enamored with the subject."

Her publications include "Roman Literary Culture: From Cicero to Apuleius" (1996), "Women in the Classical World: Image and Text" (1994, with H. Foley et al.) and "Studies in Republican Latin Imagery (1972)," as well as commentaries on Seneca's "Troades," Lucan's "Civil War" and Ovid's "Fasti." She was coeditor and translator of "Erasmus: The Educational and Literary Works" (1989) and served as associate editor-in-chief of the seven-volume "Oxford Encyclopedia of Ancient Greece and Rome" (2010).

"Elaine was a phenomenal mentor who did not just advise her students on their scholarly work, but also opened her house to them and became their friend," said Katharina Volk, who earned her doctorate in classics in 1999 and is a professor of classics at Columbia University.

"Her Christmas parties, to which all classics graduate students were invited, were legendary and traditionally featured large bowls of pasta, large quantities of wine and a 'secret Santa,'" Volk said. "One year, she brought along a new translation of Plautus' comedy 'Pseudolus' and assigned roles to everyone for a semi-staged reading. It was a memorable night."

Stephen Wheeler, an associate professor of classics at Penn State University, earned his Ph.D. in classics at Princeton in 1992 and often visited Fantham in Toronto after she retired.

"What I have always valued in Elaine was her brilliant command of Latin texts and her sound opinion about them," Wheeler said. "The range of her knowledge on all things classical was immense and could be intimidating to students, but she was able to put us at ease and win our love with her earthy wit and unfailing generosity."

He recalled his last visit, at Easter in 2015, accompanied by his wife and children. "We had a lovely lunch and afternoon in her home, which included all the attractions of a do-it-yourself Plautine comedy — a strange assortment of delicacies and fast-paced verbal exchange," he said. "We will all miss her."

She was married to Peter Fantham, a mathematician, now deceased, and is survived by their daughter, Julia, and son, Roy, and their families.