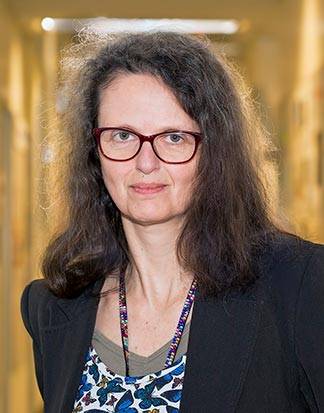 For the last five years, Riccardo was chief engineer for the Culham Centre for Fusion Energy in Oxfordshire, England, the U.K.'s national laboratory for fusion research, which operates the Joint European Torus (JET) and the Mega Amp Spherical Tokamak (MAST) facility, two fusion devices called tokamaks. JET shut down operations in November to prepare for fusion experiments using tritium. MAST has been undergoing a major upgrade and is also expected to restart operation this year as MAST-U, a sister facility to NSTX-U.

"We are fortunate to have Valeria as our new head of engineering," said Terry Brog, interim director of PPPL. "Her engineering experience on the JET and MAST facilities, along with her academic background, make her uniquely suited to lead our engineering department."

Riccardo, who started on Dec. 21, 2016, heads PPPL's largest department, with 240 staff members. She said she welcomes the opportunity to work directly with an engineering staff. She came to PPPL, she said, because she was looking for a new challenge and wanted to continue her work in developing fusion energy. "I wanted something different and PPPL is a respected fusion research center," Riccardo said. "I'm still a believer in fusion energy. I would like to contribute to getting a sustainable energy source, so I gave fusion another chance in another place!"

Rich Hawryluk, a PPPL physicist, said Riccardo's background is a perfect fit for PPPL. "I'm looking forward to working with her in her new role because her work will strongly impact the work on NSTX-U," he said. "Her early work shows a good understanding of the intersection of plasma physics and engineering and very often the difficult problems in fusion are at the intersection of plasma physics and engineering."

Before her most recent position, Riccardo was deputy engineering design and manufacture team leader for the ITER-like Wall (ILW) project at JET for six years. She is proud of having translated the physicists' requirements into feasible concepts and working to see them become a reality.

Beryllium and tungsten are brittle and can easily crack so Riccardo and her team inserted tiny grooves in the tiles that serve as "pre-made cracks so they can breathe," Riccardo explained.

Riccardo said she welcomes the opportunity to use her skills overseeing work on the NSTX-U. At the same time, she will be looking ahead to PPPL's future engineering projects. "I am trying to understand where we are and where we want to go," she said. "Once I get that, I can start thinking about goals for PPPL's engineering department."

PPPL, on Princeton University's Forrestal Campus in Plainsboro, New Jersey, is devoted to creating new knowledge about the physics of plasmas — ultra-hot, charged gases — and to developing practical solutions for the creation of fusion energy. The laboratory is managed by the University for the U.S. Department of Energy's Office of Science, which is the largest single supporter of basic research in the physical sciences in the United States, and is working to address some of the most pressing challenges of our time.