Senior Parnagian to focus on US underserved communities through fellowship 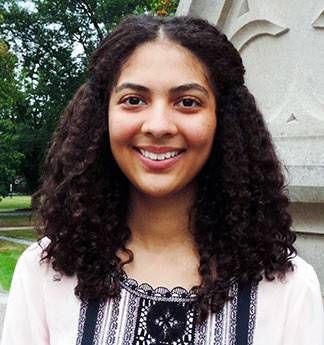 Photo by Gabriella Chu, Class of 2018

Princeton University senior Melissa Parnagian has been awarded a Sheila C. Johnson Fellowship from Harvard Kennedy School, a full tuition scholarship for graduate students with a demonstrated interest in developing leadership skills focused on reducing disparities in underserved communities in the United States.

Parnagian, from Parlin, New Jersey, is a major in the Woodrow Wilson School of Public and International Affairs and is pursuing a certificate in American studies. Parnagian was a member of the American Studies Advisory Council and served as chief correspondent of Princeton Correspondents on Undergraduate Research.

She received the R.W. Van de Velde award for outstanding junior independent work from the Woodrow Wilson School in 2016 and the University's Shapiro Prize for Academic Excellence in 2014. She is a member of Whitman College.

She has worked as a health policy research intern at the Center for Health Care Strategies, a correspondence and briefings intern for the Hillary for America presidential campaign, and a constituent services intern in the office of Sen. Cory Booker of New Jersey.

The Sheila C. Johnson Leadership Fellowship aims to address disparities in predominantly African American and other underserved communities through efforts in health care, education, public policy and other fields. The program connects fellows with national and international leaders through a yearlong co-curricular program, which includes weekly dinners, an annual retreat and field experiences.

"I want to engage with how policy is framed, debated and built to serve the public in its most inclusive form," said Parnagian. "While others ignore public policy's blind spots, I seek out underserved constituencies and spotlight their concerns on the political stage. Through continued study, I will advance policy that addresses the disparities facing marginalized groups — and, in doing so, reduce the gap between America's reality and its ideals."