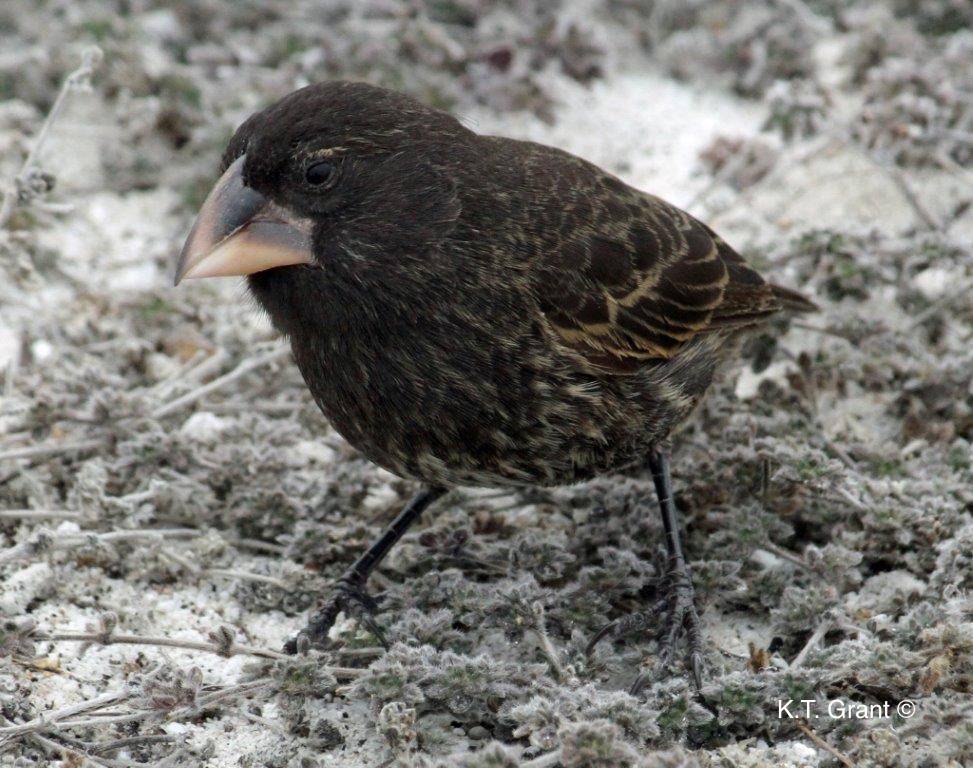 A new study illustrates how new species can arise in as little as two generations. The study tracked Darwin's finches on the Galápagos island of Daphne Major, where a member of the G. conirostris species (pictured) arrived from a distant island and mated with a resident finch of the species G. fortis. The offspring developed into a new species that the researchers call the Big Bird lineage.

The arrival 36 years ago of a strange bird to a remote island in the Galápagos archipelago has provided direct genetic evidence of a novel way in which new species arise.

On Nov. 23 in the journal Science, researchers from Princeton University and Uppsala University in Sweden report that the newcomer belonging to one species mated with a member of another species resident on the island, giving rise to a new species that today consists of roughly 30 individuals.

The study comes from work conducted on Darwin’s finches, which live on the Galápagos Islands in the Pacific Ocean. The remote location has enabled researchers to study the evolution of biodiversity due to natural selection under pristine conditions.

The direct observation of the origin of this new species occurred during field work carried out over the last four decades by B. Rosemary Grant and Peter Grant, a wife-and-husband team of scientists from Princeton, on the small island of Daphne Major.

"The novelty of this study is that we can follow the emergence of new species in the wild," said B. Rosemary Grant, a senior research biologist, emeritus, and a senior biologist in the Department of Ecology and Evolutionary Biology. "Through our work on Daphne Major, we were able to observe the pairing up of two birds from different species and then follow what happened to see how speciation occurred."

In 1981, a graduate student working with the Grants on Daphne Major noticed the newcomer, a male that sang an unusual song and was much larger in body and beak size than the three resident species of birds on the island.

"We didn't see him fly in from over the sea, but we noticed him shortly after he arrived. He was so different from the other birds that we knew he did not hatch from an egg on Daphne Major," said Peter Grant, the Class of 1877 Professor of Zoology, Emeritus, and a professor of ecology and evolutionary biology, emeritus. 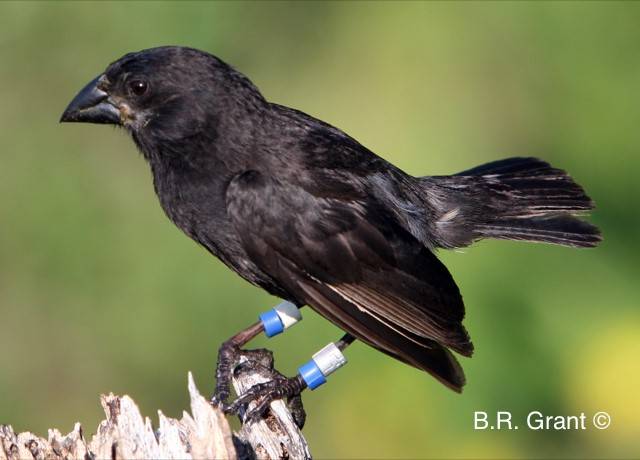 The bird is a member of the G. fortis species, one of two species that interbred to give rise to the Big Bird lineage.

The researchers took a blood sample and released the bird, which later bred with a resident medium ground finch of the species Geospiz fortis, initiating a new lineage. The Grants and their research team followed the new "Big Bird lineage" for six generations, taking blood samples for use in genetic analysis.

In the current study, researchers from Uppsala University analyzed DNA collected from the parent birds and their offspring over the years. The investigators discovered that the original male parent was a large cactus finch of the species Geospiza conirostris from Española island, which is more than 100 kilometers (about 62 miles) to the southeast in the archipelago.

The remarkable distance meant that the male finch was not able to return home to mate with a member of his own species and so chose a mate from among the three species already on Daphne Major. This reproductive isolation is considered a critical step in the development of a new species when two separate species interbreed.

Researchers previously assumed that the formation of a new species takes a very long time, but in the Big Bird lineage it happened in just two generations, according to observations made by the Grants in the field in combination with the genetic studies. 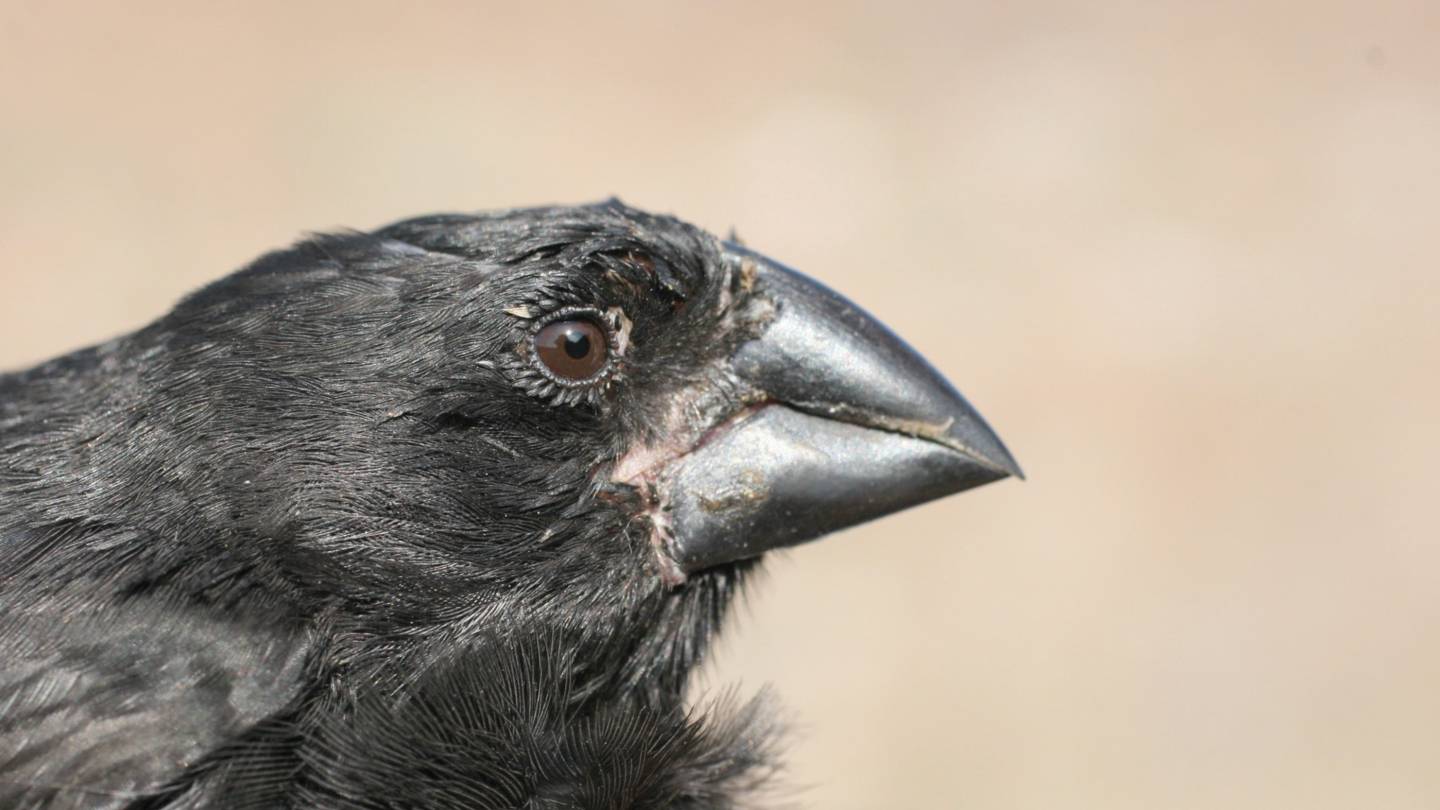 Play video:
Play Video: Study of Darwin’s finches reveals that new species can develop in as little as two generations

The direct observation of the origin of a new species occurred during field work carried out over the last four decades by B. Rosemary Grant and Peter Grant, a wife-and-husband team of scientists from Princeton, on the small island of Daphne Major in the Galápagos Islands in the Pacific Ocean.

Video by Peter and Rosemary Grant, Department of Ecology and Evolutionary Biology

All 18 species of Darwin’s finches derived from a single ancestral species that colonized the Galápagos about one to two million years ago. The finches have since diversified into different species, and changes in beak shape and size have allowed different species to utilize different food sources on the Galápagos. A critical requirement for speciation to occur through hybridization of two distinct species is that the new lineage must be ecologically competitive — that is, good at competing for food and other resources with the other species — and this has been the case for the Big Bird lineage.

"It is very striking that when we compare the size and shape of the Big Bird beaks with the beak morphologies of the other three species inhabiting Daphne Major, the Big Birds occupy their own niche in the beak morphology space," said Sangeet Lamichhaney, a postdoctoral fellow at Harvard University and the first author on the study. "Thus, the combination of gene variants contributed from the two interbreeding species in combination with natural selection led to the evolution of a beak morphology that was competitive and unique." 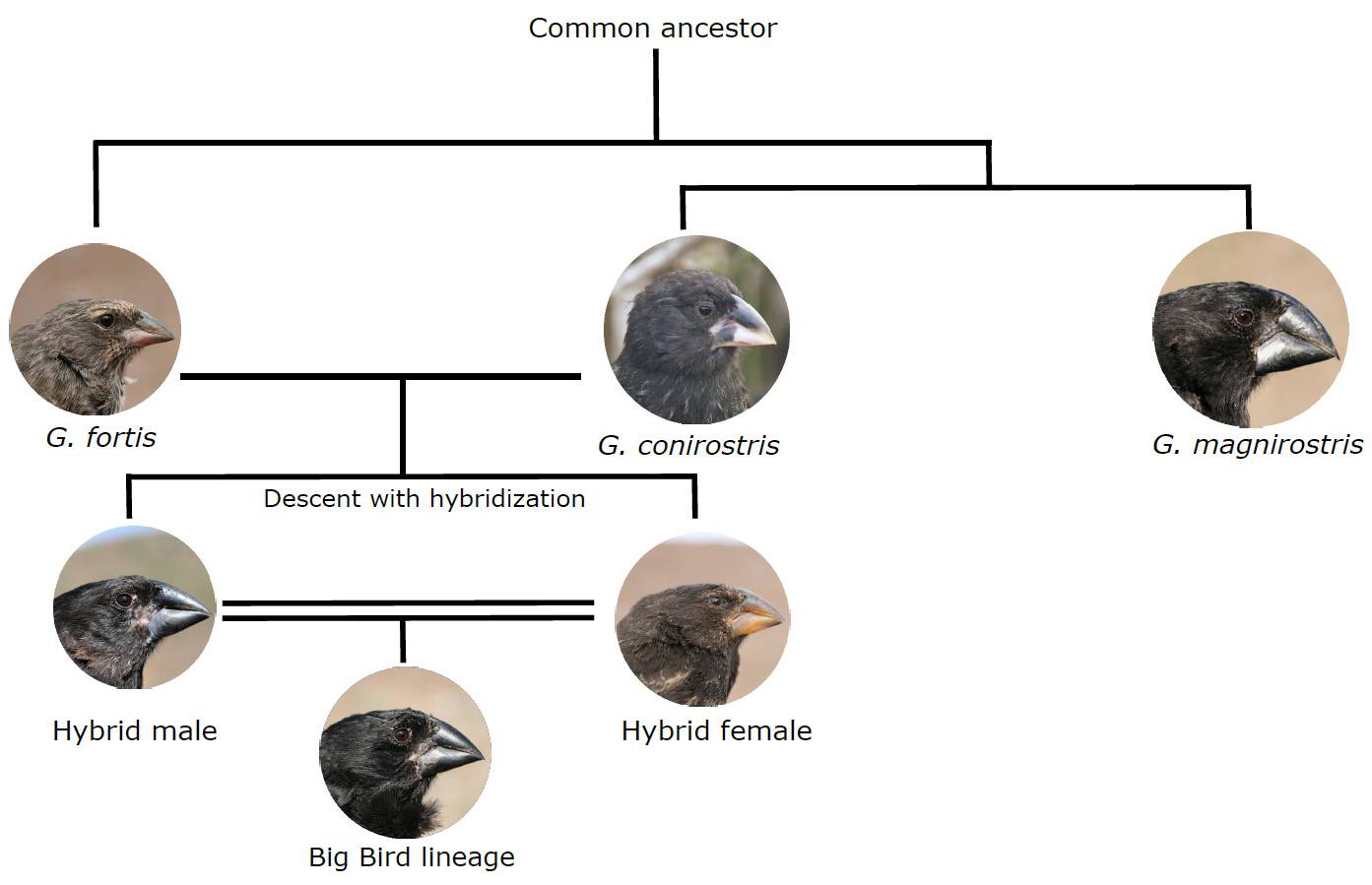 Schematic illustration of the evolution of the Big Bird lineage on the Daphne Major island in the Galápagos archipelago. Initially an immigrant large cactus finch male (Geospiza conirostris) bred with a medium ground finch female (Geospiza fortis). Their offspring bred with each other and established the Big Bird lineage. Photos © K. Thalia Grant for G. conirostris and Peter R. Grant for the remainder. Reproduced with permission from K.T. Grant, and Princeton University Press, which first published the remaining images in "40 Years of Evolution"

The definition of a species has traditionally included the inability to produce fully fertile progeny from interbreeding species, as is the case for the horse and the donkey, for example. However, in recent years it has become clear that some closely related species, which normally avoid breeding with each other, do indeed produce offspring that can pass genes to subsequent generations. The authors of the study have previously reported that there has been a considerable amount of gene flow among species of Darwin’s finches over the last several thousands of years. 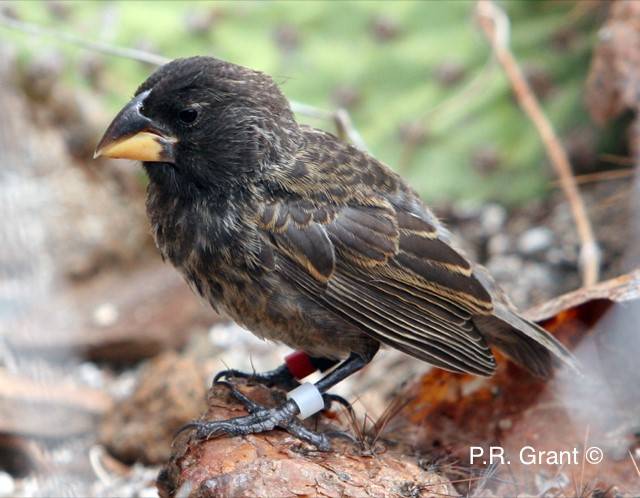 The breeding of two distinct parent species gave rise to a new lineage (termed "Big Bird" by the researchers). This lineage has been determined to be a new species. This image is of a member of the Big Bird lineage.

One of the most striking aspects of this study is that hybridization between two distinct species led to the development of a new lineage that after only two generations behaved as any other species of Darwin’s finches, explained Leif Andersson, a professor at Uppsala University who is also affiliated with the Swedish University of Agricultural Sciences and Texas A&M University. "A naturalist who came to Daphne Major without knowing that this lineage arose very recently would have recognized this lineage as one of the four species on the island. This clearly demonstrates the value of long-running field studies," he said.

It is likely that new lineages like the Big Birds have originated many times during the evolution of Darwin’s finches, according to the authors. The majority of these lineages have gone extinct but some may have led to the evolution of contemporary species. "We have no indication about the long-term survival of the Big Bird lineage, but it has the potential to become a success, and it provides a beautiful example of one way in which speciation occurs," said Andersson. "Charles Darwin would have been excited to read this paper."

Uppsala University contributed to the content of this press release.