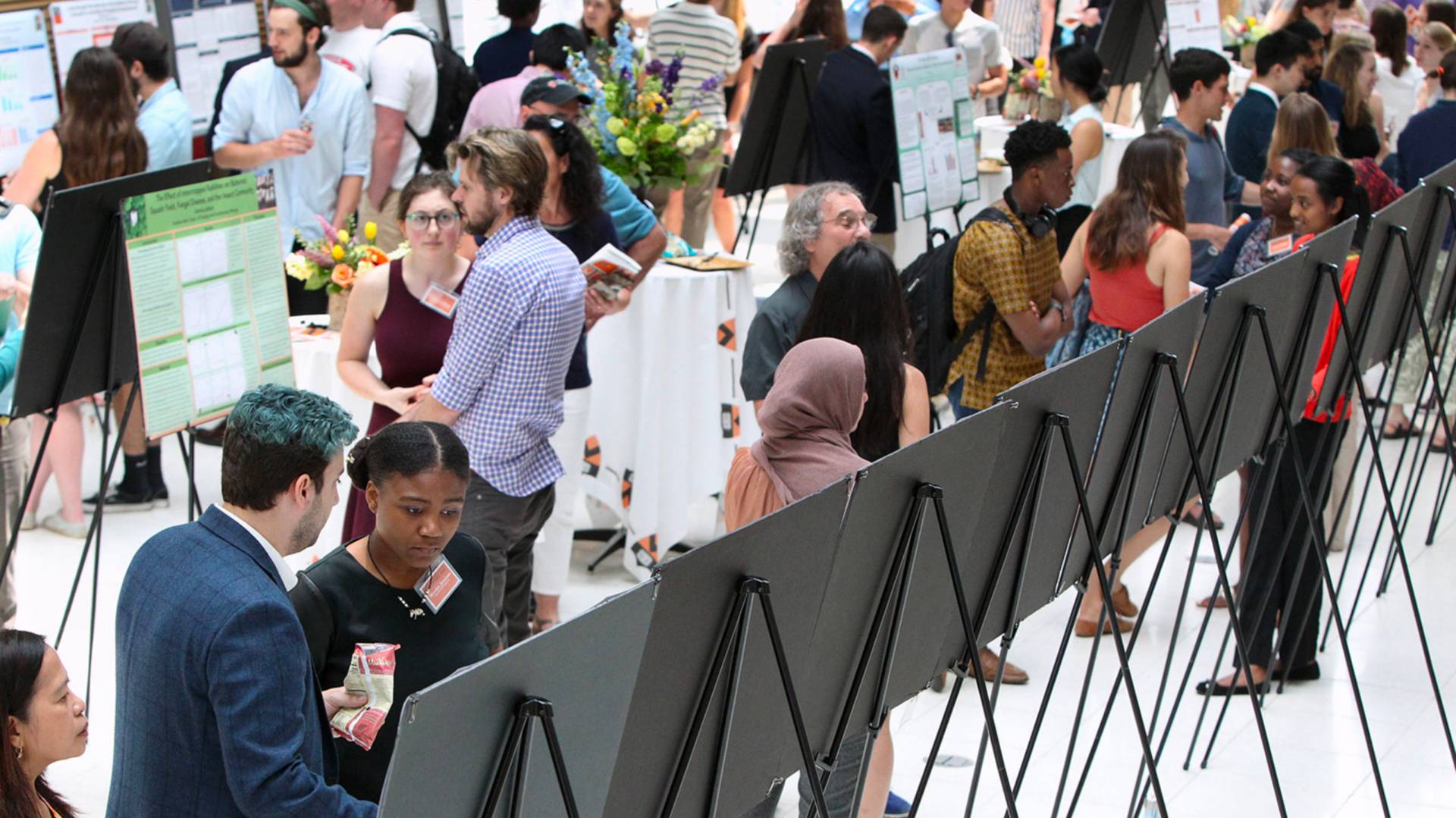 Seniors and graduate students exhibited the topical diversity of environmental studies at Princeton University during the seventh annual PEI Discovery Day hosted by the Princeton Environmental Institute May 9 in the Frick Chemistry Laboratory Atrium.

Seniors and graduate students exhibited the topical diversity of environmental studies at Princeton University during the seventh annual PEI Discovery Day hosted by the Princeton Environmental Institute May 9 in the Frick Chemistry Lab Atrium. Ninety-six students representing 20 academic departments showcased their research and discussed their findings with fellow students and University faculty.

Discovery Day is organized as the culminating event for students in PEI's undergraduate and graduate programs, seniors in the Program in Environmental Studies, and students who received field-research support from PEI.

Students examined subjects such as plumage-color evolution in hummingbirds, recycling concrete to mitigate acid mine drainage, and energy and water usage for Princeton's Vertical Farm Project. They investigated offshore wind-energy development in the Northeast, the link between coat color and aggression in horses, and childhood malnourishment in India. For the first time, the event included screenings of two student films: "RUN/Off" by Natalie Plonk, a senior dance thesis work set within the architecture of the new Lewis Arts complex; and "Fishing the Short Run" by Patrick Rooney in visual arts.

The photos and stories below provide a snapshot of the students, research and disciplines featured at Discovery Day 2018. A full listing of participants and projects is available in this year's event program. 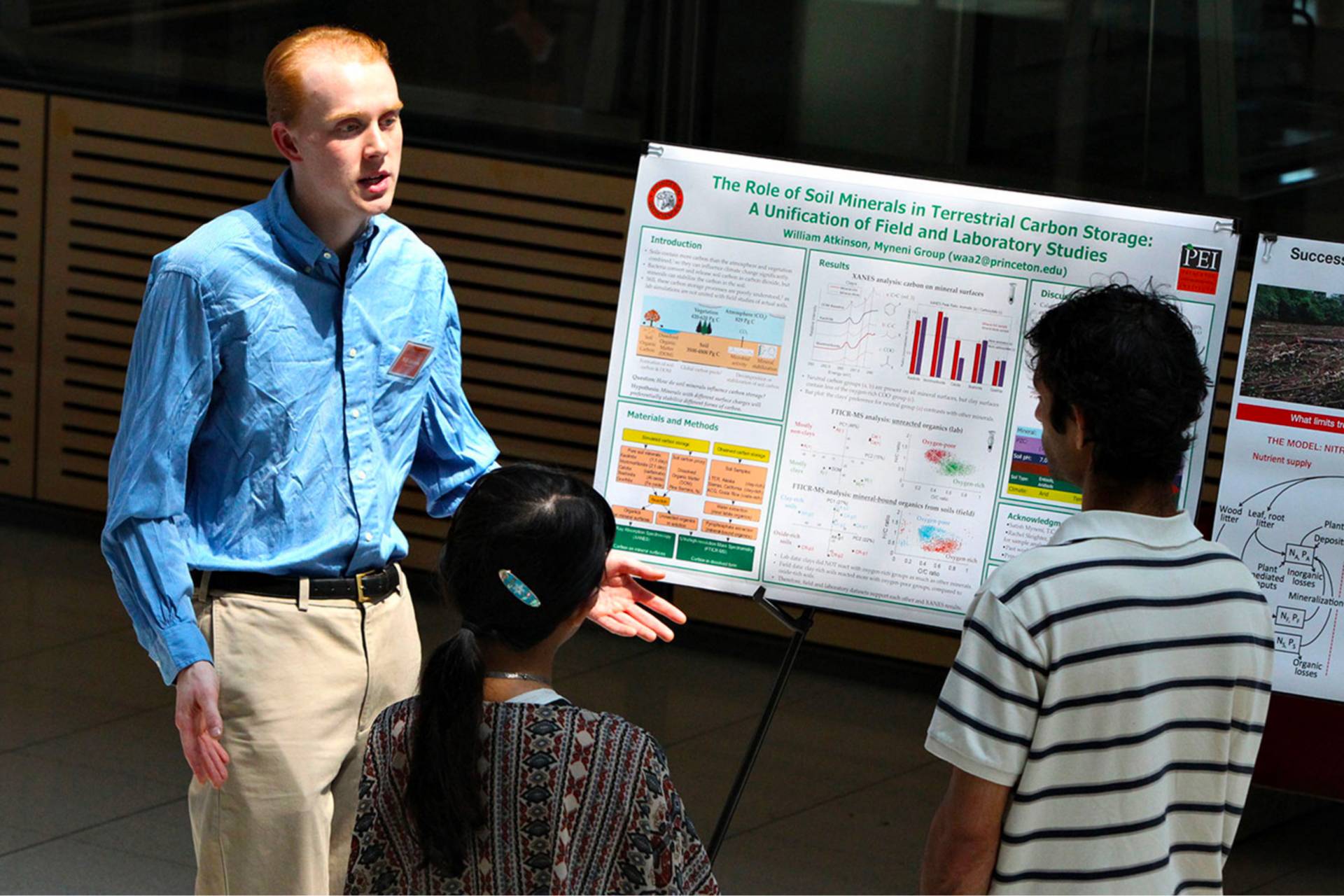 Senior William Atkinson studied how carbon emitted into the atmosphere is stored in the soil by naturally occurring minerals. Today's climate models do not account for how different minerals affect carbon storage, but Atkinson found that their influence is considerable. Minerals store different forms of carbon based on the mineral's surface charge, so the soil mineralogy can control whether a carbon molecule is stored, he said.

"We know where in the world each of these soil minerals are located," Atkinson said. "By understanding the different forms of carbon that each mineral can store, we can better understand where these forms of carbon are going to be stored. We can update models of carbon storage in soils and possibly improve projections of future climate change."

Atkinson used new spectroscopy methods to analyze five minerals — most studies have looked at one or two — spanning the range of minerals that are both abundant and reactive in soils. He then compared his results to analyses of field soil samples.

Atkinson received a two-year PEI Environmental Scholars Program award in 2016 to support his research, and worked on his project as a 2016 PEI summer intern. 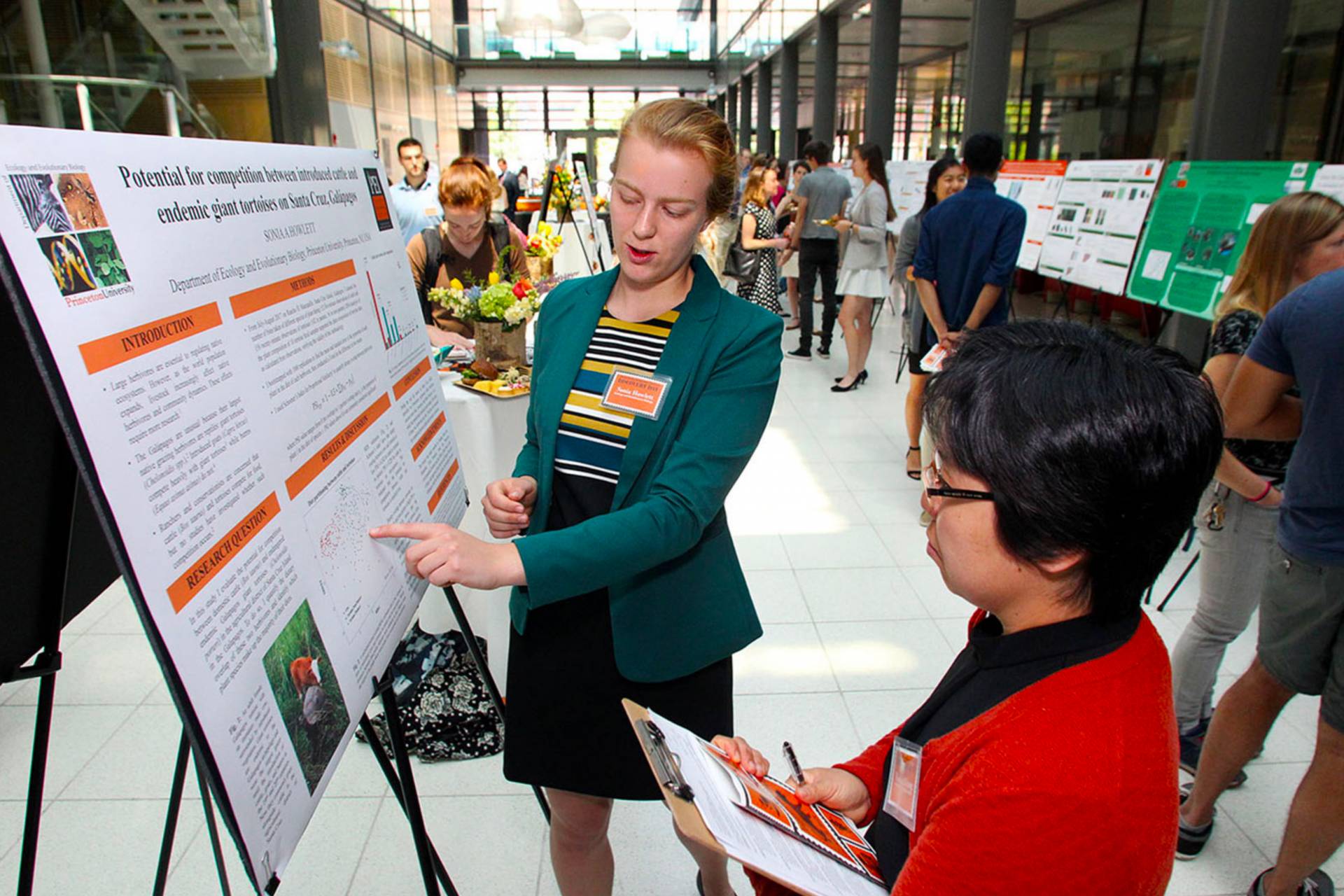 Senior Sonia Howlett investigated whether cattle and tortoises on the Galápagos island of Santa Cruz compete for food. Conservationists are concerned for the critically endangered tortoises, while ranchers — who have started building fences to keep the tortoises out — are protective of their livestock. Yet, no one has studied what effect, if any, the animals have on each other, Howlett said.

With support from PEI, Howlett conducted fieldwork on Santa Cruz noting and identifying the plants that individual cows and tortoises ate. She counted the number of bites the two species took to determine the proportion of each plant species in the diet of cows and of tortoises. She then used DNA metabarcoding — which identifies species by their genetic code — on tortoise fecal samples to confirm her field observations.

Howlett found that more than 70 percent of the cattle diet consists of elephant grass, an introduced species. Tortoises, however, are more generalist grazers that eat a wide variety of plants. "This shows one system in which a native species and an introduced herbivore are not competing," said Howlett, who plans to publish her findings. "It's really exciting to see a positive case study of an introduced agricultural species, at least in this particular interaction, not just destroying the native ecosystem." 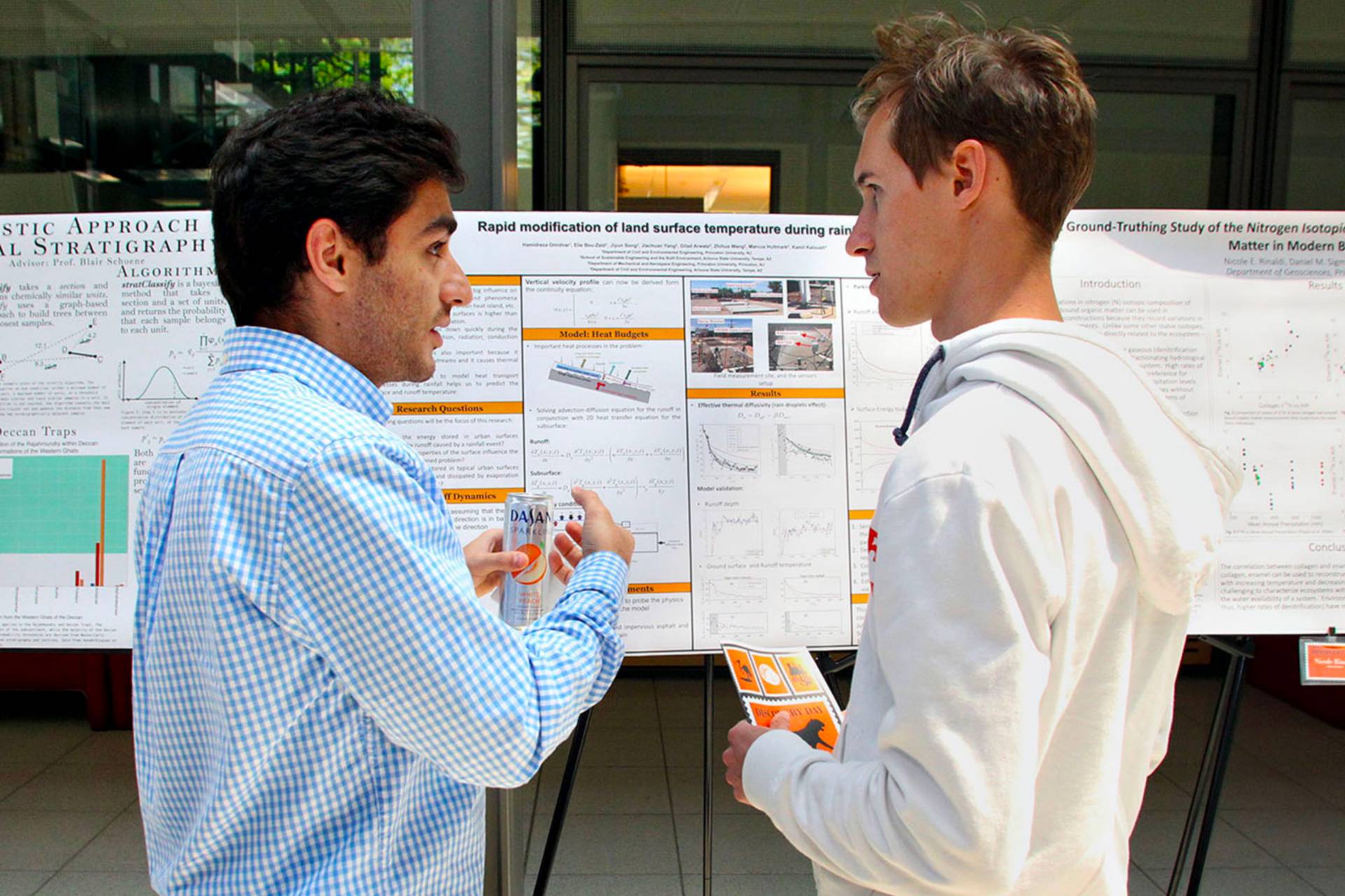 Graduate student Hamid Omidvar, who is supported by a 2017 PEI Hack Graduate Award, is modeling how surface and subsurface heat are transferred by runoff when it rains. Weather and geophysical models do not account for the fact that surface temperature can decrease rapidly by 10 or 15 degrees during rainfall, he said.

"Surface temperature affects atmospheric circulations and turbulence," Omidvar said. "If your model considers that the temperature of the surface remains the same before and after rainfall, your projections may be wrong."

Omidvar's model combined runoff dynamics with heat-transfer dynamics inside runoff and subsurfaces. He performed experiments at Arizona State University to simulate this process and to get data to validate the model. He conducted a case study of the heat-transfer processes of pervious and impervious parking-lot pavements during rainfall. 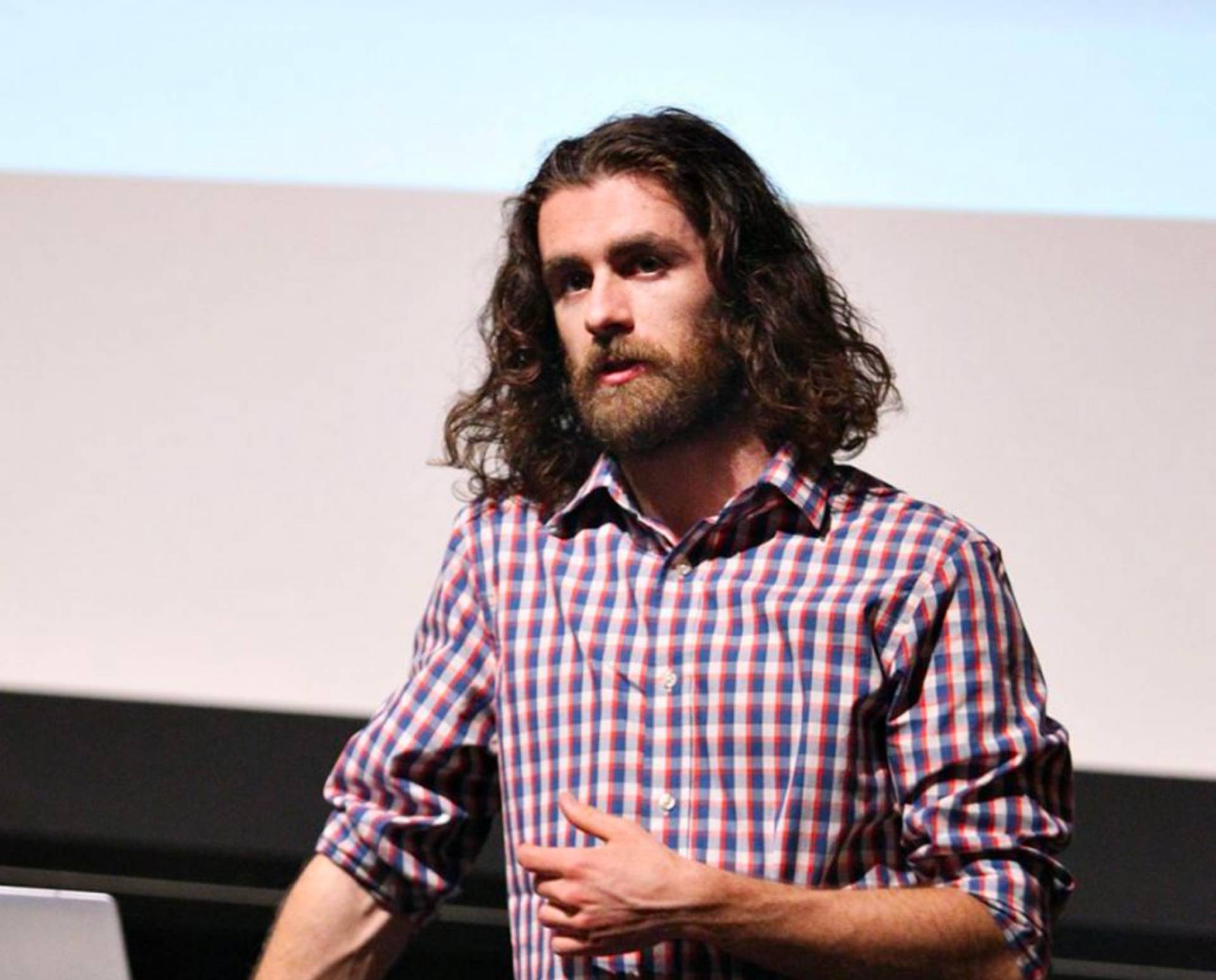 Patrick Rooney, a senior, created a film about the diminishing annual catch of king salmon in Alaska.

Senior Patrick Rooney shot and directed a film about the potential causes and consequences of the diminishing annual catch of king salmon in Alaska. The annual salmon "run" — during which the fish migrate from the oceans to their birthplace to reproduce — is crucial for native communities and the Alaskan economy.

"I constantly heard about the last couple of years being really weird and no one seemed to know why," said Rooney, who homesteaded in Alaska during his 2017 gap year. "After a couple of weeks of hearing that, I said, this is the story."

After filming interviews with scientists, Alaska Natives, fishers and salmon farmers, Rooney delved into data from the National Oceanic and Atmospheric Administration. He found a correlation between lower salmon runs on certain rivers off the Bering Sea and increased incidences of salmon by-catch by trawlers fishing the sea for Alaska pollock, one of the most widely eaten fish in the world for which the annual catch is around 1.5 million tons. Salmon by-catch caps for Alaska pollock trawlers have been instituted, Rooney said, but protective measures seem to largely regulate small-scale subsistence fisheries. "I think it's a striking case of environmental injustice," Rooney said. "Some of those regulations are really punishing the natives for something they didn't do. The problem is out in the ocean."

Anthropology
"When It Rains, It Floods: An Ethnography of Infrastructure and Citizenship in New Orleans"
Adviser: Andrew Johnson, Assistant Professor of Anthropology 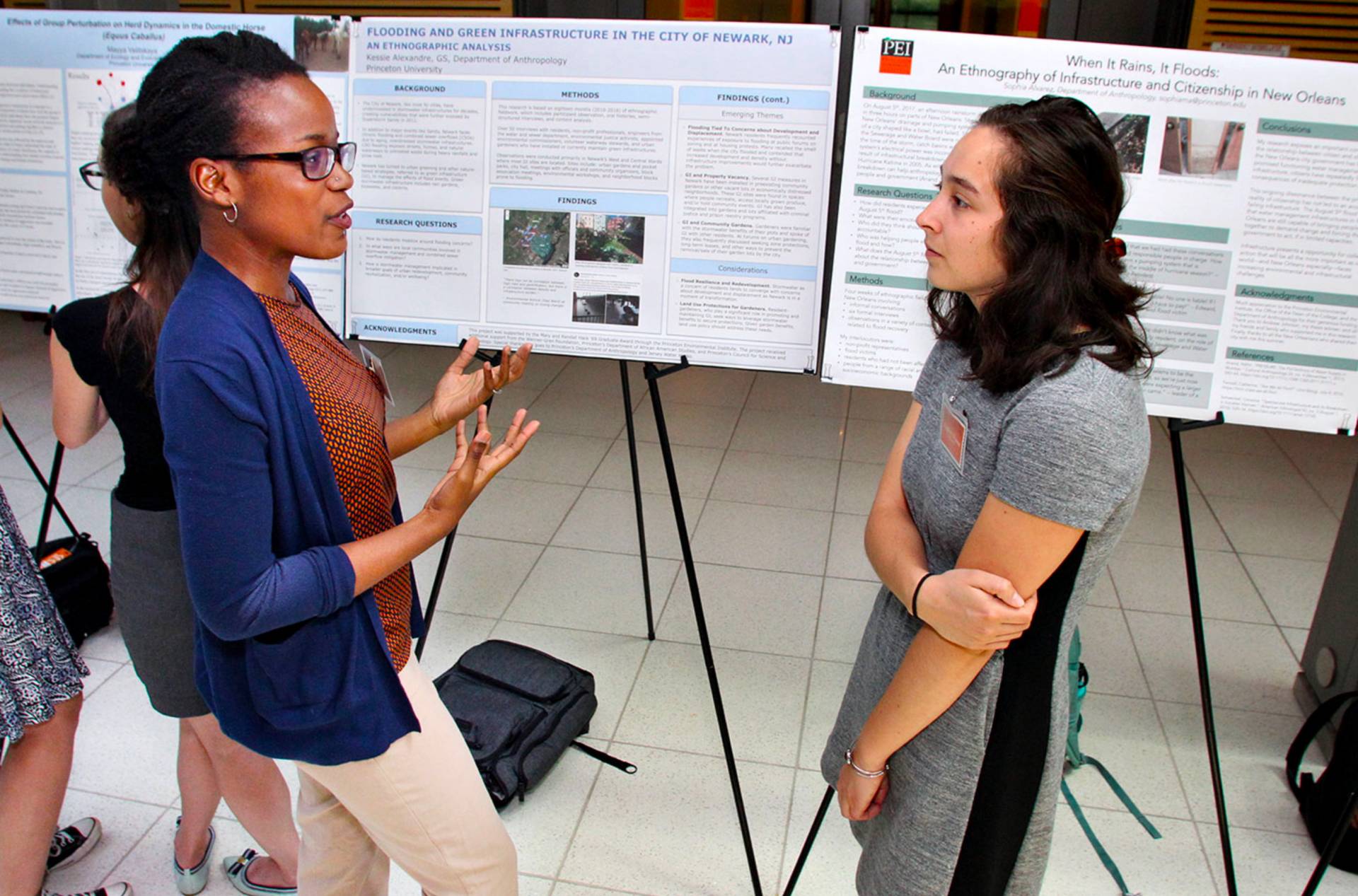 With support from PEI, senior Sophia Alvarez traveled to New Orleans to explore how people there interact with and respond to the city's "severe environmental challenges," she said. She arrived a few days after a flood caused by an infrastructure breakdown, so she examined people's reactions and relationships with the city's pumping and draining infrastructures.

Alvarez found that infrastructural failure provides a place from which people can demand more from government, which quickly repaired the physical cause of the flood, but did not adequately address people's needs and concerns afterward, she said.

"My project highlights some of the ways that people navigate the consequences of a changing climate," Alvarez said. "Severe rainfalls like what caused this flood are happening more and more often. I see this as an example of future floods that may not be catastrophic, but will still have real impacts on livelihoods." 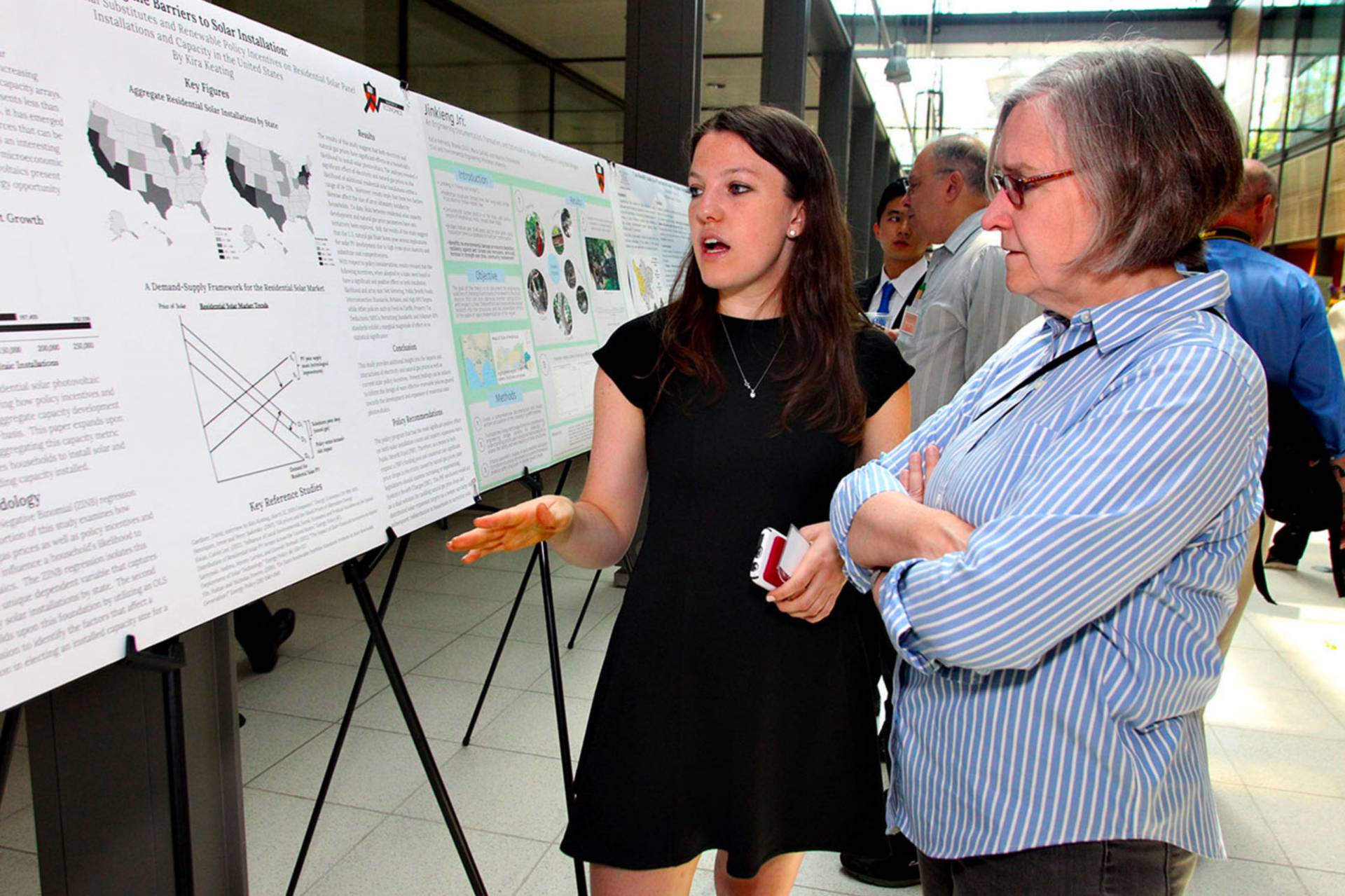 Senior Kira Keating looked into what motivates homeowners to install solar panels. She examined the issue from three angles: the influence of different policy incentives; the effect of electricity and natural gas prices; and social parameters such as a household's environmental stance.

Keating found that cash-based policy incentives are the most effective relative to other policy incentives, and that with every marginal increase in electricity prices households are more likely to install solar. She also found that at a state's political orientation is a proxy for a household's proclivity to install solar. She found that New England — despite its long winters — has one of the largest regional concentrations of household solar-panel installation, but not the sunny Southeast. Keating attributed this to policy incentives and the fact that homeowners in New England are more likely to support environmental causes. 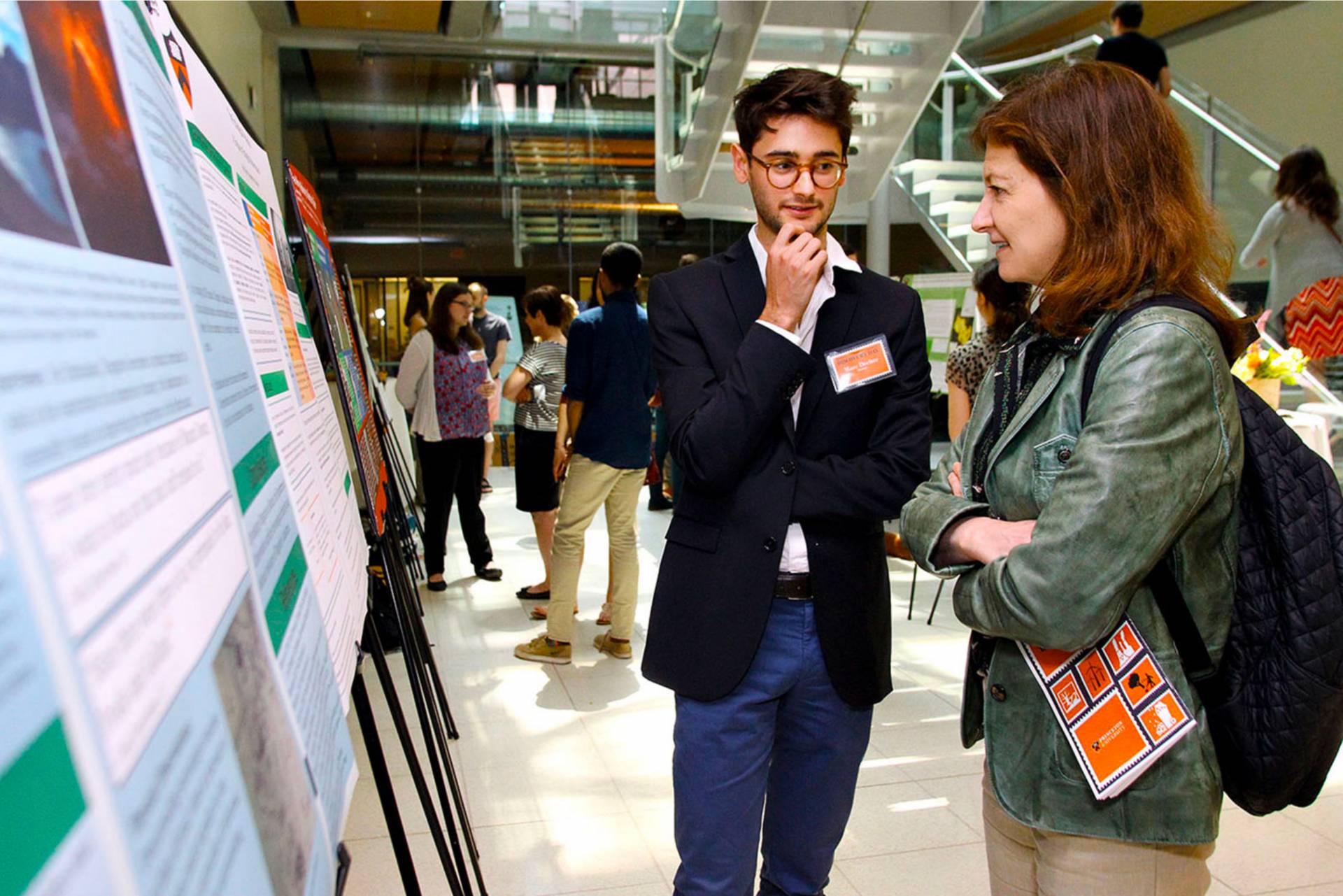 Senior Marc Decitre explored how modern environmentalism seeks to improve the future without addressing the underlying destructiveness of the past. Supported by PEI, he examined this contradiction through the lens of German thought, much of which develops what is called a dialectical mode of thinking, he said.

"To put it very simply, it's about understanding how certain processes contain within themselves their own self-defeating contradiction," Decitre said. "You can't solve an environmental problem without first thinking about the driving forces that caused the problem in the first place.

Attempts to resolve that dialectic in environmentalism have either focused on the ideal of an untouched and pristine nature in which humans have no place, or have embraced technological solutions without recognizing that these may cause even greater problems later, Decitre said. In addition to cleaner technology, he said, what is needed are new social paradigms and ways of thinking that break with those that have led to environmental destruction in the past.