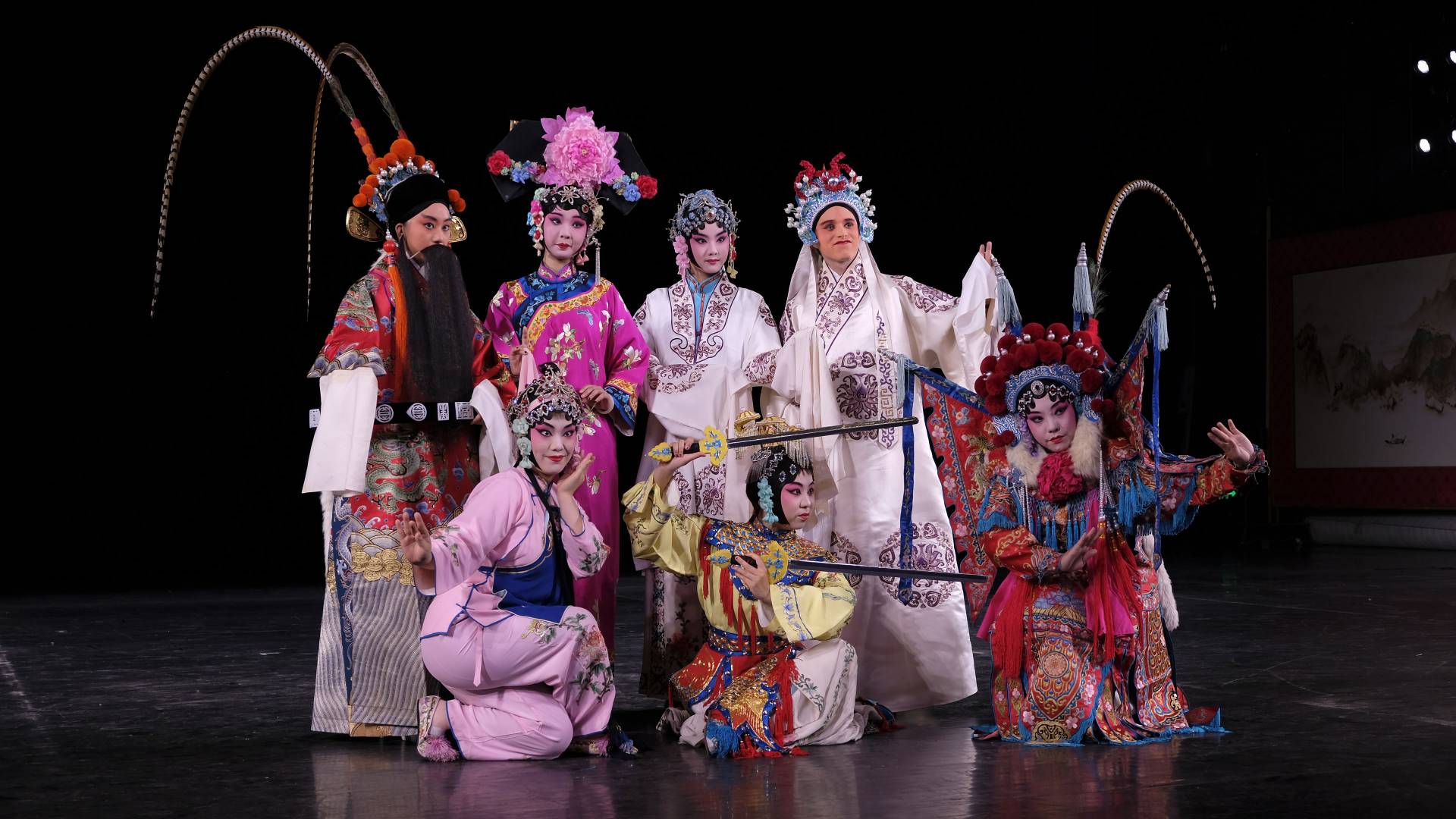 In Shanghai, 22 Princeton University participants in the Peking Opera Immersion Program spent three weeks learning the history and artistry of the traditional Chinese performance art. Above, University students pose at the conclusion of a day of training on the unique costumes, makeup and props typical of Peking opera style.

When a staging of the classic Chinese opera “Farewell My Concubine” performed by the Shanghai Peking Opera Company sold out at Princeton University in September 2017, Jianping Mei, a 1990 graduate alumnus in economics, had a big idea. He wondered if there were enough Princeton students interested in studying Peking Opera — in Shanghai.

Mei determined the essential requirements to join the pilot project would be a strong motivation to study traditional Chinese opera and facility in Mandarin Chinese, since all instruction would be in the Chinese language. He approached the Program in East Asian Studies.

“He said five students would be enough, but to our delight we ended up with a full roster of 19 students, one faculty member and two staff members to take up this challenge of three weeks of immersion in Chinese opera in Shanghai,” said Chao-Hui Jenny Liu, program administrator of the Program in East Asian Studies. Liu served as coordinator and field director of Princeton's inaugural Peking Opera Immersion Program in Shanghai.

The program, which ran Aug. 20 through Sept. 7, was held in the studios of the Shanghai Peking Opera Company (SPOC), one of 10 professional Peking opera troupes entitled by the Chinese Ministry of Culture, with more than 300 staff members and two performing groups. 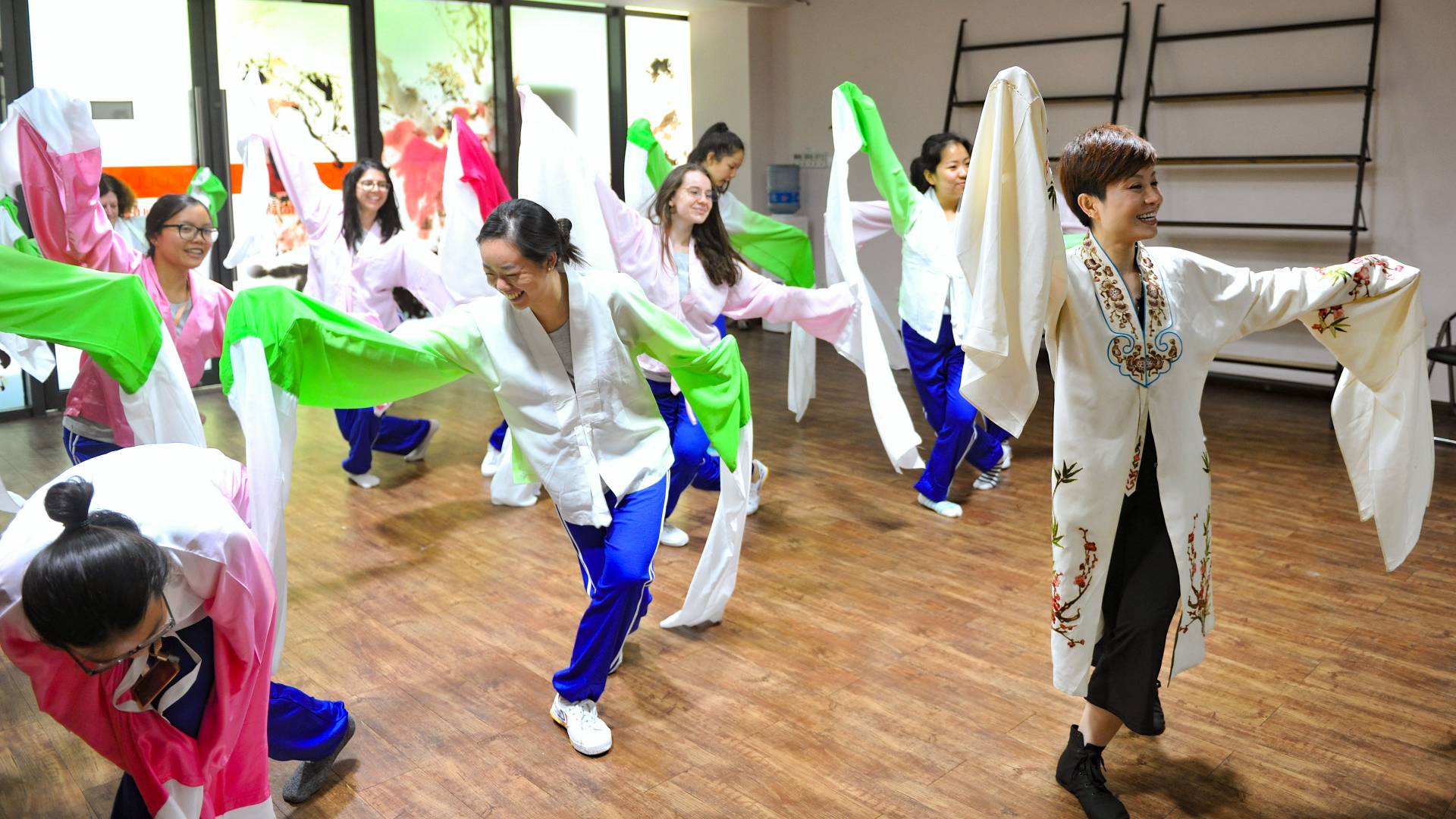 Under the guidance of Cao Jian (right), a Shanghai Peking Opera School vice principal and master teacher, Princeton participants learn and practice a "water sleeves" dance routine. The study of water sleeves is considered foundational training for all female roles in Peking opera.

Ming Wilson, a music major who graduated in 2018, described the experience. “It’s like an apprentice learning a craft from a master — not only the intimacy of the relationship, but also the different skills that are being shared,” he said.

Students’ daily routines started with three hours of morning training in basic skills. Half of the group learned a martial arts movement sequence, and half practiced water sleeves and spear dancing. Water sleeves are the long, white silk sleeves attached to the cuffs of women’s character costumes in traditional Chinese opera.

During the first week of training, afternoon lectures focused on the essentials of Peking opera performance: the distinctive music, stock characters, minimal set, elaborate costumes and the codified greasepaint makeup. Over the following two weeks, the afternoon sessions became intensive scene study workshops, in which groups of two to five students worked together with teachers to prepare for performance of an aria, scene or dance from traditional Peking operas.

Although the immersion program with Princeton was the first collaboration in Shanghai between SPOC and a foreign institution, the opera company has a long history of training local children and amateurs through its “Follow Me” after-school and night-study program. At the end of the second week of intensive study, Princeton students presented their martial arts and water sleeves dance sequences as part of the “Follow Me” students’ end-of-term show on the SPOC stage. 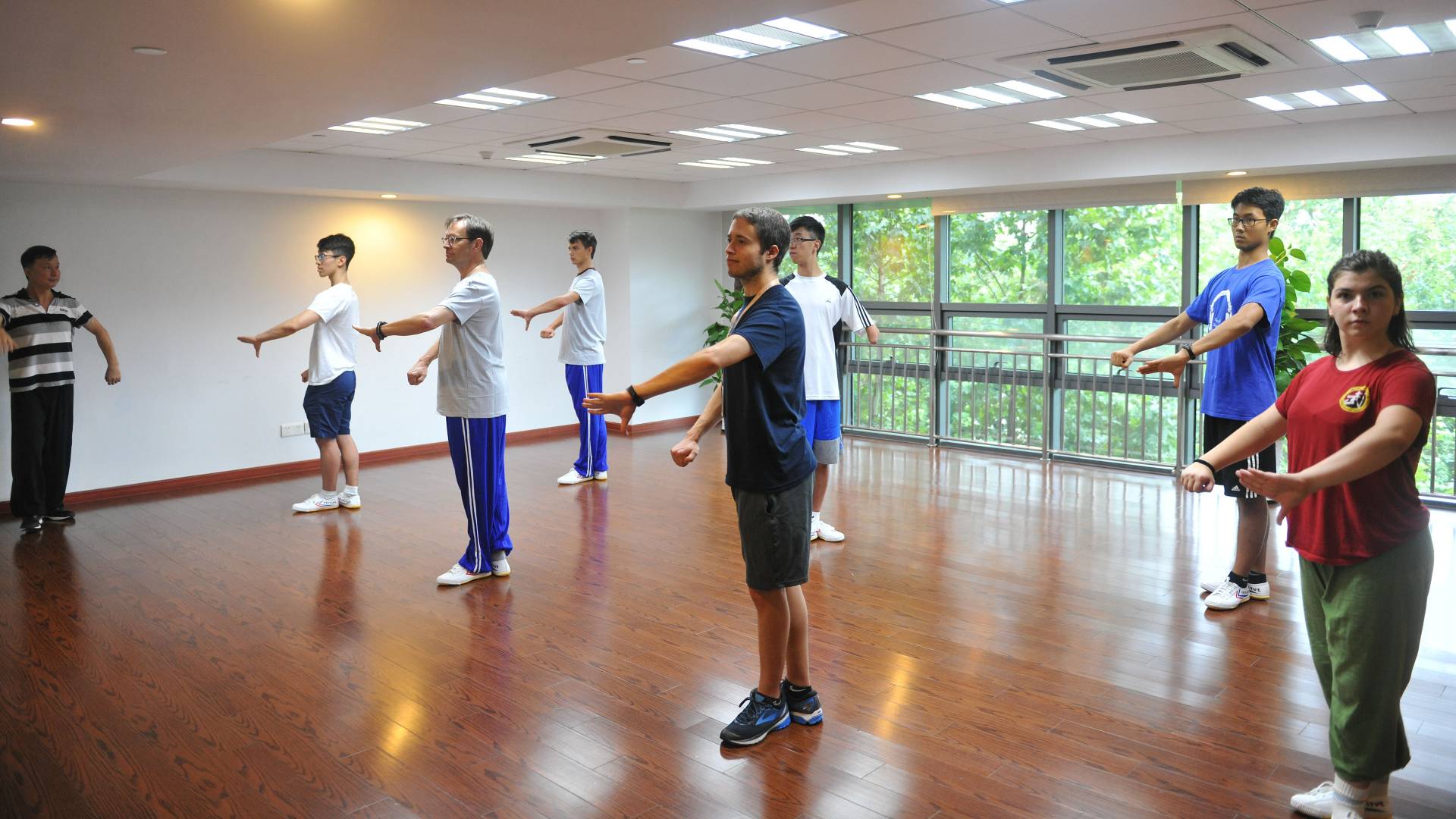 “Becoming part of their experience and performing ourselves was really exciting and heartwarming," said Teresa Irigoyen-Lopez, a member of the Class of 2019 majoring in mechanical and aerospace engineering. "When I went back and sat down, a bunch of little girls came up to me and asked, ‘Can you sign an autograph? You were so good!’”

Wendy Heller, the Scheide Professor of Music History and department chair, who took part in the first two weeks of the program, said: “It was tremendously exciting to be on the scene, watching our students absorb the elements of a new musical style and choreographic language, immersing themselves completely and fearlessly in the experience, asking questions, and practicing in their spare time. That they were able to do this all in Mandarin was particularly impressive. As an opera scholar, I look forward to incorporating Peking opera into my teaching in the coming years.” 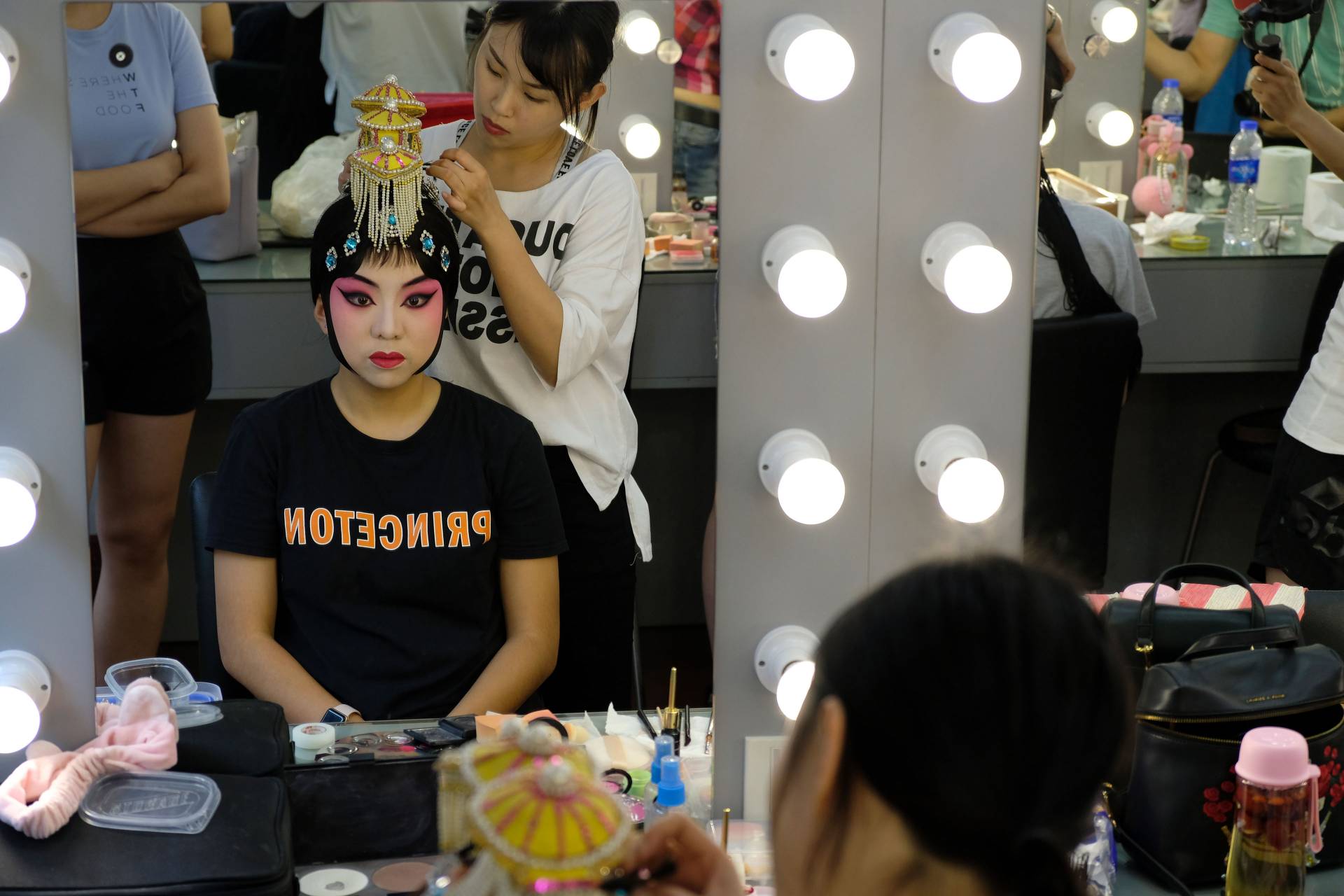 A Shanghai Peking Opera Company makeup and hair artist attaches the distinctive headdress of a wudan, a female martial character, to Sarah Du, Class of 2021. The process of makeup, hair styling and costuming involved multiple artists and required two hours of expert effort for each character.

At the end of the third week, each of the six groups presented their scene on stage with live accompaniment by SPOC musicians. As a finale, the Princeton students prepared a choral arrangement of a famous Chinese pop song, “Friend,” to express their gratitude to their teachers and hosts. 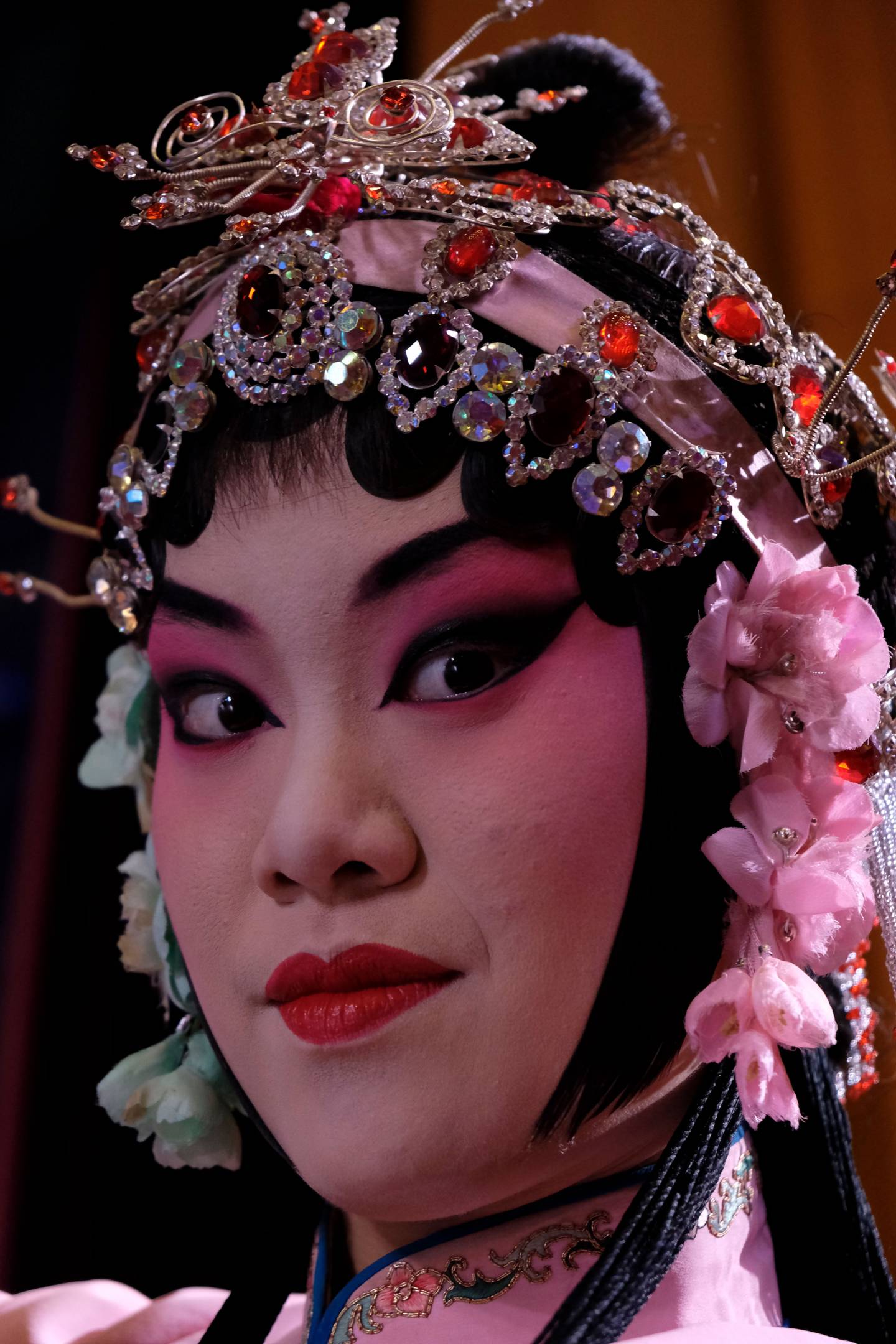 In full makeup, hair and costume, Xiaodi Alice Tang, Class of 2018, pauses for a closeup during a training session. The headdress on performers must be tied on securely with the fastenings so tight that only with practice and training can they perform fully, opening their jaws fully and seemingly unencumbered, to sing. This is one of the unique aspects of Peking opera.

Stephen F. Teiser, the D.T. Suzuki Professor in Buddhist Studies in the Department of Religion and director of the Program in East Asian Studies, summed up the virtues of the program: “The summer opera program highlights what Princeton does best in international education: Students from across the University, all with excellent language skills and devoted to performance. World-class teachers of an ancient art form popular across China. Sparked by a Princeton alum, generously supported by the University and other donors. Collaboration among programs. Shepherded by administrators who solved problems and made productions fly. What could be better than that?”

On Oct. 6, one month after returning to Princeton, the students reprised their performances for a standing room-only crowd in the new Lewis Arts complex. The gusto of the student performances and enthusiastic audience response confirmed that the inaugural year was a success. The Peking Opera Immersion Program will be offered again in summer 2019, and students can sign up to receive a notice of when applications are open.

“This program is a terrific example of the transformative experiences that well-structured international programs offer our students — innovative, interdisciplinary and immersive — both culturally and intellectually," said Anastasia Vrachnos, vice provost of international affairs and operations. "To see students integrating their experiences back on campus and to imagine future cohorts of students benefiting from this extraordinary collaboration is simply wonderful.”

In addition to the Program in East Asian Studies, sponsors of the 2018 Peking Opera Immersion Program included the Department of Music and the Office of the Vice Provost for International Affairs and Operations, and in Shanghai the Shanghai Peking Opera Company and the Shanghai Huang Yimei Culture and Media Company. Support was also provided by the Joel L. Epstein ’67 *72 Fund for China Initiatives, the Paul and Marcia Wythes Center on Contemporary China, Princeton in Beijing, and the Department of East Asian Studies. 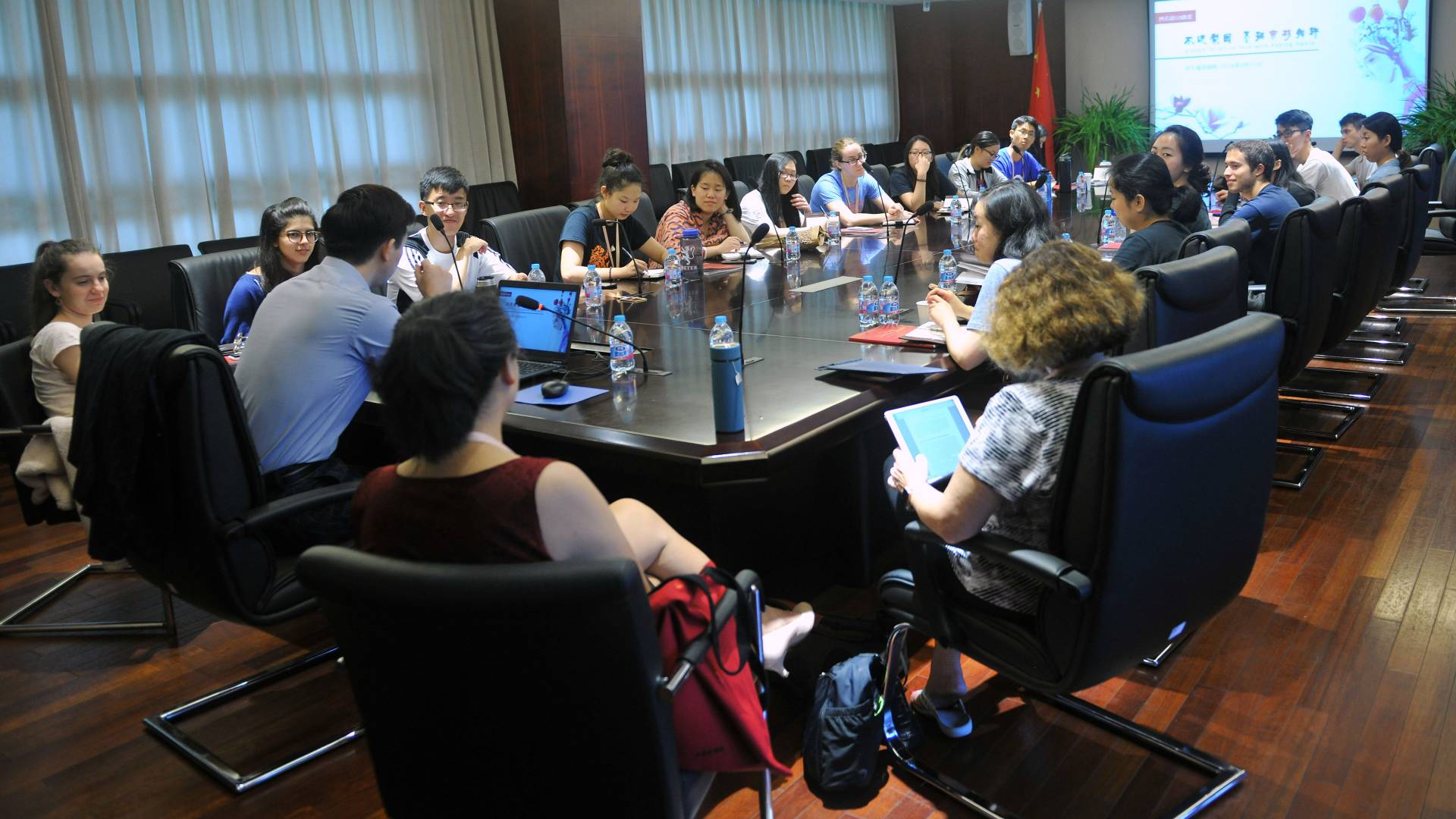