Even young children know what typical dogs and fish look like — and they apply that knowledge when they hear new words, reports a team from the Princeton Baby Lab, where researchers study how babies learn to see, talk and understand the world.

In a series of experiments with children 3 to 5 years old, the researchers found that when children are learning new nouns, they use what they know about these objects — how typical or unusual they are for their categories (such as fish, dog, bird or flower) — to help them figure out what these words mean. This type of sophisticated reasoning was thought to only develop later. The researchers' work appears in the current issue of the Journal of Child Language. 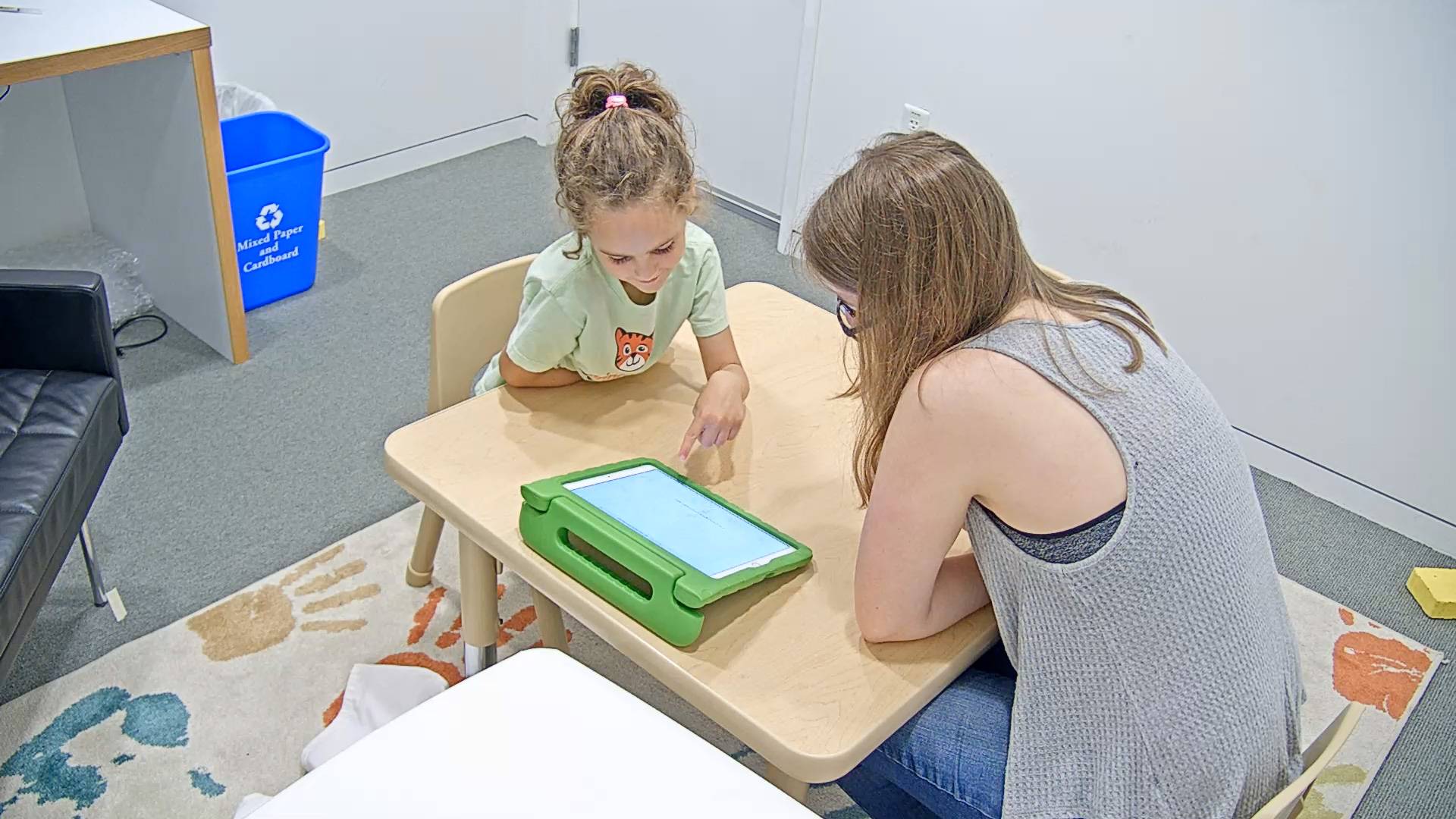 Graduate student Emily Liquin guides a child through a language experiment at the Princeton Baby Lab. A team of Baby Lab researchers found that young children use what they already know about objects — how typical or unusual they are for their categories — to help them figure out what newly encountered words mean, a type of sophisticated reasoning that was thought to develop much later.

“What we’re showing is that meaning matters!” said Adele Goldberg, professor of psychology at Princeton University and the senior author on the paper. “Children take the meaning of the objects that they are seeing into account when they learn new words.”

The researchers coined this tactic the "blowfish effect." If children see a blowfish (or a greyhound or an unusual tropical flower) and learn a new word to go with it, they will assume it refers to that specific type of object and not the broader category of fish (or dogs or flowers).

“This study helps to solve one of the big puzzles in language development,” said Lauren Emberson, assistant professor of psychology and first author on the paper. Many years of studies have shown that when children learn new words, they assume that word means something fairly general: If taught a new word for a goldfish, children assume that it means “fish.”

“But children can learn these more specific terms,” like blowfish and greyhound, said Emberson, who is also one of the directors of the Princeton Baby Lab. “How do they start to do that? We are showing that they use the objects themselves to do this. If they see an unusual fish and their parent calls it something, they will learn that it refers to that specific fish.” 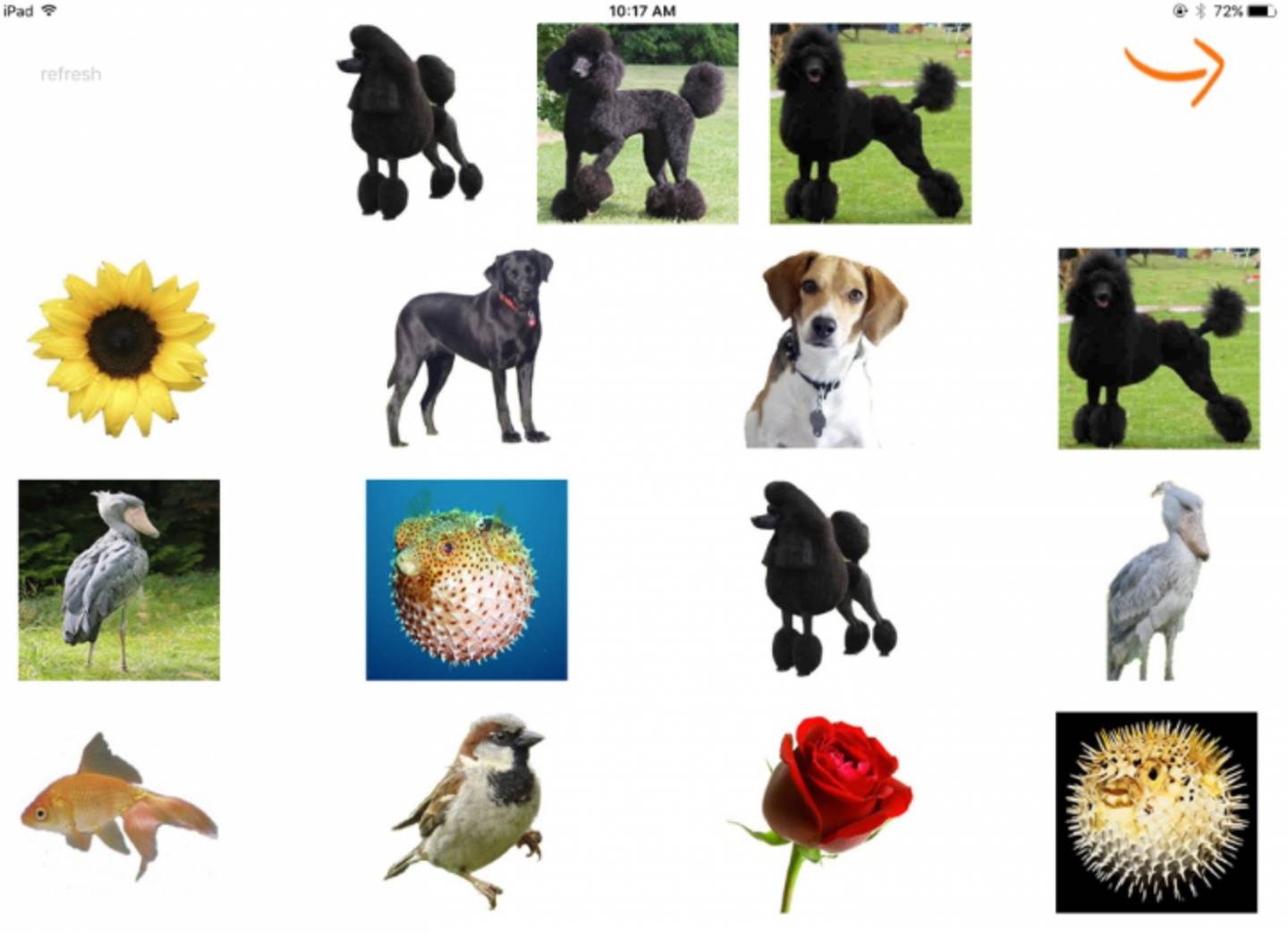 In word-learning experiments, children saw examples at the top of an iPad screen, identified by a new word like “galt,” and then 12 more images below. After being asked, “Can you find the galts?” they could select as many images as they wanted. The researchers were testing whether 3- to 5-year-olds would decide a “galt” only meant the specific creature in the examples — a poodle, in this case — or if they would apply it more generally to all dogs. They found that the more unusual the example creature, the more likely the children were to apply the term narrowly.

iPad screenshot courtesy of the researchers

Using a custom designed iPad program, the researchers taught children four new words: fep, zak, lat and galt. Two of these terms were used for typical objects and two for unusual objects. The objects came from four categories that children are familiar with: fish, birds, dogs and flowers.

In each trial, a child saw either one or three examples at the top of the screen, identified by a new word: “This is a fep,” or “These are three feps.” With the press of an arrow, the child got 12 more images below: two that matched the examples, two that shared the category, and eight unrelated creatures. The experimenter then asked, “Can you find the feps?”

The researchers were curious whether children would decide a “fep” only meant the specific creature in the examples — a robin, for example, or a Dalmatian — or if the term was applied more generally to all birds or dogs.

Each child could choose as many images as she wanted to, at her own pace, before proceeding to the next trial by pressing the arrow again. The order of the four categories — fish, birds, dogs and flowers — was randomized across participants.

The researchers ran the same experiment with college students; the only differences were that the undergraduates were told that this was an experiment intended for young children, and they were allowed to hold the iPads themselves.

The team found that both children and adults processed the new words in the same way. When any of them saw an unusual dog labeled a “fep,” they were more likely to interpret it narrowly — as meaning that type of dog, not “dogs” more generally. These findings run counter to the idea that children will always assume that new words should be interpreted as general terms.

In addition, the researchers found that the more “typical” an example looks, the more likely children are to assume it’s a general term, unless it is repeated: A “zak” was likely to be interpreted as “fish” if it labeled a single salmon — a fairly typical-looking fish — but it was interpreted as “salmon” if illustrated by three salmon. But if “zak” labeled even a single odd-looking fish — like a blowfish — the children were more likely to decide that the word meant “blowfish” than “fish.”

“The finding helps shed light on the mysteries and intricacies of language development,” Emberson said.