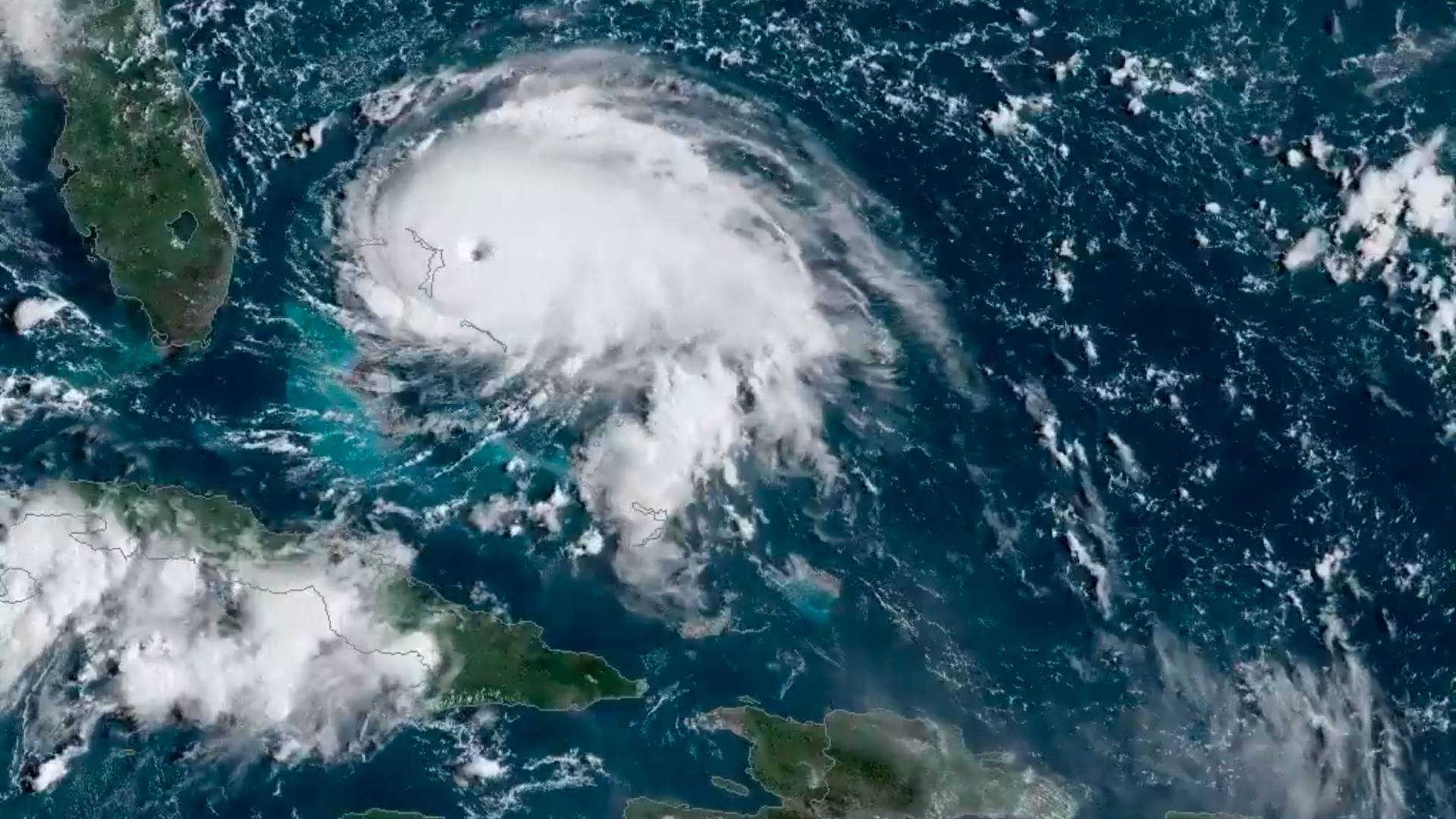 Hurricane Dorian, a Category 5 storm with wind gusts of 200 mph, had a forward (“translational”) motion of just over one mph as it crossed Grand Bahama in September 2019. This time-lapse video shows Dorian between Aug. 29 — one day after it became a hurricane — and Sept. 3, when it began to pull away from the Bahamas and head for the US mainland. A team of climatologists led by Princeton’s Gan Zhang used a large ensemble of climate simulations to explore the link between anthropogenic climate warming and hurricane movement speed. While the climate models examined in this study do not indicate such a link near the Bahamas, the models do project a future slow-down of storm movement in some populated mid-latitude regions, like off the coast of Japan or New York.

Hurricanes moving slowly over an area can cause more damage than faster-moving storms, because the longer a storm lingers, the more time it has to pound an area with storm winds and drop huge volumes of rain, leading to flooding. The extraordinary damage caused by storms like Dorian (2019), Florence (2018) and Harvey (2017) prompted Princeton’s Gan Zhang to wonder whether global climate change will make these slow-moving storms more common.

Zhang, a postdoctoral research associate in atmospheric and oceanic sciences, decided to tackle the question by using a large ensemble of climate simulations. He worked with an international team of researchers from the Geophysical Fluid Dynamics Laboratory on Princeton University’s Forrestal campus and the Meteorological Research Institute in Tsukuba, Japan. The results of this work appear in the April 22 issue of Science Advances.

Zhang and his colleagues selected six potential warming patterns for the global climate, then ran 15 different possible initial conditions on each of the six patterns, resulting in an ensemble of 90 possible futures. In all 90 simulations, they told the computers to assume that global carbon dioxide levels have quadrupled and the planet’s average temperature has risen by about 4 degrees Celsius — a level of warming that experts predict could be reached before the turn of the century, if no action is taken to curb fossil fuel use.

"Our simulations suggest that future anthropogenic warming could lead to a significant slowing of hurricane motion, particularly in some populated mid-latitude regions,” Zhang said. His team found about the storms’ forward motion would slow by about 2 miles per hour — about 10 to 20% of the current typical speeds — at latitudes near Japan and New York City.

“This is the first study we are aware of that combines physical interpretation and robust modeling evidence to show that future anthropogenic warming could lead to a significant slowing of hurricane motion,” he said.

“Since the occurrence of Hurricane Harvey, there has been a huge interest in the possibility that anthropogenic climate change has been contributing to a slow down in the movement of hurricanes,” said Suzana Camargo, the Marie Tharp Lamont Research Professor at Columbia University’s Lamont-Doherty Earth Observatory, who was not involved in this research. “In a new paper, Gan Zhang and collaborators examined the occurrence of a slowdown of tropical cyclones in climate model simulations. They showed that in this model, there is a robust slowdown of tropical cyclone motion, but this occurs mainly in the mid-latitudes, not in the tropics.”

Why would the storms slow down? The researchers found that 4 degrees of warming would cause the westerlies — strong currents blowing through the midlatitudes — to push toward the poles. That shift is also accompanied by weaker mid-latitude weather perturbations. These changes could slow down storms near populated areas in Asia (where these storms are called typhoons or cyclones, not hurricanes) and on the U.S. eastern seaboard.

Usually when people talk about hurricane speeds, they’re referring to the winds whipping around the eye of the storm. Those wind speeds are what determine a storm’s strength — a Category 5 hurricane, for example, has sustained winds of more than 157 miles per hour. By contrast, Zhang and his colleagues are looking at the “translational motion,” sometimes called the “forward speed” of a storm, the speed at which a hurricane moves along its path. (The term comes from geometry, where a figure is “translated” when it slides from one part of a graph to another.) No matter how fast its winds are, a storm is considered “slow-moving” if its translational speed is low. Hurricane Dorian, which battered Grand Bahama Island from Sept. 1 to 3, 2019, was a Category 5 hurricane with wind gusts reaching 220 miles per hour, but it had a translational speed of just 1.3 mph, making it one of the slowest hurricanes ever documented.

Are storms already slowing down?

Some researchers have suggested that tropical storm translation speeds have slowed over land regions in the United States since 1900. Zhang and his colleagues used their climate models to see if human-caused warming was responsible for the observed slowdown, but they couldn’t find a compelling link, at least based on trends since 1950 in their simulations. In addition, they noted that observed slowing translational speeds reported in recent studies could arise primarily from natural variability rather than human-caused climate changes.

Zhang used the metaphor of dieting to explain the ambiguity of hurricane observations.

"If I go to the gym and eat fewer sweets," he said, "I would expect to lose weight. But if I’m only using a bathroom scale to weigh myself, I’m not going to get convincing data very soon, for many reasons including that my bathroom scale isn’t the most accurate," he continued. “Assume after two weeks, I see some weak trend,” he said. “I still can’t tell whether it’s due to exercise, diet or just randomness.”

Similarly, the observed slowdown trend in hurricanes or tropical storms over the past century could be due to small-scale local changes or could just be random, he said.

“In the debate between ‘Everything is caused by climate change’ and ‘Nothing is caused by climate change’ — what we are doing here is trying to offer that maybe not everything can be immediately attributed to climate change, but the opposite is not right, either,” Zhang said. “We do offer some evidence that there could be a slowdown of translational motion in response to a future warming on the order of 4 degrees Celsius. Our findings are backed by physics, as captured by our climate models, so that’s a new perspective that offers more confidence than we had before.”

“Tropical Cyclone Motion in a Changing Climate,” by Gan Zhang, Hiroyuki Murakami, Thomas Knutson, Ryo Mizuta and Kohei Yoshida, was published in the April 22 issue of Science Advances (DOI: 10.1126/sciadv.aaz7610). The research was supported by Princeton University’s Cooperative Institute for Modeling the Earth System through the Predictability and Explaining Extremes Initiative.