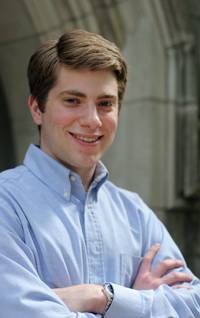 Senior Matthew Shapiro has won the Keasbey Scholarship, which provides the opportunity to study for two postgraduate years at selected British universities.

Shapiro, who is from Menands, N.Y., will attend the University of Oxford's Balliol College, where he will pursue a master’s degree in political theory, concentrating on political morality.

He will graduate from Princeton with a bachelor's degree in the Woodrow Wilson School of Public and International Affairs. He was elected to Phi Beta Kappa and twice received the Shapiro Prize for Academic Excellence.

During his undergraduate years, Shapiro has worked to improve race relations at Princeton: co-chairing the student-government committee that issued a survey on race and a report analyzing the results; participating in the Minorities Issues Action Committee; and moderating biweekly dinner discussions on diversity-related issues for Sustained Dialogue.

He was the project coordinator for a group of Princeton students who tutored and mentored elementary-school children at the Esperanza housing complex and community center in Trenton, N.J. He also served as a resident adviser and sang baritone for the University's Glee Club.

Last summer, Shapiro interned in the Manhattan district attorney's office, where he helped investigate several white-collar crimes, including the Iraqi oil-for-food scandal. In the summer of 2003, he served as an enforcement investigator in the Washington, D.C., field office of the U.S. Equal Employment Opportunity Commission.

As an intern with the Lower Manhattan Development Corporation in the summer of 2002, Shapiro organized the nationally televised press conference that revealed six planning options for rebuilding the World Trade Center.