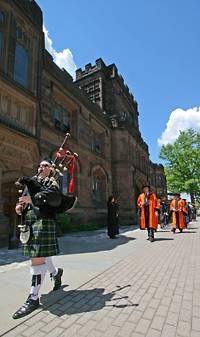 Whitney Kalmbach, a member of the class of 2005, led the procession playing bagpipes.

At left: Students processed into the Chapel for the Baccalaureate service, one of Princeton's oldest traditions. 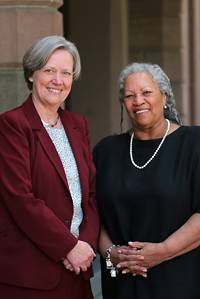 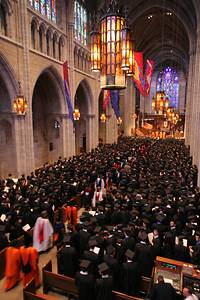 The Chapel was filled for the service, which included prayers and readings reflecting the diversity of religious life at Princeton.

The narrative of your life "is yours to write," Toni Morrison told members of the class of 2005 at Princeton University's Baccalaureate service on Sunday, May 29. "And I urge you," she continued, "don't settle for happiness because it's not good enough anymore."

"There is serious, hard and ennobling work to do, and bit by bit, step by step, you can change the things that need changing," said Morrison, the Robert F. Goheen Professor in the Humanities, in an address that explored human reactions to "the perception of chaos" and how the seniors should approach their future with an ethical compass.

Baccalaureate, an interfaith worship service, dates to 1760 and is one of Princeton's oldest traditions. Held in the University Chapel, it includes prayers and readings reflecting the diversity of religious life at Princeton. A "sermon" or address is given by a speaker chosen by the president after discussion with class leaders.

Morrison is a writer who has redefined the modern American novel and American literature itself, said President Shirley M. Tilghman in her introduction of the speaker. Winner of the Nobel Prize in literature in 1993, Morrison also is an accomplished teacher who has been a professor at Princeton since 1989.

Morrison cautioned the seniors to be vigilant about analyzing the messages the world gives them and rejecting labels and assumptions. "The dire prophecies that win our attention," she said, "are those with bank accounts large enough or photographs sensational enough to force debate and outline corrective action so we can decide which war or famine or political debacle or environmental crisis is intolerable enough."

In reacting to these forces, "We can ... meet the unknown, confront the chaos with our own humanity," she said. "Princeton has offered you instruments, knowledge, strategies of critical thought, contact with others, instruments to inform your choices and shape your negotiations."

"You are a citizen in a community and a person like no other on the planet," Morrison said. "No one has your exact memory but you. ... What is now the limit of human endeavor is not the limit of intelligent endeavor. And what is now known is not at all what you are capable of knowing."

She encouraged the seniors, as they build their life stories, to be creative, assiduous and original.

"Although you don't have complete control of the story of your life, you can nevertheless create it. Although you will never fully know or successfully manipulate all the characters who surface or disrupt your planned plot, you can respect the ones who do by paying them close attention and doing them justice.

"The theme you choose may change or elude you, but being your own story means you can always set the tone. It also means you can invent the language to say who you are and how you mean in the world. Of course I am a storyteller and therefore an optimist, a firm believer in the ethical bend of the human heart, a believer in the mind's appetite for truth and its disgust with fraud. I'm a believer in the power of knowledge and the ferocity of beauty, so from my point of view your life is already artful -- waiting, just waiting, for you to make it art."

The Baccalaureate service was Webcast live and will be available for later viewing on this site. End-of-the-year activities will continue with Class Day on Monday and Commencement on Tuesday.