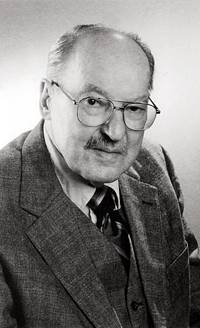 Image Courtesy of the Franklin Institute

Pioneering meteorologist Joseph Smagorinsky, who developed influential methods for predicting weather and climate conditions and was affiliated with Princeton for many years, died Sept. 21 after a long struggle with Parkinson's disease. He was 81.

Smagorinsky founded the Geophysical Fluid Dynamics Laboratory (GFDL), which is operated by the federal government and has been located on the University's Forrestal campus since 1968. His work profoundly influenced the practice of numerical weather prediction around the world. Climate models developed at the lab have led to greater understanding about humans' capabilities to affect climate change.

The same year the GFDL moved to Princeton, Smagorinsky was named a visiting lecturer with the rank of professor in geological and geophysical sciences at the University. He helped develop the Program in Atmospheric and Oceanic Sciences, a doctoral program in the Department of Geosciences that collaborates closely with the GFDL. Following his retirement as director of the GFDL in 1983, he served as a visiting senior fellow in atmospheric and oceanic sciences at Princeton until 1998.

"Dr. Smagorinsky, a major player in the move of the GFDL to Princeton more than 30 years ago, in effect provided Princeton University with a graduate program," said George Philander, a professor of geosciences and director of the Program in Atmospheric and Oceanic Sciences. "It is because of that program, the official link between the GFDL and Princeton University, that Princeton is an internationally recognized center for weather and climate studies, especially studies related to global warming."

The American Meteorological Society noted that Smagorinsky's "almost relentless pursuit of excellence at [the] GFDL set a standard for other laboratories and centers that have contributed immensely to the growth of meteorology as a science."

Smagorinsky received numerous awards and honors throughout his career, including the prestigious 2003 Benjamin Franklin Medal in Earth Science with Norman Phillips, a former principal scientist with the National Weather Service's National Meteorological Center. In its award citation, the Franklin Institute said that "their seminal and pioneering studies led to the first computer models of weather and climate, as well as to an understanding of the general circulation of the atmosphere, including the transports of heat and moisture that determine the Earth's climate. In addition, Smagorinsky played a leading role in establishing the current global observational network for the atmosphere."

Smagorinsky earned bachelor's, master's and doctoral degrees in meteorology from New York University, conducting his thesis research at the Institute for Advanced Study in Princeton in the early 1950s. After serving in a variety of positions with the U.S. Weather Bureau from 1953 to 1955, he founded the General Circulation Research Section in Washington, D.C., which was renamed as the Geophysical Fluid Dynamics Laboratory in 1963, five years before it moved to Princeton.

Smagorinsky was a resident of Hillsborough. He is survived by his wife Margaret; daughters Anne Smagorinsky, Teresa Thompson and Julia Schroeder; sons Peter and Frederick; and eight grandchildren. In lieu of flowers, the family asks that donations be made to the National Alliance for Autism Research, 99 Wall St. , Research Park, Princeton, NJ 08540.

A memorial service hosted by the Department of Geosciences and the GFDL is scheduled for 3 to 5 p.m. Saturday, Oct. 22, in Guyot Hall.