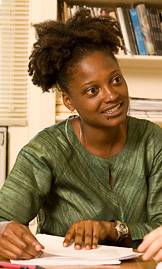 Tracy K. Smith, an assistant professor of creative writing in the Lewis Center for the Arts, is a fast-rising star in American poetry. Her collection, "Duende," has won critical acclaim and two important awards. She uses her own experience to inspire students as they develop as writers.

Below left: In leading intensive workshops and advising students in their independent work, Smith (left) pushes her students to search for meaning in their writing. Here, she meets with senior thesis advisees Catherine Richardson (center), a comparative literature major, and Jenny Xie, an English major.

From the March 31, 2008, Princeton Weekly Bulletin

Like many of her students, Tracy K. Smith started writing poetry in earnest as an undergraduate. Now a fast-rising star in American poetry, she is leading intensive workshops at Princeton — knowing from her own experience how important it is to inspire students as they develop as writers.

"I had written poems and short stories haphazardly growing up, but I never thought I could one day become a writer," said Smith. "It wasn't until I started taking workshops that I realized it was a vocation that didn't have to wait until the end of my life to pursue."

Smith's journey as a poet is well under way. She is the author of two poetry collections, "The Body's Question" and "Duende," both published by Graywolf Press, in 2003 and 2007, respectively.

The critical acclaim garnered by "Duende" is filling Smith's calendar with speaking engagements at campuses and literary events across the country. In February, the book won the first Essence Literary Award for poetry, which recognizes the literary achievements of African Americans. Earlier this year, "Duende" was a finalist for the 39th NAACP Image Award. In 2006, the collection won the James Laughlin Award of the Academy of American Poets, which is the only award for poetry in the United States given to support a poet's second book.

"It's been a delight to have Tracy with us," said Paul Muldoon, chair of the Lewis Center and a Pulitzer Prize-winning poet. "As one of the most engaging, and engaged, of early-career American poets, she brings a very vital worldview to our students." 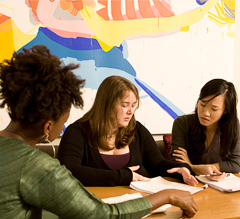 Raised in Northern California by a family that has deep roots in Alabama, Smith started her journey as a poet at Harvard University, where she graduated in 1994 with a bachelor's degree in English and American literature and Afro-American studies. Three years later, she completed an M.F.A. in creative writing from Columbia University.

During her time as a student, Smith learned from poets such as Seamus Heaney, Linda Gregg, Mark Doty and Henri Cole, but she singles out Lucie Brock-Broido as her mentor.

Smith uses her former teacher as an inspiration for her own writing as well as for the way she teaches beginning and advanced poetry at Princeton. Specifically, she says she seeks the "magic" that Brock-Broido identifies as being central to the art of poetry, which "beckons" the poet to discover the poem that is asking to be written.

To help her find the magic in her own writing, Smith said that she "thinks about what I don't yet understand, or what I'm curious about figuring out, and using my questions and curiosities as a guide."

It is this search for meaning that Smith conveys to her students. Jenny Xie, an English major who is writing a manuscript of poems for her senior thesis under Smith's guidance, said: "One of the best things about writing poetry is the feeling that you have something, or have been witness to something, that needs to be communicated. Professor Smith has taught me the importance of seeking out, in the poetic process, what it is that makes it necessary for a poem to be written."

In her workshops, Smith encourages students to take creative risks. First, she ensures that her undergraduates feel comfortable critiquing the work of their peers.

"At the start of the workshop, students often tell me in office hours that they are nervous about doing that," she said. "But by week three or four, they are already developing an extensive vocabulary for the discussion of poems. They are also doing close readings of published poems as a means of finding out what choices other writers make and what those choices enable them to do."

For Smith, seeing a student write a senior thesis in poetry is inspiring. "I think it is an exciting process because it is so compressed," she said. "Thesis students are given roughly eight months to produce a finished manuscript that's anywhere from 30 to 50 pages. In a way it's like watching a plant develop using time-lapse photography. Things start happening very quickly."

Catherine Richardson, a comparative literature major, also is being advised by Smith for her senior thesis. "I feel extremely lucky to have Professor Smith as an adviser," she said. "She has a knack for making me push my boundaries and putting into words problems in my work that I saw but could not articulate."

In particular, Richardson said Smith has helped her appreciate the importance of revision. "Revising used to torture me," she said. "I didn't know how to approach it without wanting to either rip up the poem and start over or to just change one word and call it done. Professor Smith often hands back drafts with the lines renumbered, with whole stanzas cut out or with very specific suggestions. She taught me that sometimes the line you want is already there, just in the wrong place, or that a place where an image is reiterated can be a perfect excuse to take a leap instead."

Many sources of inspiration

Smith said teaching motivates her to "live up to her own ideas" as part of her evolving writing process.

For her first book, Smith focused on her own private experience and her desire to engage with the "details and events that seemed somehow unresolved," such as her marriage and the death of her mother.

In "Duende," whose title suggests a "pixie" or "hobgoblin" originally conjured up by the Spanish writer Federico García Lorca, she charts a new course and a "deliberate pursuit of different kinds of concerns."

Elizabeth Alexander, a poet who teaches at Yale University and who was a judge for the Laughlin Award, described the effect reading "Duende" had on her: "If 'Duende' were wine, it would certainly be red; if edible, it would be meat cooked rare, coffee taken black, stinky cheese, bittersweet chocolate."

Many of the poems are political and are inspired by news reports from across the globe. They often home in on the marginalized and the unknown and employ various voices and forms.

"More and more of my poems have presented themselves as sites for exploring aspects of the world that I'd like to understand more fully," Smith said.

For example, the poem "Into the Moonless Night" is based on a story she read in The New York Times Magazine about four Ugandan high school girls who were abducted by rebel soldiers and forced to act as their wives, bear them children and also commit crimes. Ultimately, the women returned to their communities and had to find ways to fit in again.

"I remember being in my New York apartment and looking at the article and being really struck by this political struggle that I was embarrassed to know nothing about," said Smith. But what caught her imagination and empathy was the way in which the women were "pulled out of their lives and made to submit to something not of their choosing ... and then were asked to come back and pick up where they'd left off."

Smith explained that she felt a "point of connection" with the experiences of these women because of the "idea that we get derailed [in our private lives] and have to pick up and reinvent ourselves."

"Duende" contains many such connections with other beings, whether alive or dead. There is a Brazilian boy found murdered with the note that becomes the title of the poem, "I Killed You Because You Didn't Go to School and Had No Future." In the epigraph to the poem, Smith explains that it is a "note left beside the body of nine-year-old Patricio Hilario, found in a Rio street in 1989." In "Flores Woman," the poem imagines the tiny species of human that once lived on the Indonesian island of Flores 18,000 years ago, whose discovery was reported in the journal Nature in 2004. In the poem "Theft," there is a Native American boy who is shunted from one foster home to another and who comes to life for Smith from an article in The Chicago Reader. The collection even includes a self-aware street dog toughing it out in Spain in the poem "Nocturne: Andalusian Dog," which captures a moment in time from Smith's visit to that country.

Smith has learned that reinventing herself is productive as a pathway to new ideas. She relies on travel — and being an outsider — to gain access to new perspectives.

"Travel is a huge inspiration," Smith said. "Inevitably you land in a place and the smells are different and you are listening from a different part of yourself. As a visitor you become invested in what is going on around you; you also develop a persistent curiosity about what is going on behind closed doors that you don't have access to as an outsider."

Many of Smith's ideas for "Duende" emerged when she was on a writer's residency in Andalucia, Spain, an experience she connected to visits to Mexico and Brazil. A point of intersection was her interest in folk traditions, such as the flamenco, which resonated with what she learned from the oral traditions of Afro-Mestizo communities living along the Atlantic coast in Mexico.

"At the heart of these forms is a sense of survival and resistance," she said, noting that those traditions also reminded her of the storytelling practiced over the generations by her extended family. "These were different contexts where I could locate a similar thread."

Closer to home, Smith finds inspiration from the community of writers who are her fellow faculty members. She also is responsible for the Lewis Center's Althea Ward Clark Reading Series, which brings well-known authors to campus. "It is a nice way of augmenting the number of voices to which our students can be exposed. I remember from my own time as a student how important it can be to hear the writing the way the authors hear it," she said.

Already Smith is gathering ideas for her next phase of writing as she waits to see where the magic will take her. "I'm in such a new place right now that I don't know where I'm going," she said, noting that her thoughts are swirling around ideas to do with science fiction, the environment and immigration. "I'm curious about different versions of the future," she said, adding, "I am also sure that private events in my life will play a role in pulling things in one direction or another."

A species of tiny human has been discovered, which
lived on the remote Indonesian island of Flores just
18,000 years ago. ... Researchers have so far unearthed
remains from eight individuals who were just one
[meter] tall, with grapefruit-sized skulls. These
astonishing little people ... made tools, hunted tiny
elephants and lived at the same time as modern
humans who were colonizing the area.

Onto the heap where my dreaming
And my loving live.

Every day I wake to this.

Tracks follow the heavy beasts
Back to where they huddle, herd.

Hunt: a dance against hunger.
Music: feast and fear.

This island becomes us.

Trees cap our sky. It rustles with delight
In a voice green as lust. Reptiles

Drag night from their tails,
Live by the dark. A rage of waves

Protects the horizon, which we would devour.
One day I want to dive in and drift,

Legs and arms wracked with danger.
Like a dark star. I want to last.