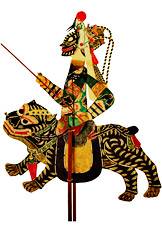 The East Asian Library is presenting an exhibition titled "Luminous Worlds" that features a sampling of its seldom-seen collection of shadow theater figures. The translucent rawhide figures, from northeast China in the late Qing dynasty period, provide a window to popular entertainment of the time and contemporary interpretations of religion, literature and music. Above, a figure of a warrior rides a black tiger into battle; tigers appear frequently in the world and underworld in Chinese folklore. (Photo: Jody Beenk)

An exhibition of vividly painted and delicately carved Chinese shadow theater figures at Princeton's East Asian Library provides a window into an enduring art form as well as Chinese religious beliefs, literature and other cultural markers.

The figures on display are part of a 2,000-plus-piece collection acquired for the Gest Collection in the 1920s but only cataloged over the last three years. Their presentation to the public is the result of an unexpected discovery and a considerable amount of diligent work by a local scholar.

The collection had been unused and stored out of the way for decades, and its storage conditions had deteriorated. When the library was renovated as part of the Frist Campus Center's creation in 2000, Martin Heijdra, the East Asian Library's Chinese bibliographer and head of public services, was faced with the question of how to improve on these conditions. The shadow figures were repackaged in tissue paper and waterproof envelopes for temporary storage.

Mary Hirsch, a local resident and scholar of Chinese shadow theater, asked to see the collection in 2006, and was given permission with the agreement that she would help describe it. A plan also was made to rehouse the collection in a permanent way, which necessitated ordering custom-made boxes. Hirsch ended up doing both a detailed catalog and the rehousing. "When we started this project we didn't know it would take three years in total. I thought it would be a few months," Heijdra said. 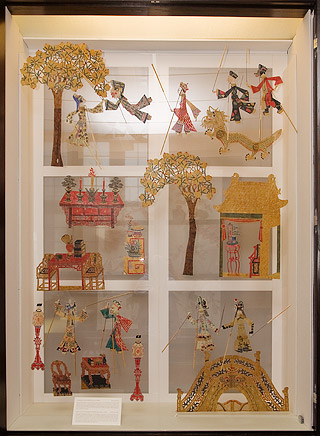 "Journey to the West," a 16th-century novel, and "The Tale of the White Snake," a folk tale often performed in Chinese opera, are two classic stories depicted through shadow figures in the exhibition. (Photo: Brian Wilson)

Hirsch worked with Heijdra to identify pieces for the final exhibition and with Jody Beenk, a library preservation specialist, to solve the technical issues on how to display them. Hirsch is the guest curator of the exhibition, titled "Luminous Worlds," which features about 200 pieces, or one-tenth of the collection.

"Previously, only four or five pieces had been loaned out to exhibitions elsewhere," Heijdra said. "Here, several themes are exemplified, with the most spectacular pieces, some referring to famous literary Chinese stories."

Susan Naquin, a professor of history and East Asian studies whose research focuses on Chinese social, religious and cultural history, said the shadow theater collection will aid researchers who focus on Chinese popular culture and ordinary people rather than the art by Chinese elites typically featured in museums.

"One of the major impediments to the study of Chinese popular culture is that the material evidence that survives is usually in poor condition, has not been systematically collected and is not always beautiful, and there is not very much of it," Naquin said. "The several thousand shadow puppet figures acquired as a unit for the Gest Collection Beijing in the 1920s are unusual and valuable sources for a genre of popular entertainment. This collection is a treasure for Princeton and for scholars of Chinese popular literature, art and culture everywhere."

During performances, the figures appear through a cloth screen backlit with a light bulb or lamp, and loud, raucous music accompanies the productions, Hirsch said. The art form, practiced in China, India and Indonesia, is more than a thousand years old.

"They were banned as traditional and backward for years" in China, said Hirsch, who translated two shadow theater plays for her master's thesis and has studied the art form for more than a decade. "They were for the entertainment of local gods and deities."

Troupes traveled from town to town performing the plays -- often featuring military or romantic storylines, with many religious references to Buddhism or Taoism -- in or near temples. Some of the plays were original, some referred to famous literature and others echoed regional operas. The loud, traditional music attracted audiences to the outdoor performances and was familiar to people who enjoyed Chinese opera and storytelling.

The figures that constitute the University's collection were made in northeast China, purchased in Beijing and are about a century old, from the late Qing dynasty period or the early years of the republic of China.

"By studying these figures, we can not only learn more about how oral tales were transposed into puppet plays, but understand regional variations in Chinese popular culture -- variations that unfortunately tend to disappear with the advent of modern mass culture," Naquin said.

A small Chinese booklet in the collection identified some of the pieces in groups, but the majority of the individual figures were unlabeled or their labels had been misplaced. Shadow figures appear in several generic types such as male lead, female lead and spirit, with the detachable head of the figure indicating its role. Some of the heads were labeled on the neck, but many had to be identified based on color and other stylistic details, Hirsch said. The collection features many more heads than bodies. "It was definitely detective work" to catalog the pieces, Hirsch said. 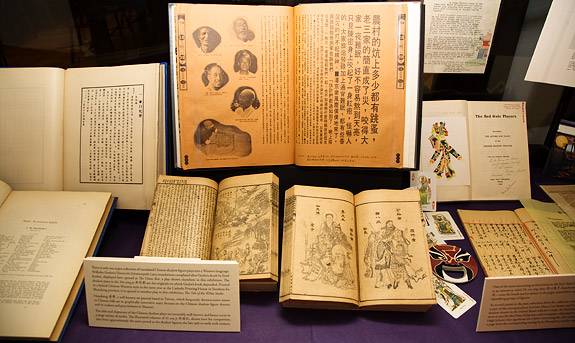 Among the exhibition items are several books and journals dedicated to shadow theater plays. A handwritten Chinese-style inventory (far right) categorizes the Gest Collection's figures by their clothing characteristics. The East Asian Library also holds the one major collection of Chinese shadow figure plays translated into a Western language, Wilhelm Grube's "Chinesische Schattenspiele" (at left), opened to "The Chaos Box," a play shown in the exhibition. (Photo: Brian Wilson)

When the work was completed, the library, which has very few pieces of art within its collection, decided to display the figures for the public. The exhibition is divided into several sections; one focuses on the creation and performance aspects of shadow theater, while the rest involve individual plays, such as an adaptation of the classic 16th-century novel "Journey to the West," or themes, such as purgatory and punishment, scholarly life and tigers.

Tigers, the University's mascot since the 1880s, have appeared regularly in Chinese theater for centuries. The exhibition includes shadow figures of tigers and warriors and demons wearing tiger skins.

Within the collection, "Chaos Box" was one of the only plays to which Hirsch found a large array of pieces and characters. The story -- the opposite of Pandora's box, Heijdra said -- features deities capturing five malevolent creatures into a small chaos box for all of eternity.

Already, faculty such as Naquin and graduate students on campus during the summer months who have viewed the exhibition have expressed interest in studying the figures more closely, Heijdra said.

The exhibition runs through Friday, Jan. 22, and Hirsch will give a talk on Chinese shadow theater titled "1,001 Heads: Animating the Universe and Mimicking the Neighbors" at 4:30 p.m. Thursday, Nov. 12, in 202 Jones Hall.

Library hours during the summer are 8:30 a.m. to 4:30 p.m. Monday through Friday. During the academic year, which begins Thursday, Sept. 17, hours will be 9 a.m. to 11 p.m. Monday through Friday, 10 a.m. to 5 p.m. Saturday and 2 p.m. to 11 p.m. Sunday. For more information, visit the East Asian Library on the third floor of the Frist Campus Center or the library's website.