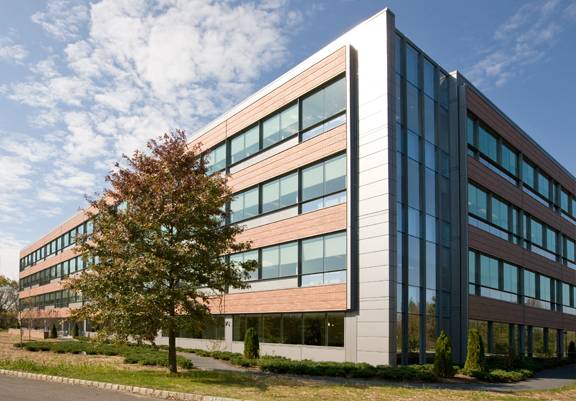 Employees in the University's finance and treasury and information technology operations are moving into the new 120,000-square-foot, four-story building at 701 Carnegie Center after a year of construction. (Photos: Brian Wilson)

During an open house Friday, Oct. 30, members of the University community toured the new facility at 701 Carnegie Center, which will be the home of Princeton's finance and treasury operations and most information technology departments.

University employees and guests gathered in the lobby of 701 Carnegie Center during the open house.

University employees and guests explored the 120,000-square-foot, four-story building, which is opening after a year of construction. The new facility will enable the Office of Information Technology (OIT) to consolidate many of its operations at one location. It also will allow portions of other buildings used by OIT and finance and treasury, including some of New South, to be repurposed to support the University's expanding initiatives in the arts.

Employees will move into the new space beginning the week of Nov. 2 through Thanksgiving. Staff members will retain the same phone numbers. Detailed move-in schedules and updated customer service information will be available on the finance and treasury website and the OIT website.

In addition to the office of Carolyn Ainslie, vice president for finance and treasurer, offices in that organization moving to 701 Carnegie will be: asset administration; budget; controller; loans and receivables; operations support; payroll, payables and taxation; purchasing; risk management; and University financials. 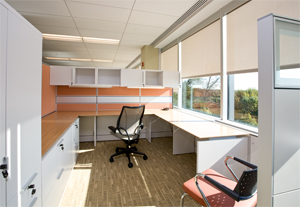 The new facility includes a variety of light-filled office spaces, including this third-floor workspace.

Maria Bizzarri, the bursar and director of loans and receivables, said at the open house that the new office layout will allow her team to work together in a unified space instead of being split into different ends of one floor in New South. This arrangement should "strengthen the team spirit of our group and reinforce collaborations," she said. Students visiting the new office also will benefit from a new, "more customer-friendly" reception area in the new space," she said.

Bizzarri added that the proximity to many OIT groups also is an asset for her team as well as others in the finance and treasury group. "We work in collaboration on a lot of projects, so it's a nice fit," she said.

Five of the six OIT departments will be moving to 701 Carnegie: enterprise infrastructure services, administrative information services, administration and finance, project and consulting services, and a portion of support services. The sixth department, academic services, mostly will be housed at Lewis Library. This includes the Educational Technologies Center, computational science and engineering support, education and outreach services, the Broadcast Center and the New Media Center. The other offices that will remain on campus are hardware support (171 Broadmead), software support (228 Alexander St.), the Humanities Resource Center (East Pyne), media services (New South), the Solutions Center (Frist Campus Center) and the data centers at 87 Prospect Ave. and New South.

This multipurpose room is among the flexible meeting and collaboration spaces at 701 Carnegie.

The 701 Carnegie building also will include computer training rooms, flexible meeting and collaboration spaces, a café with indoor and outdoor seating, and a fitness facility. OIT will conduct training classes in the new space beginning in mid-November. University Services will manage operations at 701 Carnegie as well as public events in the space. Restaurant Associates will operate Café 701.

Jeanne Mrak, a technical trainer in OIT's administration and finance group, welcomed visitors to one of the first-floor training rooms at the open house. Mrak, who leads Microsoft Office and Web design training courses, said she is "ecstatic" about the new space.

"It's nice to be able to welcome our classroom participants into such a professional, comfortable environment," she said. 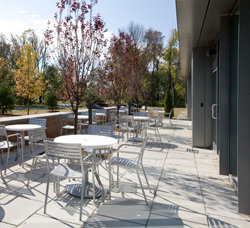 Prior to the open house, Ainslie said that knowing the move to 701 Carnegie will create more room for academic space under the Campus Plan "is an important aspect of our feeling good that our move supports the academic mission. With that said, moving and change, in general, are difficult and we have been working to make this as easy as possible for employees who have spent a good part of their working career on the beautiful Princeton campus," she said.

"Our new 'near-campus' location is of high quality and has been designed for our use, which is a real plus in our transition. The floor plans are arranged for a lot of light and storage and a mix of meeting and office space that will facilitate new interactions between workgroups," she said, noting that new workgroups recently have been formed, such as the consolidation of invoice processing, accounts payable and travel accounting. 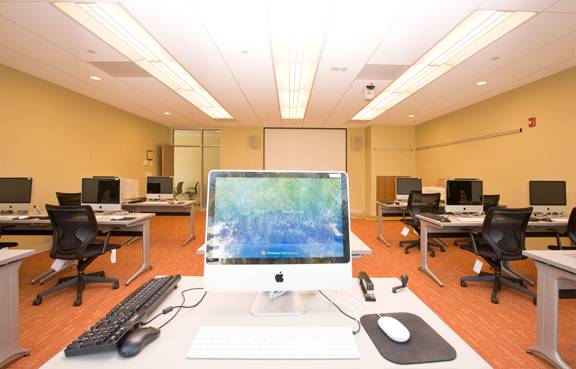 The Office of Information Technology will conduct classes in the computer training rooms at 701 Carnegie.

Ainslie said that her team's preparation for the move "has been a major effort that has benefited our readiness to move and new approaches to filing and archiving the institution's financial data," including shredding 12,000 pounds of old paper. As part of the move, her office is working on new and enhanced customer services, including greater electronic access to forms and requests, a new website and a location for an on-campus kiosk for dropping off and picking up forms. 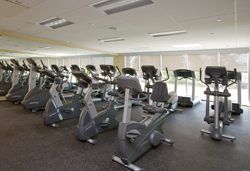 Amenities for employees working in 701 Carnegie Center include a fitness center.

In addition, Ainslie said, "Sharing the building with OIT will enhance our collaborative efforts and our use of technology in finance and treasury."

Betty Leydon, vice president for information technology and chief information officer, said the consolidation of OIT staff from five buildings into 701 Carnegie will make it easier for her staff to collaborate on projects and to serve the campus community.

This second-floor conference room is one of the many meeting spaces throughout the four-story building.

"Also, being in one location with a café and a fitness center will foster casual interactions, something that I'm sure will lead to new friendships and better working relationships," she said. "The move also will give us a chance to clean out the clutter in our offices, and we've all made a commitment to doing that."

Leydon added, "We hope the move will benefit the campus community members we serve by improving our ability to respond quickly to technical questions and problems, since the support and operations center, including the OIT help desk, will be located at 701 Carnegie close to the technical staff who work on IT problems." 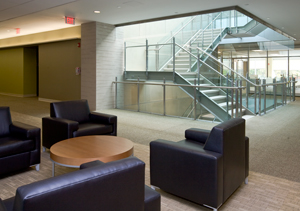 This second-floor lounge provides a view of the building's bright stairway.

Campus community members will make use of the new training facilities and benefit from "a number of collaboration spaces equipped with appropriate technology where our customers can work face-to-face with OIT staff on IT projects. Finally, we hope the move will give both OIT and the campus community members we serve an opportunity to look, with a fresh eye, at ways to use technology to connect to each other and work more effectively on IT projects," Leydon said.

Visitor parking is available at 701 Carnegie, which is located between Princeton Overlook and Princeton MarketFair and has access from Canal Pointe Boulevard and Route 1. The Tiger Transit West Extension Line also provides service to and from the building.

The University is leasing the building from Boston Properties.

UPDATE: Power back on at 701 Carnegie Center

New South to be renovated for inclusion of arts programs