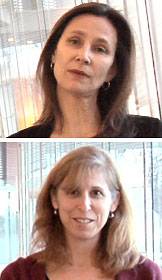 Susan Marshall (top), director of the Program in Dance in the Lewis Center for the Arts, and Naomi Leonard (bottom), professor of mechanical and aerospace engineering, collaborated on a science and dance project called “Flock Logic,” which was performed by students and Princeton community members. The cross-disciplinary project was supported by the Princeton Atelier.

The unusual sight of dancers behaving like flocking birds recently in some of the indoor common spaces on the Princeton campus was inspired by a collaboration between two Princeton faculty members that merged science and art.

A video of "Flock Logic," presents a profile of a project led by Naomi Leonard, Princeton's Edwin S. Wilsey Professor of Mechanical and Aerospace Engineering, and Susan Marshall, director of the Program in Dance in Princeton's Lewis Center for the Arts, that brings together the art of dance and the study of the way animal groups move together.

The effort was born in October 2009, when Leonard discussed her research in a talk titled "Flocks and Fleets: Collective Motion in Nature and Robotics" as part of the President's Lecture Series. Leonard's talk described efforts by her and others to understand how bird flocks and fish schools move in patterns that seem highly choreographed, and then to apply these principles in designing robotic devices that work with unprecedented efficiency.

In the audience was Marshall, an internationally renowned artist who had recently joined the Princeton faculty. After the lecture, Leonard received an e-mail from Marshall, who proposed that they combine their interests and explore some of these flocking ideas with dancers.

The collaboration between Leonard and Marshall -- both recipients of MacArthur Foundation "genius grants" -- fit perfectly with the spirit of the Princeton Atelier, an academic program created by Professor Emeritus Toni Morrison to support professional artists who come to campus for intensive collaborative work with students and faculty. The beauty and complexity of animals in motion such as bird flocks and fish schools inspired Leonard and Marshall to create a class with dancers and students that culminated in two cross-disciplinary, cross-species performances. The performances, developed by students in the Atelier course, were held Dec. 5 and 6 in the Icahn Laboratory atrium and the Rockefeller College common room, respectively. 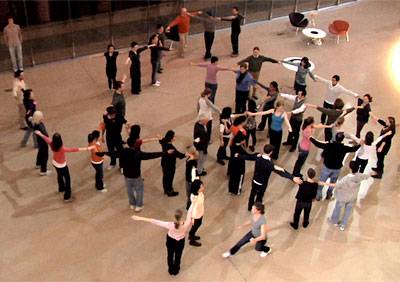 The beauty and complexity of collective motion seen in groups such as bird flocks and fish schools inspired the "Flock Logic" project, which brought together the art of dance and the study of the way animals move together.

The basic rules of flocking -- the way biologists understand how animals stay together in a group and avoid colliding -- depend on cohesion and repulsion, according to Leonard. By introducing dance and performance into Leonard's scientific theories about flocking, Marshall aimed to explore how the rules of flocking might be put to artistic use and also possibly discover something about the ways in which people, as opposed to fish, sense and respond to others in a group.

Leonard's work closely examines the mathematical rules associated with sensing and dynamic response that govern the movements of individuals in a group. "The understanding about this collective motion that you see in animal groups emerges not from a prescribed choreography and not from even a designated leader in the group, but rather from these simple rules of response that each individual in the group obeys," she said.

When the Atelier class was just the spark of an idea, sophomore Willa Chen, a dancer and computer programmer, worked with the two professors to create an online simulation program that would later help shape the class. With this simulator, Chen could program rules of flocking that would inspire choreographic movement, such as maintaining distance between dancers and avoiding obstacles.

"I love dancing, I love computer programming and this just combines the two perfectly," Chen said.

According to Marshall, performances based on principles such as those found in animal flocking are not unusual.  "In dance, we have something called structured improvisation, which is a compositional approach in which people agree on rules," she said. "They're often very complicated dance rules and instructions … and yet the specific outcome of the dance is unknown."

The "Flock Logic" performances, which included students, professional dancers and volunteers from across campus who were given training beforehand, appeared choreographed though they were simply following the rules of flocking as found in nature.

The Atelier course and the dance rehearsals and performance attracted a diverse group of people who were interested in dance, science or were simply curious and willing subjects. Ultimately, the motivating factor for the professors was the desire to create an event that would engage a cross-section of the community in the collaborative exercise of flocking, one in which participants could experience movement as both science and art.