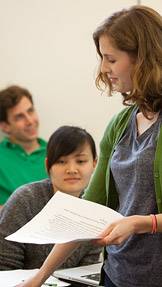 The class "American Environmental History and Thought" allows undergraduates to explore the links between environment and development in the United States. Students read a range of environmental literature, and have many opportunities to present ideas to classmates, as does senior Aarian Marshall, shown here.

Instructors: Deborah Popper and Frank Popper, who are both visiting professors of civil and environmental engineering and at the Princeton Environmental Institute (PEI) at Princeton University. Deborah teaches geography at the College of Staten Island and the Graduate Center, City University of New York. Frank teaches land-use planning at the Bloustein School of Planning and Public Policy at Rutgers University. Their research focuses on regional planning, especially in depopulating places like remote rural areas, the Great Plains and shrinking cities.

Frank Popper said, "The course introduces students to the best environmental literature we've ever taught; it's fun, and the students respond to it." The Poppers have assigned Henry David Thoreau's "Walden" (1845) as the founding text, and a range of writers, including Walter Prescott Webb's "The Great Plains" (1931), Rachel Carson’s "Silent Spring" (1962), Joan Didion's "Where I Was From" (2003) and "The Essential William H. Whyte" (2000). Whyte graduated from Princeton in 1939.

The Poppers typically teach side by side and engage the students in lively discussion, often presenting contrasting views. "There are a lot of students in our classes at Princeton who have never seen a married couple teach, so we provide a different teaching example for the students," Frank said. "Some of them visibly enjoy our back-and-forth banter. We tell them right at the beginning of the semester that we don't always agree, but they seem surprised when we deliver on that!" 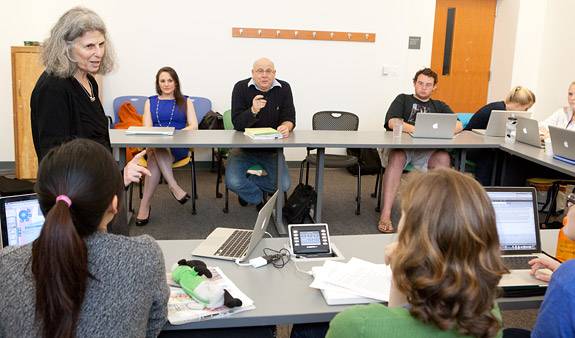 The course is taught by Deborah (left) and Frank Popper (second from left at back table), whose research focuses on land use and regional planning. The Poppers are both visiting professors of civil and environmental engineering and the Princeton Environmental Institute.

Key areas of focus: The course centers around the similarities and differences between rural, suburban and urban areas in the United States; the history of the American environmental and conservation movements; and the forces underlying the on-the-ground changes in different regions.

The class focuses on how American thought about the environment has evolved since the 1830s. Students learn how perceived values about different landscapes and land uses have developed and altered the American farming, energy, manufacturing, service and government sectors. The Poppers encourage their students to think of the United States broadly as a place with many different kinds of spaces, while paying particular attention to the splits and overlaps between urban and rural landscapes in an environmental context. They urge them to consider questions such as, What does wilderness mean? What is the difference between a national park and an urban park?

According to the Poppers, the overview helps students understand how political, societal and economic forces in the United States shaped each writer's thoughts about the environment, and in turn, how their writings influenced environmental consciousness in this country.

"We explore the march of the environmental movement across the country as various landscapes turned from one form to another depending on how natural resources are used," Deborah said. "We study the differences between the environmental and conservation movements, and the questions environmental activists began to ask, such as, Have we overused these lands? What are the threats to the environment? How should 'appropriate use' be defined?" 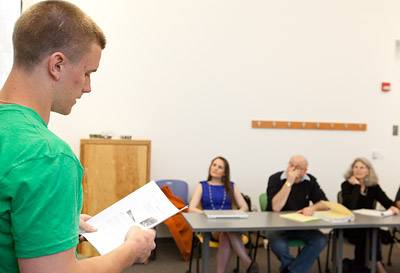 Senior Chad Wiedmaier presents his final project to the class. The seminar emphasizes a discussion-based environment, with the Poppers offering a team approach in presenting material, often from different viewpoints.

Inspiration: In 2009, Frank Popper taught the course on his own, but since then it has been taught by the couple. Deborah, as Frank describes it, had a "major brainstorm about teaching the course as a 'great books' course.'" Deborah explained, "Frank used a good anthology, but I became frustrated by assigning snippets because they meant that the students were only getting a flavor for the author. They weren't reading the entire books and understanding their time and place. The students were aware of many of the writers — they had all heard of Rachel Carson, for example — but how many students had actually read more than just a little bit of her work?" As a result, the Poppers changed their approach.

Students say: Senior Clay Blackiston, a philosophy major, said, "I heard great things about the Poppers from some of my friends. I had never taken a course on environmentalism and wanted to learn a little more about what everybody is talking about when they mention 'sustainability.' This is the second history class I've taken at Princeton, so I've benefited a great deal from learning about the different modes of thought throughout different time periods and from studying various authors and the ways they shaped the American zeitgeist." 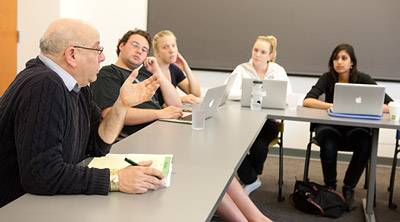 The seminar centers around "great books," allowing students to get a vivid sense of many of the key American writers of environmentalism from the mid-1800s to the present.

Junior Alexander Katz, a major in the Woodrow Wilson School of Public and International Affairs who is pursuing certificates in environmental studies and East Asian studies, said he took the course because he "wanted the chance to work again with Professors Deborah and Frank Popper. I was fortunate to have taken a previous class with them (ENV 305: 'Topics in Environmental Studies — Building, American Style: Land-Use Policies and Rules') and had an outstanding experience in the class. They have a great dynamic and bring enormous energy and enthusiasm to the subject matter, which is ideal for a seminar. Also, as a candidate for the environmental studies certificate, I wanted a chance to study some of the seminal thinkers and texts of the environmental movement. One of the major goals of the course has been to identify core themes and turning points in the history of environmentalism. I believe that understanding the evolution of this movement is critical in order to examine the best approach for solving future environmental challenges. I think my experience in this class, as well as in ENV 305, has influenced me to take future environmental studies classes and address environmental questions in my independent work."

Senior Alana Tornello, who is majoring in comparative literature and earning a certificate in environmental studies, said, "I took 'American Environmental History and Thought' because I realized that I understood little about the history that had inspired my work in the [environmental] field. I had also heard that taking a class with Professors Frank and Deborah Popper was a fascinating experience. They have collectively stored so much knowledge on the subject and yet it is always funny to see them quarrel and expand on each other's comments. It really gives a fuller and more personal approach to the subject. I think that the greatest impact that the course has had upon me is that its comprehensive approach of American history also includes the environmental study of cities and suburbs. My work has almost predominantly concerned rural areas and local watersheds, but certainly our cities and neighborhoods are also part of our environment and are intricately tied with nature. Studying the development of housing and urban planning as part of environmental history was a fascinating approach."