On the eve of Dec. 20, 2012, while the international news media were reporting on the alleged "end of the world" predicted by the ancient Maya calendar, six Princeton students and their professor were in Guatemala to experience the phenomenon firsthand.

The one-week trip was part of the undergraduate course "The Politics of Ethnicity in Latin America," taught by Timothy J. Smith, a visiting research scholar in the Program in Latin American Studies (PLAS) and visiting assistant professor of anthropology. The seminar focused on indigenous representation, social movements and ethnicity in Latin America, and the trip was designed to introduce students to particular themes including governance, economic transformations, tourism, religion and history. The trip was sponsored with the generous support of PLAS, the Department of Anthropology and the Fred Fox Fund.

"Our overall objective was to see how competing interpretations of the Dec. 20 events — doom vs. dawn, non-indigenous vs. indigenous, etc. — played out on the ground," Smith said. 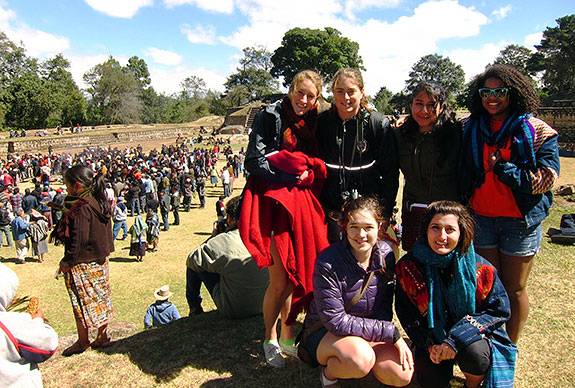 During a one-week trip to Guatemala to learn about social movements and ethnicity in Latin America, six Princeton students, above, and their professor, Timothy J. Smith, observed the celebrations marking the alleged "end of the world" predicted by the ancient Maya calendar on Dec. 20, 2012. (Photo by Timothy J. Smith)

"On Dec. 20 we arrived in Tecpán. Just outside of the town limits is the pre-Columbian site of Iximché — which was a thriving urban space in the early 16th century when the Spanish arrived and remains a popular tourist destination in present-day Guatemala — an excellent place to spend the 'end of the world,' or more accurately, 'an end and a beginning.' Indigenous leaders and spiritual guides had planned ceremonies and political events at the site to mark the event.

"A number of fires had already been started and new ones were being initiated so students were able to see ceremonies from beginning to end and take note of the differences between the larger ceremonies — to which a handful of tourists arrived — and the smaller ones in a different part of the site, which tended to be family-oriented and more personal. By 11 p.m., we were ready to commemorate the end of the Maya cycle.

"I gave the students an overview of indigenous spiritual practices and explained to them that the Long Count was the name given to a calendar system used by a number of Mesoamerican groups before the arrival of the Spanish. It is usually associated with the Maya civilization as it started to appear in increasing numbers starting in the first and second centuries as a calendar to provide historical dates for events (although we find earlier uses of it by other cultures). It allowed scribes to count the number of days that had passed since the creation of the current era. All of the media frenzy about the 'end of the world' according to this calendar had to do with the fact that in this system, the largest common block of time was set to come to 'completion.' 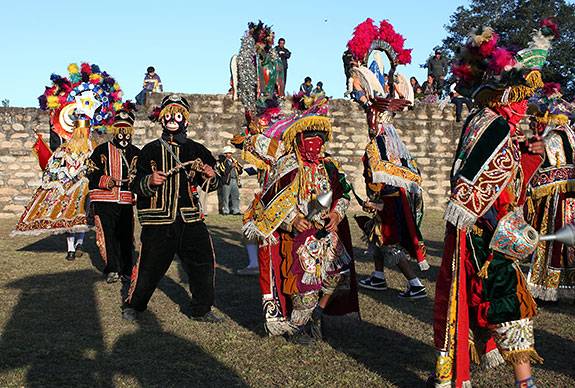 The ceremonies — which in fact marked the end of an era, not the end of the world — included a performance of the Dance of the Moors, which tells the story of the expulsion of the Moors from Spain during the Reconquista, performed today by indigenous groups as a marker of their heritage. (Photo by Timothy J. Smith)

"One of the two main areas in which ceremonies were being held was the stage for a group of more than 100 indigenous and non-indigenous Guatemalans, as well as a few dozen foreigners. An inner circle around one large fire was made up of indigenous spiritual guides, photographers and a few spectators. The spiritual guides took turns offering prayers in both Kaqchikel Mayan and Spanish, stopping in between to explain to the crowd what the calendar 'cycle end' meant for them — essentially, the beginning of a new count, a new era.

"At the stroke of midnight, the entire group was asked to systematically kneel down in the four cardinal directions while the spiritual guides prayed to ancestors and various elements of the cosmos. The crowd quickly dispersed after midnight.

"The next day, Dec. 21, we returned to the site early in the morning to see the commemoration of a new stela — a large upright stone with hieroglyphic inscriptions — that had been erected in conjunction with the 'new era.'

"In a strategic move, reflecting pan-Maya activism and cultural revitalization interests, the indigenous intellectuals responsible for this creation had collapsed space and time by inscribing on the stela historical events — independence, war, revolution, genocide and the 1985 Constitution — all written in hieroglyphs (which have not been in systematic use since the ninth century!).

"What the students learned was that the alleged 'apocalypse' stemmed from not just misinterpretations of the Maya calendar — which did not predict the end of the world at all — but also from a fascination with it. The key thing here is that the scribes who recorded history using the Long Count didn't say anything about the world ending or about a new era. Both of these 'interpretations' are incorrect. If anything, the frenzy signals an appropriation by foreign opportunists who have enjoyed commercial success by the authoring of books and movies about the 'Maya apocalypse' or 'doomsday prophecy.'

"What we were interested in understanding, however, was how indigenous leaders today had reclaimed this cycle of time and reinterpreted — through their own cultural interests and agendas — the symbolic importance of the event. It was the end of the 13th b'ak'tun — (a b'ak'tun is a count of 144,000 days, nearly 400 years). It marked an ending and a beginning — the start of a 'new era,' which in and of itself could be interpreted as a joyous event given the hopes and aspirations that spiritual guides expressed to onlookers."