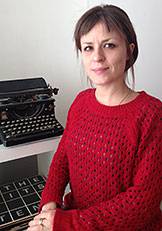 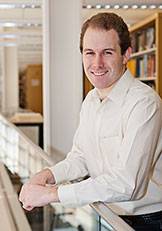 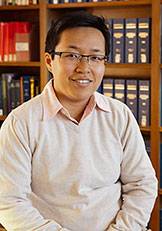 Princeton University graduate students Angèle Christin, Laura Gandolfi, George Young and Jiaying Zhao have been named co-winners of the Porter Ogden Jacobus Fellowship, Princeton's top honor for graduate students. The fellowships support the final year of study at Princeton and are awarded to students whose work has exhibited the highest scholarly excellence.

Christin, a doctoral student in the Department of Sociology who came to Princeton in 2008, earned her undergraduate degree from the Ecole Normale Supérieure (ENS) and a master's degree in social sciences from ENS/Ecole des Hautes Etudes en Sciences Sociales, Paris.

Christin's dissertation focuses on the development of online media and how it can be used to illustrate the changing nature of work in modern society. "I contrast the way in which similar mechanisms — technological and organizational changes — play out differently in the United States and France, with different consequences for the future of the press," Christin said.

Her adviser Kim Lane Scheppele, the Laurance S. Rockefeller Professor of Sociology and Public Affairs, called Christin a "spectacular sociologist in the making." She said Christin's dissertation is "a project that is hugely ambitious in terms of its potential impact on a number of fields of sociology."

Christin hopes to pursue a career in either American or French academia. "I believe that promoting dialogue between the American and the French sociological traditions is the most promising avenue of inquiry that I can pursue," she said.

Gandolfi, a Ph.D. candidate in the Department of Spanish and Portuguese Languages and Cultures, earned bachelor's and master's degrees in Spanish and English at the University of Trieste, Italy. She joined Princeton's graduate program in 2008.

Gandolfi's dissertation examines the intersections between the written, visual and material world in 19th-century Mexico. To do so, she is studying canonical Mexican literature as well as catalogs, photo albums, illustrated magazines and advertising from that era.

Her adviser Rubén Gallo, a professor of Spanish and Portuguese languages and cultures, said Gandolfi has chosen "an original and fascinating topic that will allow her to combine cultural and literary analyses with theoretical discussions of commodity fetishism."

Gandolfi said she is looking forward to expanding this work as a scholar and a teacher. "I intend to train my future students in the close reading not only of literary texts, but also of other cultural objects, and to prompt them to elaborate critical hypotheses from these interdisciplinary intersections," she said.

Young, a doctoral student in the Department of Mechanical and Aerospace Engineering, studied as an undergraduate at the University of Adelaide, Australia, focusing on mathematics and engineering. He joined Princeton's graduate program in 2008.

Young's dissertation centers on developing algorithms for the next generation of biologically inspired robots that can extend the use of automation in unstructured environments. To do this, he is studying how relatively simple organisms working together in nature — such as birds — can efficiently perform complex behavior. In addition, he is investigating ways in which individual robots, when working together, can improve performance of their team with only limited knowledge of the rest of the group.

Pointing to his "passion for research and teaching," Young said he is interested in an academic career, perhaps after first working outside academia. "The pursuit of new knowledge and new ideas will last as long as humankind, and I believe that one of my great opportunities is to help teach and inspire more students to gain the technical knowledge required to follow their dreams," he said.

His adviser, Naomi Leonard, the Edwin S. Wilsey Professor of Mechanical and Aerospace Engineering, said: "George is one of the most brilliant graduate students I have met in the course of my 17-plus years on the faculty at Princeton. George has the talent, creativity, independence, motivation and all the other skills and characteristics that make for a successful research and teaching career."

Zhao, a Ph.D. candidate in the Department of Psychology, earned her bachelor's degree from American College Dublin. She joined Princeton's graduate program in 2008.

Zhao's adviser, Daniel Osherson, the Henry Luce Professor of Psychology, said Zhao is "destined for a brilliant career in cognitive science." He noted that "with uncanny energy, insight, patience and good humor, Jiaying is carrying out research in several cognitive psychology laboratories at Princeton, and producing innovative, valuable studies in each."

Zhao's far-reaching research is exemplified in her dissertation, which examines how the mind works to detect structure from the environment. She also is exploring how learning new information updates existing knowledge and beliefs. Beyond the lab, she has been conducting field experiments to investigate how poverty impacts basic cognitive abilities.

"These studies have not only produced fascinating insights about cognition, but also reinforced my lifelong passion about exploring the core processes of the mind," Zhao said. After graduate school, she will be an assistant professor in psychology at the University of British Columbia.