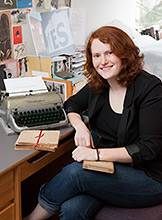 Thirteen sophomores are winners of this year's Dale Summer Awards, which provide a $4,000 stipend to pursue a summer project not connected to their academic coursework. The recipients and the titles of their projects are:

Princeton University senior Flora Thomson-DeVeaux has met Santiago Badariotti Merlo again and again, in her courses and in her travels, though their paths have never crossed in real time.

Now Thomson-DeVeaux, the 2013 winner of the Martin Dale Fellowship, will spend the next year tracing the butler and writer's footsteps across the Americas. She will delve deeper into his life and writing, which intersect with several themes over the course of the 20th century — the rise and decline of two of Latin America's biggest cities, economic and class history, and attitudes about homosexuality. She plans to turn her senior thesis on Badariotti Merlo, who was born in 1912 and died in 1994, into a full-length book.

The fellowship, created by 1953 Princeton alumnus Martin Dale, provides a $30,000 grant allowing a senior to spend the year after graduation on "an independent project of extraordinary merit that will widen the recipient's experience of the world and significantly enhance his or her personal growth and intellectual development."

"Flora made a wonderful case for regarding this quirky Argentine butler as a figure capable of illuminating significant areas of 20th-century Latin American culture and also as a fascinating individual in his own right," said John Hodgson, dean of Forbes College, one of Princeton's six residential colleges, and the fellowship's adviser. "She has demonstrated that the essential archives for her project are available, and she has also demonstrated an ability to follow up intelligently on unusual allusions and make sense of unconventional clues, so we are confident that she is well prepared to make the most of this Dale Fellowship opportunity."

A member of Phi Beta Kappa, Thomson-DeVeaux, of Charlottesville, Va., is majoring in Spanish and Portuguese languages and cultures and pursuing a certificate in Latin American studies. She speaks Spanish and Portuguese fluently and has studied abroad in Argentina, Brazil and Spain during her college years. After her fellowship year, Thomson-DeVeaux plans to attend graduate school to study Luso-Brazilian and Latin American studies further, using the $34,000 Beinecke Scholarship that she was awarded in 2012. She hopes ultimately to settle in Rio de Janeiro.

Thomson-DeVeaux developed her interest in Latin America during her first semester at Princeton, through a freshman seminar on the Argentine author Jorge Luis Borges and an introductory Portuguese class. She was introduced to Badariotti Merlo in a Brazilian cinema course the following semester, when the class watched a documentary on this unusual figure who had served as a butler to a Brazilian ambassador (the filmmaker's father) and who wrote in his spare time 25,000 pages on the history of aristocracy, spanning 6,000 years from the ancient Mesopotamian city of Ur to the modern era.

The next year, she met the documentary's director, João Moreira Salles, when he taught a course at Princeton. During her junior year, she spent several months working at the Instituto Moreira Salles, where she was conducting research on a paper about the tango in Brazil, and where Badariotti Merlo's papers were being stored, though they were not part of the cultural center's archive.

With a summer research grant, Thomson-DeVeaux returned to the institute to read Badariotti Merlo's papers. The material, written over nearly 60 years, is divided into bundles tied together with red ribbon, and it contains 570 categories and subcategories, each representing a dynasty, family or country. Written in French, Spanish, Portuguese, English and Italian, it also includes entire books in translation, such as a history of the Italian city of Florence by French author Camille Mauclair, and most, if not all, of "The Medici," G.F. Young's two-volume history of the Florentine family. The papers became the foundation for her senior thesis.

"Nobody had read them," she said of the papers, which were unpublished. "I was seduced by the idea of being the first reader of this manuscript."

Thomson-DeVeaux's thesis adviser, Pedro Meira Monteiro, an associate professor of Spanish and Portuguese languages and cultures, said that she is an "extraordinary critical reader" and "a wonderful writer" whose biography of Badariotti Merlo "will help us understand Latin America and the importance of exiles for its literature and culture."

"It's an uncommon project about an eccentric figure," Meira Monteiro said. "Following Santiago's steps will allow her to recreate a subject who was at the same time at the center and at the margins: As the Argentinian butler of a Brazilian politician and ambassador, Santiago was witness to the history of the elites in 20th-century Brazil, at the same time that he was marginal in so many aspects: as a homosexual, as a foreigner and as a cultivated eccentric figure who was writing a 'universal history' of the nobility when the nobility had vanished."

In the course of her research thus far, Thomson-DeVeaux visited a friend of Badariotti Merlo's who had kept his belongings in a barn in the small town of Aperibé (about 165 miles from Rio) for 20 years, and she began making an effort to preserve some of those items. She also tracked down a niece in Argentina who will provide Thomson-DeVeaux with access to Badariotti Merlo's autobiography.

"There's so much about his life that I don't understand. …I feel a duty" to look deeper into his life, Thomson-DeVeaux said. "In part, it's this conviction that it's a superb story. In part, I feel responsible for Santiago, for his works. I feel I've become the curator."

By retracing Badariotti Merlo's travels, she hopes to connect his story to the present, and to make it accessible to Brazilians, Argentines and Americans who are unfamiliar with the writer. Over the last few years, she also has developed a personal connection to the writer.

In her fellowship proposal, she wrote that she feels a parallel between her upcoming trip and one that Badariotti Merlo took to Italy to trace his family's roots, citing the writer's diary. Wrote Badariotti Merlo, "Now I can say I, too, have walked where they trod so many years before."