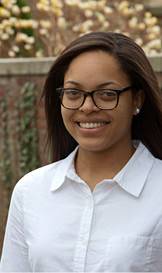 Princeton senior Danielle Pingue, who is concentrating in the Woodrow Wilson School of Public and International Affairs and pursuing a certificate in African American studies, focused her senior thesis on the ways in which nonprofits are contributing to policy reform in the criminal justice system. Her research spanned a variety of source materials and included several interviews with individuals from nonprofits, government and education.

At the 2011 Princeton conference "The Imprisonment of a Race," Danielle Pingue learned that nearly half of the 2.3 million people incarcerated in the United States are African Americans. The statistic startled the Princeton sophomore, igniting an interest in the criminal justice system that would later help define her senior thesis topic.

"I had had an understanding of what mass incarceration was, but this conference helped me learn what was being said about the issue," said Pingue. "It sparked something in me to research more."

Her thesis submitted this spring, "Partners in Crime: Non-Profits' Promising Approach to Mass Incarceration Reform," shows how nonprofits are contributing to policy reform in the criminal justice system. It focuses on the work of three organizations — The Sentencing Project, the NAACP Legal Defense Fund and the American Civil Liberties Union's Racial Justice Project.

Pingue said the word "promising" in the thesis title is significant.

"By 'promising,' I mean that nonprofits are working to address three core elements of mass incarceration: its large scale, covering all of the United States; its punitive policies; and the discriminatory application of these policies to entire groups of racial minorities," Pingue said. "My hypothesis was of course they are promising, but maybe not necessarily in the ways I originally imagined," she added. 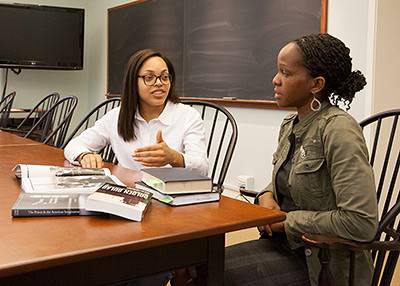 Pingue was inspired to choose Imani Perry (right), professor of African American studies, as her thesis adviser after taking her course "Race and the American Legal Process" sophomore year.

Pingue is a concentrator in the Woodrow Wilson School of Public and International Affairs and is also pursuing a certificate in African American studies. She has been an intern with the Center for African American Studies for her four years at Princeton.

"There's no mention of race in the laws that govern this country, but the class was about how even when laws are facially neutral, lawyers, policymakers and legislators often interpret and apply the laws in ways that have really had detrimental effects," Pingue said. Last fall, she took another class with Perry, "Law, Social Policy and African American Women."

Perry observed that Pingue's topic is especially relevant in the current political and economic climate.

"The problem of racialized mass incarceration devastates communities, families and individual lives," Perry said. "I'm very impressed by Danielle's research into the range of policy recommendations and lobbying efforts of nonprofit organizations working on how to address this problem. Danielle deftly analyzes both the challenges to and possibilities of their proposals and initiatives in light of political and budgetary constraints," she said.

Pingue said one of the most valuable ways Perry helped her was allowing her to make mistakes. "She would say, 'If you're passionate about doing it, do it the way you'd like to do it, and then let's come back to the drawing table if it doesn't work.' She became more than my adviser. She became my mentor and my friend," Pingue said.

"Danielle's work is an honest confrontation with a real-world crisis, and yet she maintains a profound sense of hope and possibility throughout. This is precisely how we want Princeton students to contribute to the world, as knowledgeable, serious and passionate global citizens who use their intellectual gifts to make meaningful contributions," Perry said.

Gathering insight from a range of sources

She also conducted nearly a dozen interviews with directors and senior project managers at nonprofits, as well as representatives at state and federal departments and educators, some of which were the result of unexpected connections that came out of conversations with friends about her thesis topic.

Pingue said that a fellow student at Princeton shared her insights as a volunteer at the Garden State Youth Correctional Facility in Yardville, N.J., as well as stories of family members and friends who have been incarcerated. "She challenged me," Pingue said. "She commented that even though my thesis focused on policy reform, saying something about the 'other side' — those working day to day work with prisoners — was important to my understanding of the issue."

Her friend helped tether her to her argument as she discovered ways to include that other side, such as citing the work of critics like Michelle Alexander — a civil rights lawyer, legal scholar and author — "who feel very strongly about the impact that on-the-ground mobilization can have on reforming mass incarceration," she said.

Pingue had met Alexander at the "Imprisonment of a Race" conference at Princeton. She also spent a day with another panelist, Marc Mauer, founder and executive director of The Sentencing Project in Washington, D.C. There she learned how policymakers and legislators use the nonprofit's research.

"For example, The Sentencing Project's research on felon disenfranchisement shows which states have the most severe laws and what impact that has on issues such as prisoners' voting rights," Pingue said. "Scholars have used this research to write papers that are then brought to the attention of senators, policymakers and legislators. The Sentencing Project provides the proof, the effects of legislation. A policymaker may then say, 'This is the effect of my policy, and that is the effect I don't want, so let me try to change it.'"

Pingue said the thesis experience helped her discover the potential of her own scholarship. "The entire process of my thesis was my thoughts, my ideas. To have had that at this stage in my life has equipped me with not just research experience but confidence in my scholarship and confidence in my ability to talk about issues that are really pertinent in the world," she said.

Pingue, who was born in Jamaica and moved with her parents to Worcester, Mass., when she was 10, will enter Harvard Law School in the fall. "Whenever I talk about the law or policy or a case I get all giddy and excited," she said. She is a self-described addict of the U.S. Supreme Court-focused website SCOTUSblog and obsessively pores through LexisNexis to read about legal cases.

After law school she hopes to enter politics, perhaps as a senator working with disadvantaged communities. "But my long-term goal is to go back to Jamaica and work on social policy and developmental issues, bringing the work that I've learned in the United States back to my birthplace," she said.

She already has one Capitol connection. As a Jackie Robinson Foundation Scholar, Pingue was invited to the White House on April 2 for an advance screening of the Robinson biopic "42," where she met First Lady Michelle Obama, a member of Princeton's Class of 1985.