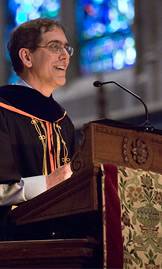 Opening Exercises marks the beginning of the academic year at Princeton University with music, student awards, readings from religious and philosophical traditions, and an address by President Christopher L. Eisgruber. Above, Eisgruber speaks to students about the ways in which honor shapes the Princeton experience and the individual. 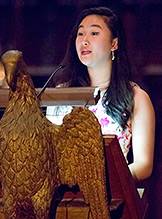 During the interfaith service, junior Naomi Lee reads a Chinese blessing amidst other student readings from the Christian, Hindu, humanist, Jewish and Muslim traditions.

As Princeton University President Christopher L. Eisgruber welcomed the incoming Class of 2017 at Opening Exercises on Sept. 8, he told students they shared an important connection.

"I will always feel a special bond with those of you who arrive here as the Class of 2017 because this year we will embark on exciting new Princeton journeys together," he said.

In his first formal speech to students as president, Eisgruber — who took office on July 1 — expounded on the joys of collegiate life, the unanticipated possibilities that lie ahead and the ways in which honor shapes the Princeton experience and the individual. 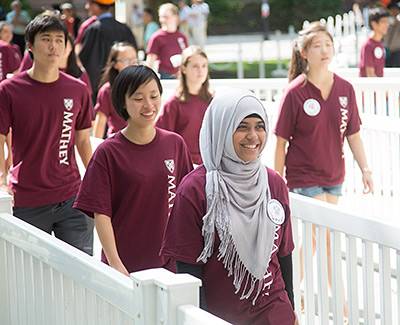 Students filed into the chapel in groups representing Princeton's six residential colleges, each led by a student carrying a colorful banner bearing the college shield. The procession was bookended by African drummers, and faculty members and administrators in traditional academic robes and regalia.

As the students took their seats, some looked skyward at the awe-inspiring architecture, others peeked over their shoulders to take in the sea of fellow freshmen, and many waved to new friends — the crowd awash in multicolored light from the sunshine streaming in the chapel's stained glass windows.

The ceremony, a tradition dating to at least 1802, included music and an invocation by Alison Boden, dean of religious life and of the chapel. Valerie Smith, dean of the college, recognized the recipients of undergraduate academic prizes. Also on the program were student readings from various religious and philosophical traditions, as well as a prayer and benediction given by Deborah Blanks, associate dean of religious life and the chapel.

Calling the incoming class "an extraordinarily accomplished, inspiring and diverse group," Eisgruber noted that the 1,286 students hail from 46 states, as well as the District of Columbia and 54 countries outside of the United States. He added that this year's 582 new graduate students come from 230 colleges and universities around the world, "further exemplifying that Princeton is indeed a truly global institution." 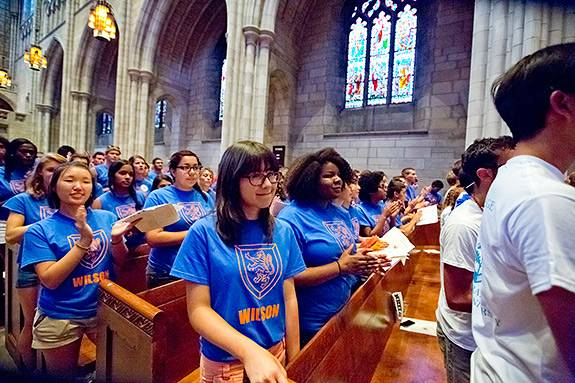 This summer Eisgruber, the Laurance S. Rockefeller Professor of Public Affairs in the Woodrow Wilson School of Public and International Affairs and the University Center for Human Values, gave students their first assignment. He sent them a letter and a book to read — "The Honor Code: How Moral Revolutions Happen" by Kwame Anthony Appiah, the Laurance S. Rockefeller University Professor of Philosophy and the University Center for Human Values — as part of an introduction to the intellectual life of the University.

Eisgruber dubbed the assignment "the Princeton Pre-read," a brand new tradition to complement another established in 2004 —the "pre-rade," in which the new class of freshmen exit the Opening Exercises ceremony and march together, entering Princeton through FitzRandolph Gate, greeted by upperclassmen and alumni. 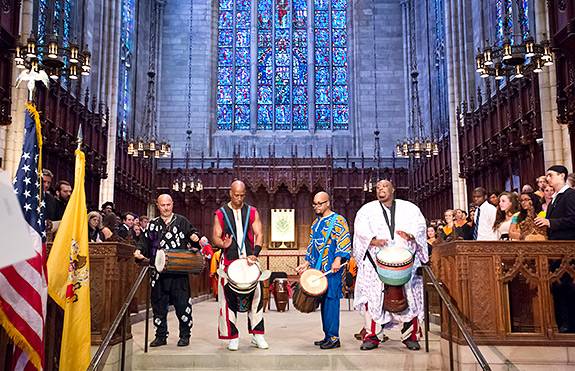 With more than a hint of humor, Eisgruber, a member of the Class of 1983, said in his welcoming remarks that while he remembers many details of his own orientation week 34 years ago, he remembers nothing about what then-President William G. Bowen told the new class — a fact he recalled with some relief as he sat down to pen his first ceremonial address as president. "I found it rather liberating," he said, followed by ripples of laughter from the students.

"What you won't remember will not help you, but it cannot harm you, either," he said, which induced even more hearty laughter from the audience.

What he hoped the students would remember, however, is the question that motivates Appiah's book: "the question of what it means to live a successful human life," he said. "Professor Appiah believes, as do I, that living well has at least two parts to it: living a life that makes you happy, and living a life that is of service to others. 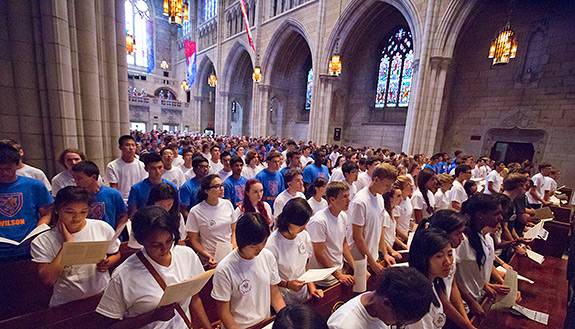 Students from Butler College, along with their classmates who filled the pews and balcony of the chapel, read from the printed program. (Photo by Denise Applewhite, Office of Communications)

"One of the reasons that Princeton's students and alumni so treasure their time on this campus is that they feel a connection to a larger purpose while they are here," Eisgruber said. "Indeed, one of the great gifts of college life, and one of the defining insights of liberal arts education, is that you can and must prepare for important things to come without knowing exactly what they are."

Acknowledging that the future of each freshman student is "for now unwritten," Eisgruber pressed the students to consider Appiah's specific concern with honor.

Quoting from Appiah's book, Eisgruber stated that honor "can help to sustain us in our pursuit of our own good. … [I]t is … an engine, fueled by the dialogue between our self-conceptions and the regard of others, that can drive us to take seriously our responsibilities in a world we share." 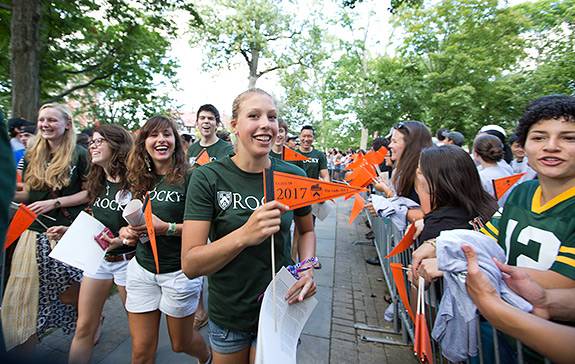 Residents of Rockefeller College smile as they participate in the "pre-rade" after the ceremony. (Photo by Denise Applewhite, Office of Communications)

He said a pertinent example is Princeton's own Honor Code, established in 1893, which requires students to take full responsibility for honesty during in-class examinations.

The sword fights that German fraternities once used to initiate new members were known as academic duels — and the resulting scars "badges of honor." Eisgruber pointed to today's hazing weapon of choice: alcohol.

"The behavior is equally driven by a desperate desire for social esteem, equally self-destructive, and, if anything more lethal — unfortunately, studies indicate that at least one American college student dies in college hazing rituals in the United States each year," he said. 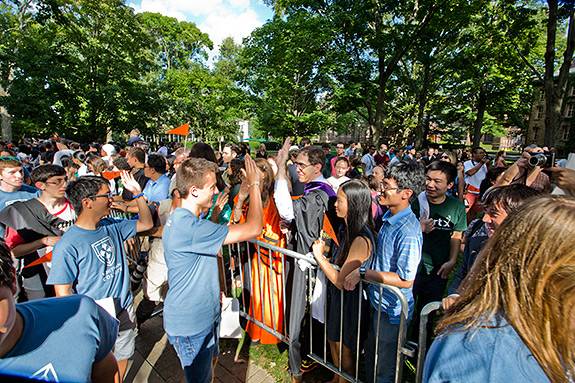 A student high-fives President Eisgruber during the "pre-rade" welcoming members of the Class of 2017 to campus. (Photo by Denise Applewhite, Office of Communications)

Honor can ennoble or degrade, Eisgruber told the students, and depends on the values and practices of a community — what Appiah describes as one's "honor world."

"When you arrived on this campus a few days ago, you became part of Princeton's honor world, a community devoted to learning, to integrity, to being 'in the nation's service and in the service of all nations,'" Eisgruber said.

He pressed the students to take advantage of this community of people who share similar ideals — but sometimes disagree.

"Learn from them. Question them. Question yourself. Rarely if ever again will you find yourself in contact with so many thoughtful people who can help you reflect upon your life project — what, in days gone by, people might have referred to as your calling," he said.

He encouraged them to embrace a multitude of opportunities in the coming four years of undergraduate life both in and out of the classroom, on the playing fields and in the arts, all while immersing themselves in the camaraderie of fellow students that characterizes the Princeton experience. 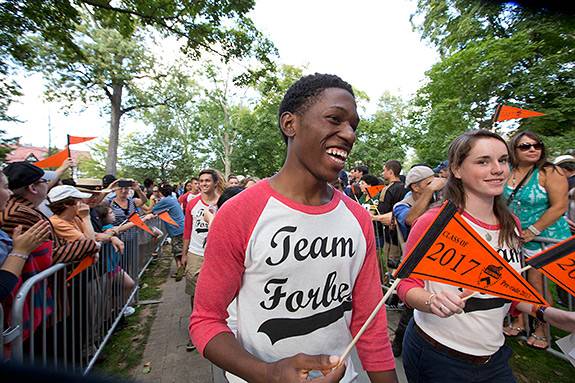 The newest members of Forbes College march along the "pre-rade" route, through FitzRandolph Gate and onto the front lawn of Nassau Hall, as other Princetonians cheer them on. (Photo by Denise Applewhite, Office of Communications)

He closed his remarks with another University tradition: bestowing upon the incoming class the affectionate moniker "Princeton's great Class of 2017."

"Welcome to Princeton!" Eisgruber exclaimed amid cheers that reverberated throughout the chapel.

Following the ceremony, the chapel doors opened as the students, wide grins across their faces, streamed out into a clear-skied bright afternoon dabbed with the first subtle scent of turning leaves, to begin officially  their undergraduate experience. 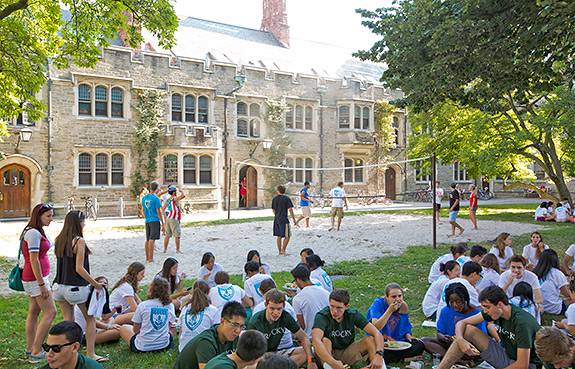 Following the "pre-rade," students enjoy a barbecue and socializing with new friends. (Photo by Denise Applewhite, Office of Communications)