In an address in Richardson Auditorium at Princeton University on Sept. 26, Mohamed Moncef Marzouki, president of the Republic of Tunisia, laid out the challenges that face an Arab nation as it struggles with a nascent democracy. 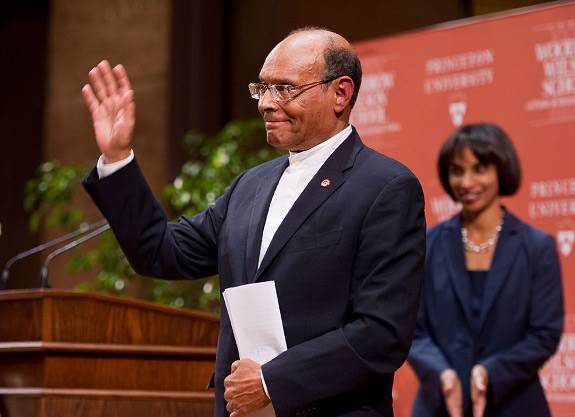 Mohamed Moncef Marzouki, president of the Republic of Tunisia, greets the crowd at Princeton University's Richardson Auditorium on Thursday, Sept. 26, as Cecilia Rouse, dean of the Woodrow Wilson School of Public and International Affairs, applauds with the audience. (Photo by Sameer A. Khan, for the Woodrow Wilson School for Public and International Affairs)

Marzouki's address, co-sponsored by the Woodrow Wilson School of Public and International Affairs, the Mamdouha S. Bobst Center for Peace and Justice, and the Workshop on Arab Political Development, came during a trip to the United Nations General Assembly meetings.

He said he was "surprised and moved" by the invitation to come to Princeton. When he told his youngest daughter Nadia — who was a visiting graduate student in the Department of Politics in 2005-06 — that he was going to give a speech here, she told him: "Daddy, be very careful. Speak loudly. Don't be aggressive with the students." He assured the audience, who laughed warmly, that he promised to follow her advice.

Disconcerted by "the numerous rumors and misconceptions spread about the Arab Spring," Marzouki said he wanted to clarify what is taking place in Tunisia and other Arab nations. "I thought there was a kind of shift in the discourse of international observers from romantic enthusiasm to dark disappointment and gloomy predictions about the so-called failure of the Arab Spring," he said.

Marzouki said the turmoil that Arab countries now face is not an effect of Islam but rather the challenges of democracy itself, pointing out that centuries ago, Plato had said that democracy brings chaos. 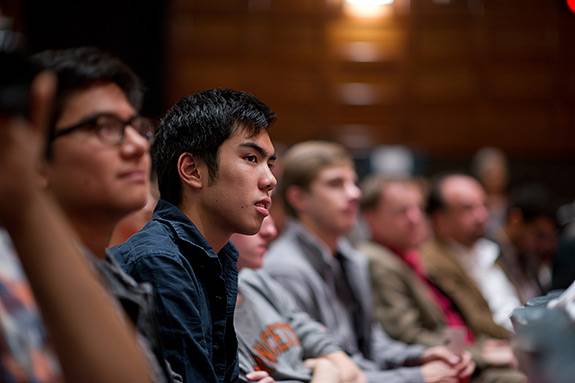 Freshman Kevin Wong listens intently to Marzouki's address, which was followed by a question-and-answer session. (Photo by Sameer A. Khan, for the Woodrow Wilson School for Public and International Affairs)

Introducing Marzouki, Cecilia Rouse, dean of the Woodrow Wilson School, reminded the audience of students, faculty and community members that the Arab Spring was born in Tunisia in December 2010 when authorities confiscated the cart of vegetable salesman Tarek al-Tayeb Mohamed Bouazizi and he set himself on fire, killing himself.

After years in exile because of his activities in trying to oust Ben Ali, Marzouki returned to Tunisia in January 2011, Rouse said. Within months, he was elected to the Constituent Assembly, who elected him president of Tunisia on Dec. 12, 2011.

"What led Dr. Marzouki to the presidency? A life dedicated to human rights, many nights spent in prison and a fundamental desire for political change," Rouse said.

Marzouki said that countries such as Tunisia newly "conquered by democracy are trying to cope with this new political regime, and it's not easy. ... We are facing a lot of challenges. It requires time." He pointed out that even after the American Revolution, "not everyone enjoyed the immediate effects of independence."

He expressed his continued hope for democracy's success in the Arab region, including Egypt. "The experimentation of democracy in Egypt is probably a catastrophe for democracy but I hope this will not be the end of it, that once again the experiment will be resumed and that it will succeed," he said.

Marzouki told the audience that he had spoken earlier in the day at the United Nations about his project to establish an International Constitutional Court. During the Q&A session that followed his address, a student asked for more details about the court.

Marzouki said the idea came to him when he was in exile. "It was extremely frustrating for me to hear the dictator talking every day about democracy; it was mere hypocrisy. We didn't have any way to complain about these kind of elections," he said.

According to Marzouki, the court would have the power to invalidate an election if necessary and to determine whether a nation's constitution violates the freedom and rights set forth by the Universal Declaration of Human Rights. "If it does, it can be declared illegal and cannot be recognized by the United Nations," Marzouki said.

The proposal has gained the attention of legal experts in several countries, Marzouki said. "It is not a coincidence that this idea was born in an Arab country. Arab countries know all too well what dictatorship is and why it's urgent to fight it by all ways." 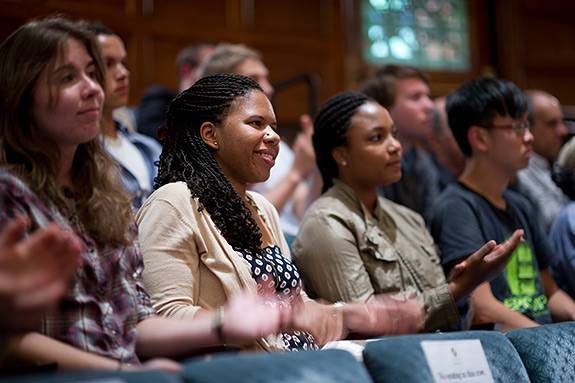 Seniors Kandasi Griffiths (second from left), who is majoring in politics, and Christian Brown (third from left), who is concentrating in Near Eastern studies, appreciated the chance to hear Marzouki's portrayal of democratization in the Arab world. (Photo by Sameer A. Khan, for the Woodrow Wilson School for Public and International Affairs)

Freshman Kevin Wong of Toronto said he "found it reassuring how President Marzouki stressed the importance of opposition and tolerance; indeed, his thoughts on Egypt indicate that he knows well the dangers of an uncompromising government," Wong said.

Senior Christian Brown of Atlanta called Marzouki's appearance at Princeton "a once-in-a-lifetime opportunity to hear a unique perspective on current events in the Middle East.

"As a Near Eastern studies major, I found it refreshing to hear President Marzouki champion the extent to which struggle is inherent to democracy, not Islam or the Middle East," Brown said. "It was awesome to hear the Tunisian head of state express hope and optimism for the democratic future of his country while also recognizing the specific challenges and advantages of the Tunisian context."

Senior Kandasi Griffiths of Atlanta, who is concentrating in politics, said she has taken several courses — such as "Politics of the Middle East" taught by Amaney Jamal, an associate professor of politics and the director of the Bobst Center for Peace and Justice — that touched on the topics Marzouki discussed. "He provided a straightforward portrayal of democratization in the Arab world, acknowledging both the successes and ongoing difficulties in Tunisia," she said.

Griffiths added that she has been keeping track of General Assembly speeches over the past week and plans to write her senior thesis about the United Nations. "It's very exciting to hear a foreign leader speak at Princeton — it's like a little piece of the UN on campus."