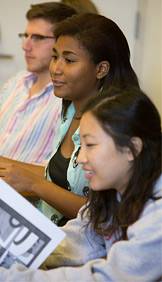 In the freshman seminar "Extraordinary Popular Delusions and the Wisdom of Crowds," students are exploring how myths throughout history — from fairy tales to urban legends — both identify and deflect the concerns and fears of society. The seminar is being taught by novelist Susanna Moore, a lecturer in creative writing and the Lewis Center for the Arts. Above: Michael Perel (top), Kendall Bedford and Helen Gao join the discussion about Robert Louis Stevenson's macabre tale "The Strange Case of Dr. Jekyll and Mr. Hyde."

This is part of a series of features highlighting freshman seminars offerered at Princeton this semester. Other features:

Students examine the "vivid force" of myths in conversations that stem from readings including 19th-century novels of horror, modern fiction, short stories and film.

In their first semester on the Princeton University campus, 15 freshmen are delving into stories — from witchcraft and horror to alien abductions and urban legends — to explore how myths through history both identify and deflect the concerns and fears of society.

The freshmen are examining such topics in the freshman seminar "Extraordinary Popular Delusions and the Wisdom of Crowds," taught by novelist Susanna Moore, a lecturer in creative writing and the Lewis Center for the Arts. 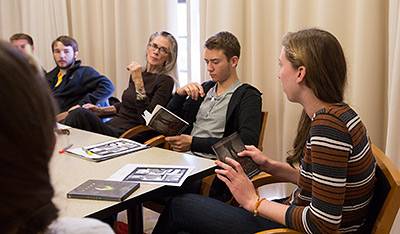 Freshman seminars are limited to 15 students, allowing participants to build strong relationships with faculty members and classmates in a close-knit intellectual yet informal setting. This is the third year Susanna Moore (middle) has taught the seminar.

This is the third year Moore has taught the seminar. "I chose this topic because I suspected that the students would take delight in, and be excited by, the symbolism that often underlies myths, fairy tales, and even certain superstitions," she said. "My hope is that the students will begin to look at stories in a way that is not literal or prosaic, but fanciful and imaginative."

The title of the seminar rephrases that of Scottish writer Charles Mackay's 1841 work "Extraordinary Popular Delusions and the Madness of Crowds," about the susceptibility of the masses to large-scale schemes and deceptions, from witch burnings to the prophecies of Nostradamus. Moore said she changed the word "madness" to "wisdom" in Mackay's title "because myths and superstitions can (sometimes, not always) reflect the wisdom of crowds as much as they reflect the ignorance or paranoia or fantasy of crowds." 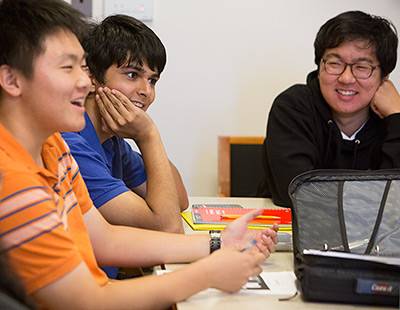 Blair Wang (left), Aneesh Rai and Nathan Park debate the roots of Dr. Jekyll's obsessive fascination with evil — with ideas that range from hideous to humorous.

The syllabus includes a variety of literature, from Grimm's fairy tales and "Dracula" to works by contemporary writers such as Ray Bradbury, Don DeLillo and Shirley Jackson. Films also are on view, including "Dr. Strangelove," "Contagion" and "Alien." These tales — invariably terrifying, sometimes humorous — capture the vivid force that makes myths so effective in both conveying rational warnings and appeasing anxiety, according to Moore.

On a recent fall afternoon, the class engaged in a lively discussion about Robert Louis Stevenson's "The Strange Case of Dr. Jekyll and Mr. Hyde," the macabre tale published in 1886 about a character's split-personality struggle between good and evil.

Moore helped set the tone of informality as a bag of peanut butter cups made its way around the small classroom in Wilson College and the occasional rustle of wrappers punctuated the conversation.

"Free association can be very useful in interpreting the fears and warnings in these stories and myths," she told the students.

Continuing a previous discussion, Moore asked for a volunteer to define the Freudian id, ego and superego. Blair Wang jumped in. "The id is our primal desires; the superego is our value side, what we think we should do, what is morally superior; and the ego tries to balance the superego and the id to deal with real-life situations," he said.

Moore posed a question: "If Dr. Jekyll's superego has led him to create the monster Mr. Hyde, who is all id, what can Dr. Jekyll possibly have done that causes him to feel such guilt, at the same time that he battles his obsessive fascination with evil?"

The students lobbed ideas back and forth. Was Jekyll engaged in prostitution or drugs or another vice of Victorian England? Was he repressed by society's mores? 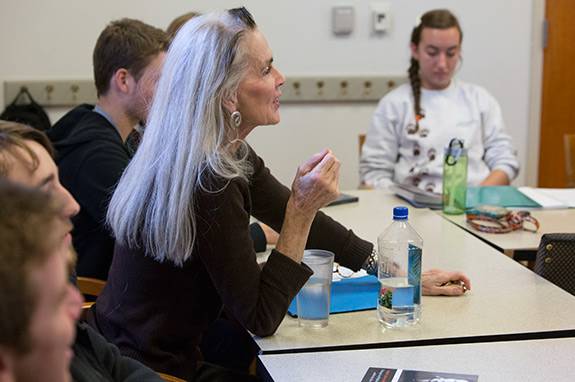 Moore, whose novels have earned her numerous awards including the Prize for First Fiction from the American Academy of Arts and Letters, shares stories from her childhood in Hawaii to encourage students to relate the subject matter of the seminar to their own lives. She tells the students: "Free association can be very useful in interpreting the fears and warnings in these stories and myths."

Moore, a native of Hawaii, started teaching at Princeton in 2007. Her earliest three novels make up a Hawaiian trilogy — the first book, "My Old Sweetheart" (1982) won the PEN Hemingway Citation and the Prize for First Fiction from the American Academy of Arts and Letters. In 1999, the academy recognized her with an Arts and Letters Award. Her novel "In the Cut" (1995) is about a murder in New York and was made into a feature film in 2003. Her memoir "Light Years: A Girlhood in Hawai'i" was published in 2003. Moore's novel "The Big Girls" (2008) takes place in a women's prison. "The Life of Objects, " published this year, explores the horror a German family faces during World War II.  "Telling stories is what I do — the work of a novelist is as simple as that," Moore said.

When a student suggested the possibility that Dr. Jekyll didn't do anything wrong but rather just thought about it, Moore shared a childhood story. "I was brought up a Catholic, and I was taught that the very wish to commit a sin was itself a sin. I remember thinking as a girl, 'Well, I've already committed a sin just by thinking about it — I might as well do it.' A very convenient way to justify bad behavior." The students laughed, enjoying her candor.

Mimran, who came to Princeton from Geneva, added: "As a first-year international student, I had not expected to have the privilege of finding myself in such a small, diversified and talented class that would enable such discussion."

David McFall, like Mimran, is enjoying the diversity of opinions. He observed that several students had read "Dr. Jekyll" before but had not considered the deeper aspects of the book. "I heard interpretations that I have never imagined or considered," said McFall. "Each topic we cover is both eye-opening and refreshing."

Students share some of these "eye-opening" topics in individual presentations each week. On this afternoon, three students spoke about live burial, vices in Victorian England and Jung's collective unconscious. Afterward, Moore turned to another student to confirm his topic for the next class: zombies.

The students then filed out for a break. One student, Lorena Grundy, and Moore stayed to share some of their thoughts about the seminar.

"Many of the students are studying mathematics or engineering or earth sciences or architecture — disciplines that rely on facts," Moore said. "I suspect that it comes as a relief to some of them to think fancifully and without proofs. It can't be proved that Jung is right about a collective unconscious, or that 'Snow White' is a parable of a girl preparing for womanhood, or that the urban myth of 'The Chihuahua in the Microwave' reflects our fear of new technology. Which means that speculation, the exercise of fantasy and even an intellectual playfulness are necessarily part of our discussions."

Grundy plans to major in chemical and biological engineering. "I chose Princeton because I wanted a well-rounded education, not just an engineering degree," she said. "I can't disagree about the way to solve a matrix or how a molecule resonates. It's cool to have a class where it is what you make of it as opposed to 'do you know this?' We're really good about not being afraid to disagree."

"And they're not afraid to disagree with me, which is really good," Moore said. "From the first day, they were very high-spirited, very opinionated, very animated."

As the students returned, the classroom turned into an impromptu movie theater screening the second half of "Alien," which they had started the previous week.

"The character of the alien isn't all that different from the monster Mr. Hyde created by Dr. Jekyll, is it?" Moore observed.

Finding the holy in everyday life through literature