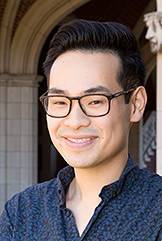 Princeton University senior Dixon Li has been named a 2014 Marshall Scholar. The Marshall Scholarship covers the cost of graduate study and living at a British university of the recipient's choice for up to two years. Up to 40 scholars from American colleges are named annually.

Li, an English major from Sandy, Utah, plans to complete two master's degrees. He will study writing in the modern age at Queen Mary University of London and for his second year, pursue an M.Phil. in English at the University of Cambridge.

In his application for the scholarship, Li, who is also earning certificates in American studies and African American studies at Princeton, wrote that he would like to deepen his knowledge of modernist culture "while developing theoretical frameworks for studying contemporary culture."

Li said he is "excited about the kinds of intellectual and artistic opportunities available in England," and he is particularly eager to "live and study in London where there is a vibrant and very diverse art scene."

In his application Li explained how as a child of Chinese immigrants, he initially wanted to major in politics and "study how individuals emerged or fell out of view in social landscapes."

That changed, he said, when as a sophomore he took a graduate seminar in English and saw how he might "combine my commitment to social issues with my love of literature."

Professor of English Anne Cheng was the teacher of that seminar, "Modernism and Ornament." At first concerned about allowing a sophomore into the course, Cheng said she "immediately realized this was no ordinary student" and that Li "more than held his own" with comments in class that were "smart, adventurous and consistently valuable in promoting discussion."

Since then, Li has taken Cheng's class "Shades of Passing" and in spring 2013 he embarked on an independent reading course supervised by Cheng. In his final year at Princeton, he is writing a senior thesis under Cheng's guidance on the topic of race and the senses.

"Dixon reads voraciously and is intellectually curious about art, writing, philosophy, music and visual culture," Cheng said. "He is willing to think through a text with patience and keen intelligence. He thinks outside the box, is constantly thinking, and always attentive to material and ineffable dynamics that surround him."

On campus, Li has been involved in a range of activities. He was the layout editor of the Nassau Literary Review; has given public tours of the art museum, where he was formerly the Joseph McCrindle Intern to the Modern and Contemporary Galleries; and worked with the student-run radio station WPRB.

He serves as a peer academic adviser to freshmen and sophomores, a fellow at the University Writing Center, and a peer educator at the Lesbian, Gay, Bisexual, Transgender (LGBT) Center. He also has helped coordinate Community Action groups during freshman orientation to Philadelphia and Trenton, N.J., to address topics such as criminal justice and the arts.

Li also has taken opportunities to travel while at Princeton. He participated in a PIIRS Global Seminar in Rome the summer of 2011 and returned as a teaching assistant the summer of 2013. As a rising junior, Li received a Martin A. Dale Summer Award and went to Guanxi, China, to work on a summer project.

After his Marshall Scholarship, Li plans to pursue a Ph.D. in English and an academic career.