It's unlikely that anyone would have suggested that Emily Carter, Princeton University's Gerhard R. Andlinger Professor in Energy and the Environment, had no future in science.

Carter, who delivered the keynote address March 29 at Princeton's Women in STEM symposium, described how as a young girl with an aptitude for math and science she was discouraged from pursuing either. Science was not for girls, she was told, especially if a young lady wished to be considered attractive. Carter continued to endure such deterrence as a university student and young professor. In becoming a scientist, she persevered thanks to her personal resolve and the encouragement of her friends, mentors and family, particularly her mother. 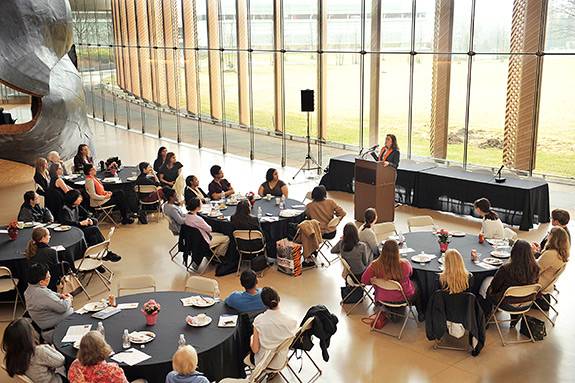 Women from across Princeton University's science and engineering departments gathered to discuss — and find solutions to — the challenges that female scientists face during the March 29 Women in STEM symposium in Princeton's Icahn Laboratory Atrium. The event included a keynote address by Emily Carter, Princeton's Gerhard R. Andlinger Professor in Energy and the Environment, as well as a panel discussion with women in various stages of their scientific careers, from undergraduate students to administrators. (Photos by Mark Czajkowski for the Office of Communications)

The prejudice and resistance she experienced are common for women aspiring to careers in the STEM fields, or science, technology, mathematics and engineering. Unfortunately, many women abandon the sciences in the face of such obstacles long before they can realize their potential as Carter did, she said. 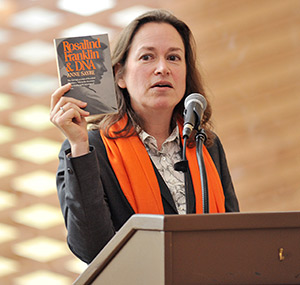 Princeton professor Emily Carter, who delivered the symposium's keynote address, described how as a young girl with an aptitude for math and science she was discouraged from pursuing either. Carter, who also is director of the Andlinger Center for Energy and the Environment, imparted lessons for women pursuing careers in science that were based on challenges faced by her and other women scientists such as Rosalind Franklin (subject of book). Franklin's essential work on the structure of DNA was used without her knowledge as a basis for Francis Crick and James Watson's — both men — discovery of the double helix in 1953. Franklin's contribution was subsequently overlooked for decades.

"Discouraged and disenchanted, many women choose to leave the STEM fields," Carter told the audience gathered in the Icahn Laboratory Atrium. "It's such a waste of 51 percent of the talent pool to not have the contributions of all those women who don't go into science, or who started to go in and got discouraged."

Carter, who also is director of the Andlinger Center for Energy and the Environment, imparted stories of the discouragement and hostility she faced as a woman in science, as well as the lessons she learned from her ordeals. Her tales ranged from throughout her life and career, and with each she examined how each transgression — from condescending remarks to outright aggression — could possibly derail a woman's aspirations. For example, shortly after she had been hired as an assistant professor at the University of California-Los Angeles in 1988, a professor came up to her at a conference and asserted that she'd only attained the position because she was a woman. "How dare he say that," Carter said. "That can be really devastating to the person who hears it. Luckily, I was confident, but what if I hadn't been?"

Stories such as this segued into practical advice, the foremost being for women to remove themselves from negative and unwelcoming circumstances. Young women should learn to recognize good mentors, who can be very important to overcoming a hostile environment. And they don't have to be women, said Carter, adding that all of her mentors were men. "Mentors don't have to look like you — they just have to want to help you," she said. 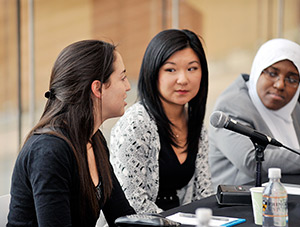 During the panel discussion, Lauren Edelman (left), a senior in chemical and biological engineering and co-president of the Society of Women Engineers, discussed the outreach her organization conducts to engage and retain young women in science and engineering. Laura Xu (center), a junior in electrical engineering, is a co-chair of the society's high school colloquium. Chaevia Clendinen (right), a graduate student in molecular biology and president of Princeton's Graduate Women in Science and Engineering, said that overcoming the discouragement women can face in the sciences is challenging but rewarding.

Yet women should also be confident in their abilities, she said. "I feel that women tend to be very introspective and self-critical," she said. "That can be a force for good, but it also can be bad in laying seeds to doubt yourself. It's good to be self-critical; it can motivate you to do better work. Just don't overdo it."

Carter encouraged women to speak up against differential treatment of women. For instance, Carter boycotts professional conferences that do not include women speakers. She helped organize a petition against the 15th International Congress of Quantum Chemistry in February when conference organizers posted a partial list of more than two dozen speakers that was all male. Carter also declines to be considered for awards specific to women, she said: "We are absolutely, intrinsically equal to men and qualified for the same awards."

"My goal is that before I retire I want science, engineering and mathematics to look more like the makeup of the general population, but for that to happen we have to change the culture," Carter said. "STEM has so much to contribute to the world and should be welcoming for everyone who wants to be a part of it." 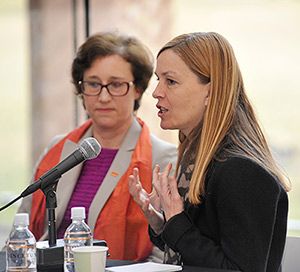 Panelist Alison Gammie (right), a senior lecturer in molecular biology, said that a woman can successfully balance her family and career. Gammie manages her day so that she has a "super-efficient eight hours" of work and can focus on her family at home. Associate Dean for Research Karla Ewalt (left) said that supportive mentors and networks are critical for encouragement and finding new opportunities.

The keynote address preceded a panel discussion featuring seven women from different stages in the science-career spectrum, including undergraduate and graduate students, postdoctoral researchers, lecturers and deans. The overall message was that challenges facing women in sciences, mathematics and engineering — be it discouragement, or balancing the obligations of work and family — can be overcome with confidence, support and tenacity.

"I think what most women struggle with is a feeling of being inadequate. Not because we are inadequate, but because we're made to feel that way," said Chaevia Clendinen, a graduate student in molecular biology and president of Princeton's Graduate Women in Science and Engineering. "Yes, there is a struggle, but if you want it, you can pursue it and be successful at it."

Associate Dean for Research Karla Ewalt said that supportive mentors and networks are critical for encouragement and finding new opportunities. Sometimes women will have to make seemingly risky career decisions to see through their goals and be in the environments they seek. "Job opportunities are not like a menu at a restaurant," she said. "They're not presented as a lot of choices at once. They come along one at a time." 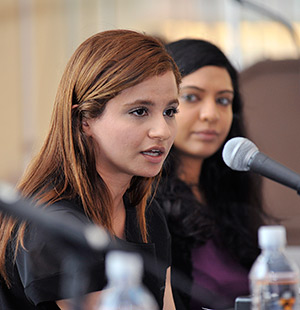 A particular issue facing women in the time-demanding STEM fields is the decision to have children. Alison Gammie, a senior lecturer in molecular biology, said that a woman can successfully balance her family and career. Gammie manages her day — such as by preparing her tasks a day in advance and avoiding distractions — so that she has a "super-efficient eight hours" of work and can focus on her family at home. Women only need to remind themselves that when it comes to family and career, one area doesn't necessarily suffer because of the other one, Gammie said.

"Please get rid of the guilt. Your kids will be fabulous and you can do your job and still be engaged with them," Gammie said. "For those of you with a passion for staying in academia, it's a great life. It's hard, but it's really a great life."

Attendee Sonya Legg, a research oceanographer and faculty member in the Program for Atmospheric and Oceanic Sciences, found the symposium encouraging because it brought together women with similar experiences and goals who are otherwise scattered throughout the University's many STEM departments. Legg is the program's only female faculty member, although about half of the program's graduate students are women, she said. 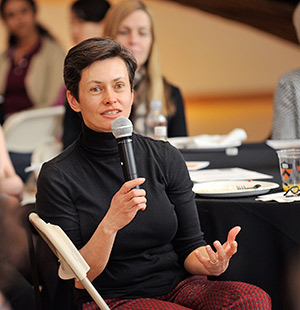 Sonya Legg, as the only woman on the faculty in the Program for Atmospheric and Oceanic Sciences, found the symposium useful for bringing together a group of women scientists typically scattered across various departments and offices. One of the biggest challenges for women in science is feeling isolated, she said.

"Because I'm the only woman on my faculty, I often feel like I'm trying to do things by myself. It was nice to come here where we talked about our ideas on a broader level," Legg said. "A lot of the problem for women in STEM is one of isolation. Because there can be so few of us in a department, we can't do much individually. Together, we can put our heads together and have more of a community."