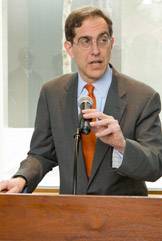 An opening celebration for the new Princeton Station Tuesday, Nov. 25, featured a ceremonial ribbon-cutting and remarks from University, town and state officials. Above, Princeton President Christopher L. Eisgruber comments on the University community's reliance on the train station for connecting to the world beyond campus. 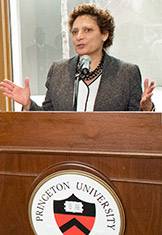 Ronnie Hakim, executive director of NJ TRANSIT, praises her University and town partners for a "true partnership" and collaboration in opening the station. 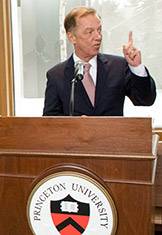 Jamie Fox, commissioner of the New Jersey Department of Transportation and chair of the NJ TRANSIT board, describes the station as a "great addition" to the University and state.

With a ceremonial ribbon-cutting, speeches and the whoosh of the Dinky train's departure, officials celebrated the opening of the new Princeton Station on Tuesday, Nov. 25.

Representatives from Princeton University, the town of Princeton, the state and the project's design and construction firms were on hand for the celebration, commenting on the importance of the station and transit services to the University and town.

"I'm very pleased that we have reached this milestone in our Arts and Transit Project, the building of this gorgeous new Princeton station," Princeton President Christopher L. Eisgruber said.

The train service, he said, "is important to the University as well as to the town. For members of our campus community, the station is an important link to the Princeton Junction Station and from there the rest of the country and on to the world. I hope you will join us in looking forward to the completion of a project that will animate this neighborhood with a glorious combination of artistic and communal spaces."

The station is part of the University's Arts and Transit Project, which involves redeveloping the Alexander Street-University Place intersection by shifting transit services south, opening a restaurant and café and constructing new arts buildings near McCarter Theatre Center by fall 2017. The station, which began operation on Nov. 17, provides service between Princeton and Princeton Junction on a two-car NJ TRANSIT train known as the Dinky. The new Wawa and a transit plaza also are open. 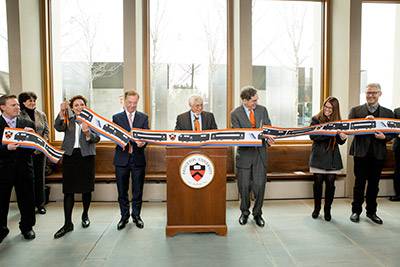 Representatives from Princeton University, the Town of Princeton, the state and the station's design and construction firms cut a ribbon featuring an illustration of the two-car Dinky train.

Jamie Fox, commissioner of the New Jersey Department of Transportation and chair of the NJ TRANSIT board, said: "This is a beautiful facility. It's a great addition to the University and to the state of New Jersey."

Ronnie Hakim, executive director of NJ TRANSIT, commended the smooth partnership between the town, University and state to serve the 850 NJ TRANSIT customers who use the station each day. "It is a true partnership when … a University [and] a town comes together with a public partner, and this is the outcome," she said. "We are celebrating this beautiful station, the beautiful convenience store, the sustainability of the design and the thoughtful construction that led to getting this building open."

Princeton Mayor Liz Lempert commented on the Dinky's long history, from references in literature and film to its value to past riders such as Albert Einstein and present-day commuters. Said Lempert: "We love our Dinky, we're passionate about our Dinky, and we believe in the importance of public transit and the vital connection it provides for all Princetonians. We stand here today eager to work in partnership with the University, with NJ TRANSIT and the state to ensure that this new chapter for the Dinky is going to be its most successful one yet."

Students and officials discuss the new Princeton Station and the NJ TRANSIT Dinky train, which provides service to Princeton Junction and beyond. (Video by Danielle Alio and Amaris Hardy, Office of Communications)

University Vice President and Secretary Robert Durkee, who emceed the event, praised the station's design, saying it "produced a civic space that is truly inspiring and beautiful and comfortable and functional, and that announces clearly and compellingly to passengers and passersby that Princeton not only has a train station but is proud of its train station and its train." He added that one of the most exciting aspects of the project is that it serves "as a crossroads where town and gown intersect and share common space."

Durkee sounded a train whistle, signaling to Eisgruber, Fox, Hakim and Lempert to cut the ribbon with gold-handled scissors festooned with small ribbons in Princeton's colors, orange and black. Before and after the ceremony, more than 100 people attending the ceremony mingled in and around the station and enjoyed refreshments served in a tent on the plaza. All the while, students rolled their luggage onto the train platform as they prepared to board for travels on Thanksgiving recess. 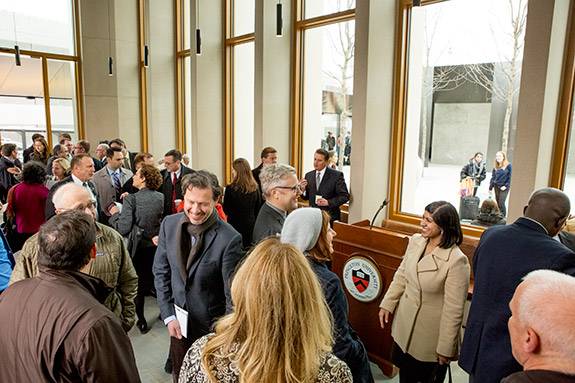 Students (right) waiting for the Dinky look through the Princeton Station windows as attendees chat after the celebration.

Princeton Station and the Wawa were designed by Rick Joy Architects, based in Tucson, Arizona, and several common elements tie the structures together. A courtyard with honey locust trees and a canopy along the platform connect the buildings.

The station's pitched roof, rising to 42 feet, addresses earlier public concerns that the building would be hard to find. "It's tilted up as if waving to people along Blair Walk, coming from Nassau Street," said Matt Luck, an architect with Rick Joy Architects.

Among the station's most distinct elements are the Nakashima Woodworker benches, created by the New Hope, Pennsylvania, studio of the late master craftsman George Nakashima, renowned as a furniture designer and maker in the mid-20th century. The studio, run by his daughter and apprentice, Mira, is known for simple, elegant pieces that combine quality craftsmanship and materials, highlighting the unique characteristics of the wood. Luck said the black walnut benches — each unique, with wood Nakashima selected — bring local artistry and warmth to the station, and a contrast to the concrete, steel and bluestone inside.

"We always wanted there to be a warm, inviting element to the station, something on a human scale and something tactile and approachable," Luck said. 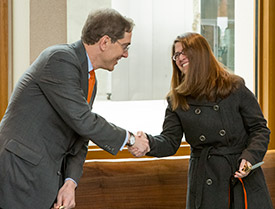 The new transit plaza accommodates a number of transit options and services.