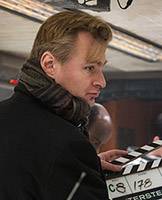 Film director, screenwriter and producer Christopher Nolan has been selected to deliver the keynote address at the University's Class Day ceremony on Monday, June 1, 2015.

"Nolan, more than a film producer, is a thinker and visionary in our age and we are thrilled to have him deliver the keynote address," said Class Day co-chair Hanna Kim. "I admire Christopher Nolan's tireless commitment to making movies that are entertaining and innovative, but most importantly, meaningful."

Kim added, "Through his movies 'Memento,' 'The Dark Knight' trilogy, 'Inception' and most recently 'Interstellar,' Nolan has challenged us to ask 'big' questions about important societal topics such as identity and morality."

"Since then, Nolan has been a pioneer in every sense of the word. From his unconventional story lines to his innovative filmmaking, Nolan has left an indelible mark on American culture and film. While his films have entertained us and captivated us for the past 20 years, they have, more importantly, made us think," Cole said.

"As we prepare to leave Princeton and embark on our own missions to make an impact on the world, Nolan could not bring a more important message: to chase our passions, strive to both challenge and preserve tradition, and most importantly, never let our ambition wane," said Class Day co-chair Adam Tcharni.

Tcharni added that Nolan's films have explored important philosophical and sociological concepts, such as human morality and class conflict, and he has "never sacrificed the social and cultural mission of his work for commercial success."