Purcell Carson (right), the instructor of the class "Documentary Film and the City," helps Princeton University student Sharon Deng set up a camera during an interview at the YMCA of Trenton. Students are creating short doumentaries to tell stories of Trenton, New Jersey, its people and the ways they make a living.

Kenya's story starts on a bus as she rides to her job at a recently opened Amazon distribution warehouse.

Juan's story starts at a small store on State Street, a permanent home for a business he started by selling dresses and women's shoes from the back of his car.

They are stories of Trenton, New Jersey, its people and the ways they make a living. Princeton undergraduates are telling these stories and others like them this semester through short documentaries as part of the course "Documentary Film and the City." 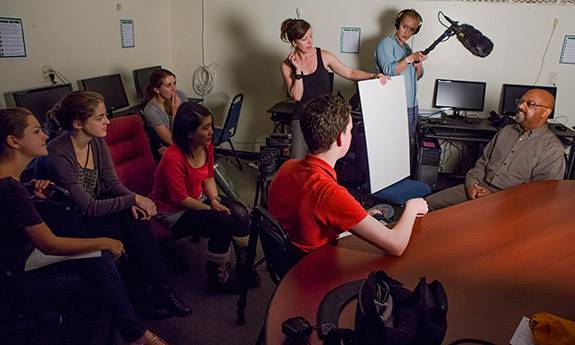 Students interview Calvin Thomas at the YMCA of Trenton. Thomas talked about growing up in Trenton in the 1950s and '60s and the challenges the city has faced in recent decades. (Photo by Denise Applewhite, Office of Communications)

With support from the University's Community-Based Learning Initiative and the Princeton-Mellon Initiative in Architecture, Urbanism and the Humanities, the course combines a focus on urban history and the history of documentary cinema with hands-on explorations of filmmaking. At the end of the course, each of the six students produces a four- to six-minute documentary on an aspect of work in and around Trenton, the state capital. The course is offered through the Department of Sociology and the Program in Urban Studies.

Topics include transportation, the challenges of starting a business, finding role models in the inner city, a woman working her way into the construction business and efforts to ensure immigrant workers in the town of Princeton receive the pay they are owed for work. Most are focused in Trenton, a city of 84,000 people just a dozen miles from the University campus. For decades, Trenton has struggled with a declining economy, urban decay and crime. 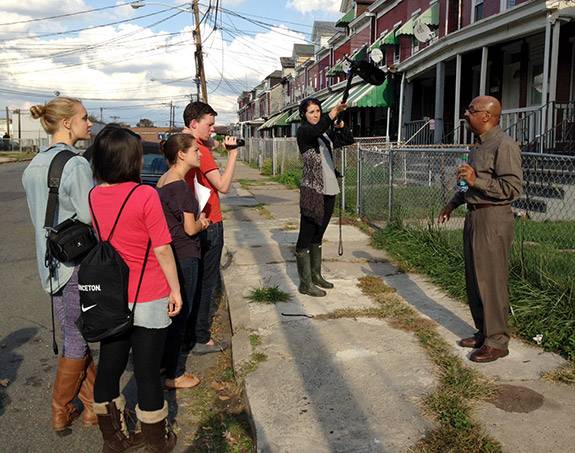 Thomas and the students explore Kelsey Avenue, the street where Thomas lived as a child. (Photo by Michael Hotchkiss, Office of Communications)

Sophomore Elisa Steele has been exploring the Z Line bus service, a free shuttle that connects NJ TRANSIT bus lines with the business park housing an Amazon.com Inc. warehouse in nearby Robbinsville. For many workers such as Kenya, the shuttle represents a much-needed link between Trenton and a job.

"I am focusing my piece on transportation for urban workers," Steele said. "You see through the film that many, many Trentonians don't necessarily have access to a car and are struggling with the issue of access to jobs."

Steele spent time on the shuttle talking with riders and the driver, as well as interviewing a representative of the Greater Mercer Transportation Associates, a nonprofit group that helped create the service.

Steele said she hopes her film will offer inspiration to other Trenton residents who struggle with transportation issues and perhaps show the value of the Z Line — which is supported in part by Amazon — to other employers.

"The fact we could focus an entire course on this city is showing me how much I have to learn about urban studies and cities in general," Steele said. "Every city has its own story, and there are so many smaller stories within the city and the workers' lives." 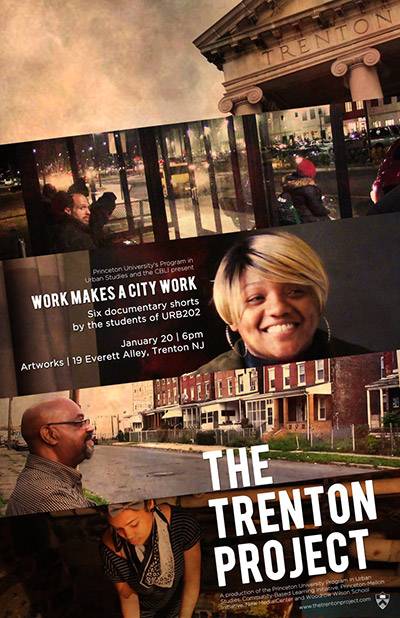 A poster promotes the Jan. 20 screening of the micro-documentaries. (Poster by Shreya Nathan, Class of 2015)

Sharon Deng, a sophomore, is focusing on Juan and his clothing shop as a way to highlight Trenton residents who are starting their own small businesses. The entrepreneurs get assistance from the Intersect Fund, a nonprofit group that provides business training, coaching and microloans to low-income, minority and women-owned businesses throughout New Jersey.

"My project is about people who can't find jobs, so they become entrepreneurs," Deng said. "It's an admirable thing because it helps the city in general to come back."

Deng, who is from China, said the project has opened her eyes to life in Trenton and she hopes people on campus who watch her documentary will come away with a greater appreciation for the efforts and struggles of her subjects.

"I hope to raise awareness on campus about what happens in a community that isn't in the 'orange bubble' [of Princeton] but is so close," Deng said.

To introduce the students to Trenton and give them hands-on experience with the camera equipment, the class took a trip early in the semester to the city, where they interviewed lifelong resident Calvin Thomas. In a conference room at the Trenton YMCA, Thomas talked about growing up in Trenton in the 1950s and '60s and the challenges the city has faced in recent decades.

The students — taking turns operating the camera, monitoring sound equipment and asking questions — then followed Thomas just around the corner to the street where he grew up, Kelsey Avenue. Today, many of the red-brick row houses sit abandoned but Thomas recalled the vibrant community that existed there in his youth. Greeting longtime residents by name, Thomas pointed to the house where he grew up and recalled the stories of his neighbors.

A short walk away, Thomas highlighted a success story for the neighborhood, a shopping center he helped develop that contains a grocery store and other businesses.

Exposing the students to such personal stories is one goal of the course, Carson said.

"I hope that they take away the specificity and complexity of individual experience that they see by going out into the field," Carson said. "I think that's something that will help them even if they spend the rest of their lives operating on a bigger-picture, policy-driven level."

Classroom snapshot: 'The Art of Living'