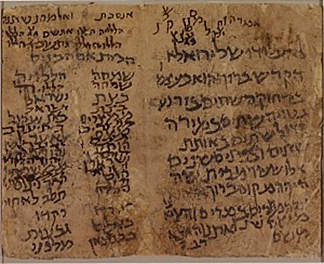 The Geniza fragment above is from the oldest extant Passover Haggadah (ca. 1000 CE), inexpertly written with a spelling error that reflects the influence of oral tradition. Someone also practiced writing the alphabet on the right side. (Photo courtesy of the Jewish Theological Seminary of America)

The Jewish Theological Seminary of America's renowned Geniza Collection will be housed temporarily in the Princeton University Library while JTS, located in New York City, rebuilds its library.

The Geniza Collection represents a substantial portion of some 300,000 items "discovered" in the late 19th century in the Cairo Geniza (a Hebrew word meaning "storeroom") of the Ben Ezra Synagogue in the old city of Cairo (Al-Fusṭāṭ). The Cairo Geniza fragments — which span more than a millennium — were consigned to the storeroom because damaged or worn-out religious texts and unneeded old documents could not be thrown away if they contained the name of God.

At Princeton, the collection will be housed in the Manuscripts Division of the Department of Rare Books and Special Collections, and will be accessible for scholarly purposes until fall 2019, when it will be returned to JTS.

The Geniza Collection contains 40,000 handwritten text leaves and documents, chiefly on paper and fragmentary. Conserved and mounted in 1,024 bound volumes, the individual items are written in Hebrew, Arabic, Aramaic, Judeo-Arabic and Judeo-Persian — the latter two terms respectively refer to Arabic or Persian written in Hebrew script. It comprises the world's second largest such collection, after the Cambridge University Library's Taylor-Schechter Genizah Collection.

Over a century ago, Western scholars began using the Cairo Geniza to study the religious, social, economic and cultural life of Jews in Egypt through documents dating from the eighth and ninth centuries until the 19th century. Found among the religious texts are legal and economic documents that offer insight into the everyday lives of Jews in medieval Egypt and beyond, much like the documentary papyri of Roman, Byzantine and Islamic Egypt, as well as Arabic paper documents of Egyptian Muslims during the Middle Ages.

Princeton scholars have long been interested in Geniza studies. The historian S.D. Goitein began working with Geniza documents in 1948. Since 1985, the Department of Near Eastern Studies has been the home of the Princeton Geniza Lab — a collaborative space devoted to making Cairo Geniza documents accessible to the scholarly world and the general public. It hosts the Princeton Geniza Project, a searchable database of Geniza texts transcribed from the originals.

Since fall 2015, the lab has been headed by Marina Rustow, the Khedouri A. Zilka Professor of Jewish Civilization in the Near East and professor of history. Rustow, who joined Princeton in summer 2015, received a 2015 MacArthur Fellowship for her research on the Geniza texts.

Others who will be using the JTS Geniza Collection include Eve Krakowski, assistant professor of Near Eastern studies and the Program in Judaic Studies, as well as graduate students and postdoctoral fellows.