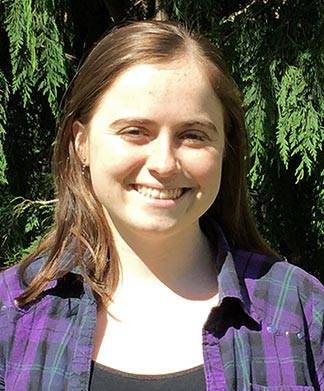 Princeton University senior Sonya Hayden has been awarded a Witherspoon Scholarship to study theater at the University of Edinburgh in Scotland. Established last spring, the scholarship honors the historic ties between Princeton and Edinburgh, highlighting the role of John Witherspoon at both institutions, and is awarded annually to a Princeton senior. Hayden is expected to begin her studies at Edinburgh in September.

A native of Charlottesville, Virginia, Hayden is a music major who is also earning a certificate in theater. She said she will pursue her interest in playwriting at Edinburgh.

"[T]he opportunity to immerse myself in an international theater scene and learn about the similarities and differences between U.K. and U.S. theater is exciting," Hayden wrote in her application. "I … am confident that the structure of the Edinburgh program will allow me to find my artistic voice and discover engaging ways to tell the stories about which I am passionate."

At Princeton, Hayden has immersed herself in theater, with a particular focus on music theater writing. For her senior thesis, she wrote a musical, "The Luckiest Girl," about womanhood in New York City in the Jazz Age. Research funding awards from the Office of the Dean of the College, the Department of Music and the Music Theater Lab allowed her to complete research for the project in London; Galway, Ireland; and New York City.

"It's rare in the musical theater world that someone can effectively write music, book and lyrics, but Sonya did," said Robert Sandberg, a lecturer in English, theater and the Lewis Center for the Arts, who served as Hayden's thesis adviser. "And she did so in a very compressed period of time. Normally, it takes many years for a musical to go from conception to production; Sonya managed this in only nine months. 'The Luckiest Girl' told a moving story, had sociopolitical resonance, was filled with rousing choral numbers and songs that lingered in the audience's mind long beyond the performance."

During her time at Princeton, Hayden also wrote two plays, "What in Creation Was That All About?" — which was produced at the Princeton Student Playwrights Festival in 2013 and was previously published in "Dramafest 2008" by On Stage Press/Samuel French Inc., in conjunction with Stephen Sondheim's Young Playwrights Inc. — and "All the Way Home," which had a staged reading and workshop at Theatre Intime, which Hayden directed.

Sandberg commended Hayden's development as a playwright. "As a writer, Sonya's smart, funny and self-aware in the most positive way. She's clear about what she's trying to accomplish, continually strives to make her work better and eagerly solicits critical responses to her projects. The plays themselves reflect a unique voice. She has a sly, dry understated sense of humor, creates well-defined characters and puts them in quirky, surprising situations," he said.

Hayden was also a writer for the Triangle Club, collaborating with a group of writers on the creation of two musical theater productions annually. She received the Milton Lyon Award for Outstanding Writing for her work with the group. Additionally, she received awards for Outstanding Work in Theater from the theater program in 2013, 2014 and 2015.

Working with Stacy Wolf, a professor of theater in the Lewis Center for the Arts and the head of the Music Theater Lab, Hayden was the co-creator of the course "Introduction to Musical Theater Writing." The course, held in fall 2015, was co-taught by Wolf; Robert Lee, a 1992 alumnus and faculty member in the Tisch School of the Arts Graduate Musical Theatre Writing Program at New York University; and Randall Eng, also with the Tisch program.

Off campus, Hayden gained theater experience by serving as the artistic intern in the producing and literary departments of McCarter Theater Center for the Performing Arts in summer 2014 and as a rehearsal apprentice/production assistant on three McCarter shows. She also served as the literary intern at Manhattan Theatre Club in New York in summer 2015.

Outside of her theater interests, Hayden has served as a head fellow at the Princeton University Writing Center since fall of her junior year, where she worked one-on-one with students to help shape and revise their academic papers; as a peer academic adviser at Whitman College since fall 2015; and an Orange Key tour guide for three years. In spring of her sophomore year she participated in the Princeton-funded residential college exchange program with the Chinese University of Hong Kong.