The 2016 presidential campaign — a roller-coaster ride of surprises and uncertainty — will surely be studied by scholars and students for many years to come.

But the 15 Princeton University undergraduates taking the journalism seminar "Politics and the Media: Covering the 2016 Campaign" are tackling the topic in real time — watching, studying and writing about the campaign and the role of the media. The course is led by veteran journalist Kathleen McCleery, a visiting lecturer in the Council of the Humanities and Ferris Professor of Journalism.

McCleery, a longtime correspondent and producer for "PBS NewsHour" and a member of the Class of 1975, said she designed the course to help students both as writers and citizens.

"If every one of the students can write me a substantial news story — a print story or a television script — covering some aspect of the campaign or media coverage of it, I'll be ecstatic," McCleery said. "But I also want them to be able to look at what's happening with a more critical eye so they can better understand what a media outlet or a candidate has done. That will transfer to many elections."

With those goals in mind, McCleery and the students spend their three-hour Tuesday seminars both looking back at previous campaigns and observing what's happening that week — or even that day — in the 2016 campaign. Assignments come in the form of news stories, which McCleery said are a challenge for students more accustomed to academic writing. For their final project, students are tackling topics including African Americans who aren't voting in 2016 and the role of white women in Pennsylvania's closely contested Senate race.

The reading list mixes campaign classics like the 1972 book "The Boys on the Bus" by Timothy Crouse with articles from reporters on the campaign trail. Guest speakers have included Mike Wiser, a producer at PBS's "Frontline," Linda Winslow, former executive producer for "PBS NewsHour," and political-poll analyst Sam Wang, a Princeton professor of molecular biology and the Princeton Neuroscience Institute. 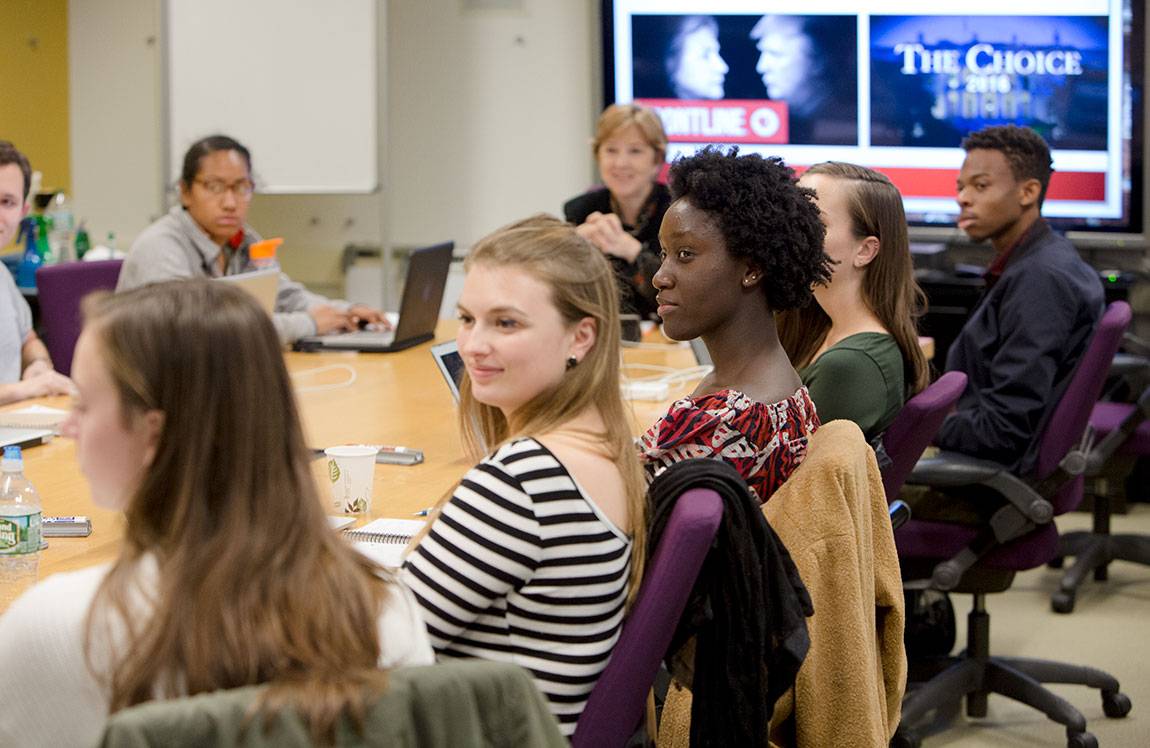 Students in the course spend their three-hour Tuesday seminars both looking back at previous campaigns and observing what's happening that week — or even that day — in the 2016 race. (Photo by Denise Applewhite, Office of Communications)

As the class gathered on the afternoon of Sept. 27, popular attention was squarely focused on Republican nominee Donald Trump, whose uneven performance in the previous night's first presidential debate had been watched by more than 80 million Americans. Thanks to McCleery's connections, good timing and video conferencing, the students got a firsthand perspective on Trump and covering his campaign from Washington Post reporter Jenna Johnson.

Johnson joined the seminar from the Miami airport on her way to cover Trump's first post-debate rally in Melbourne, Florida. She shared stories from the campaign trail, including what it was like to cover the candidate during the period the Trump campaign revoked the media privileges of Washington Post reporters. Students asked Johnson about how 2016 has been different from previous campaigns, what they should look for from Trump in the coming weeks and the atmosphere at the debate.

"It gave them a real glimpse of the campaign as it was happening, not after, and it gave them insights into [Johnson's] work," McCleery said. "For a class on journalism, for students enthused about the campaign, it was the money moment."

Election night: McCleery is planning a special session of the seminar on Tuesday, Nov. 8, that will be part election night viewing party and part newsroom exercise. For a few hours, the class will watch election coverage together, discussing and critiquing coverage on the room's giant monitor. Among the questions: Who's calling races first and why? Is breaking news truly breaking news? Is the analysis balanced, repetitive, accurate, informative? Later in the evening, the students will get to experience the challenge of journalists writing on deadline, composing a news story about some aspect of the night to be turned in before it ends. "I want the students to be part of what's happening while it's happening," McCleery said.

Off to Washington: In mid-November, the students will take a weekend trip to Washington, D.C., where they will get a behind-the-scenes look at production of "PBS NewsHour" on Friday and meet many of its key players, including anchor Judy Woodruff and political analysts Mark Shields and David Brooks. After a visit to the Newseum on Saturday morning, they will meet with a panel of young journalists from outlets including National Public Radio, PBS, CNN and The Guardian.

Student perspective: "I really appreciate the insider looks we get into the process. Before the class, I didn't know much about how political news was reported. We've not only chatted with some incredible guests — PBS documentary producers, polling gurus, boots-on-the-ground reporters — but we've also gotten a chance to read things that illuminate the process. Particularly informative was 'The Boys On The Bus,' a critique and profile of pack journalism from the '70s. I had no idea that was even something that happened, and I now know a lot more about the way campaign news is reported." — Will Rivitz, Class of 2018