by John Schoonejongen for the Office of Engineering Communications

Agriculture has long been blamed for smog-causing ammonia in the atmosphere, but vehicle tailpipes actually are a more important source of ammonia's contribution to the haze that hovers over big cities, according to new research by a team including Princeton engineers.

"Ammonia doesn't have to come all the way from the Midwest to Philadelphia or New York," said Mark Zondlo, an associate professor of civil and environmental engineering at Princeton University. "Much of it is being generated here." 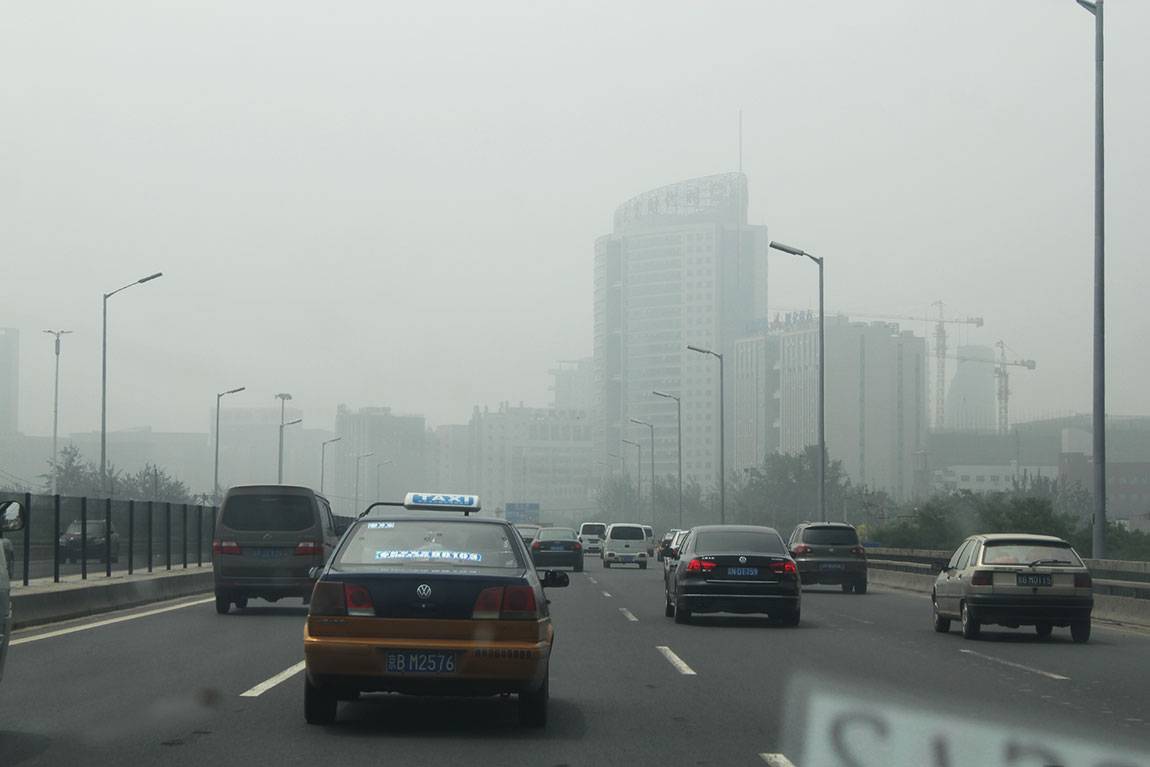 Agriculture has long been blamed for the ammonia that contributes to urban smog, but new research shows that the ammonia in hazy pollution like this in Beijing more typically comes from auto tailpipes rather than farm fields. (Photo by Kang Sun, Princeton University)

About 80 percent of airborne ammonia comes from farming practices such as fertilization, so it seems a likely suspect for the ammonia in haze particles to come from plumes of large farms in the Midwest and then get transported to the East Coast. But, in a paper published in the journal Environmental Science and Technology, Zondlo's research team found that ammonia emissions from cities are much larger than recognized, occur at the very times when unhealthy particulate matter is at its worst, and when agricultural emissions are at daily or seasonal lows.

"It's actually coming from the vehicles" in the cities themselves, said Zondlo, who is also an associate director of external partnerships at Princeton's Andlinger Center for Energy and the Environment.

The researchers noted that vehicle emissions of ammonia were co-emitted with nitrogen oxides. These chemicals combine to form ammonium nitrate, which can be seen from the brown color in urban haze. Further, ammonia emissions from vehicles are especially important during cold weather (e.g. during winter or the morning rush hour) when agricultural emissions are at their lowest and when haze pollution is at its worst.

Daven Henze, an associate professor at University of Colorado and researcher with NASA's Health and Air Quality Applied Sciences Team, said the findings were an important step to better understanding air pollution over cities. With other vehicle emissions — mainly nitrogen and sulfur compounds — in such close proximity to the ammonia, the conditions are ripe for the production of fine particulate matter.

"It's really useful to have his [Zondlo's] work making headway on clarifying the magnitude of the source," Henze said.

To conduct his research, Zondlo and his team outfitted vehicles with sophisticated sensors to detect ammonia levels and focused on six cities — Philadelphia, Denver and Houston in the United States, and Beijing, Shijiazhuang and Baoding in China. By measuring ammonia levels during various times of the day at different points of entry into the cities, the team was able to paint a picture of a "breathing" city, where levels of pollutants rise and fall, depending on traffic and conditions.

The research was aided by the use of open-path quantum cascade laser ammonia sensors developed by Zondlo’s group within Princeton’s Center for Mid-Infrared Technologies for Health and the Environment (MIRTHE). The laser-based sensors were smaller, easier to work with and more accurate than previously used sensors, Zondlo said. They also allowed for more efficient mobile testing.

Previously, vehicles had to be specially outfitted for data gathering. Holes were often drilled into the bodies of the vehicles to attach sensors. Banks of equipment were needed in the vehicle as well. Because the new sensors are relatively small, they can be mounted onto a luggage rack on top of the vehicle and then plugged into a laptop. This is the basis for their Princeton Atmospheric Chemistry Experiment mobile laboratory, a conventional SUV equipped with chemical and meteorological sensors.

"Because the sensors are low power (about the same as a light bulb) and compact, we can readily deploy them on any vehicle by only adding a ski rack," Zondlo said. "Existing mobile laboratories require custom vehicles with supplementary generators and significant sampling modifications. Our sensors can be placed in checked luggage and mounted in a few hours at a field site."

That convenience led to almost immediate discovery as the data was gathered.

Support for the project was provided in part by Council for International Teaching and Research at Princeton University with funds from the Fung Global Forum, National Geographic Air and Water Conservation Fund,  the National Science Foundation, NASA and the Houston Endowment.

Pan said the research opens up two avenues for further study: How the proximity of ammonia and nitrogen and sulfur compounds in emissions affects fine particulate matter production, and how the data eventually could influence vehicle emissions regulations. Zondlo is also investigating how satellite observations of ammonia can help understand these emissions as part of the NASA Health and Air Quality Applied Sciences Team.

The efforts made to reduce nitrogen and sulfur emissions have been a big "success story," Zondlo said. Further progress in controlling particulate matter by these two species will only be incremental in the developed world.

"We've pulled these levers as much as we can," Zondlo said. "But there's one big lever that we haven't touched at all and that's been ammonia. And if we're really serious about attacking fine particulate matter and improving air quality, we need to start understanding and eventually limiting these ammonia emissions."