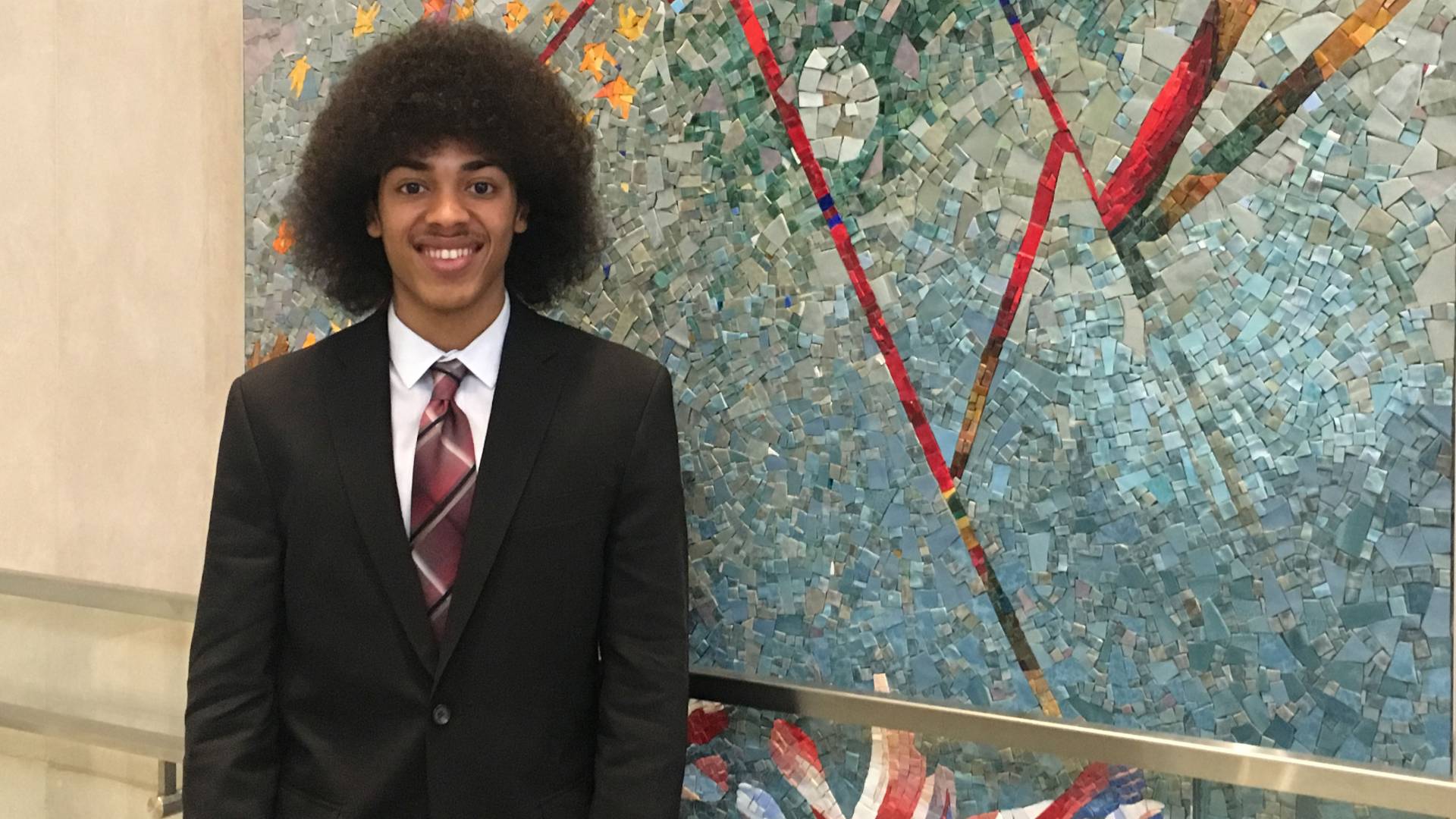 Thomas, of Newark, New Jersey, is concentrating in the Woodrow Wilson School of Public and International Affairs and is also earning certificates in Portuguese language and culture and African American studies. At Oxford, he plans to pursue an M.Phil. in Evidence-Based Social Intervention and Policy Evaluation.

Upon learning he had won the scholarship, Thomas said: "The entire moment was really quite surreal. After waiting in a suite at Yankee Stadium for what seemed like an eternity, the selection committee called all of the finalists into the other room and announced that they had reached a final decision. When I heard them call my name, I was in shock for a moment, and then my instant reaction was to shake the hand of all the other finalists and thank them for making this stressful weekend so enjoyable.

"My parents were outside waiting to drive me home, and so they were the first people I told," he said. "They were so overcome with emotion that they had to pull over and wipe away tears of joy before we could continue driving!"

Thomas said he is looking forward to his time at Oxford for several reasons.

"Although I'm highly excited about the technical skills and knowledge that I'll gain as a Rhodes Scholar, in many ways it's the intangible benefits that excite me most. I have no doubt that two years at Oxford will stimulate deep reflection, personal development and a profound evolution of the way that I view myself and the world. When I ultimately leave Oxford, I will likely have changed in ways that I never anticipated, and that unpredictable self-transformation is a significant part of what I am looking forward to most as a Rhodes Scholar."

Thomas' senior thesis focuses on the scope of school-based support services the Newark Public Schools District (NPS) offers pregnant and parenting teens. "Specifically, this study aims to assess whether there is a gap between the standards and best practices established nationally and the actual services provided in the district," Thomas said.

Thomas has firsthand experience with NPS, which represents over 40,000 students. He served as the student representative on the district's advisory board in 2013-14, prior to coming to Princeton.

That year was one of the most turbulent in that district's history, Thomas wrote in his Rhodes application. His experience led him "to make two commitments — one being that I would pursue a career in public service and advocate for those most in need of a voice and a helping hand; and the other being that I would always strive to act in the best interests of those affected by my leadership," he wrote.

Elizabeth Mitchell Armstrong, an associate professor of sociology and public affairs, has known Thomas since his first days at Princeton, having served as his freshman adviser as well as adviser on his junior paper and senior thesis.

"What struck me from the very first was the balance he struck between being willing to pursue new paths while keeping his focus firmly on his educational goals," said Armstrong, a 1993 graduate alumna of the Woodrow Wilson School. "Neither dilettante nor grind, he is able to balance a disciplined work ethic with a spirit of exploration."

She said his thesis extends his interest in maternal and child health, which began with his junior paper exploring college students’ knowledge and beliefs about preconception health, and his investigation of health care for women incarcerated at Rikers Island as part of his Wilson School policy task force last spring.

Armstrong also noted "his humility and his genuine sense of gratitude; entitlement is antithetical to his character. He has the heart of a public servant, the mind of a scholar and the courage of his convictions. He truly embodies the highest aspirations we have for our students at Princeton — and beyond, as citizens of the world," she said.

After completing the Rhodes Scholarship, Thomas plans to pursue a law degree and gain experience in a nonprofit or public interest law firm before transitioning into government by either pursuing a position in the U.S. Department of Education or running for public office.

"[A]s a Newark native, I view the track taken by New Jersey Senator Cory Booker as an inspiration — Newark City Council, then mayor of Newark and ultimately the U.S. Senate," Thomas said. "Perhaps the offices I pursue will be different, but I have no doubt that I want to serve my hometown before running for a state or federal position."

At Princeton, Thomas has pursued his interest in education and civic service in the United States and abroad. In summer 2017, as part of the Wilson School's Scholars in the Nation's Service in Washington, D.C., he interned in the Office for Civil Rights' Program Legal Group, assisting civil rights attorneys in enforcing federal civil rights laws and conducting legal and policy research. In summer 2016, through Princeton's International Internships Program, Thomas interned with a law firm in Lisbon, Portugal, then spent a month in the favela neighborhoods of Rio de Janeiro as a volunteer with the LIVE Olympic Project, performing humanitarian and environmental service.

Outside the classroom, Thomas is a fellow for the Freshman Scholars Institute and the Pace Center for Civic Engagement. He is a residential college adviser in Rockefeller College, one of Princeton's six residential colleges. He also serves on the executive board of Community House, which supports underrepresented area youth in academic success and social-emotional literacy. Thomas served as an advocacy project coordinator for the Princeton chapter of Students for Education Reform and as a mentor for the Princeton College Counseling Project, which supports underprivileged juniors and seniors navigating the college application process at Trenton Central High School.

Charlotte Collins, associate director of the Pace Center, said Thomas "recognizes the importance in taking the theories he learns in the classroom and applying them to the world around him. He is open-minded, open-hearted, and has an innate ability to hear and connect with others.

"Jordan is a leader in the truest sense, a person who is committed to making meaningful and lasting change in his immediate community and the world," she said.

Thomas is also a member of the Office of International Programs Student Advisory Board and a student trustee of the board of the Princeton University Store.