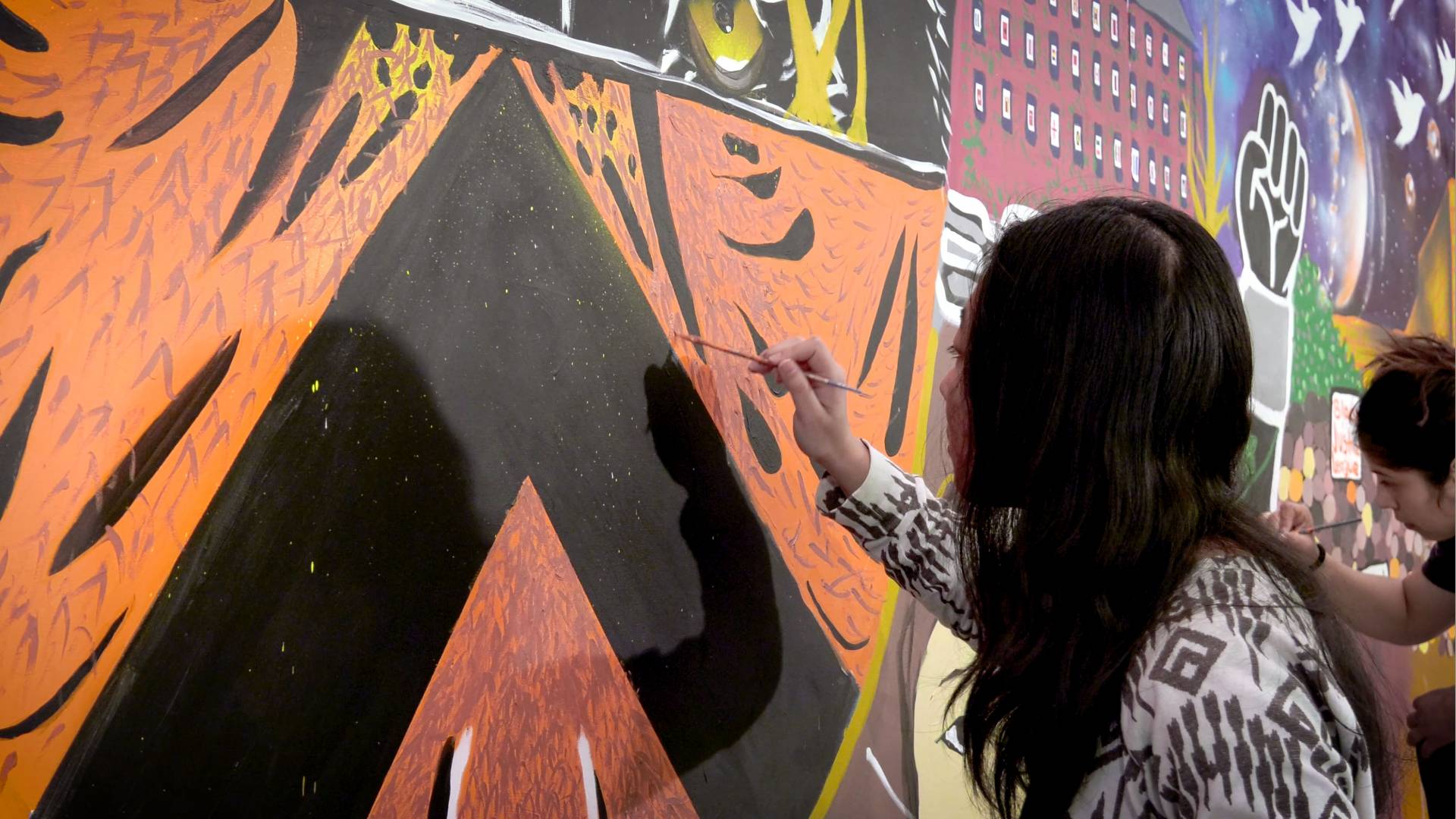 Over spring break, Princeton students worked with local artist Will Kasso Condry to create a community mural in Butler College showing their perspective on the University's history and path toward inclusivity.

Sheets of plastic line the tile floor outside Butler College’s Studio ’34 café on the first day of spring break. Tungsten flood lights wash out a bright white 40-foot canvas hung along the walls of the hallway. As students stumble in for a 10 a.m. brainstorm, Campus Dining prepares a table with bagels, orange juice and other breakfast items — fuel for the busy day ahead.

Students who remained on campus during spring break this semester were presented with a unique opportunity to leave their mark on Princeton University, as shown in the video above. Butler College commissioned a community mural, with support from the Campus Iconography Committee, which works to diversify art at Princeton to better represent its history, be inclusive of all community members, and create spaces for dialogue and reflection. Butler College also partnered with the Pace Center for Civic Engagement to make the mural effort a Breakout Local Spring Break Opportunity, in which students are connected with Princeton-area projects that have a direct impact on the community and social issues.

“We used to have a graffiti night in January for students in our gallery space. One year we had Will join us to talk about street art. Fast forward five years later, I knew that I had to get him back to help the students create the mural,” Shelton said.

During that time, Condry had moved from Trenton to Middlebury, Vermont, where he met his wife, Jennifer Herrera Condry, the associate director of the multicultural center at Middlebury College.

During spring break, the couple worked with the students to illustrate an interpretation of modern-day Princeton.

“You have to be social in doing community murals and public art,” Will Kasso Condry said. “It’s an opportunity for me to educate them and also to be educated about the area because there are certain things that I may not know that are pivotal to the outcome of the product.”

On the morning of day one of the mural painting, about 15 students sat in a circle on top of the plastic sheets to share their ideas and develop themes with the Condrys. In the weeks leading up to spring break, some students took a public mural tour in Trenton led by staff at the visual arts center Artworks, and they participated in a lunchtime discussion, “Writing on the Walls,” with Butler fellow and program manager of the Princeton Mellon Initiative Aaron Shkuda.

Inspired by these experiences, students decided to focus the mural on a diverse group of figures in Princeton’s history and changes happening on campus today. Topics included the 2017 dedication of Morrison Hall in honor of Toni Morrison, the upcoming 50th anniversary of the matriculation of undergraduate women at Princeton, and the expansion of LGBTQ rights in America. Students, joined by a handful of faculty and staff, worked with Will Kasso Condry on completing the mural over the next four days.

Shelton says that though the mural’s location outside Studio ’34 is temporary, it will remain on display inside Butler College’s gallery space as long as the community enjoys it. Afterward, it will be permanently installed near the classrooms on the lower level of the dorm complex for students to appreciate.