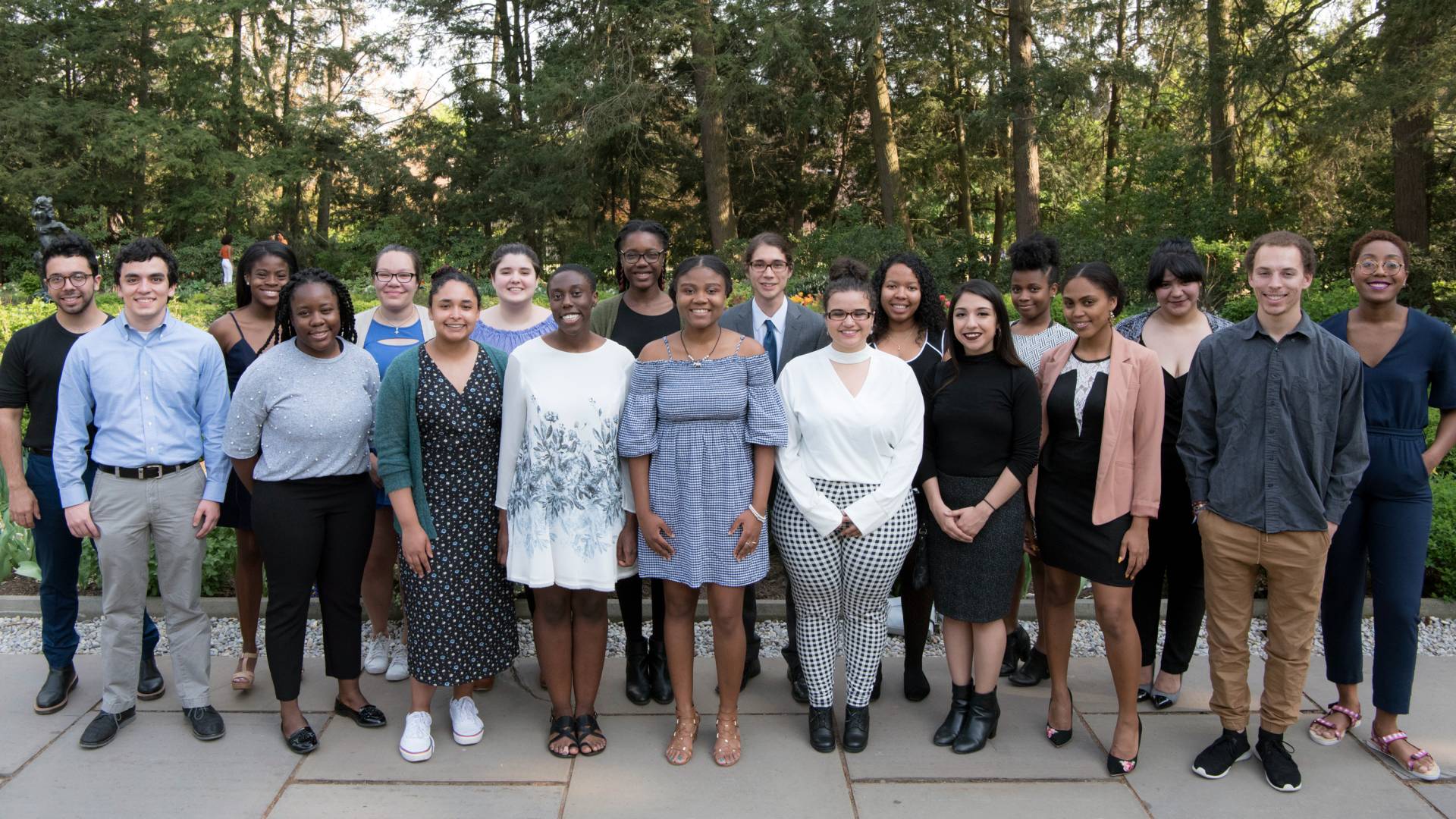 The national Mellon Mays Undergraduate Fellowship Program provides funding for undergraduate research and graduate school studies to prepare students for professorial careers. Princeton was an early participant in the program, which is aimed at diversifying faculty at colleges and universities. Shown here are the Princeton sophomores, juniors and seniors who are currently Mellon Mays fellows.

Six Princeton undergraduates have been named 2018 Mellon Mays fellows, marking the 30th group of Princeton students who have been selected for the prestigious national award aimed at diversifying faculty at colleges and universities.

Supported by the Andrew W. Mellon Foundation, the Mellon Mays Undergraduate Fellowship Program facilitates funding for undergraduate research and graduate school studies to prepare students for professorial careers. The fellowship provides support, community, mentorship and other resources to students from underrepresented backgrounds and/or students who have a demonstrated commitment to diversity and inclusion.

This year’s fellows are Class of 2020 members Kenji Cataldo, Oluwatoyin Edogun, Yousef Elzalabany, Jaylin Lugardo, Matthew Oakland and Rasheeda Saka. Edogun was named a Mellon Residential Associate Fellow with support from Princeton for her fellowship, while the other students were named Mellon Mays Undergraduate Fellows and will receive funding directly from the Mellon Foundation. 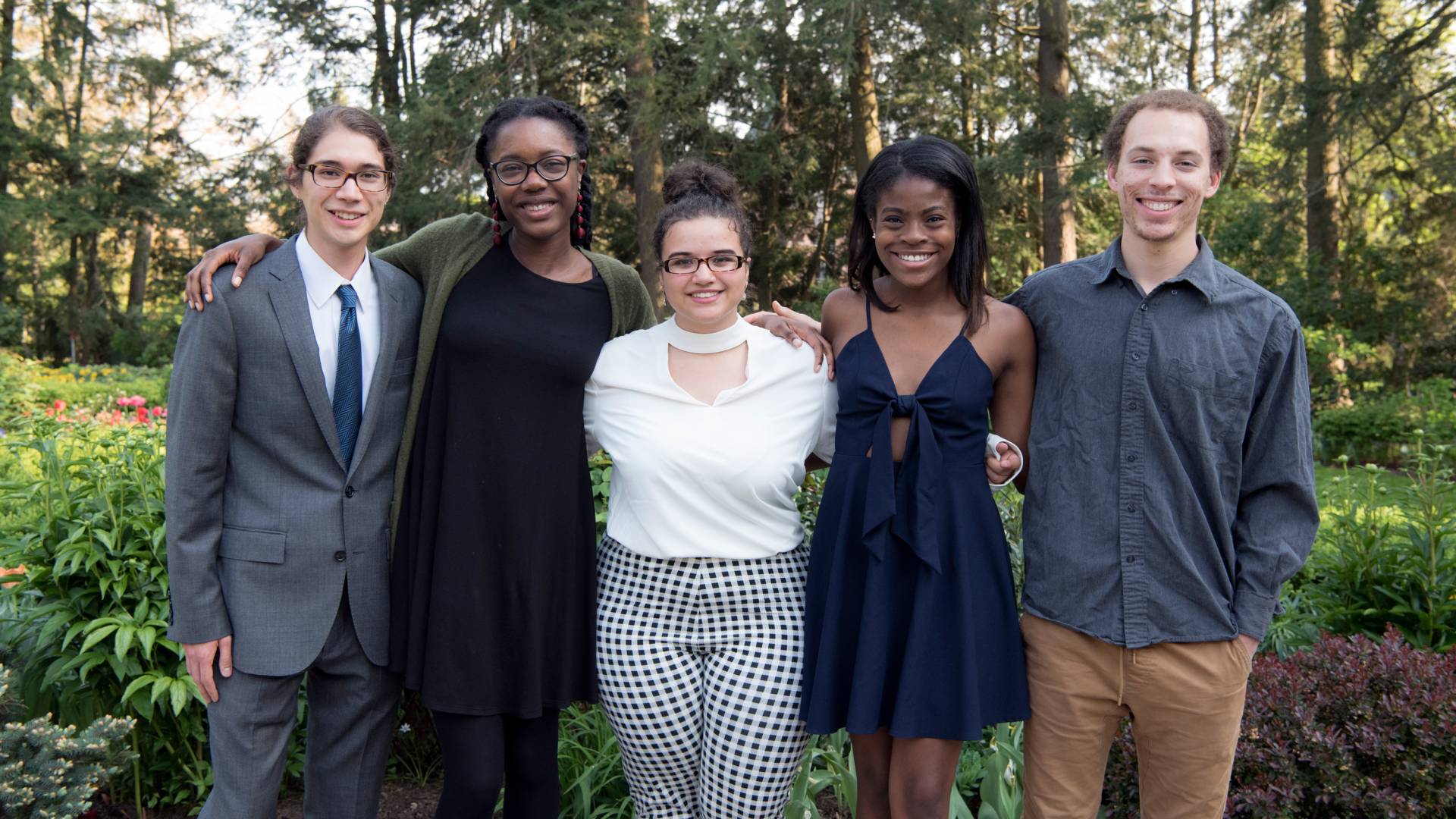 Princeton’s Mellon Mays program is administered by the Office of the Dean of the College.

The Mellon Mays Undergraduate Fellowship was established in 1988 as a way to address underrepresentation among college and university professors. The fellowship has grown to include 48 member schools and three consortia, including three South African universities and a consortium of historically black colleges and universities. As of 2017, over 5,000 students have been selected as fellows, more than 700 of whom have earned Ph.D. degrees and over 100 of whom are now tenured faculty members, according to the Mellon Foundation.

Princeton was an early member of the program, with 152 Princeton students named Mellon Mays fellows to date. The fellowship is among various University initiatives to help diversify higher education, spanning the undergraduate, graduate student and faculty levels.

Fellows are selected in the spring of the sophomore year through a competitive application process. In their junior and senior years, fellows attend monthly workshops designed to enhance research skills and deepen awareness of the challenges and rewards of teaching and scholarship; meet regularly with faculty mentors; attend academic conferences; and build their network of colleagues at Princeton and on other campuses.

Once undergraduate studies are complete, fellows receive funding to pursue a doctoral degree in a designated set of fields in the humanities, social sciences and natural sciences.

Kenji Cataldo is from St. Paul, Minnesota, majoring in history with a certificate in South Asian studies. He spent nine months in India through Princeton’s Bridge Year Program, where he learned Hindi and volunteered at a health and education center. Continuing his study of South Asian languages, he returned to India the summer after his first year to study Urdu through a Critical Language Scholarship. His research interests lie in the history of medicine in South Asia and Europe. Outside of academics, he enjoys playing piano and leads orientation trips in the Outdoor Action program.

Oluwatoyin (Toyin) Edogun is from Smyrna, Tennessee. She is pursuing a concentration in African American studies. Her research focus is on leisure as activism as it regards to the African American community. She is president of the Association of Black Women at Princeton, a member of the University’s cheerleading team and a dancer with DoroBucci, Princeton’s only African dance group.

Yousef Elzalabany is from Allentown, Pennsylvania. He is pursuing a concentration in Near Eastern studies, with certificates in humanistic studies, Latin American studies and creative writing. He has spent his time at Princeton advocating for the inclusion of the Middle Eastern intellectual tradition in the Western humanistic canon. His primary research interest is exploring the links between modern Latin America and the Middle East. He hopes to explore the history of Cuban-Arab solidarity, in particular.

Jaylin Lugardo is from Newark, New Jersey. She is pursuing a concentration in classics, with certificates in Hellenic studies and humanistic studies. She aspires to bring conflicting worlds together in conversation in both her academic and personal life. Her primary research interest is the use of digital mapping and data-driven techniques in tandem with a historical analysis of the Roman Empire in the Late Classical Antiquity period, to unveil more about ancient history and the present.

Matthew Oakland is from Sacramento, California. He is pursuing a concentration in African American studies, with certificates in Spanish language and culture and Latin American studies. He participated in the Bridge Year Program in Bolivia, where his interests in Latin American communities and Spanish were fostered. In the summer of 2017, he completed ethnographic research on the Afro-Cuban cultural space “Callejon de Hamel,” in Havana. On campus, he is a member of the “Woke Wednesdays” student podcast and video series; the Black Organization for Leadership Development; the Petey Greene Program, a prison tutor program; the Black Student-Alumni Coalition; and is a peer educator with the Lesbian, Gay, Bisexual and Transgender Center.

Rasheeda Saka is from Randallstown, Maryland. She is majoring in English and pursuing certificates in creative writing and Spanish. Her research interests include postcolonial Caribbean and African literatures. Saka is particularly interested in how third-generation Nigerian women writers negotiate postcolonial life in their works of fiction. Saka was selected as one of the eight honorees for the 2018 Breakout 8 Writers Prize, a joint initiative led by “Epiphany” magazine and the Authors Guild.