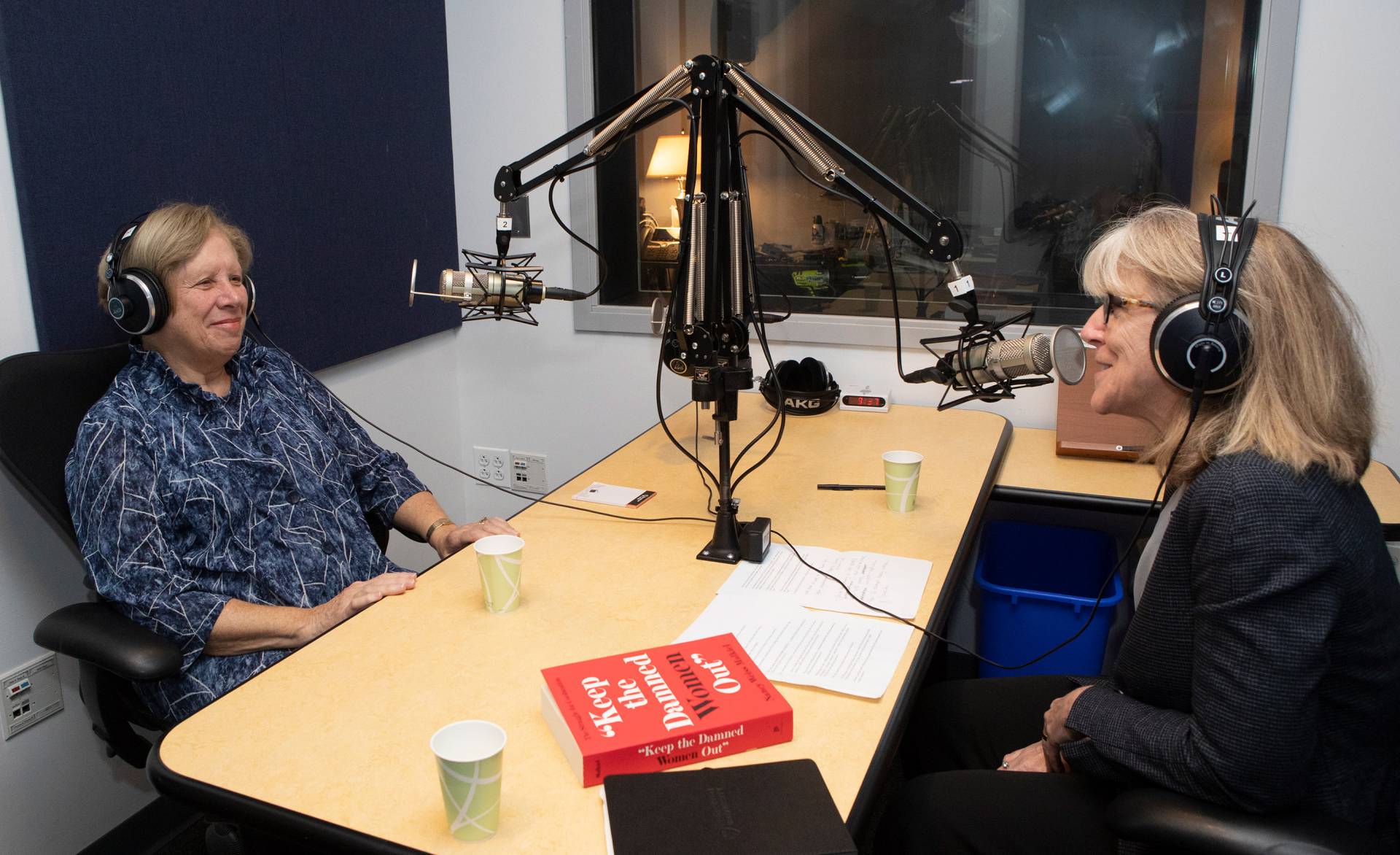 In episode 1 of the new She Roars Podcast, Nancy Malkiel, left, discusses the pivotal few years starting around 1969 when a handful of elite, all-male universities in the U.S. and U.K. took steps to admit women. Margaret Koval, right, director of special projects in the Office of Communications, hosts  the podcast.

Through monthly episodes, the She Roars Podcast will present the views of remarkable Princeton women graduates, faculty, administrators and visitors.

The first two episodes are available for free on iTunes, Spotify and other podcast platforms. Princeton professor and author Nancy Weiss Malkiel talks about her book “Keep the Damned Women Out: The Struggle for Coeducation” and journalist Jennifer Epstein shares stories from covering the White House during the Trump and Obama administrations.

“After some 50 years since undergraduate coeducation at Princeton, the women of this University have roared to the forefront of just about every walk of life,” said podcast host Margaret Koval, director of special projects in Princeton’s Office of Communications. “From the Supreme Court to the U.S. Congress; from boardrooms to classrooms; from laboratories, war zones, and newsrooms to stages, startups and writer’s desks — Princeton women have penetrating views on things that matter. These are change-makers working ‘in the nation’s service and the service of humanity.’”

Podcast guests will discuss the joys, frustrations, obstacles and benefits of living lives of engagement and commitment. They will address pressing issues and talk about personal choices. Future episodes will include an interview with the 2018 Nobel Prize in Chemistry winner Frances Arnold, who earned a B.S.E. in mechanical and aerospace engineering from Princeton in 1979.

In episode 1, Malkiel discusses the pivotal few years starting around 1969 when a handful of elite, all-male universities in the U.S. and U.K. took steps to admit women. Princeton was at the forefront and Malkiel was an eyewitness to how it unfolded. Malkiel is a former dean of the college and professor of history emeritus She joined the Princeton faculty in 1969 as one of only three women in the professorial ranks.  The road from there wasn’t always smooth — and Malkiel sees milestones yet to be reached — but five decades later, she can claim to have taught, among many other accomplished students, two Princeton women (Sonia Sotomayor and Elena Kagan) and one man (Samuel Alito) who now sit on the Supreme Court of the United States.

In episode 2, Epstein, a Class of 2008 graduate, recalls how she started covering President Barack Obama for Politico just three years out of Princeton and spent her 26th birthday aboard Air Force One. Seven years later, Epstein is a savvy veteran with trench-level views of how the journalism industry is transforming. She discusses questions of journalistic impartiality, digital disruptions to the journalism business model and whether journalism is still a good career for graduates.

ABOUT THE HOST:  An Emmy-award winning journalist, Margaret Koval is a 1983 Princeton graduate alumna. She worked briefly for the U.S. Congress prior to launching a career in broadcasting. Koval wrote and produced for the ABC News programs “Nightline” and “20/20,” then began making documentaries for PBS.  A founding partner of two independent film companies, she dedicated herself to historical programming. She was the Washington Desk editor and the Sustainability Desk editor for the public radio franchise “Marketplace.” She did stints with the Science Museum in London and at the University of Oxford, and is now director of special projects at Princeton University’s Office of Communications.