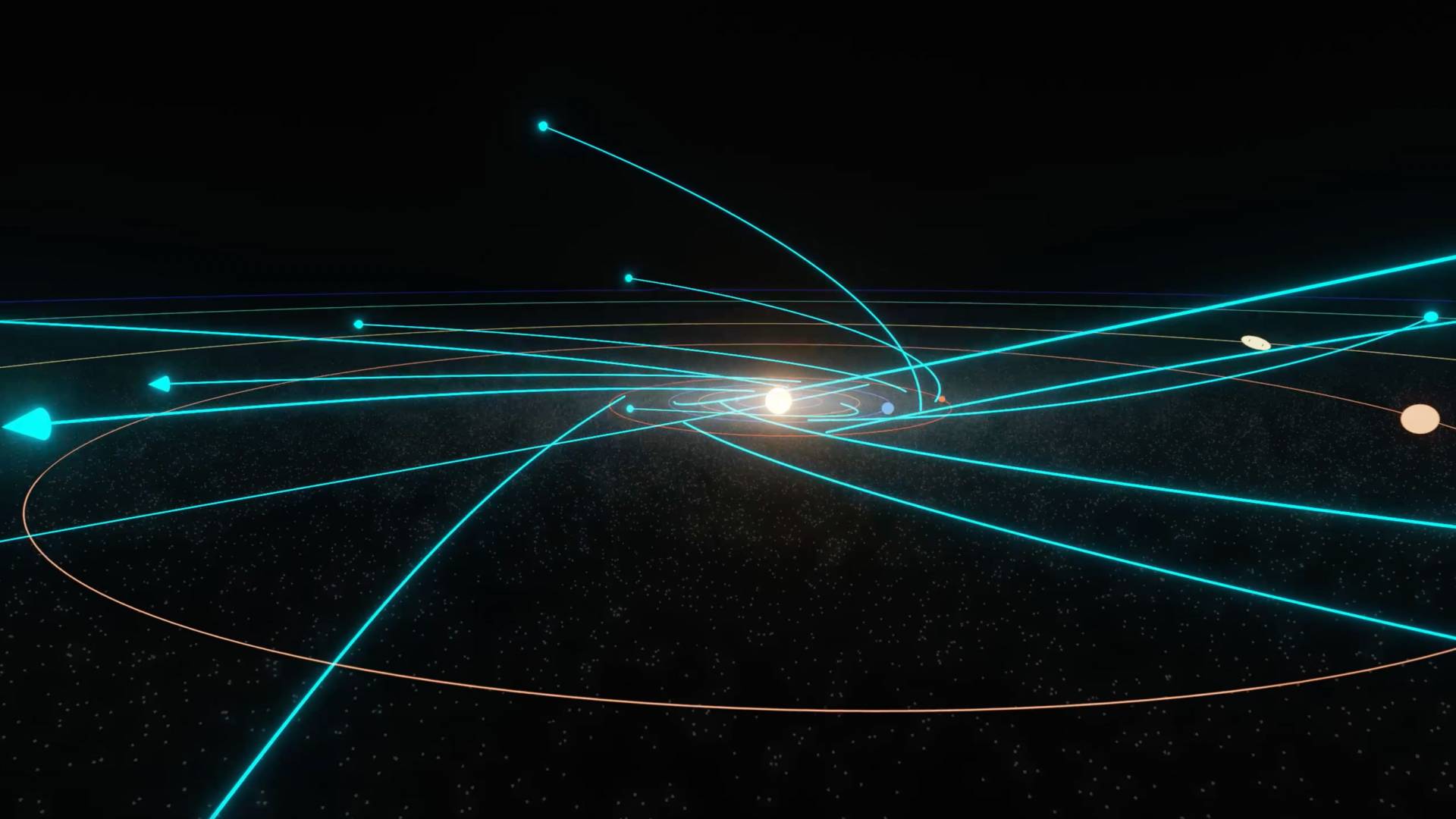 Scientists using data from NASA’s Parker Solar Probe have assembled the most complete picture yet of the inner structure and behavior of the large cloud of space dust, known as the zodiacal cloud, that swirls throughout the solar system. They found three dust populations in the cloud. Most of the grains are being slowly pulled in toward the Sun (alpha-meteoroids); the second population is generated as grains in the swirling cloud collide, creating fragments so small that they are pushed out of the solar system in all directions by pressure from sunlight (beta-meteoroids); and a third group, probably created when a “tube” of cometary debris collides with grains from the first two populations, that is scattered out in a distinctive wedge shape.

What do shooting stars and astronaut safety have in common?

When these particles collide with Earth’s atmosphere, they create meteors — better known as shooting stars — as they vaporize and leave flaming trails through the air. When they collide with astronauts or rockets, they can puncture tiny holes — or worse. Understanding the sources and patterns of this interplanetary dust is therefore very important to NASA, as it plans for missions to the moon, Mars and beyond.

During its revolutions around the sun, the Parker Solar Probe spacecraft, the mission going closer to the sun than anything in spacefaring history, is bombarded by these dust particles. When crashing onto the spacecraft, the tiny grains — some as small as a ten-thousandth of a millimeter across — vaporize and release a cloud of electrically charged particles that can be detected by FIELDS, a suite of instruments designed to detect electric and magnetic fields.

A pair of papers publishing this week in the Planetary Science Journal use FIELDS data to take an up-close look at the “zodiacal cloud,” the collective term for these tiny particles.

“Every solar system has a zodiacal cloud, and we actually get to explore ours and understand how it works,” said Jamey Szalay, an associate research scholar in astrophysical sciences at Princeton who is the lead author on one of the papers. “Understanding the evolution and dynamics of our zodiacal cloud will allow us to better understand every zodiacal observation we’ve seen around any other solar system.”

The zodiacal cloud scatters sunlight in a way that can be seen with the naked eye, but only on very dark, clear nights, as moonlight or light from cities both easily outshine it. Thickest near the sun and thinnest near the edges of the solar system, the zodiacal cloud looks smooth to the naked eye, but infrared wavelengths reveal bright streaks and ribbons that can be traced back to their sources: comets and asteroids.

With data from Parker’s first six orbits, together with computer modeling of the particle motion in the inner solar system, Szalay and his colleagues disentangled those streaks and ribbons to reveal two different populations of dust in the zodiacal cloud: the tiny grains ever-so-slowly spiraling in towards the sun over thousands to millions of years, known as alpha-meteoroids; and then, as the swirling cloud gets denser, the larger grains collide and create ever-smaller fragments known as beta-meteoroids that are subsequently pushed away from the sun by the pressure from sunlight.

And not just nudged a bit, either. “When a fragment becomes small enough, radiation pressure — solar light — is actually strong enough to blow it out of the solar system,” Szalay said.

“The existence of such tiny grains was repeatedly reported from dedicated spacecraft dust measurements in the region between Earth and Mars, but never in the inner solar system where these particles were thought to originate,” said Harald Krüger, a zodiacal dust expert with the Max Planck Institute for Solar System Research and a co-author on Szalay's paper. “Thus, the FIELDS instrument offers a new window to study these solar light-driven dust particles close to their source region.”

FIELDS also detected a narrow stream of particles that appeared to be released from a discrete source, forming a delicate structure in the zodiacal dust cloud. To understand this third component, Szalay went back to the origins of the zodiacal dust: comets and asteroids.

Comets, dust-filled snowballs traveling through our solar system in long, elliptical orbits, eject copious amounts of dust when they get close enough to the sun to start vaporizing their ice and dry ice. Asteroids, large and small rocks orbiting the sun between Mars and Jupiter, release dust when they collide with each other. Some of these grains are knocked off in any direction, but most are trapped in the orbits of their parent body, explained Szalay, meaning that over the course of thousands of orbits, a comet’s track becomes more like a gravel road than an empty path with one shining orb and a bright trail. (Over millions of orbits, the grains will scatter beyond their orbital path, merging into the zodiacal background cloud.)

Szalay refers to these dust-strewn paths as “tubes” of cometary or asteroidal debris. “If Earth crosses that tube in any place, we get a meteor shower,” he said.

He theorized that the Parker Solar Probe may have traveled through one of these. “Maybe there’s a dense tube that we just couldn't have observed any other way other than by Parker literally flying through and getting sandblasted by it,” he said.

But the tubes closest to Parker’s path didn’t seem to have enough material to cause the data spike. So Szalay proposed another theory. Maybe one of these meteoroid tubes — most likely the Geminids, which every December cause one of Earth’s most intense meteor showers — was colliding at high speeds against the inner zodiacal cloud itself. The impacts between the tube and zodiacal dust could produce large quantities of beta-meteoroids that don't blast off in random directions, but are focused into a narrow set of paths.

“We’ve termed this a ‘beta-stream,’ which is a new contribution to the field,” Szalay said. “These beta-streams are expected to be a fundamental physical process at all circumstellar planetary disks.”

“One of the important aspects of this article is the fact that Parker Solar Probe is the first spacecraft that reaches so close to the Sun that it penetrates the regions where mutual particle collisions are the most frequent,” said Petr Pokorný, a zodiacal cloud modeler with NASA and the Catholic University of America, who was a co-author on Szalay's paper. “Mutual particle collisions are important not only in our solar system, but in all exosolar systems. This article gives the modeling community a unique insight into this previously uncharted territory.”

“Parker essentially experienced its own meteor shower,” Szalay said. “It either flew through one of those tubes of material, or it flew through a beta-stream.”

The stream was also spotted by Anna Pusack, then an undergraduate at the University of Colorado-Boulder. “I saw this wedge-like shape in my data, and my advisor, David Malaspina, suggested I present the work to Jamey,” she said. “The wedge shape seemed to indicate a strong spray, or what Jamey called a beta-stream in his new models, of small particles hitting the spacecraft in a very directed manner. This was incredible for me, to connect the data I had analyzed to theoretical work done on the other side of the country. For a young scientist, it really sparked all the excitement and possibility that can come from collaborative work.”

Pusack is the lead author on the paper being published jointly with Szalay’s. “These papers really do go hand in hand,” she said. “The data supports the models, and the models help explain the data.”

“This is a tremendous contribution to our understanding of the zodiacal cloud, the near-sun dust environment more broadly, and the dust risks to NASA’s Parker Solar Probe mission,” said David McComas, a professor of astrophysical sciences at Princeton University and the vice president for the Princeton Plasma Physics Laboratory, who is the principal investigator for ISʘIS, another instrument on board Parker Solar Probe, and for the upcoming Interstellar Mapping and Acceleration Probe (IMAP) mission.