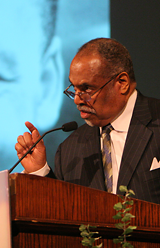 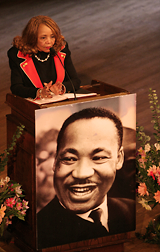 Marvalene Hughes, president of Dillard University, told the audience that King's leadership provides inspiration as she oversees the rebuilding of the New Orleans institution, which was devastated by Hurricane Katrina.

At left: The Princeton University Jazztet entertained the audience in Richardson Auditorium.

The Rev. Charles G. Adams, a renowned pastor and activist, delivered an impassioned address urging people to emulate King and embrace the "dynamics of hope." The University also recognized Marvalene Hughes, the president of Dillard University, and Albert Raboteau, a longtime Princeton faculty member, for their inspirational leadership.

Adams, pastor of the Hartford Memorial Baptist Church in Detroit and a leader in faith-based economic development, cited King as an embodiment of how the power of hope can bring about real change to the world's many problems.

"You who are here in honor of Martin Luther King, you are the open doors of hope into a system that seems closed, final, futile and fatal," Adams said. "You who are privileged to be in this wonderful university are today being called and challenged to go into all the world and stand and serve it as living alternatives to ignorant optimism ... and crippling fatalism."

In her address, Hughes detailed the destruction wrought by Hurricane Katrina on the New Orleans institution's campus, where every building but one was flooded. Dillard, a historically black university, shut down for the fall semester but this month reopened at a downtown hotel and various campuses around the city. The effort was aided by Princeton and Brown universities, which formed a partnership in September to help Dillard restore operations both in the short and long term.

Hughes, who took office as Dillard's president nearly two months before Katrina, noted that she finds inspiration in King's leadership as she faces the challenges of overseeing the university's reconstruction.

"In addition to the 'I Have a Dream' speech, we must think about the lifelong legacy that he left for us and the standards of leadership that he gave to us. I think of them often, and I think of how important they are to uplift me and keep me going," she said.

"Our support has taken many forms -- from technical assistance to material resources -- and we stand ready to do more in the months and years ahead. Together, 'we shall overcome' the legacy of Hurricane Katrina, but it is Dillard's president, faculty, staff and students who will lead the way," Tilghman said. 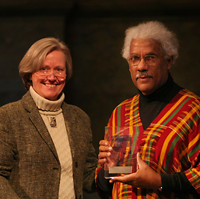 Tilghman also presented Raboteau, one of the nation's foremost authorities on African-American religious history, with the MLK Day Journey Award for Lifetime Service. The award was instituted last year to recognize members of the Princeton campus community for their support for King's philosophy and teachings and their contributions to the improvement of civil rights and/or human rights.

In addition, the ceremony included the presentation of awards to essay, poster and video contest winners from area schools. This year's contests were intended to emphasize the power of the vote, in recognition of King's role in championing equal voting rights for all American citizens. 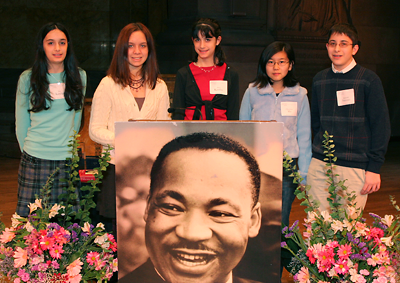