by Kitta MacPherson and Chris Emery 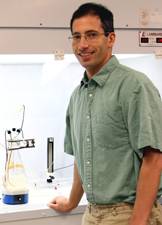 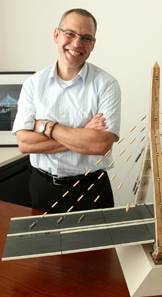 Daniel Sigman, a Princeton University biogeochemist who has conducted pioneering work exploring the large-scale systems that have supported life on the planet throughout the millennia, has been selected as a 2009 MacArthur Fellow.

Also chosen was Theodore Zoli, a 1988 alumnus and a visiting lecturer in Princeton's Department of Civil and Environmental Engineering since 2003. Zoli is a structural engineer who has developed novel ways of protecting transportation infrastructure in the event of natural and man-made disasters.

The John D. and Catherine T. MacArthur Foundation announced that Sigman, the Dusenbury Professor of Geological and Geophysical Sciences, and Zoli are among 24 trailblazing artists, writers, scientists and others who each will receive a $500,000 no-strings-attached grant over a five-year period. The fellowships, known informally as "genius grants," honor the winners for their creativity, originality and potential to make important contributions to the future.

Sigman is searching for the underlying mechanisms that explain how life on Earth has been sustained through a web of chemical, biological and physical forces over time. In doing so, he has developed methods to track the flow of elements vital to life, such as nitrogen and carbon, today and in the past.

His methods for analyzing isotopes of nitrogen have helped show how different processes in the ocean's nitrogen cycle respond to one another. His research also focuses on the role of the ocean's "biological carbon pump" -- in which the sinking of dead algae sequesters carbon dioxide in the deep ocean -- in Earth's climate history. Using deep-sea sediment cores from throughout the world's oceans, Sigman is carefully reconstructing the contribution of ocean biology to the carbon cycle over time.

"Danny Sigman has established a first-rate laboratory with a world-class reputation and a major scientific impact in the field of isotope geochemistry," said Bess Ward, the William J. Sinclair Professor of Geosciences and chair of Princeton's Department of Geosciences. "His new methods for the analysis of nitrogen and oxygen isotope composition of nitrate and other compounds are far superior to previously existing methods in terms of sensitivity and speed of analysis."

Sigman's methods, she said, have been adopted worldwide. "They have enabled Danny, his students and colleagues, and a growing international cadre of researchers to address a range of problems that were previously inaccessible," Ward added.

Through collaborations with the Bermuda Institute of Ocean Sciences, Sigman teaches courses in ocean science that offer field and lab experiences. These include a freshman seminar, "The Ocean Environment," and a summer course, "Observing the Marine Environment." Through a project funded by the National Science Foundation, he also offers summer research internships for Princeton undergraduates.

Sigman came to Princeton in 1998 as a Harry Hess Postdoctoral Fellow and joined the faculty in 2000. He earned his Ph.D. from the Massachusetts Institute of Technology/Woods Hole Oceanographic Institution Joint Program in Oceanography. In 2005, he received a National Science Foundation CAREER Award. He also has been awarded the Macelwane Medal of the American Geophysical Union and the Friedrich Wilhelm Bessel Award of the Alexander von Humboldt Foundation.

"Darwin explained why individual organisms work: natural selection," Sigman said. "My field seeks a similarly general theory for the Earth's maintenance of habitable conditions for complex organisms over millions of years. Given the passage of biologically necessary elements into and out of the environment on typically much shorter time scales, this continuous habitability is remarkable and mysterious."

MacArthur Fellows are nominated anonymously by leaders in their respective fields and learn of their selection only when they receive a call from the MacArthur Foundation several days before the public announcement.

"My first emotion was embarrassment," Sigman said. "The director of the Fellows Program was on the other end of the phone line, explaining to me why I had been selected, and all I could do was say, 'Wow.' The next emotion was gratitude, for those who have advised me and worked with me over the years, and for those who took the time and effort to nominate me. In the highly interactive disciplines of environmental geoscience, no one's achievements can be taken in isolation."

Sigman said he will use the award to support his research. "I am remarkably prone to obsess about the daily operation of my research facilities," he said. "This support will provide freedom to obsess more creatively, to increase the number of stupid things I try, and to spend more time interacting with colleagues and with my own research group on topics other than how tightly to seal a vial."

Zoli, who earned his B.S. in civil engineering and operations research from Princeton and his M.S. from the California Institute of Technology, is vice president and technical director of bridges in the New York office of the HNTB Corp., based in Kansas City, Mo. In the aftermath of Sept. 11, 2001, he has focused on developing armoring strategies to retrofit iconic bridges across the United States to maintain their structural integrity against the possibility of damage from explosion. Drawing from military research on terrorist weapon technologies and tank armor, he developed a novel composite material that represents the state of the art in lightweight, blast-resistant coverings for a broad array of construction applications.

As a structural engineer, he also has led the design of elegant and enduring bridges around the world. He is an expert on long-span, cable-supported bridges. He has played a key role in the creation of a number of contemporary structures, including the Leonard P. Zakim Bunker Hill Bridge in Boston and the Blennerhassett Island Bridge over the Ohio River near Parkersburg, W.Va. Closer to Princeton, he has collaborated with noted Swiss engineer Christian Menn on the design of Streicker Bridge, the University's new pedestrian span being installed over Washington Road.

Zoli teaches a course at Princeton titled "Design of Large-Scale Structures: Bridges." Michael Celia, chair of Princeton's Department of Civil and Environmental Engineering and the Theodora Shelton Pitney Professor of Environmental Studies, said Zoli is the perfect person to receive the fellowship. "He is a great teacher," Celia said, "and terrifically creative."

Zoli has looked hard at improving efficiency in the design of bridges and other structures. "We sometimes optimized materials to such a degree that things became difficult to build and perhaps less safe," he said. "I've focused much of my career on building structures that are safer using forms that are easy to construct and fabricate and mass-produced materials that are more accessible."

That philosophy of building with materials that are easy to come by and use will likely influence how he proceeds as a MacArthur Fellow. He may use the fellowship, he said, as an opportunity to develop new building materials, such as thin-shelled structures reinforced with tire bead wire, the kind of metal wire found in radial tires. He also might explore new ways to build synthetic rope bridges for use in remote regions, including national parks and mountainous countries such as Nepal.

"Why build steel bridges when you have to carry in these big pieces of steel?" he said. "Instead, you could put a bridge in a few backpacks. If it's light enough to get it there and strong enough for the job, then it will serve the needs of rural populations."