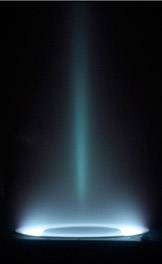 The fourth annual "Art of Science" exhibition features works submitted as part of a competition to judge the most aesthetically pleasing images produced during the course of scientific research. First place was awarded to "Xenon Plasma Accelerator" by Jerry Ross, a postdoctoral researcher at the Princeton Plasma Physical Laboratory. The photo shows a plume from a Hall thruster, which is an electric propulsion technology that uses magnetic and electric fields to ionize and accelerate propellant.

John Bracht, a postdoctoral researcher in the Department of Ecology and Evolutionary Biology, captured this image, "Midnight RNA Structure," as part of his research on RNA folding.

Watch a slideshow of images submitted for the competition.

The fourth annual "Art of Science" exhibition, featuring "found art" images made by Princeton University community members during the course of scientific research, is on view in the Friend Center and in an online gallery.

The theme of this year's exhibition is "energy," broadly defined. The 45 works featured in the exhibition were submitted for a competition this spring in which a panel of Princeton faculty and administrators judged the scientific images based on their aesthetic value. 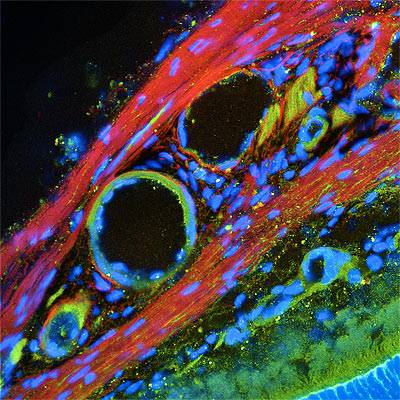 This image of a frozen section of a mouse eye, titled "Powering the Eye," shows connective tissue, blood vessels, sclera (the white part of the eye) and part of the retina. The green parts of this image are the calcium-binding protein Calretinin, which have been stained with an antibody. Cell nuclei are blue. The image was taken by graduate student Praveena Joseph-de Saram and Associate Professor Michael Berry of the Department of Molecular Biology.

The "Art of Science" organizers sought images that came directly from research in science and engineering or works by artists incorporating tools and concepts from science. Princeton undergraduates, graduate students, faculty, research staff, community affiliates and alumni submitted microscopic images, photographs taken for purposes of field research and images generated by computer simulations, among other entries.

"Since its inception in 2005, the 'Art of Science' competition has offered breathtaking pictures, surprise and a new lens for scientific imagination," said Adam Finkelstein, an associate professor of computer science and a co-organizer of the competition. "This year's exhibition comprises the strongest, most compelling imagery yet."

This year's exhibition opened May 7 with a reception and a concert by Miracles of Modern Science, an orchestral rock band composed of Princeton alumni, who performed the world premiere of its new song, "Art of Science." 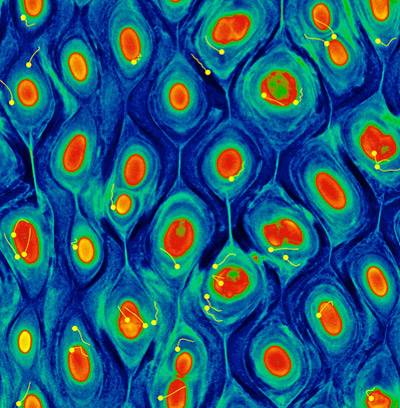 Two researchers in the Department of Astrophysical Sciences, graduate student Lorenzo Sironi and Assistant Professor Anatoly Spitkovsky, captured this image of a process related to the conversion of magnetic energy into particle energy. In this process, the magnetic field ends up confined within magnetic islands (red blobs), with high-energy particles meandering among the islands (yellow tracks). "Although this image has nothing to do with biology, it carries astonishing visual similarity with the very first burst of energy in human life," Sironi and Spitkovsky wrote of their entry, which is titled "It's Not What You Think It Is."

Among the works featured in the exhibition are the three winning entries in the competition. First place went to "Xenon Plasma Accelerator" by Jerry Ross, a postdoctoral researcher at the Princeton Plasma Physical Laboratory (PPPL). Second place was awarded to "Therapeutic Illumination" by David Nagib, a graduate student in chemistry. Third place was given to "Neutron Star Scattering off a Super Massive Black Hole" by Tim Koby, a junior majoring in physics.

Pablo Debenedetti, vice dean of the School of Engineering and Applied Science, noted when he presented the awards that "'Art of Science' is a truly interdisciplinary event." Submissions were received from more than 20 different departments across the University.

Jurors for the competition were Princeton President Shirley M. Tilghman; David Dobkin, dean of the faculty and the Phillip Y. Goldman '86 Professor in Computer Science; Paul Muldoon, chair of the Lewis Center for the Arts and the Howard G.B. Clark '21 University Professor in the Humanities; photographer Emmet Gowin, professor of visual arts in the Lewis Center; and James Steward, director of the Princeton University Art Museum.

Muldoon observed of this year's "Art of Science" judging that, "We're reminded, yet again, that art is less about the imposition of patterns on the world than an openness to the patterns the world imposes on us." 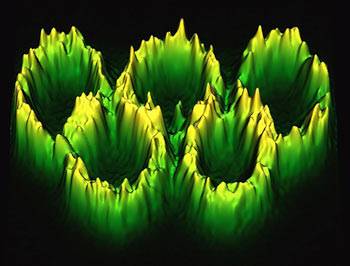 In "Nonlinear Olympic Rings," graduate student Dmitry Dylov and Assistant Professor Jason Fleischer of the Department of Electrical Engineering used nonlinear material known to alter the behavior of light in strange ways in order to extract energy from noise. An obscured image -- in this case, an image of Olympic rings -- emerged as a clear pattern. The process is akin to improving poor TV reception using the distorted, or "noisy," part of the broadcast signal.

Co-organizer Andrew Zwicker, who is the head of science education at PPPL and a lecturer in the Princeton Writing Program, said that the competition brings artists and scientists together in new and important ways.

"For a long time, science has informed art, providing new tools, new technology and new inspiration,” he said. “The interesting question raised by this competition is whether finding the beauty in a scientific image changes how that image is viewed scientifically. It may well be that the aesthetics on occasion inform the science.”

Cash prizes were given to the top three winners of the competition: $250 for first place, $154.51 for second; and $95.49 for third. These amounts are derived according to the golden ratio, a mathematical proportion that has been found in aesthetically pleasing designs, from seashells to ancient Greek temples.

The images will remain on view for a year in the Friend Center Atrium gallery, which is open weekdays from 9 a.m. to 7 p.m.

"Art of Science" 2010 was sponsored by the Andlinger Center for Energy and Environment, the Lewis Center, PPPL, the Office of the Dean for Research, the Princeton University Art Museum, the School of Engineering and Applied Science and the David A. Gardner '69 Fund in the Council of the Humanities. 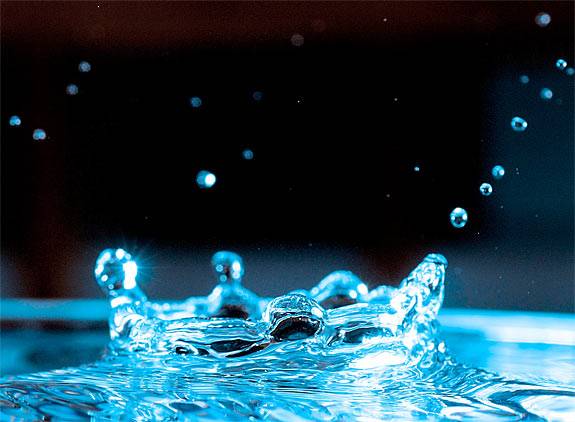 A brief examination of surface tension effects in water led to this photo, "Surface Tension of Water" by sophomore David Heinz. The image was captured just a moment too late, revealing a "crown" of water, rather than the surface tension interaction between the drop and the pool.