Princeton President Shirley M. Tilghman (right) speaks with Caren Franzini, the chief executive officer of the New Jersey Economic Development Authority, at "Celebrate Princeton Invention" on Dec. 3. The event honored more than 200 University researchers who participated in the technology transfer process in 2010 and also recognized the importance of partnerships with industry to place Princeton inventions in the public domain, where they can be developed to improve wellbeing and promote economic growth.

James Sturm The William and Edna Macaleer Professor of Engineering and Applied Science and director of the Princeton Institute for the Science and Technology of Materials Robert Austin Professor of physics and principal investigator for the Princeton Physical Sciences-Oncology Center (Photo by Denise Applewhite)Invention Deterministic lateral displacement array (a.k.a. "bump array") 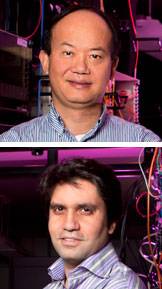 David MacMillan The A. Barton Hepburn Professor of Organic Chemistry and chair of the Department of Chemistry Invention OrgCAST, a technology for accelerating drug discovery Read more

Members of the University community, investors and industry representatives circled around the Chancellor Green Rotunda Friday, Dec. 3, to learn about Princeton inventions that could become the beneficial applications of the future. 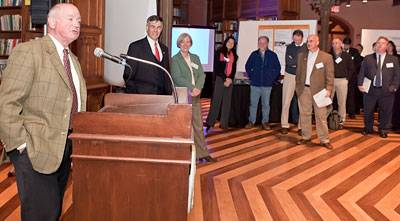 Princeton Dean for Research A. J. Stewart Smith addresses the crowd as U.S. Rep. Rush Holt (second from left) and President Tilghman (third from left) look on. In his remarks, Smith stressed the importance of innovation for national competitiveness and called for increased investment in science and technology.

On one side of the room, electrical engineer Paul Prucnal explained his wireless communications invention as "the equivalent of trying to detect a whisper in the roar of a freight train." Across the room, molecular biologist Hilary Coller discussed her recent advance -- a one-two cell-killing punch that may inform future therapies for cancer and other diseases.

Prucnal and Coller were joined by a number of their colleagues, including organic chemists, mechanical and aerospace engineers and computer scientists, to share information about their inventions at the second annual "Celebrate Princeton Invention" reception. The event honored the accomplishments and contributions of more than 200 Princeton University scientists and engineers who participated in the technology transfer process in 2010.

Lynn Loo, an associate professor of chemical and biological engineering, speaks with Ronald Ho of Google about a novel method for creating electronic switches with conductive plastics using a process similar to the one used to print newspapers.

Additionally, the celebration recognized the importance of collaboration between the University research community and industry to develop fundamental discoveries into beneficial technologies and applications. 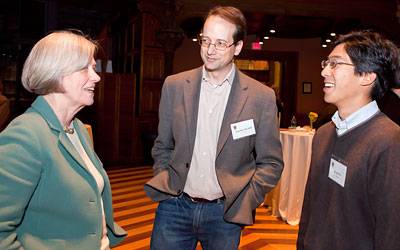 From left, President Tilghman enjoys a conversation with Jonathan Rochelle and Ronald Ho of Google, a co-supporter of the Celebrate Princeton Invention event.

"The Princeton inventors who participate in technology transfer activities, whether filing patent applications or licensing technologies to companies for development and commercialization, help fulfill the University's research mission by placing the discoveries made here into the public realm where they can have a direct benefit on people's lives," said John Ritter, the director of Princeton's Office of Technology Licensing and Intellectual Property. 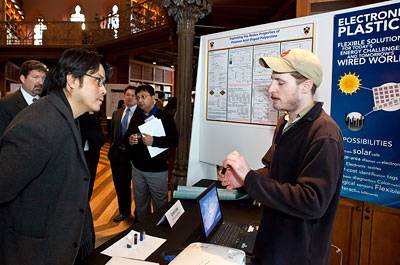 Showcasing inventions in different stages of development from a variety of disciplines, Celebrate Princeton Invention featured eight kiosks at which University researchers presented their discoveries. Ranging from conductive plastics and multimedia Web search technology, to a new technique for drug development, the featured innovations demonstrated how fundamental new knowledge is being harnessed to address some of the biggest contemporary challenges, including the energy crisis, threats to human health and rapid information access. 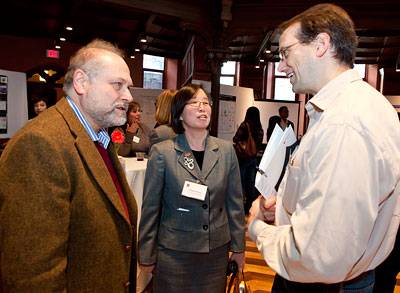 From left, Pablo Debenedetti, the vice dean of Princeton's School of Engineering and Applied Science, speaks with Associate Director of Corporate and Foundation Relations Frances Yuan and Jonathan Rochelle of Google.

The event, organized by the Office of the Dean for Research, was supported by Google and the intellectual property law firm Volpe and Koenig PC. 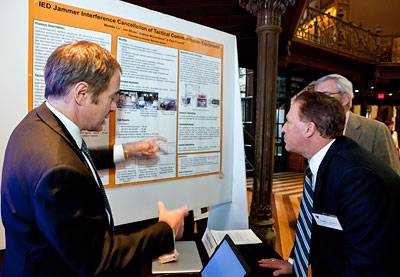 Electrical engineering professor Paul Prucnal (left) explains to Geoffrey Michael, managing director for investments at Merrill Lynch, how an optical technique can be used to address the "co-site interference problem" in wireless communications. 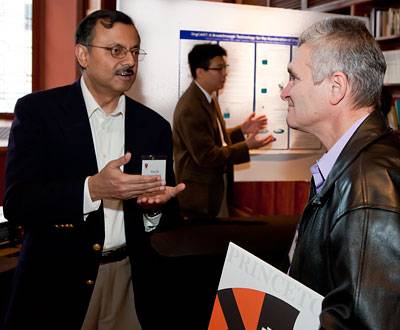 Electrical engineering professor Niraj Jha (left) talks about his technologies to improve programmable computer chips with Anthony Novembre, the associate director of the Princeton Institute for the Science and Technology of Materials. 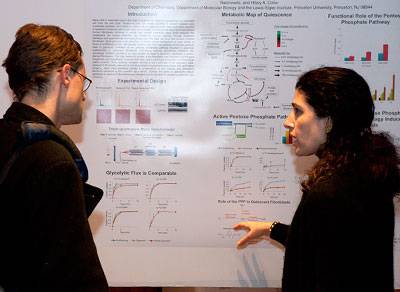 At right, Hilary Coller, an assistant professor of molecular biology, explains how inhibiting two biological pathways in quiescent fibroblast cells can induce a suicidal cell process. The work may have implications for the development of anti-cancer therapies. 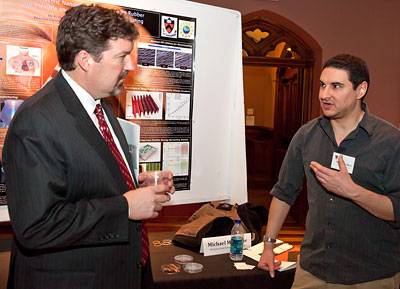 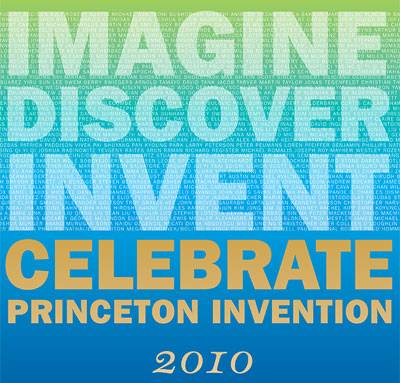