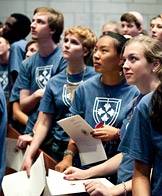 New members of the class of 2015 take in the atmosphere of the ceremony for Opening Exercises Sept. 11 in the University Chapel. Students gather in the chapel in their residential college groups to participate in the interfaith service that marks the start of each academic year. Classes begin on Thursday, Sept. 15. 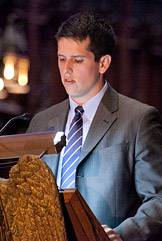 Junior Zachary Beecher gives a reading from the Bible's book of Romans in the reflective ceremony rich with tradition.


Reflecting on the opportunities created by the modern information age, President Shirley M. Tilghman told students at Opening Exercises Sunday (Sept. 11) that the instant availability of information can lead to greater insight into the human condition and the natural world.

But access to information is not enough to accelerate the creation of new ideas and the discovery of new knowledge.

"It will require the ability to organize that information so that patterns can be discerned within it; to recognize unexpected connections between disparate bodies of knowledge; to apply the tools of logic and moral reasoning in order to extract true understanding; and to muster the courage to draw conclusions and then change your mind when new facts come to light," Tilghman said in her address.

"Without a well-prepared human mind, the abundance of information at our disposal will remain a cacophony rather than a symphony," she added.

Tilghman told the gathering that the coming years would prepare the new Princeton students to be orchestra conductors of all the world's information. 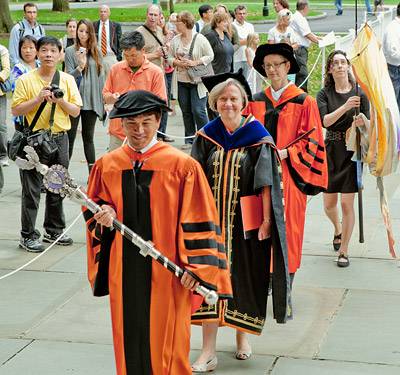 Mace bearer Jeff Nunokawa, a professor of English, is followed by President Shirley M.Tilghman as part of the procession of faculty and administrators toward the chapel.

The new students and their families -- joined by new and returning graduate students, other undergraduates, faculty and staff -- filled the University Chapel and two simulcast sites for the interfaith service that traditionally marks the start of each academic year. Classes begin on Thursday, Sept. 15.

In a procession led by the rhythm of African drummers and kite-bearers waving bright strips of cloth on long poles, members of the class of 2015 entered the chapel with other students in their respective residential colleges. They were preceded by faculty members and administrators in academic regalia, and each group was led by a student carrying a colorful banner bearing the college shield.

In addition to Tilghman's address, highlights of the event included music, prayers and readings from various religious and philosophical traditions. Undergraduate students also were recognized for their academic achievements during the previous year. 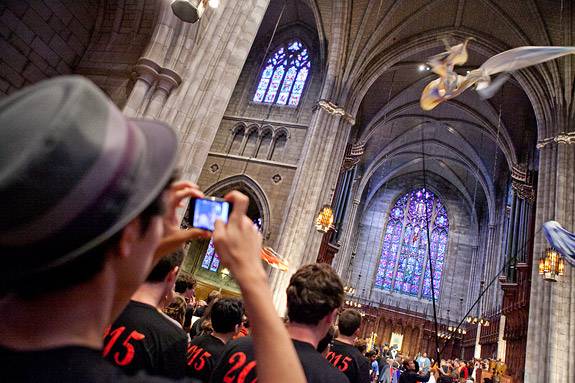 Students fill the chapel behind flying kites on long poles that lead the procession.

The ceremony began with a welcome from Tilghman to the new and returning members of the University community. She noted that the 1,300 members of the class of 2015 come to Princeton from 47 states, plus Washington, D.C., and 46 countries, and that both the new undergraduates and the 636 new graduate students hail from six of the seven continents -- "proof positive that Princeton is truly an international university." 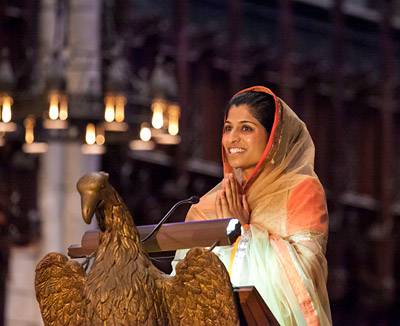 Shikha Uberoi, a member of the class of 2013, offers a reading from the Hindu Mool Mantar, one of the readings from students from various religious and philosophical traditions.

In her exhortation to the students to help effect forward progress by taking advantage of technological innovations, Tilghman acknowledged that dire predictions on this subject have spanned history.

Socrates worried that the invention of writing would damage memory retention, Swiss scientist Conrad Gessner in 1565 warned after the invention of the printing press that books would be confusing to the mind, and an 1883 article in a New York medical journal predicted that public education would exhaust children's brains and nervous systems.

"While I don't subscribe to the view that information per se is dangerous to either the individual or to society, I am concerned that the ready availability of so much information is creating the illusion that we know more than we do, and is confusing facts with ideas and interpretation," Tilghman said. 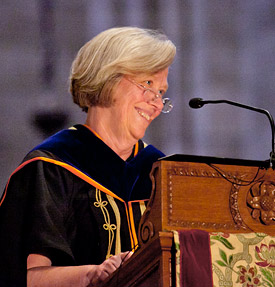 President Tilghman welcomes the freshmen, and in her address exhorts them to embrace ideas, not simply information.

She cited as an example this summer's debate in the U.S. Congress about raising the debt ceiling, where politicians on both sides of the aisle began with a number of facts that were not in dispute, namely the size of the national deficit, the cost of servicing the interest and the portion of the budget available for discretionary spending.

It was the beliefs and assumptions of each side related to government's role in people's lives, as well as each legislator's experiences, that resulted in members of Congress reaching opposite conclusions, she said.

"In an ideal society, if such a thing were possible, engaged citizens would collectively reach important decisions in good faith by taking into consideration ideas from political theory, a discipline that lies between political science and philosophy and that for millennia has been contemplating the purpose of government," Tilghman said.

Individuals do not see the world in the same way, but it is incumbent upon members of society to approach challenging issues by making use of intellectual tools, along with raw information. 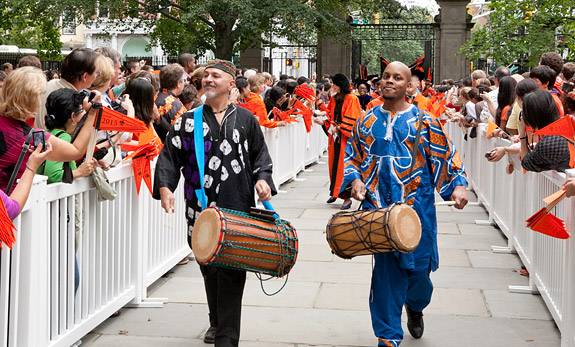 African drums drive the beat during the pre-rade, when freshmen officially enter the campus to start their undergraduate careers.

"Over the next four years, your Princeton education will stretch your minds in ways that you can only begin to imagine now, preparing you to be informed and effective citizens of this and all other countries -- citizens who are able to draw understanding from and discern the most fruitful path amid the immense sea of facts surrounding them," Tilghman told students.

She explained that Princeton teaches many ways to approach a problem: Through scientific reasoning and philosophy students will decipher conundrums; aesthetic sensibility will be honed through the study of art; foreign languages will provide windows into other cultures; and courses in epistemology will help students distinguish facts from knowledge and truth. 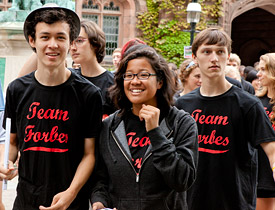 "If you learn these lessons well, not only will you thrive in the information age, you will also be a credit to your country and to your alma mater, like so many Princetonians before you," Tilghman said.

After the ceremony, the freshmen were cheered and greeted by other Princetonians as they participated in a "pre-rade" from the chapel through FitzRandolph Gates, where they officially entered the campus to start their undergraduate experience. 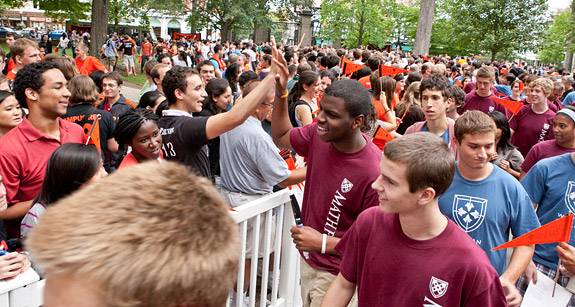 High-spirits and high-fives greet freshmen as they enter campus, welcomed by other Princetonians.