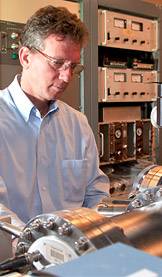 Princeton Professor of Chemical and Biological Engineering Bruce Koel is working with scientists at the Princeton Plasma Physics Lab to apply the science of surface chemistry to solving one of the biggest obstacles facing fusion: how to keep the fusion reaction burning for long periods. Note: The photos in this story show researchers with equipment that is not in use at the time of photography.

In the lab down the hall from Bruce Koel's new office, the temperature is about to go up over 11 million degrees Centigrade in a hot tub-sized chamber that cradles the energy of a burning star.

The chamber is housed at the U. S. Department of Energy's Princeton Plasma Physics Lab (PPPL), where scientists are exploring ways to harness the fusion of atoms, the same process that fuels the sun and other stars, to provide safe, clean and abundant energy for homes and businesses.

Koel, a professor of chemical and biological engineering at Princeton University, is joining with PPPL scientists to tackle the challenge of capturing the energy of the sun on Earth. Appointed to the Princeton faculty last year, Koel's expertise is in surface chemistry. His mission at PPPL is to apply the science of surfaces to solving one of the biggest obstacles facing fusion: how to keep the fusion reaction burning for long periods.

The fusing together of atoms releases vast amounts of energy, but the process can take place only at extremely high temperatures. For fusion to be the basis of the power plant of the future, scientists need to find ways to keep the process from cooling.

Amazingly, a thin metal lining, just the width of a human hair, on the inner wall of the reactor could help prevent this cooling. Koel is collaborating with PPPL scientists to study materials for this lining. The most promising lining is lithium, the lightest metal on Earth and the only metal that floats on water. 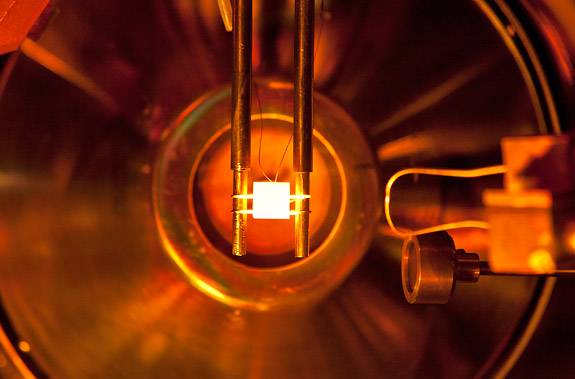 To study the interactions of lithium under conditions similar to what might be found in a fusion reactor, lithium on a sample of TZM molybdenum, which is an alloy of molybdenum, titanium, zirconium and carbon known for its high strength and temperature properties, is heated inside an ultrahigh vacuum chamber that is outfitted with an array of electron and ion spectrometers.

Maintaining temperatures in the millions of degrees is essential because fusion occurs when certain forms, or isotopes, of hydrogen atoms become so heated that their positively charged nuclei separate from their negatively charged electrons to form a charged cloud called a plasma. These hydrogen nuclei zip around and smash into each other at high speeds, resulting in fusion of the nuclei and the release of energy.

This plasma is so hot that only a magnetic force field, housed inside a cylindrical stainless steel and copper chamber, can contain it. But stray particles constantly escape from the charged cloud and hit the chamber wall, then bounce back into the plasma. The cycling of cold particles back into the scorching gas cools the plasma, and causes it to become turbulent and unstable.

Although heat-resistant carbon tiles line the inside of the chamber, they do not stop particles from cycling in and out of the plasma, which is confined in the middle of the vessel by the magnetic field and does not directly contact the chamber walls. "No matter how hot you make the middle, the walls are cold," said Richard Majeski, a PPPL principal research physicist and lecturer with the rank of professor in astrophysical sciences. "It is sort of like bad insulation in a house."

A lithium lining on the inside of the chamber, however, can act like a sponge, soaking up stray particles that flee the fusion reaction. 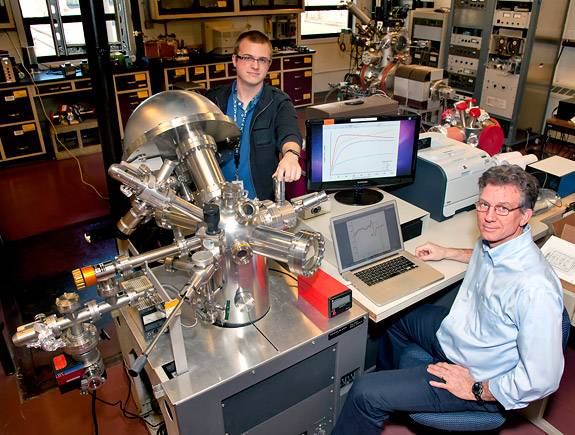 Koel (right) and mechanical and aerospace engineering graduate student Ryan Sullenberger (left) use X-rays to blast electrons from the surface of a sample and measure their energies in this device, an X-ray photoelectron spectrometer. This information can reveal what happens to the lithium during fusion and help the researchers find ways to improve lithium liners in fusion reactor experiments.

Known for its use in batteries and psychiatric drugs, lithium has unique properties that make it ideal for the task of keeping the plasma from cooling down. One of these properties is that it eagerly links up with other atoms. Lithium grabs renegade particles, preventing them from rebounding into the plasma.

Previous studies with lithium have shown that the metal can extend the plasma lifetime significantly, but to really boost the efficiency, researchers need to learn more how it behaves. "We have the basic knowledge but exactly what is happening on the surface is not so clear," said PPPL principal research physicist Charles Skinner. "This is where Koel comes in."

Adding to this complexity, the particles that barrage the lithium surface include not only the hydrogen nuclei ejected from the plasma, but also neutral particles, called neutrons, formed during the fusion reaction. Further, the extreme heat can blister the inner wall of the chamber, resulting in a surface that is buckled, coarse and littered with lithium compounds.

To explore lithium and other inner wall surfaces, Koel established a new materials characterization lab at PPPL dedicated to surface analysis. The lab now spans two rooms and includes a total of five surface analysis instruments. And this summer he will expand his group at PPPL to include a new postdoctoral researcher and an undergraduate researcher.

"Surface chemists have learned a lot over the past 20 years about lithium, but most of the studies were done with pure lithium," Koel said. "We are moving into new territory by studying how plasma particles react with not just pure lithium but with all the other compounds it makes."

With his equipment, Koel and his team will be examining metallic lithium and lithium compounds and then working their way up to lithium liquid alloys. "Even in the vacuum conditions inside a fusion experimental chamber," said Koel, "molecules of water and air are present and collide to form compounds that completely cover the surface of the walls. Every gas molecule that collides with the wall will make a lithium compound."

The researchers will explore lithium's performance as a lining under plasma conditions in the Lithium Tokamak Experiment (LTX), a relatively small reactor nestled among offices on the second floor of one of PPPL's lab buildings. Led by Majeski with co-investigators Robert Kaita and Leonid Zakharov, both principal research physicists, and Thomas Kozub, an engineering and scientific staff member, the LTX is a smaller version of the lab's main experimental device, the National Spherical Torus Experiment, or NSTX.

Koel plans to study samples collected from the inner walls of the LTX and NSTX to see how lithium performs when surrounding a high-temperature plasma. In a typical experiment, researchers will place several lithium-coated wafers on the inner wall of the reactor vessel, fire up the LTX to produce plasmas, then shut it down and collect the wafers to be sent to Koel for analysis. Researchers are designing a special cart — complete with its own vacuum pump — that could be used to rush the samples down the hall from the LTX reactor to Koel's lab. The challenge is to keep the samples isolated from air and under vacuum — the slightest trace of air or water vapor will ruin the experiment.

Using surface analysis equipment, Koel and his team, consisting of Koel and mechanical and aerospace engineering graduate student Ryan Sullenberger and chemistry graduate student Steven Wulfsberg, will study what happened to the top layer of atoms on the wafers. The equipment includes a machine that uses X-rays to blast electrons from the surface of a sample and catches them in a trap that looks like an upside-down soup bowl. By measuring the energies of these electrons, the device, called an X-ray photoelectron spectrometer, can reveal what happened to the lithium during plasma exposure to see whether it combined with hydrogen nuclei, formed lithium hydroxide or made other products.

"Koel's experiments are a crucial addition to our understanding of how to design the fusion reactor's inner wall," Kaita said. "In the past, we just tried different materials as linings in our fusion experiments, and some worked better than others. We want to get to the point where we have an understanding of the complex physics and chemistry at the surface of the inner wall of the reactor."

If the experiments are successful, the plasma fusion reactor of the future could sport a thin liquid lithium wall. But because lithium is so light, the molten metal would stick to the surface rather than running down the walls. One concept for a future reactor involves constantly replenishing the liquid lithium wall using nozzles to emit a broad, uniform sheet of liquid, similar to a decorative "wall of water" fountain.

Using lithium, physicists at PPPL hope to increase the efficiency of fusion reactors, unleashing greater amounts of energy from smaller-sized plasmas. With current designs, plasma chambers must be massive if the fusion reaction is to release more energy than it consumes for heating and confining the plasma. A prototype fusion chamber known as ITER, which is being built in France to demonstrate that fusion is a viable energy source for the future, will stand three stories high.

Scientists hope that lithium, or another coating like it, could improve the heat containment enough that a relatively small plasma vessel, similar in design to the one on the second floor at PPPL, could generate energy more efficiently. "The hope is that with lithium or another inner wall coating," said Majeski, "it will be possible to make a fusion reactor with longer running times and lower cost in a way that would ease the transition to commercial power use."

Koel's work at PPPL is funded by a PPPL Laboratory Directed Research and Development grant.

Princeton University has managed PPPL since its origins in 1951, when Professor Lyman Spitzer, a founder of the field of plasma physics, initiated the study of fusion at the University. The facility, which was officially named the Princeton Plasma Physics Laboratory in 1961, is one of 10 national science laboratories funded by DOE's Office of Science.