Princeton University officials have submitted plans to the Princeton Borough Zoning Board of Adjustment for proposed renovations to 20 Washington Road. The academic building is slated to become the home of the Department of Economics, several international offices and the Princeton Institute for International and Regional Studies (PIIRS).

The building, built in 1929 with several additions over the years, contains large laboratory classrooms, offices and mechanical spaces. It housed the Department of Chemistry until the new Frick Chemistry Laboratory farther south on Washington Road opened in 2010.

If approvals and construction proceed as planned, the building will be completed in fall 2016, said William Zahn, senior project manager in the Office of Design and Construction. The structure's interior will be renovated extensively, while the historic character of the exterior of the building and of some primary interior spaces, such as the entry and the second-floor library, will be preserved.

The move is designed to consolidate some academic and administrative areas that are spread across the University, said Paul LaMarche, vice provost for space programming and planning. Currently, faculty members in the economics department have offices in Fisher, Robertson, Bendheim and Wallace halls, as well Firestone Library and the Bendheim Center for Finance.

"The renovations to this very large building enable us to realize the University's goal of having all of Princeton's economists together in one place," LaMarche said. "Consolidating the department into a single location will facilitate collaboration and make it easier to sustain a vibrant and collegial intellectual community."

The building at 20 Washington Road is being renovated for use by the economics department, international initiatives offices and the Princeton Institute for International and Regional Studies. It previously housed the chemistry department. (Photo by Denise Applewhite)

"It's an opportunity to bring groups together, and provides for more of a 'one-stop shopping' experience for international programs," LaMarche said.

The Toronto-based firm Kuwabara Payne McKenna Blumberg Architects was selected to design the project. Besides new classroom, office and meeting space, the building will feature communal spaces, such as two atriums, Zahn said. One atrium will be located just beyond the Washington Road entrance of the building. Another atrium, on the south side of the building, will enclose the existing stone façade courtyard and will connect to Scudder Plaza and the other social science buildings in the neighborhood — Robertson, Corwin, Wallace, Fisher and Bendheim halls.

Other interior changes will include replacing the systems for heating, ventilation and air conditioning; electrical; plumbing; and fire protection. Accessibility will be improved, elevators will be replaced, and mechanical spaces in the basement, on the ground floor and on the roof will be removed.

On the exterior, the two-story connection to Hoyt Laboratory will be eliminated, the loading dock and the emergency generator will be moved to the other side of the lab, and the precast concrete on the east side of 20 Washington Road will be removed, exposing the stone façade underneath. 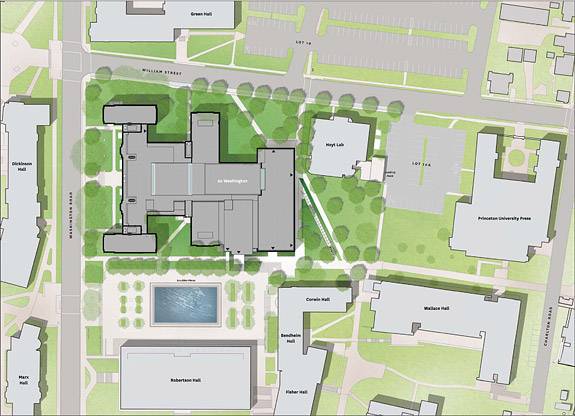 The new structure will have several sustainability features, including landscape-based stormwater management strategies; exterior shading devices; building materials that are regionally sourced or low-volatile organic compound materials; reused materials, such as historical woodwork; low-flow water fixtures; and a mechanism that shuts off a room's air conditioning when a window is opened.

Hoyt Lab, which was previously used by the chemistry department, is being repurposed as lab space for the Department of Chemical and Biological Engineering. When 20 Washington Road reopens, the buildings or spaces vacated by its new tenants will be used by other departments in nearby spaces that need to expand.