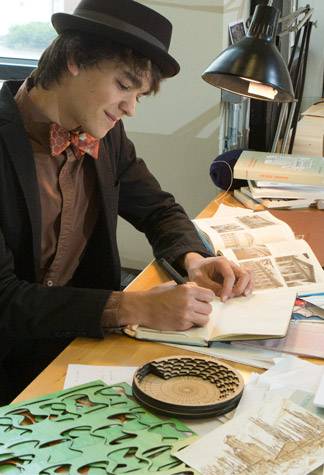 Misha Semenov, the valedictorian of Princeton University's Class of 2015, is pursuing a concentration in architecture and certificates in urban studies and translation and intercultural communication. He will deliver the valedictory address at the University's Commencement ceremony Tuesday, June 2. After graduation, Semenov will enter the dual master's program in architecture and environmental management at the Yale School of Architecture and the Yale School of Forestry and Environmental Studies.

His first full story, written when he was 6 years old, was titled "How Penguins Live."

As a young child, Misha Semenov would come home from school and, met by his grandfather, ride his bike down the steep hills of San Francisco to his grandparents' apartment. Cradled in the aroma of Russian dinners being cooked by his grandmother, he would write stories about animal characters, including elaborate illustrations of the homes and imaginary cities in which they lived.

Today, the Princeton senior still draws cityscapes and has found a way to marry his two passions — architecture and the environment — while rising to the top of his class. An architecture major who is also completing certificates in urban studies and translation and intercultural communication, Semenov is the valedictorian of the Class of 2015. He will deliver an address at the University's Commencement ceremony on June 2.

"I can't live without the natural world," said Semenov, who steps off the Princeton campus to immerse himself in nature with a hike, bike ride or camping trip at least every two weeks, a habit he learned from his biologist parents. He calls his hometown a "bubble of environmentalism."

Arriving on campus from San Francisco University High School, Semenov found that his love of nature could infuse his research in architecture. "At Princeton, I've learned that you can use architecture as a tool to encourage a different relationship with nature," said Semenov, who serves on the School of Architecture Student Advisory Board. "Architecture is always complicit in larger sociopolitical and ecological issues, but it can also be used as a tool for addressing them." 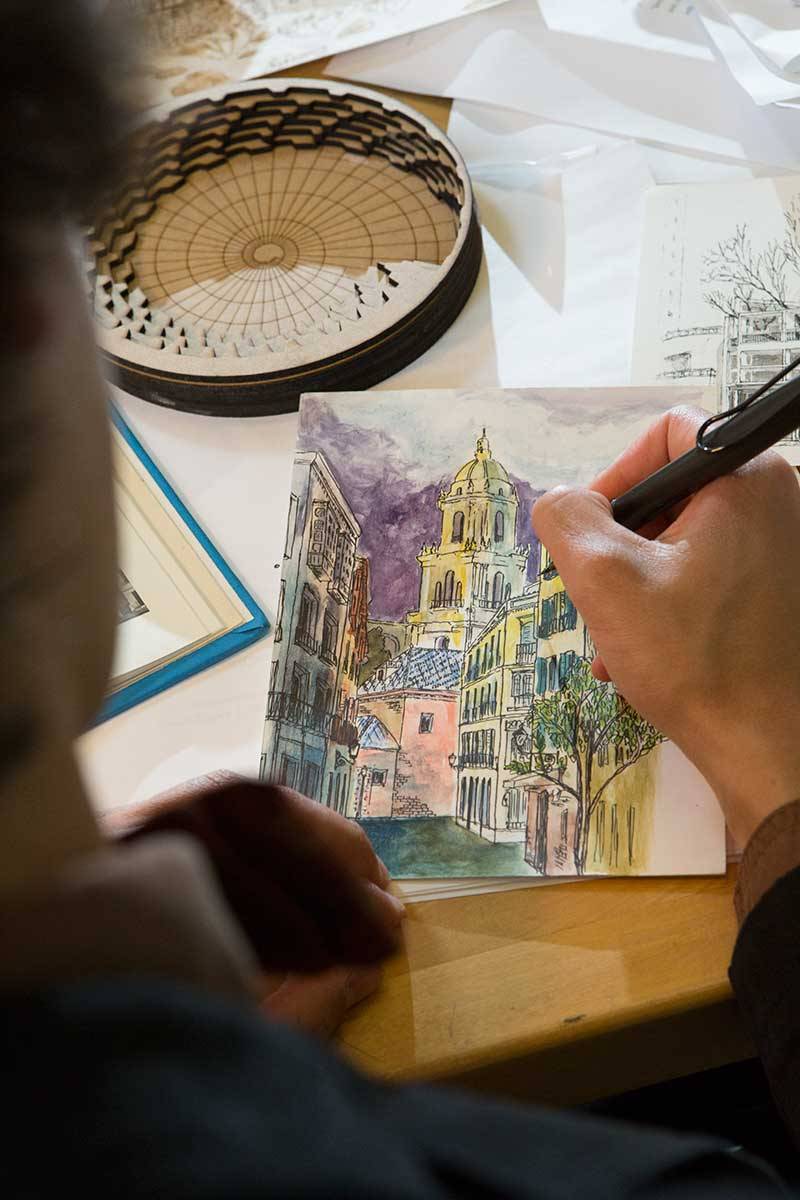 Semenov puts the finishing touches on a pen and watercolor sketch of the Málaga Cathedral, which he visited while on tour with the Chapel Choir in Spain this spring. In the background is his model of a detail of the Serpentine Pavilion designed by artist Olafur Eliasson and architect Kjetil Thorsen, built for his junior studio. (Photo by Denise Applewhite, Office of Communications)

"Misha has a deep understanding of architecture and its history, but he also takes a broad view that locates buildings and cities in a wider social and cultural context," said Stanley Allen, acting dean of the architecture school and the George Dutton '27 Professor of Architecture, who served as Semenov's senior thesis adviser. "I expect him to emerge in the not too distant future as a major figure in the field."

Allen, who also is director of the Center for Architecture, Urbanism and Infrastructure, called Semenov's thesis "an extraordinary piece of work." Titled "Playing by the Rules: Examining the Interactions of Rules with Built Form in Five Seminal American Housing Projects," it examines housing projects designed to accommodate residents' expansions and modifications, analyzing how a more flexible, adaptable rule-based architecture can help fulfill larger social goals. During the summer after junior year, Semenov visited Lima, Peru, and Santiago, Chile, to research public housing projects and how buildings could be expanded as families gain resources to build more rooms or stories.

Alison Isenberg, professor of history and co-director of the Princeton-Mellon Initiative in Architecture, Urbanism and the Humanities, also served as an adviser on Semenov's thesis. Calling Semenov an extraordinary scholar, she said, after his thesis defense: "I think it is inspiring and helpful for other students to have a concrete decription of what makes exceptional work in a field, so that it seems within reach. I would single out Misha's passion for immersing in primary sources and then building his analysis up from the unique evidence he assembled, and his brilliance in generating creative — and answerable — questions through a combination of hard work, constant revision and historical imagination."

In a letter supporting Semenov as valedictorian, Isenberg called him "the best undergraduate student I have taught in my 20-year career." She added that in her class "Cities and Suburbs in American History," he "took the initiative to rearrange the chairs in a circle every class meeting, to quietly ensure conversations rather than rows facing the professor." 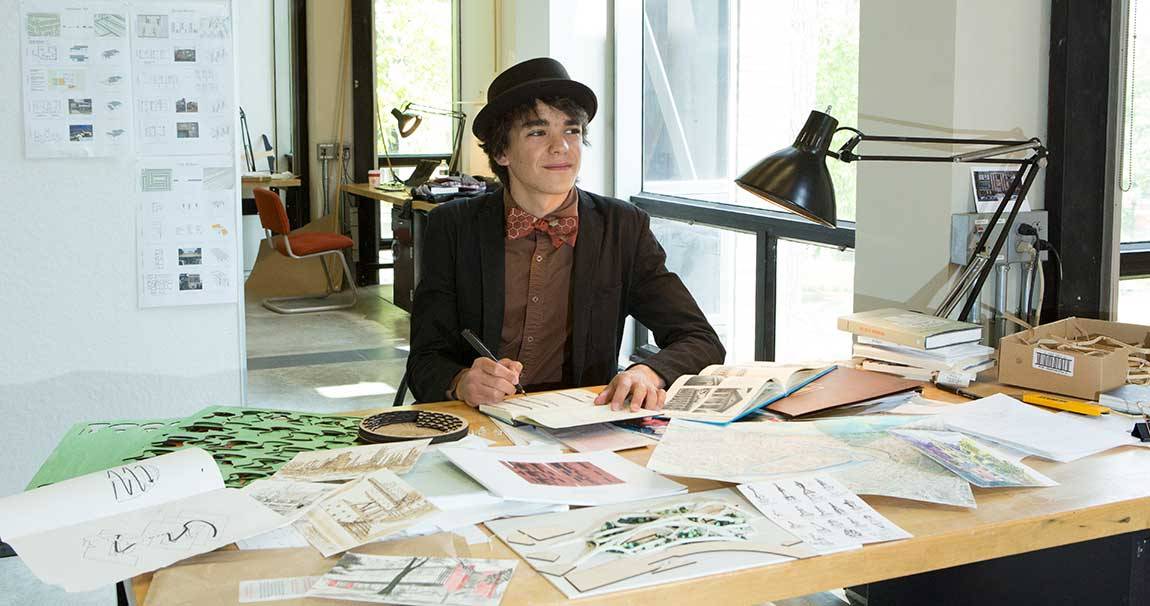 In the sunny studio space of the School of Architecture, Semenov works on a drawing, surrounded by some of the models and sketches that make up his portfolio. (Photo by Denise Applewhite, Office of Communications)

Semenov said his most memorable academic experience as a Princeton student took place in Brazil this fall, in an advanced design studio taught by Mario Gandelsonas, the Class of 1913 Lecturer in Architecture and professor of architecture. Initially charged with designing a waterpark in a favela near a reservoir in São Paulo, Semenov and his class partner were drawn instead to examining the huge economic disparities between rich and poor and how the project could have a social role.

"It was more of a challenge [than the original assignment], but instead we conducted a research project focused on how architecture can reveal patterns of segregation in the city," Semenov said. "It illustrated how architecture should always be in dialogue with social issues — which is one of my biggest takeaways from my Princeton career."

In the Princeton in Beijing program in summer 2012, Semenov observed firsthand the effects of urban growth at monumental speed. "In China, they're building dozens of megacities every year, and that's going to determine the fate of the planet and the Chinese environment for centuries to come," he said. "The way the rest of the world develops cities is fundamentally important. It's huge. That's why I think it's such an exciting field."

For two summers, Semenov worked for Duany Plater-Zyberk & Company (DPZ), an urban planning and architecture firm in Miami founded by Princeton alumni Andrés Duany and Elizabeth Plater-Zyberk. One of his biggest lessons was watching the partners communicate with developers. "You need not only a vision but to be able to spark that fire in someone who has the ability to get it built," he said.

During his first summer at DPZ when a friend took him to a hat shop, Semenov acquired his penchant for jaunty hats. "Hats are great for sketching because they block the sun," he said. The next summer, on "Wear your tie to work day," Semenov wore the only tie he owned — a black bow tie. After learning that architects like Le Corbusier and Gropius wore bow ties because regular ties would get ink on them from the drawings they were making, Semenov expanded his collection — he now has eight, all with animals.

"What we loved about Misha was his range of enthusiasms — from lugubrious discussions of architectural theory, to sudden outbursts of poetry declaimed in Russian, to the deep commitment to socially just housing in Latin America that became his Princeton thesis," Duany said. 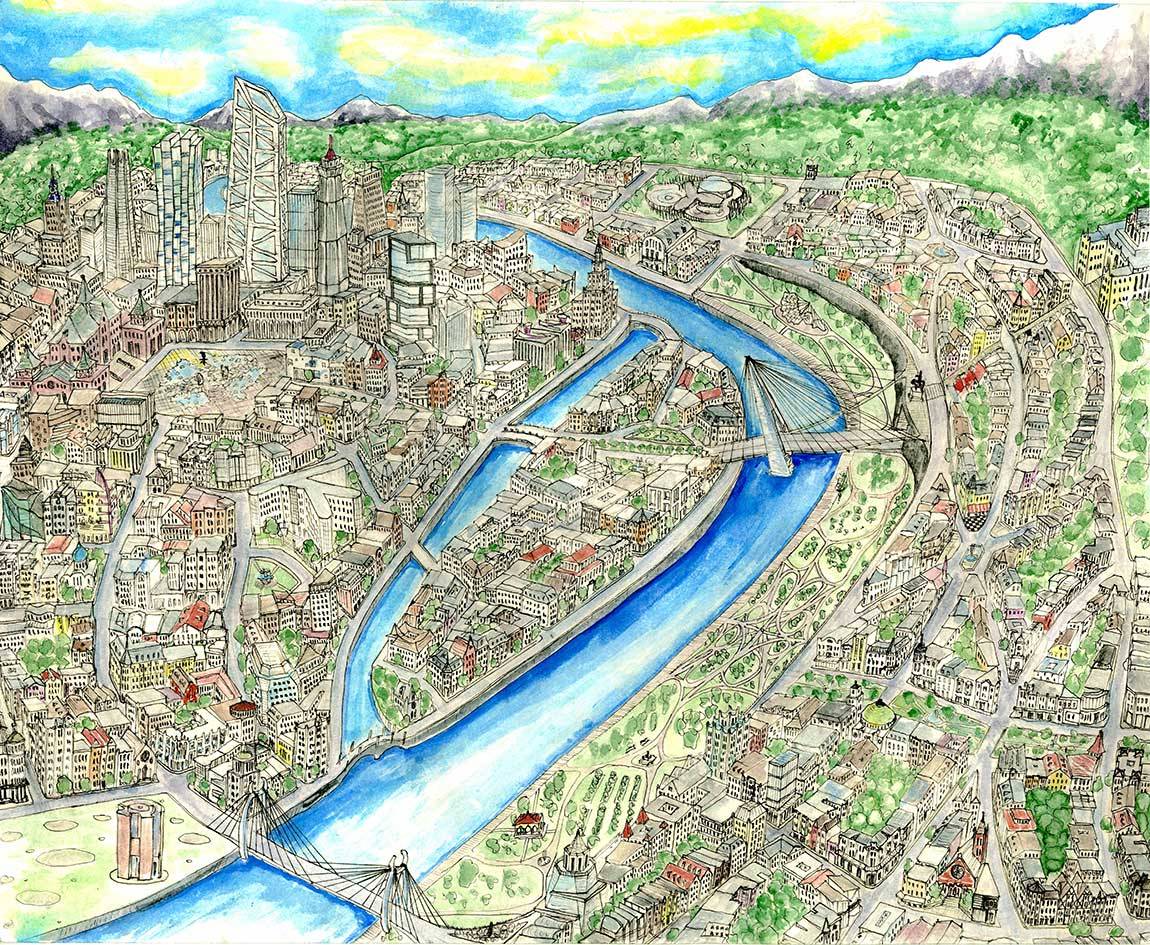 Semenov has been drawing fantasy cityscapes since childhood. This recent cityscape — created for a portfolio project to document his work at Princeton — includes buildings, pavilions, parks, bridges and other designs that represent 10 class projects and independent work. (Artwork by Misha Semenov, Class of 2015)

Fostering a love of language and literature

Semenov, whose first language is Russian, also brought academic rigor to his work in the Program in Translation and Intercultural Communication. A chance meeting in a core course in the program, "Thinking Translation" taught by Sandra Bermann, the Cotsen Professor of the Humanities and professor of comparative literature, became on object lesson in what Semenov calls the "seemingly trivial but remarkable" connections Princeton creates for its students.

One of the guest speakers was Lynn Visson, an interpreter at the United Nations. For his final research project in the class (which later inspired his certificate thesis), Semenov looked at 12 translations into English of Tolstoy's "Anna Karenina" and "War and Peace," comparing the use and translation of the informal/formal distinction tu/vous that exists in many languages, but not English. Bermann suggested he consult with Visson, an expert in Russian-to-English translation.

Semenov said Visson "ended up being the godmother to the piece" and helped him get it published in Mosty, a Moscow-based journal of translation, in October 2014.

"Misha is brilliant and imaginative," Bermann said. "With Visson's advice, his own bold thinking and determined follow-through, he went on to write a paper that was more like a graduate essay than a final paper for a 200-level course."

With funding from the Office of Undergraduate Research, Semenov was also able to present his work at a translation conference at Indiana University-Bloomington last spring, an experience he said deepened his appreciation for the resources Princeton has offered him. "What other school would give me the opportunity to present a paper I had written for a class among all these literary scholars?"

Semenov has also been involved in the Princeton University Language Project as a translation speaker series coordinator and translator to and from Russian and Spanish.

Creativity outside the classroom

Semenov's artistic spirit and commitment to the environment carry over into his extracurricular activities. A member of the Chapel Choir, Semenov likes to quote Director of Chapel Music Penna Rose's favorite saying — "When you sing, you leave a part of you in the stones" — which dovetails with his love of architecture. During the choir tours Semenov went on, he said they also left sounds on the stones of such venerable buildings as the Basilica di San Marco in Venice and the Basilica of St. Anthony in Padua. 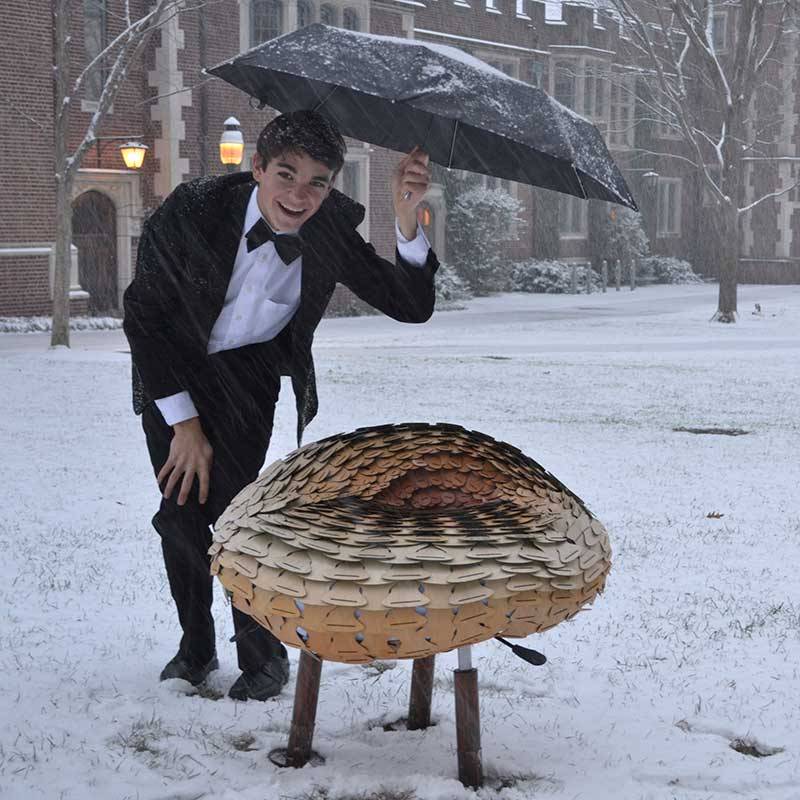 Semenov celebrates the completion of "All Scaled Up," a chair for his junior design studio taught by Professor of Architecture Jesse Reiser. The chair is made up of 300 unique, computer-generated scales laser cut from birch plywood and sewn on by hand. (Photo by Kassandra Leiva, Class of 2015)

He is also a member of the  Edwards Collective, a group of students interested in the creative arts and humanities who live together in Edwards Hall in Mathey College. "It's so wonderful because even though each of us has a different interest and a different specialty, we are constantly creating something new together: new art, new knowledge, new conversation," Semenov said.

He has been involved in Theatre Intime, the Princeton Opera Company, the Nassau Literary Review and the Princeton Birding Club. His nature photography; fantasy cityscape drawings; and original poetry and short fiction in Russian, Spanish and English can be seen on his website, mishasemenov.com.

Semenov will leave no carbon footprint on the Princeton campus. He has engaged with campus sustainability initiatives as chair of the Greening Dining Committee and member of the GreenLeaders forum. He also helped get a new course approved, in which students will be working on the University's Sustainability Plan.

"I believe we really did make a difference in Princeton's environmental footprint and, hopefully, in the campus culture of sustainability for years to come," Semenov said.