A mysterious vial of mud taken from a New Jersey swamp may end up offering a solution to several obstinate forms of water pollution.

A few years ago, researchers in Peter Jaffe's laboratory noticed that ammonium, a pollutant that comes from sources including fertilizer runoff, was inexplicably disappearing from a soil sample taken from the Assunpink wetland in central New Jersey. Jaffe, a professor of civil and environmental engineering at Princeton University, suspected that an unidentified type of bacterium was breaking down the ammonium in the soil. What was especially interesting was the bacteria seemed to be converting the ammonium in the absence of oxygen — a behavior with potentially important implications for sewage treatment and other processes.

Most sewer plants that discharge into oceans or rivers already use bacteria to remove ammonium in waste, but doing so requires churning lots of air into the sludge to feed the bacteria oxygen. That process typically accounts for about half of a sewer plant's energy bill, Jaffe said.

"The goal was to see if we could use the bacterium as a novel way to treat ammonium without the need to supply oxygen," Jaffe said. 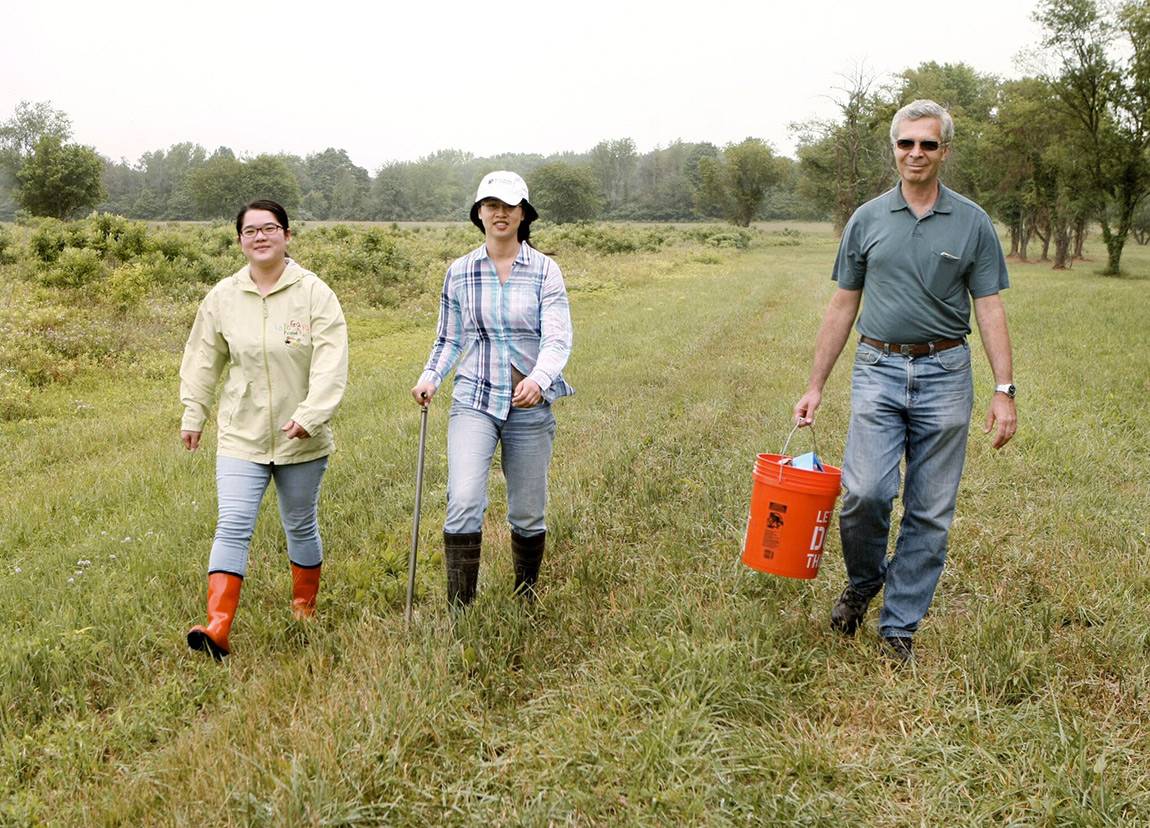 Peter Jaffe, a professor of civil and environmental engineering, received support from the University's Project X Fund to explore his theory that a type of bacteria could clean contaminated groundwater. Jaffe (right) along with associate research scholar Shan Huang (left) and Chen Chen (center), a visiting research collaborator from the South China Institute of Environmental Sciences, collected samples this summer from the Assunpink Wildlife Management Center in central New Jersey. (Photos by Frank Wojciechowski for the Office of Engineering Communications)

The researchers identified the bacterium responsible for the decreasing ammonium levels as Acidimicrobiaceae bacterium A6, and have since found it to be a surprisingly versatile bug. Jaffe said the organism uses oxidized iron instead of oxygen to eliminate ammonium. First it converts the ammonium into nitrite and then other common bacteria convert the nitrite to harmless nitrogen gas. It seemed like an ideal solution to breaking down ammonium, but when the researchers built a test reactor, they found a problem. In order to consume the ammonium, the bacteria need a substantial supply of iron and rapid removal of the iron byproducts produced during the reaction.

"The organism is very iron-hungry," Jaffe said. "It consumes so much iron that it is not economically feasible to operate a reactor for ammonium removal."

The researchers knew, however, that the role the iron really plays is just to receive electrons that were freed when ammonium was converted to nitrite, in what's known as an oxidation reaction. As a substitute, the researchers are testing a method to introduce a low electrical current into the reactor liquid (a device they call "microbial electrolysis cells") to move the electrons.

The current "provides the energy that is otherwise created by the reaction with the iron," Jaffe said. He is collaborating with Daniel Steingart, an assistant professor of mechanical and aerospace engineeringand the Andlinger Center for Energy and the Environment, to optimize these electrolysis cells. Their work is funded by the Andlinger Center and the Princeton Environmental Institute. 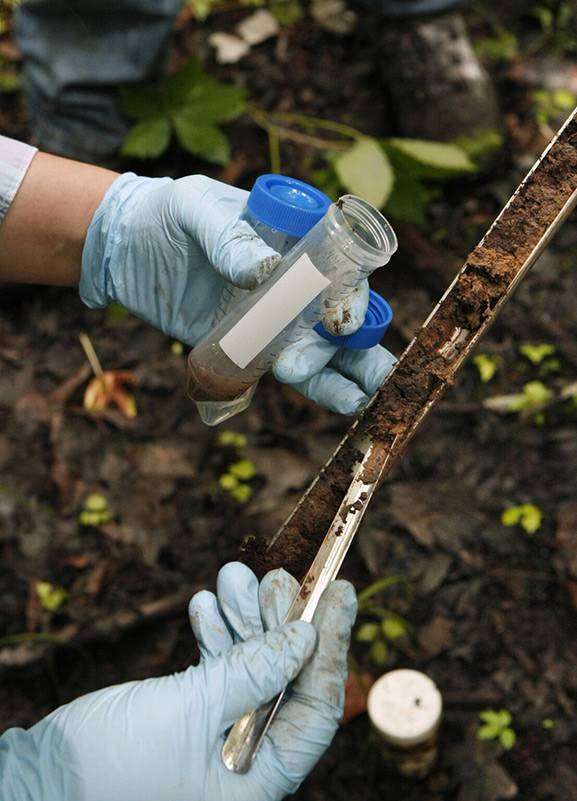 The bacteria remove contaminants from water without the need for oxygen, potentially reducing costs for sewage treatment plants, which often need to mix oxygen into wastewater for cleaning.

Jaffe's team is also working with the Chinese environmental ministry to try to develop a prototype reactor to eliminate ammonium. In November, the researchers are scheduled to travel to a lab in Guangdong to plan tests of their proposed methods.

Chen Chen, a Chinese government researcher who is working with Jaffe's team, said one long-term goal is to reduce eutrophication — massive growth of algae and other plants triggered by nitrogen compounds from sewage and agricultural runoff. Eutrophication can cause problems for both wildlife and water supplies.

"The Chinese government has spent large amounts of money for water pollution control and treatment to reduce eutrophication," Chen said. She said the government is interested in developing the bacterial technology to reduce ammonium and certain heavy metals in sewage and to reduce similar pollutants in runoff.

Chad Vecitis, an associate professor of environmental engineering at Harvard University, not involved in the Princeton project, said that eutrophication can pose a difficult problem for certain waterways.

"It can completely change the aquatic environment," he said. "For example, it is a big issue in the Gulf of Mexico because of runoff coming down the Mississippi River."

Vecitis, whose team is working with the government of Singapore on a water recycling project, said that some of the most promising research avenues involve the use of microorganisms that remove nitrogen. But he said that finding the right environmental factors and effective methods are critical to the approach.

"Growing the microorganisms and keeping them happy is not always easy," he said.

Jaffe said one positive early sign is that the A6 bacteria appear to exist in a variety of locations. After obtaining permission from the U.S. Department of Agriculture, the research team imported soil samples from around the United States and from sites in China and found that the bacteria is present at many locations that have the right environmental conditions, showing that they can be active under very different climatic conditions. 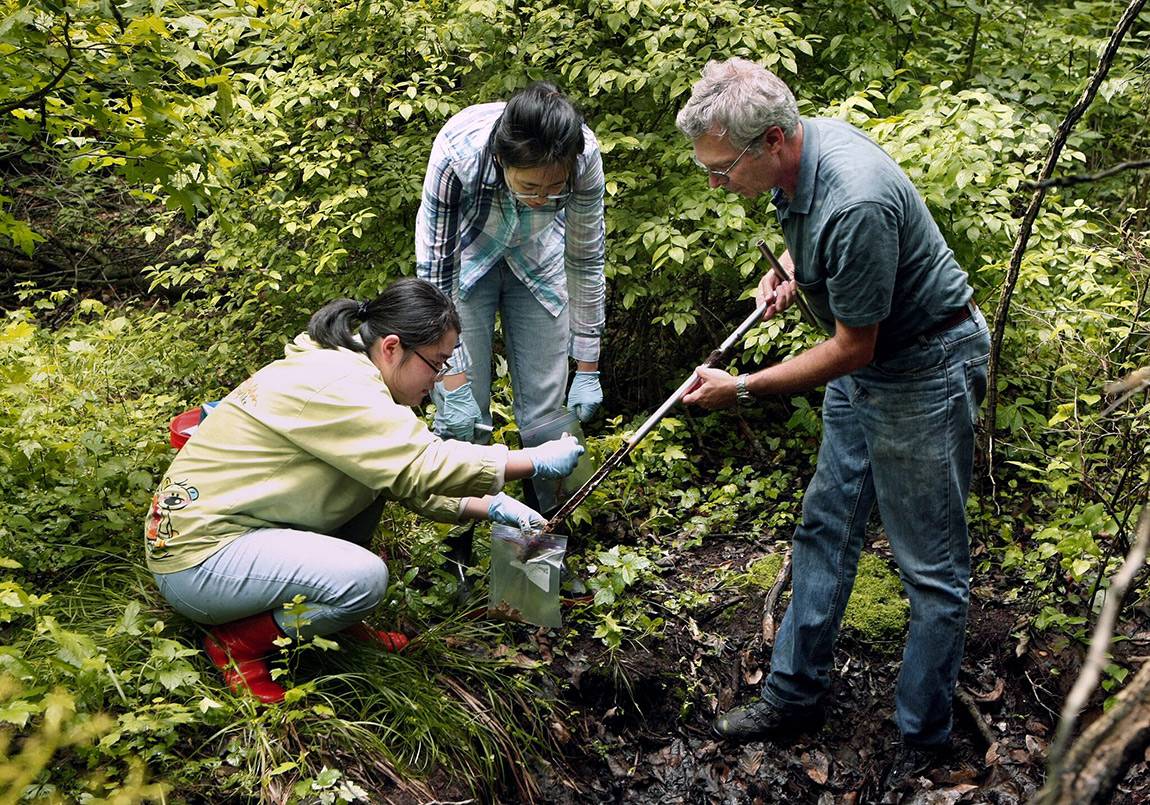 In November, the research team is scheduled to travel to Guangdong, China, to set up a series of tests of their method.

The initial goal is to build a mini treatment plant that handles just three to five liters of water, Jaffe said. "If we can show through calculations that it is possible to scale it up, the Chinese government plans to build a pilot plant," said Jaffe, who supported his initial research through the University's Project X Fund. "It's still basic research and it might not go anywhere, but we would like to see if it can be done."

In the meantime, the Princeton researchers have uncovered a number of promising new uses for the bacterium. For one, the bacterium is very effective at remediating two common groundwater pollutants — trichloroethylene and tetrachloroethylene.

"These are probably the most common organic pollutants at superfund sites," Jaffe said. The chemicals, once widely used in industry, are difficult to remove from the environment — "very recalcitrant," as Jaffe said.

The researchers are now exploring the bacterium's effectiveness at reducing pollutants including ring hydrocarbons, such as benzene, for which it can use the same enzyme it uses to insert oxygen into the ammonium molecule. Jaffe's group also is experimenting with cleanup of heavy metals including copper and uranium, both of which can be used by the bacterium in lieu of iron oxides and hence transformed into a different chemical state that might have less harmful properties.

"The bacterium is really amazing," Jaffe said. "It has opened many new avenues of research."

This article was originally published in the current issue of EQuad News, which highlights several bold ideas supported by University research funds.