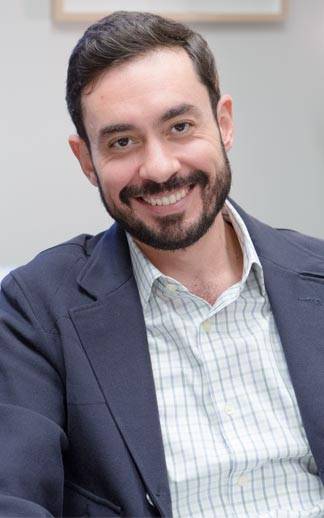 Since joining the Princeton faculty in 2011, Ali Valenzuela has investigated American electoral politics and political behavior with a focus on Latino public opinion and voter turnout, religion, race and ethnicity, and the politics of identity in the United States. Valenzuela, an assistant professor of politics, has worked, too, to help a range of students find their way in the classroom, at the University and in the world.

Early in the spring of her junior year at Princeton, Emilie Burke grew nervous about her plans for the summer as, one by one, her friends secured the kinds of high-powered internships she had hoped to land.

As the daughter of an immigrant mother and the first in her family to go to college, Burke worried that she lacked the connections she needed to secure an internship and get ahead. For advice, she turned to Ali Valenzuela, an assistant professor of politics, a mentor and the child of immigrants himself.

"We had a really honest conversation about socioeconomic class, realities and professionalism," said Burke, a member of the Class of 2015.

That summer, Burke completed a nonprofit consulting internship at the Rescue Mission of Trenton through the University's Community-Based Learning Initiative. Today, she is a Venture for America Fellow at a Baltimore startup that works to improve educational outcomes by combining educational, finance and technology tools.

"The conversation remains something I refer to often," Burke said. "I hope that someday I can provide the guidance and mentorship to some lost person the way Professor Valenzuela did for me."

Since joining the Princeton faculty in 2011, Valenzuela has investigated American electoral politics and political behavior with a focus on Latino public opinion and voter turnout, religion, race and ethnicity, and the politics of identity in the United States. Valenzuela, who is affiliated with Princeton's Center for the Study of Democratic Politics and the Program in Latino Studies, is working on a book that examines how election campaigns that focus on wooing Latino voters can influence how those voters view their own identity and its relationship to politics.

Valenzuela has worked, too, to help a range of students find their way in the classroom, at the University and in the world. He earned his bachelor's degree in political science from the University of California-Los Angeles and his Ph.D. in the field from Stanford University.

Valenzuela grew up in Los Angeles, where his parents settled after moving from Mexico. He points to his parents, now U.S. citizens and regular voters, as part of what sparked his academic interest in politics.

The heated political environment of California in the mid-1990s also shaped him, as he experienced firsthand the fight over Proposition 187 — a measure designed to crack down on illegal immigrants in the state. A rally against the measure, which was viewed by opponents as discriminatory and ultimately was ruled unconstitutional by the state supreme court, was his first political experience.

But it was a moment far from the public debates that sticks with Valenzuela most. As a teenager, he was running laps with his mother at a community college near his home. A woman they didn't know made an anti-immigrant comment to his mother, who was wearing a "No to 187" T-shirt. As his heart raced in nervousness, his mother calmly rebutted the woman's comments.

Now, issues of immigration, ethnicity, race and politics are his specialty.

"Everyone's background shapes the questions they ask and the topics they investigate," Valenzuela said. "It makes me happy that I'm able to pursue these questions that I'm close to because of my identity, but also because they have these important implications for how we understand American politics generally."

Christopher Achen, the Roger Williams Straus Professor of Social Sciences, said Valenzuela's skills in conducting political science research and his interest in social identities and religion are important to the Department of Politics.

"But perhaps his largest contribution is his work on Latino politics," Achen said. "Latinos are the largest American minority group and, in 2009, the University introduced a Program in Latino Studies. Ali gives the department a critical presence in that important initiative." 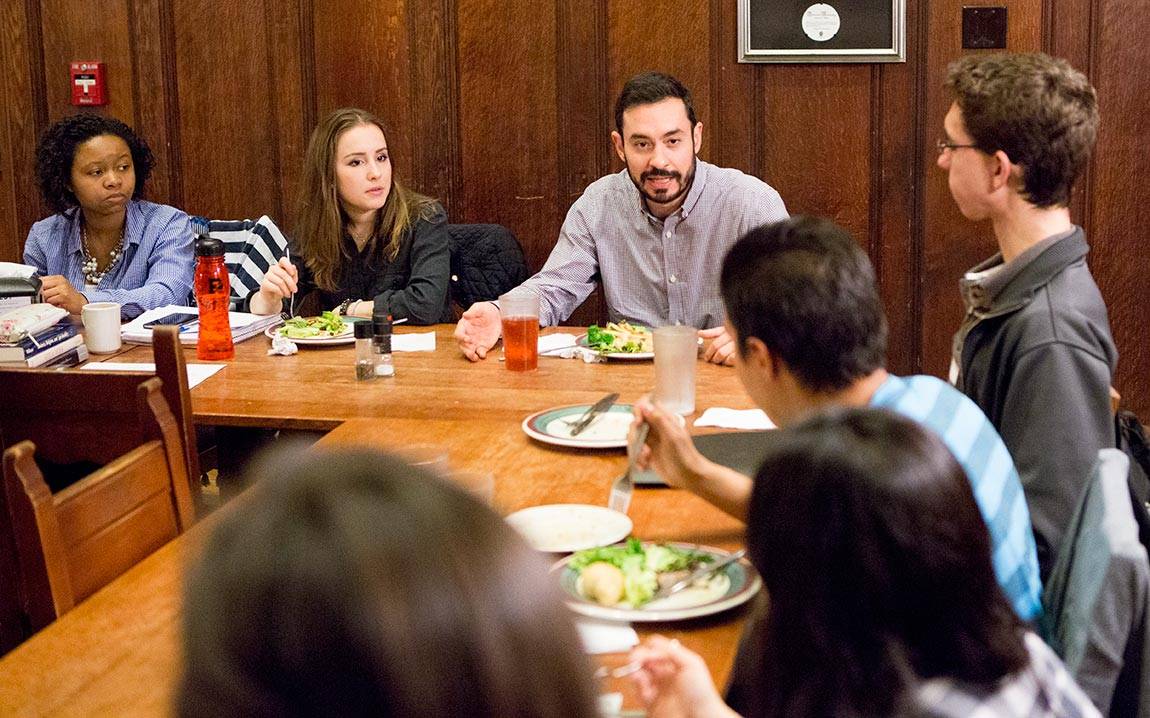 Valenzuela meets regularly over dinner in the private dining room of Rockefeller College with seniors whom he is advising on their theses. Valenzuela and the students take turns offering updates on their research, setting goals and resolving problems.

Valenzuela's current project examines the factors that lead candidates for public office to pursue the Latino vote and the effect those efforts have on how Latinos view their own identity.

"Politicians aren't out there trying to mobilize Hondurans and Guatemalans and Puerto Ricans," Valenzuela said. "In terms of electoral logic, it's much more beneficial for politicians and interest groups to mobilize the broader Latino community. Part of what I see in my research is that in geographic areas where this political competition is most intense is actually where Latinos are most willing to adopt a pan-ethnic Latino identity."

Valenzuela argues that political candidates target Latino voters based on two factors: the overall size of the Latino population and whether the race is competitive enough that Latino voters can make a difference in the outcome.

"In places where the Latino population is large enough and politics are competitive, both parties are going to be competing for this vote," he said.

Valenzuela also works to understand the political preferences of Latino voters. His research in this area is based in part on polls conducted three to four days before elections in 2010, 2012 and 2014 with Latino respondents who said they were "very" or "extremely" likely to vote.

Where Latino voters stand on the latter set of policies — economic and immigration issues — is the best predictor of how they will vote or identify with one of the two major political parties. That often benefits the Democratic Party, Valenzuela said.

"They feel the issue of immigration is so important and they connect that importance to who they want to choose in House elections, Senate elections and presidential elections," Valenzuela said.

That creates a challenge for the Republican Party, he said.

"The party that is struggling with the Hispanic vote recognizes very clearly that its own future prospects really depend on appealing to this constituency," he said. "On the other hand, a lot of the party's leaders are committed to doing what seems like the opposite — trying to win over conservative white voters. They're pursuing rhetorical and campaign strategies that to my perspective seem to be marginalizing the Latino community. To me, that seems like a mistake."

Vladimir Medenica, a graduate student in politics, said he always learns something new when working with Valenzuela.

"He's very open and creative in his research designs and use of novel techniques, which makes working with him fun and also helps expand the boundaries of traditional research," Medenica said. "His interest in political science, both substantive and methodological, is evident and contagious." 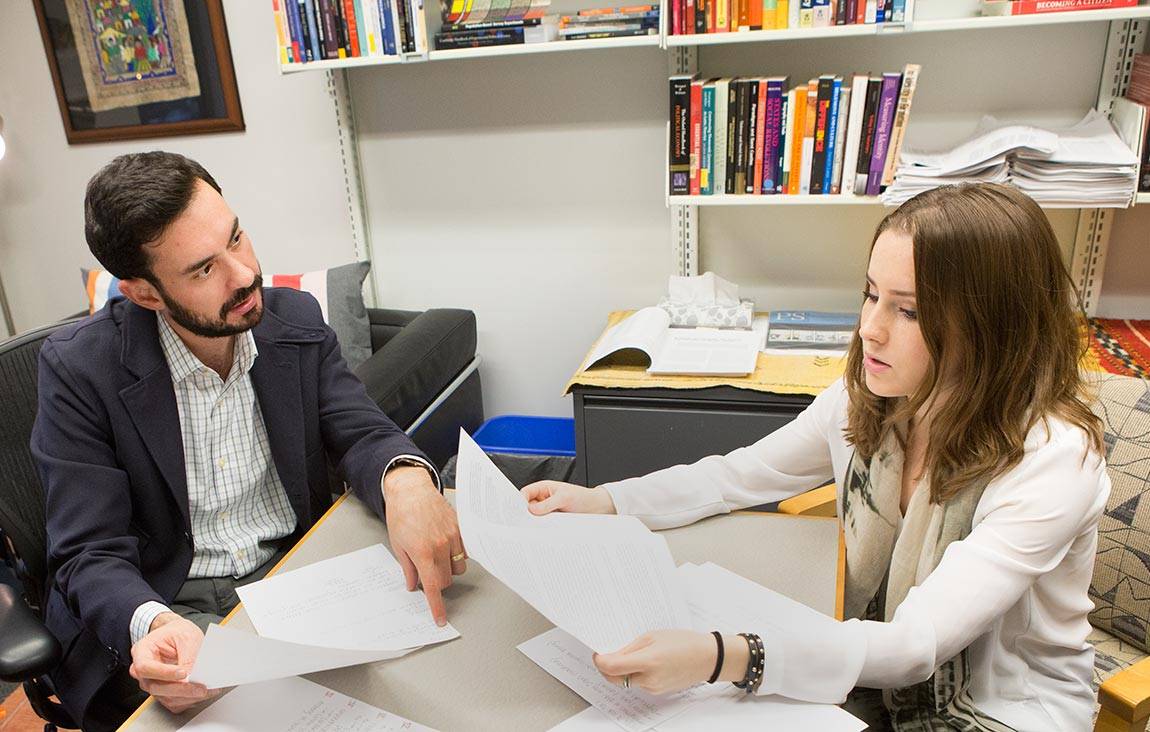 Valenzuela meets with senior Charlotte LeMaire in his Robertson Hall office to discuss her thesis project.

Valenzuela's research informs his work with students inside and outside the classroom. This semester, he is teaching an undergraduate course on the use of experimental methods in political science and a workshop on race, ethnicity and politics for juniors who are examining those issues as part of their independent work.

At a recent session of the experimental methods course, Valenzuela chatted with students about Vice President Joe Biden's announcement the day before that he wouldn't enter the presidential race, suggesting his decision was probably wise. Valenzuela's lecture looked back to the 1988 presidential campaign, when George H.W. Bush attacked Michael Dukakis by highlighting Willie Horton, a convict who didn't return from a prison furlough and committed a series of violent crimes while Dukakis was governor of Massachusetts.

Valenzuela also is putting the finishing touches on a new course he'll teach in the spring on immigration politics and policymaking. He plans for the course to include a trip to Washington, D.C., where students will have the opportunity to interview policymakers about their stance on immigration issues and how they represent constituents on this issue.

"I'm excited about it because I think it's a way to bridge the academic literature with what's going on in politics [today] and to think really hard about whether representatives are taking into account what we know about what voters believe when they design their representational strategies," he said.

Beyond the classroom, Valenzuela works with many students who are pursuing independent research in his field for their junior papers or senior thesis.

On a Tuesday night in the midst of midterms, Valenzuela met with five of his senior thesis advisees in the private dining room of Rockefeller College, where he is also a faculty adviser to freshmen and sophomores.

Over baked chicken, fries and salad, they took turns offering updates on their research and tackling challenges in their work. Valenzuela went first, saying he had met his writing goal for the week and hoped to complete a paper in the coming week.

As the seniors reviewed their progress, Valenzuela offered suggestions to the students on topics including time management, survey design and recruiting participants for a survey.

Justin Perez, a member of the Class of 2014, said he benefited greatly from that type of advice from Valenzuela.

"Professor Valenzuela was a great teacher who really took my ideas into account while formulating my independent work," said Perez, who is now a Teach for America participant in New Orleans. "He showed me relevant articles [and] great readings, and we would have talks about the current political landscape that really helped shape my JP [junior paper] and thesis. He was a great mentor as well who pointed me in the right direction to get thesis funding as well as to run large surveys online — things I would have never thought to do or would have been able to navigate on my own."

For Perez, Valenzuela's impact also went beyond those projects.

"Professor Valenzuela also was a good role model as a Latino in academia," Perez said. "The statistics for Latino graduation rates are low and they get even lower as the degrees become more advanced, so it was truly inspiring to work with a Latino who had made it this far."